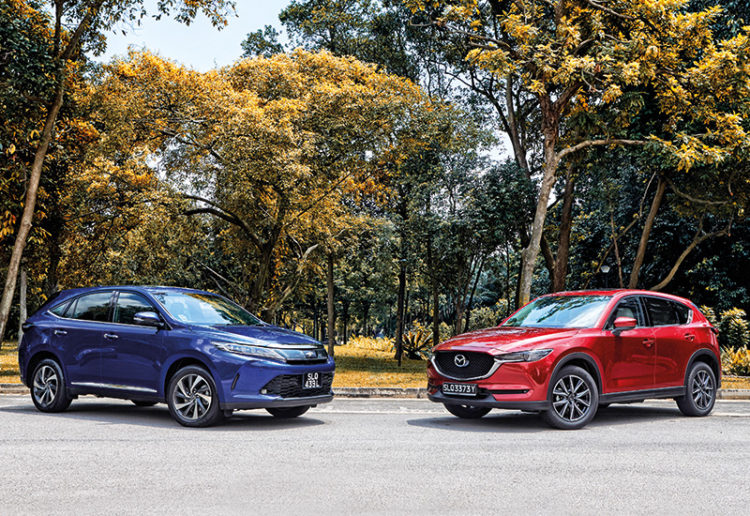 Birds of prey successfully capturing their elusive quarry are a sight to behold.

An owl silently slicing through the air as it nabs a field mouse, or an eagle grasping a poisonous and slippery sea snake in its talons, are nothing short of awe-inspiring.

Scenes such as these run through my mind as we line up the new 2-litre Toyota Harrier Turbo alongside the latest 2.5-litre Mazda CX-5.

It’s hard not to think of the Harrier as a bird of prey in this story. Its front badge is that of a hawk in flight, perhaps streaking towards its prey. 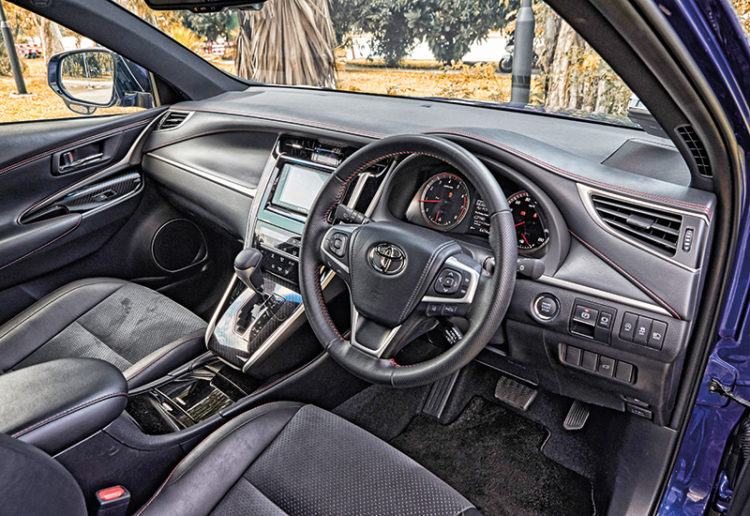 But three years ago, I’d never have made such an analogy about the Harrier. That’s because the only model then, which was only available through parallel importers, has a rather weedy, naturally aspirated 2-litre engine that produces 151bhp.

Although it is comfortable and has adequate power for our roads, it is more like a dove than a hawk, because it isn’t quick enough to catch any of its rivals.

The Harrier Turbo sold by Borneo Motors, however, is no dove. Beneath its bonnet is a turbocharged 2-litre engine (a detuned version of the one in the Lexus NX) that churns out 227bhp. This SUV certainly has performance potential. 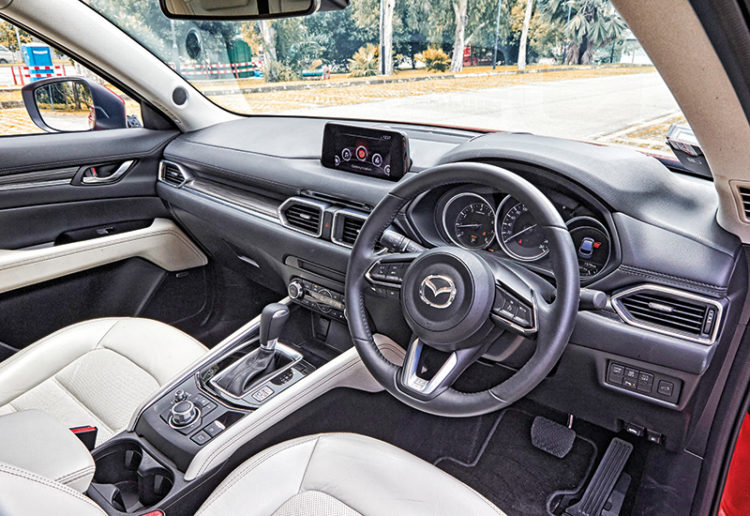 CX-5 cockpit’s layout is more user-friendly than the Harrier’s.

Those extra ponies are very welcome, especially if the Harrier intends to take on the Mazda CX-5.

The CX-5 may not be turbocharged, and “only” has 194bhp, but it is not to be underestimated. Because Mazda places a lot of emphasis on the driving experience, most of its models have well-sorted chassis and suspensions, and are relatively fun to drive.

However, you won’t find anything sporty about the CX-5’s cockpit, apart from the “correctly” positioned -/+ points (up to downshift and down to shift up) for the 6-speed automatic gearbox’s manual override function. 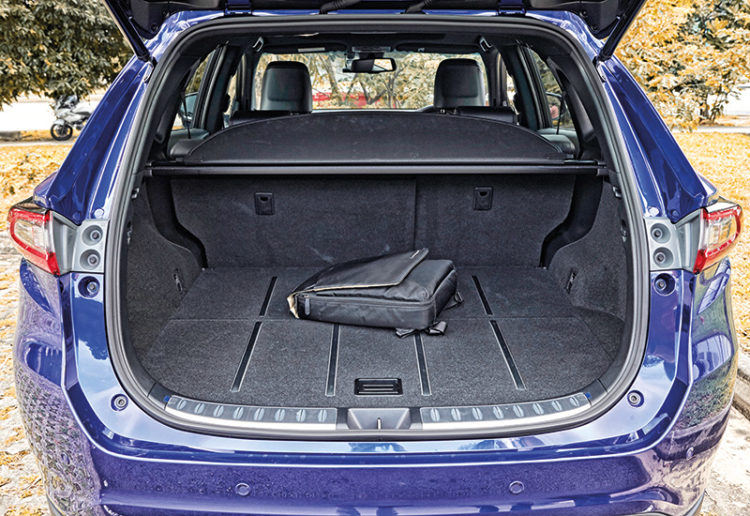 What the driver will enjoy more is the control layout, which is more ergonomic than the Harrier’s. The CX-5’s air-con dials, for instance, aren’t blocked by the gearshift lever, and its infotainment system, which is controlled by a rotary knob and touchscreen, is more intuitive as well.

The Harrier claws back some points, however, with its more upmarket fit and finish. It has cushier front seats, a leather-trimmed dashboard (something you’d only expect in luxury cars) and Lexus-like Optitron meters that make the CX-5’s instrument cluster look comparatively pedestrian.

SUVs must also cater to passengers in order to be deemed practical, and in this regard, the Harrier has the edge over the CX-5. 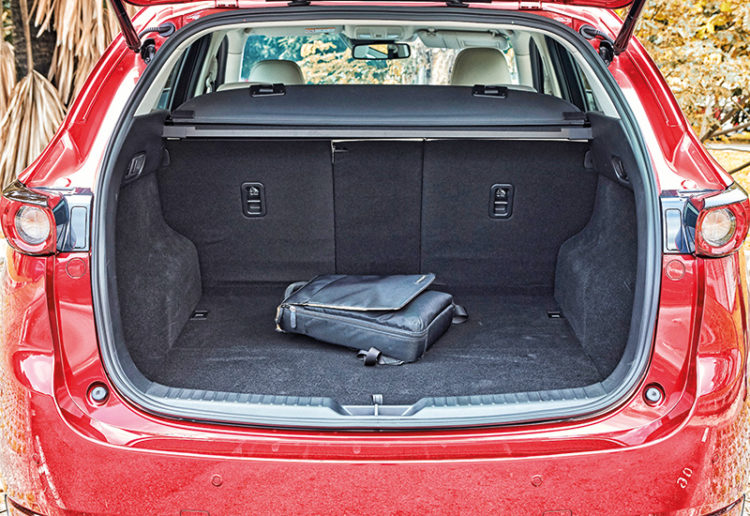 CX-5 boot is more flexible and useful than the Harrier’s.

Despite its 2660mm wheelbase being 40mm shorter than its Mazda rival’s, the Harrier’s rear bench is actually more spacious. It not only offers more legroom, but a flatter floor as well, making it easier for three adults to sit abreast.

The only downside to the Harrier’s rear accommodation is the lack of doorbins. Unlike passengers in the CX-5, occupants have to make do with the pockets behind the front seats. Fortunately, the Harrier’s 456-litre boot is marginally larger (by 14 litres) than the CX-5’s.

The CX-5’s boot, however, is more flexible than the Harrier’s. Thanks to its 40:20:40 split-folding rear seats (60:40 for the Harrier) and backrest release levers, the CX-5 makes it easier for owners to configure the cargo space to fit various load-hauling needs. 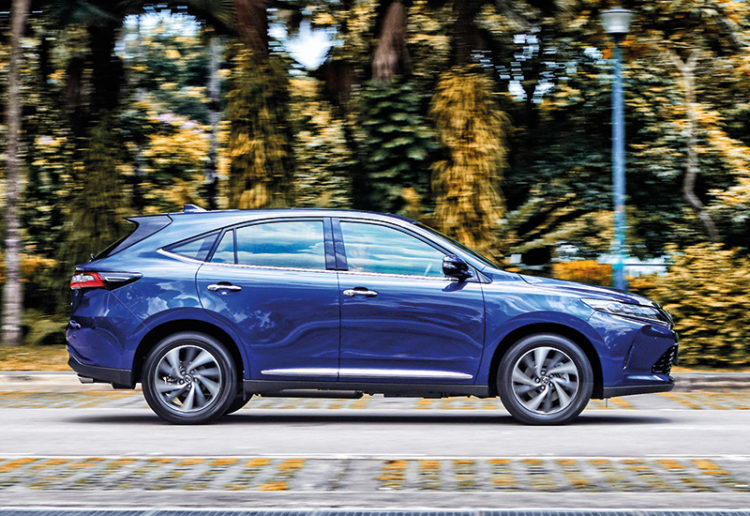 Hauling loads and folks comes naturally to the turbocharged Harrier, which not only delivers more power, but greater low-end torque, too. With 350Nm from just 1650rpm, the Harrier is quicker and smoother off the line than the CX-5, whose 257Nm only arrives at 3250rpm.

And with a century sprint time of 7.3 seconds, or 1.6 seconds faster than the CX-5, the Harrier driver can easily chase down and overtake the CX-5 pilot, too.

At this point, you might be thinking that the Harrier runs circles around the CX-5. But while it has the measure of its rival on expressways, the Toyota will have a harder time outrunning the Mazda once the roads turn twisty. 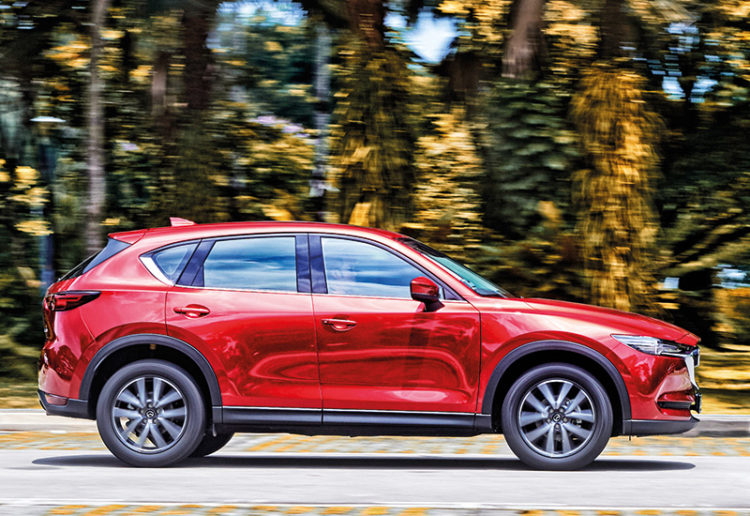 For the CX-5 truly impresses around corners. Thanks in part to the car’s firmer suspension, it doesn’t matter if the curves are short and tight, or long and sweeping, because this SUV was tuned to conquer them.

Even a mildly keen driver will be startled by this Mazda’s nimbleness and willingness to be hustled into bends. Even if you’re carrying a bit too much speed, you’ll feel very confident each time you nail the brake pedal and use the CX-5’s precise helm to command the nose to turn in.

Yes, you’ll feel the size of the body if you push harder. But for an SUV that doesn’t have a Porsche badge on it, this sort of agility is a pleasant surprise.

Equally surprising is the responsiveness of the CX-5’s powertrain, which is more eager than the Harrier’s. 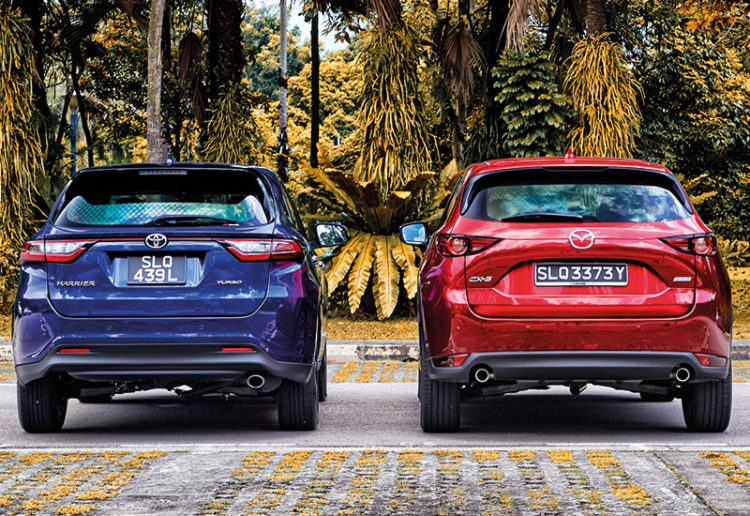 It needs to be worked hard to deliver its ponies, but every stab of the accelerator results in a jump in revs, and its gearbox is always quicker and more willing than the Harrier’s 6-speed auto to execute those much-needed downshifts.

Using its flexibility, eagerness and handling prowess, the CX-5 will be able to outmanoeuvre the Harrier – for a while.

But the hawk in this story, with its advantages in performance, spaciousness and practicality, will inevitably be able to hunt down its prey.