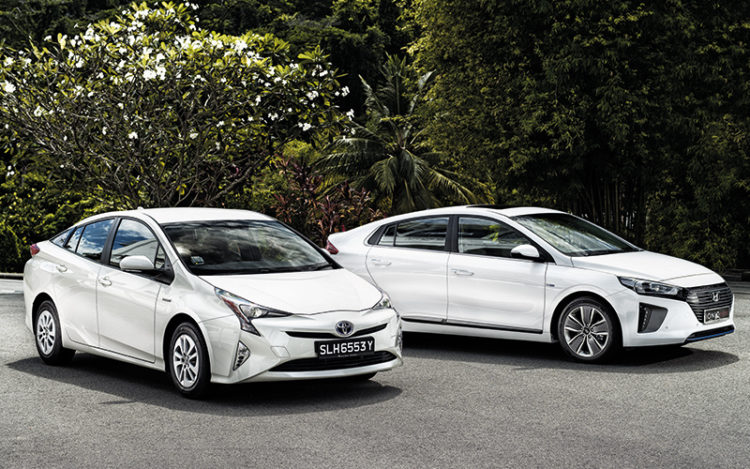 Taking on an established competitor is a Herculean task, for a contender must prove that he is not only up to the challenge – he must actually defeat said rival in order to make a name for himself.

If the challenger fails, he will probably be derided as unworthy, unprepared and foolish.

But if he’s lucky, history will remember him fondly and praise him for his valiant, albeit unsuccessful efforts.

Ruling the world of petrol-electric hybrids is the Toyota Prius, the undisputed king of “green” cars. 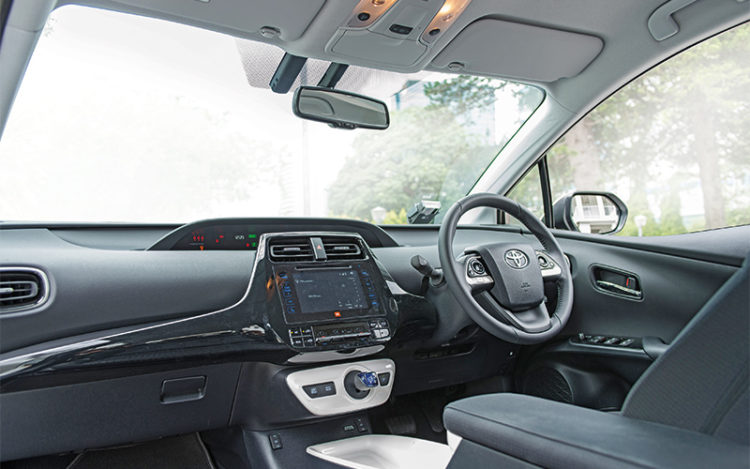 Introduced in 1997, the first-gen Prius is the world’s first mass-produced hybrid car. But back then, the automotive world was very different. Sports utility vehicles (SUVs) were just starting to grow in popularity, and terms such as “eco-conscious”, “green” and “environmentally friendly” weren’t buzzwords yet.

Indeed, many wondered why Toyota would even bother to make a hybrid, and an unattractive one at that. To petrolheads, the saloon looked like an appliance on wheels.

However, the Prius made its mark when it duly delivered high fuel efficiency and low emissions.

Since then, the Prius has grown from strength to strength. Its styling gradually improved, and its popularity with celebrities has given it a sheen that its competitors don’t enjoy. 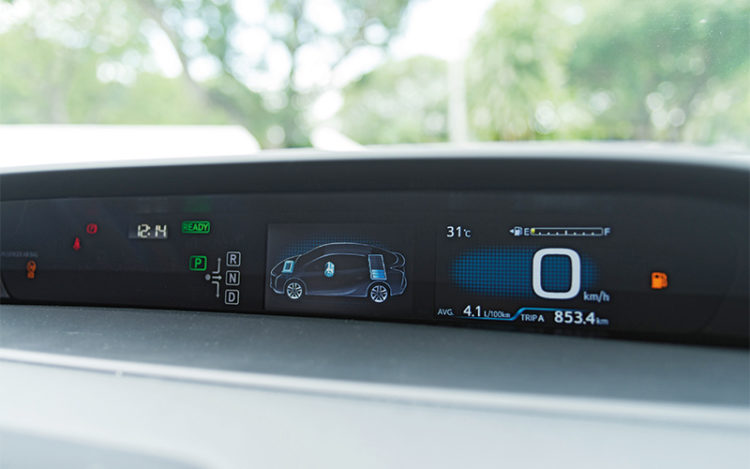 Now in its fourth generation, the Prius is more compelling than ever. In fact, it was awarded “Best 4-cylinder Hybrid” at the 2016 ST-Torque Awards.

Attempting to usurp the Prius’ throne is the Hyundai Ioniq, which, like its rival, is a fastback saloon. Introduced in 2016, the Ioniq is the Korean carmaker’s dedicated green machine, and is available as a pure electric vehicle (EV), plug-in petrol-electric hybrid or petrol-electric hybrid.

The first two variants, however, are only available in overseas markets. Only the third variant is sold in Singapore.

Now, convincing buyers that the Ioniq is better than (or at least on a par with) the Prius is like attempting to scale Mount Everest – for the first time. 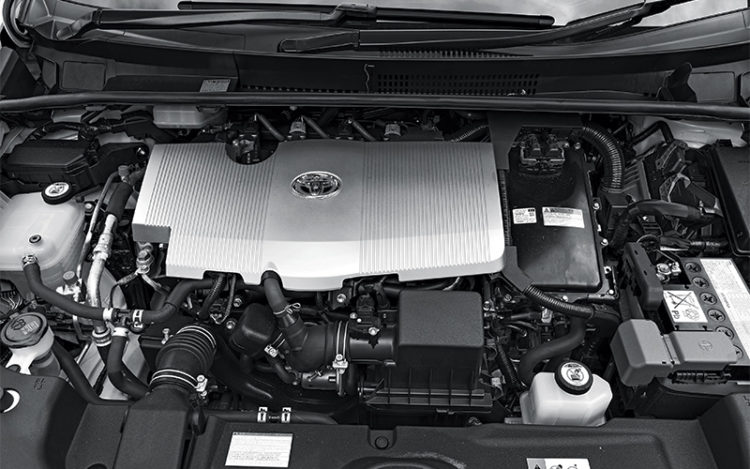 However, the Ioniq is well-prepared for its arduous climb. For starters, it does not have an offbeat design like the Prius. The Ioniq’s styling is more cohesive and coherent, with strong but clean lines defining its shape.

The Prius, on the other hand, has an eclectic mix of sharp angles and creases, a more pronounced wedge profile and a pair of distinctive vertical tail-lamps.

The Toyota’s overall look is one that polarises opinions, but that’s what happens when a car has road presence.

Inside, the Prius is also the one which will dazzle drivers. If you’ve never driven one before, the Prius’ cockpit could bewilder you. The centrally located instrument panel displays a variety of information, from speed to fuel consumption to drive mode. 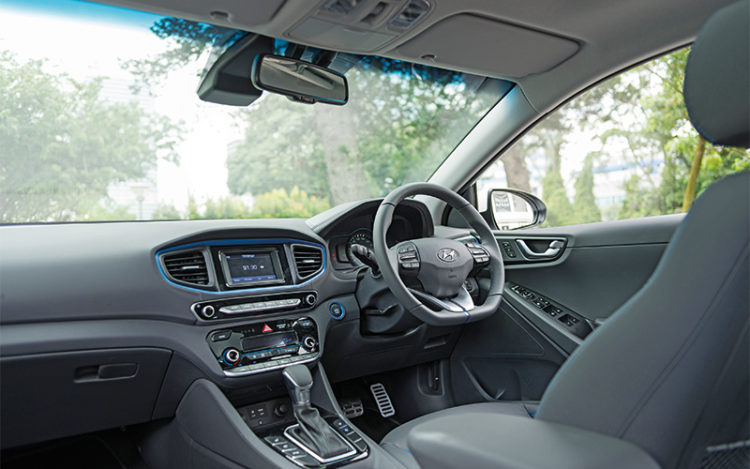 The coolest feature on the panel is the animated energy flow monitor, which lets drivers see how the power flows between the engine, electric motor, battery and front wheels. To a first-time hybrid driver, the experience will be fascinating.

Adding to a first-timer’s learning curve is the joystick-type gearshift lever. Although clearly labelled, the “P” (Park) button beside the lever takes some getting used to.

Overall, the Prius’ cockpit is well-constructed. In particular, I like the “Bakelite-trimmed” tray area on the centre console for loose items.

Compared to the Prius, the Ioniq’s cockpit is much more straightforward. The instrument cluster, for one, is directly in front of the driver, and won’t feel as intimidating to a first-time hybrid driver. Unlike the Prius’ “joystick”, the Ioniq’s gearlever is a conventional one, and accords better grip with its wide knob. Also offering a positive grip is the steering wheel, whose flat bottom and larger thumbrests make it preferable to the Prius’.

One of the Ioniq’s coolest features is its built-in wireless charger, which can recharge Qi-enabled devices. If your smartphone doesn’t have this function, there is still a 12-volt socket and USB port.

Also sure to please drivers is the aforementioned instrument panel. Because it is more compact than the Prius’, the information isn’t spread out, and I find it easier to focus on monitoring my speed.

Both the Prius and Ioniq have wheelbase lengths of 2700mm, but the Prius has better packaging and is roomier. 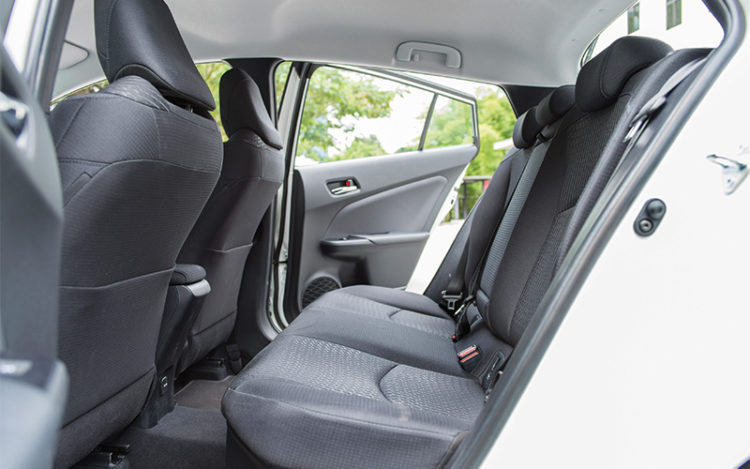 Prius’ backseat is roomier than the Ioniq’s.

Backseat occupants also have access to a 12-volt socket, but most loose items will have to be carried in hand, as there are cupholders instead of doorbins.

Although it has less space, the Ioniq’s rear bench is more comfortable and practical, thanks to the rear air-con vents and proper doorbins.

Key to the Prius’ success as the world’s most popular hybrid is its powertrain. The latest model is equipped with a 1.8-litre 4-cylinder engine that’s paired to an electric motor, which in turn is powered by a nickel-metal hydride battery.

Although the powertrain is carried over from the preceding model, Toyota claims it is now 10 percent more efficient and able to cover an average of 27km per litre of unleaded, or 2km further than before. 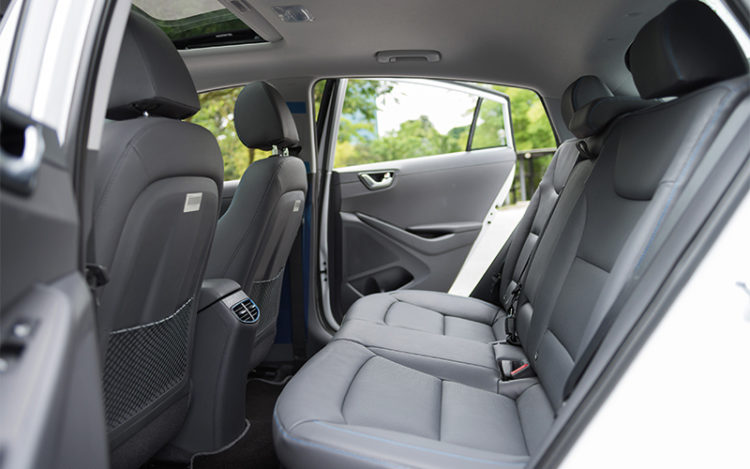 Ioniq’s backseat is more comfortable and practical than the Prius’.

The efficiency gain wouldn’t have been possible without some “losses”. The electric motor, for instance, is 20 percent lighter than before, while the power control unit, which is now 30 percent smaller, is supposedly more effective.

The Prius’ overall output is smaller, too. The petrol engine now produces 98bhp on its own (down 2bhp), while the total system output has dropped from 136bhp to 120bhp.

Naturally, the new Prius is slightly slower than the old one, taking 11 seconds, or 0.6 of a second longer, to go from zero to 100km/h. However, as we shall see later, these figures don’t tell the whole performance story.

While the Prius’ drivetrain is a proven one, it’ll be a few years more before we can say the same about the Ioniq’s, which consists of a 1.6-litre 4-pot, electric motor and lithium-ion battery pack. 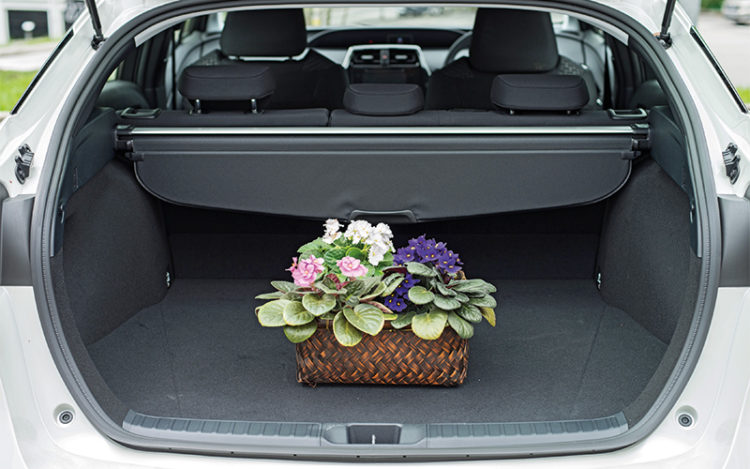 Prius’ 502-litre boot has a bigger aperture than the Ioniq’s.

The Ioniq’s petrol engine is the more powerful unit, delivering 105bhp alone. Together with the electric motor, there’s 139bhp and 147Nm for the driver to play with.

Although the Ioniq’s zero-to-100km/h acceleration is a bit slower than the Prius’, the Hyundai feels more responsive than its rival. Every flex of my right foot is immediately rewarded by forward motion, and the brake pedal provides an even more assured feel.

Undoubtedly enhancing the Ioniq’s responsiveness is its 6-speed dual-clutch gearbox, which is quick and seamless. And the gearbox doesn’t jerk at all during “creeping” manoevures or slow traffic situations.

And when I want to indulge in some “dynamic” manoeuvres, the Ioniq is eager to respond. 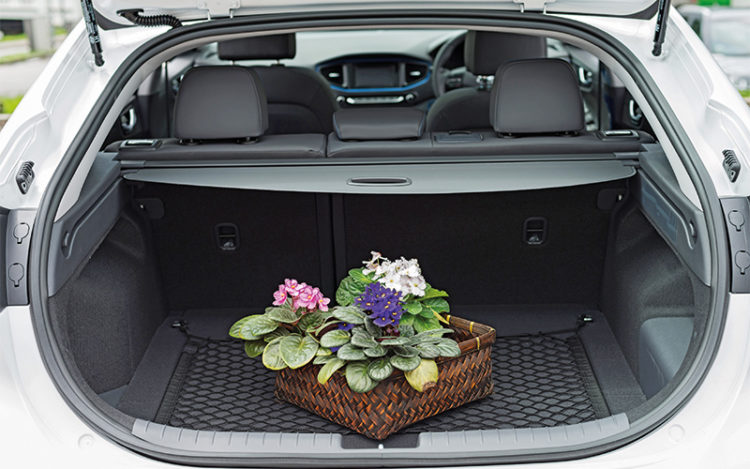 When I select “S” mode, the only other driving mode available in the Ioniq, the fastback accelerates even more urgently, holding on to each forward ratio longer than a hybrid really should.

Interestingly, “S” mode also makes the instrument panel look sportier – the speedometer is swopped for a tachometer, with velocity readouts in the centre.

The Ioniq also offers manual override which, in the context of an eco-friendly car, seems out of place. But I’m certainly not complaining, especially if it lets me have a bit of fun.

There’s no respite from green motoring in the Prius, though, which has a continuously variable transmission without any manual override. There’s a “Sport” setting, but it doesn’t make the car feel as eager as the Ioniq. 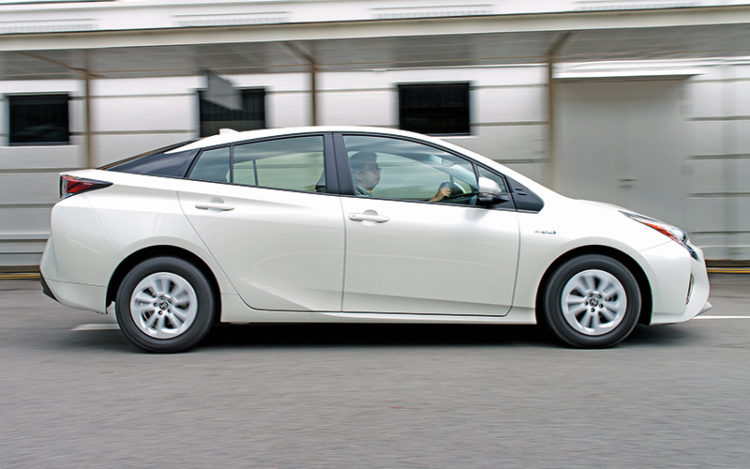 At any rate, the Prius’ purpose is to be eco-friendly, and it accomplishes that with aplomb.

Over a weekend of running errands that required me to drive from one end of the island to the other, I averaged an amazing 22km per litre – just 5km per litre off the claimed figure. With the car’s 43-litre tank, I would have had a theoretical range of 946km.

The Ioniq’s average fuel consumption of 25.6km per litre isn’t far off the Prius’ mark, and the 45-litre tank gives it a potential range of 1152km. However, because I found the Ioniq’s performance more to my liking, I only managed an average of 19km per litre.

Indeed, between the two fastbacks, I prefer the Ioniq’s slightly stiffer ride and better handling, as opposed to the Prius’ more pliant disposition and tendency to lean around corners. 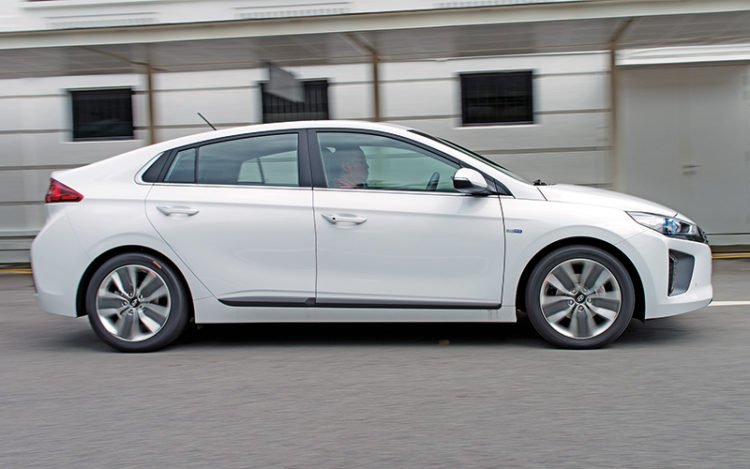 The Ioniq is compelling because it is more user-friendly, and it would be easier for a non-hybrid driver to figure out.

At the same time, I’m also impressed by the Prius because it has raised the (salad) bar even higher than before.

When it comes to green motoring, the Prius is still the hybrid to beat.

However, I am more convinced by the Ioniq’s design and driveability. The Prius’ styling is a bit much for me, and as a petrolhead, I would gladly trade a bit of ride comfort for nimbleness around bends. 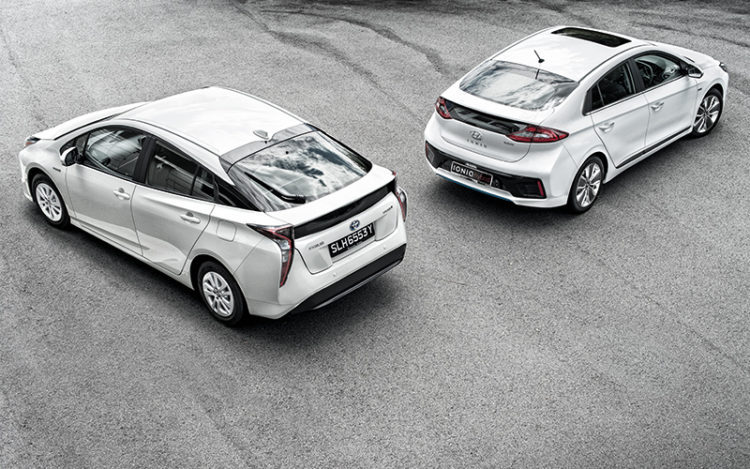 In its maiden attempt to “scale Mount Everest”, the Ioniq has nearly reached the summit.

The Hyundai’s only shortcomings, really, are that it isn’t as roomy or as frugal as the Prius.

Had the Ioniq matched the Prius in these two aspects, then the outcome of this white-hot green battle would have been very different indeed.