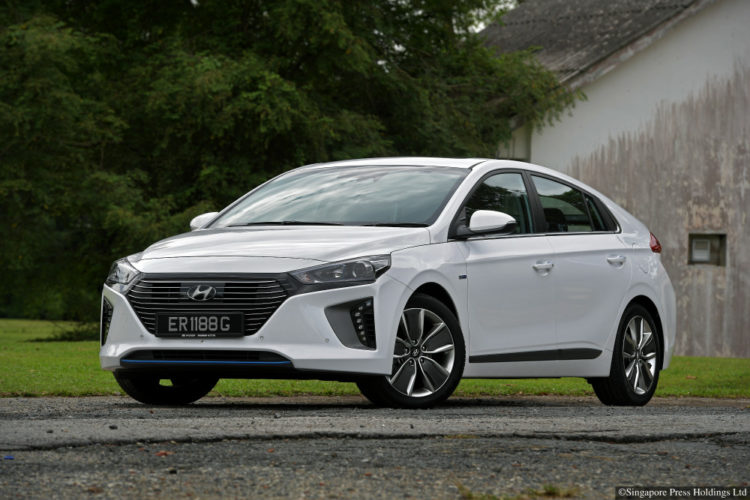 Hyundai’s first hybrid, when viewed from the side, bears some resemblance to Tesla’s Model S.

But unlike the fully electric Model S, the petrol-electric Hyundai Ioniq qualifies for the top-tier Carbon Emissions-based Vehicle Scheme (CEVS) rebate of $30,000.

A new Model S brought in last year qualified for only $10,000 in CEVS rebate.

That the Ioniq is deemed cleaner than the Model S must be good news to motorists who want to be carbon-lite. That the Hyundai’s price is only a fraction of the Tesla’s is doubly good news for buyers who want a car that is wallet-lite.

(Spelling “light” as “lite” seems to be fashionable these days. If you have not noticed, we are told, at least 15 times a week, that Singapore needs to be “car-lite”.)

Which is probably why its official consumption figure of 25.6km per litre is shy of the Prius’ 27km per litre.

In real life, though, the difference is bigger. The Prius clocked 21.7km per litre, while the Ioniq clocked 18.5km per litre.

This is strange, since the Kia Niro, which has the same hybrid drivetrain as the Ioniq, posted a real- world economy of 20.4km per litre. 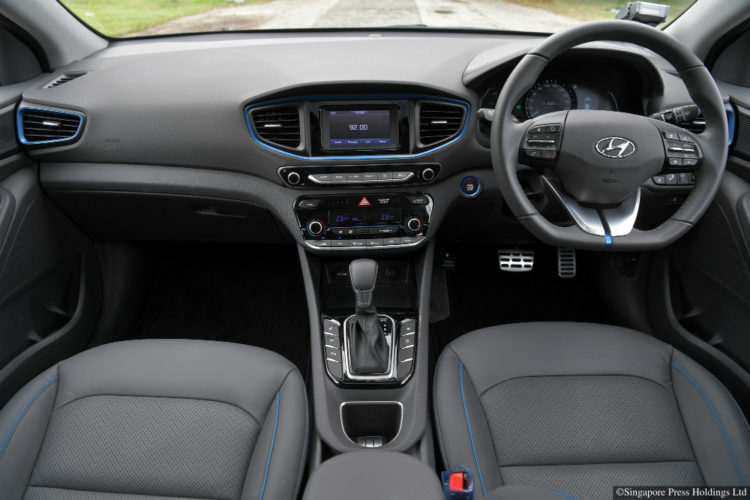 The Hyundai Ioniq is furnished and finished like a premium model.

From an efficiency point of view, the Hyundai is still significantly better than non-hybrid models of a similar size. The Hyundai Elantra, for instance, clocked a real-world consumption figure of 11.1km/L and the Toyota Corolla, 12.5km/L.

More than that, the Ioniq is furnished and finished like a premium model. You will find plenty of leather, chrome and soft tactile plastics in the cabin.

Gadgets abound too. You get ventilated front seats, dual-zone climate control, adaptive cruise control, a wireless mobile phone charger (which seems to work only with the Samsung S7), memory seat for the driver, a sunroof, a blindspot monitor and lane-keeping assistance.

The last feature is more bother than boon. It gives out an audio warning if the car veers off lane. And it makes small corrections to the steering to nudge the driver back on course.

Not only is the steering correction a little spooky and irritating, it is also not really effective. It does not pull the vehicle back into lane by itself. It only nudges the driver into action.

Well, if a driver cannot keep in lane by himself, no amount of nudging will help. Thankfully, this driving aid can be switched off easily.

Driven without it, the Ioniq proves to be a competent car with a comfort-biased chassis and a drivetrain with a good blend of power and efficiency.

It is not quite as refined or as engaging as the Prius, but it is also not quite as pricey (despite its long list of premium features). For many consumers, the price-lite option is usually preferred.

If that is so, should Hyundai have left out the bells and whistles and made its first hybrid car here even more affordable? Because right now, it would seem the carmaker is sending mixed signals.