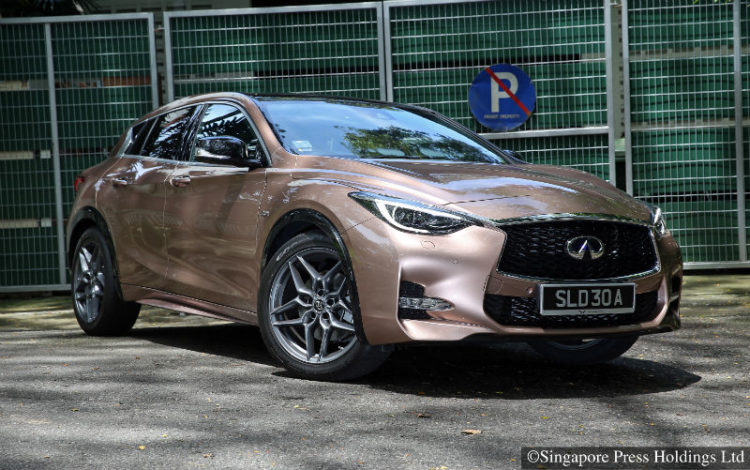 The Japanese brand is no big threat to its three-pointed star marque, even if it is Nissan’s luxury arm.

It is probably right. In the bigger scheme of things, Infiniti is unlikely to become a serious competitor in the near term.

But in isolated cases, the Japanese brand is showing plenty of promise. Take the new Infiniti Q30, for instance. This compact crossover is a sweeter ride than its German parts donor, the Mercedes-Benz GLA.

And it looks better and classier too. Next to its sporty silhouette, the GLA looks like a shapeless blob.

The evocative creases, daring folds and impossible angles on its sheetmetal make the Q30 something of a star on the tarmac. It gets more than its fair share of stares from pedestrians and other road users.

In fact, it is the most special-looking car in the Infiniti line-up now.

Its outstanding design continues inside the car. The cockpit is modern and unfussy, with a luxurious feel underscored by fluid lines, top-notch build quality and fine materials.

Again, it feels a tad more special than the GLA’s interior, even if the switchgear and functions are a direct transplant from the compact Mercedes-Benz crossover.

Its delectable form aside, the Q30 surpasses expectations elsewhere. It offers plenty of cabin space for a smallish vehicle. By folding the rear seats, you will be able to fit a full-size mountain bike on board rather effortlessly – without removing its front wheel.

The Q30 is of a similar size as the Mercedes-Benz GLA, but it has slightly longer overhangs, which make it sleeker-looking. The Sport version, which sits closer to the road than the Premium version, actually comes across more like a big hatchback than a crossover.

And it drives more like a hot hatch too. The Sport version is equipped with a turbocharged 2-litre engine producing 208bhp and 350Nm. Regulated by a seven-speed dual-clutch gearbox, power is delivered to all four wheels.

The car is up to 80kg heavier than the front-wheel-drive GLA250 and that weight penalty shows up in its century sprint. But behind the wheel, it feels none the worse for it.

The Q30 is a joy to drive. It has a responsive throttle, linear power delivery and adequate output across the rev range. These translate to smooth, predictable and powerful acceleration.

Most impressive is its suspension. The Infiniti offers an extraordinarily cushy ride and is yet very competent around fast corners. Even when it encounters particularly nasty speed regulators, the cabin is adequately insulated and there is nary a rattle.

This level of refinement sets it apart not only from the GLA, but also from any other car in its segment.

Things which do not gel with its premium image include a partially keyless system (shoving the bulbous key into the ignition slot is still required) and a non-motorised tailgate (which is rather heavy).

It shares Mercedes’ easy-to-use cruise control, but it does not have the German maker’s convenient Hold brake function. Alas, the lower portion of the windscreen is prone to fogging up – a trait Mercedes has been known for.

All in all, the Q30 is an accomplished car in its own right, despite having borrowed heavily from an unlikely rival.