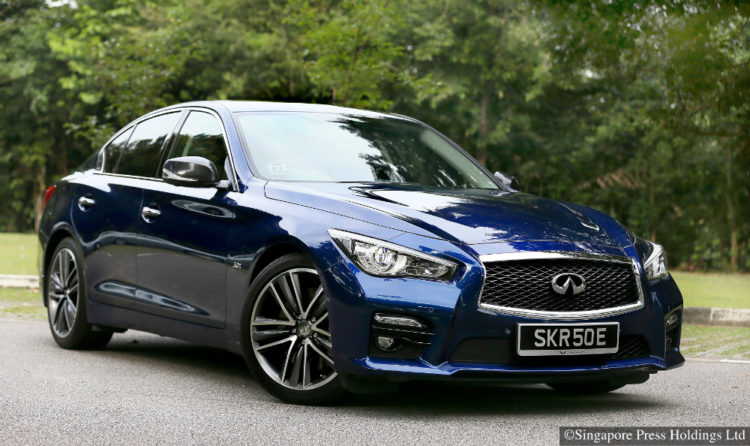 Under most circumstances, a car with 400bhp should make you at least a little tingly with anticipation, excitement and then, gratification.

The Infiniti Q50 Red Sport is powered by a new turbocharged 3-litre V6 from Nissan that churns out 400bhp and 475Nm. But at the wheel, you feel no tingly sensation. Not even the slightest buzz. In fact, the car leaves you a little cold.

It is puzzling. It is not as if the fortified sedan – the swiftest in the Infiniti fold – lacks performance. With a 5.1-second century sprint, it is anything but sluggish.

Even in Eco drive mode, the range-topping Q50 has no trouble keeping up with traffic – as expected of a 400bhp bruiser.

But for all its firepower, the Red Sport fails to hit the spot. It is brisk, but not exactly bristling or breezy. This could be attributed to its non-linear throttle response. Somewhere in the middle, you have to increase foot pressure to get past an invisible barrier.

Selecting the most aggressive Sport+ mode improves things somewhat, but you end up being a little frustrated because there is just not enough room here for the car to exploit its potential.

And you feel this potential seething beneath the surface. After all, the car is propelled by an engine that could find its way into future Nissan Z cars.

But in this mode, you also end up with a gearbox that does not go beyond fourth gear most of the time.

Surprisingly, the seven-speed autobox remains satiny and seamless throughout. Even if you drop three cogs manually, the gearbox is not flustered. 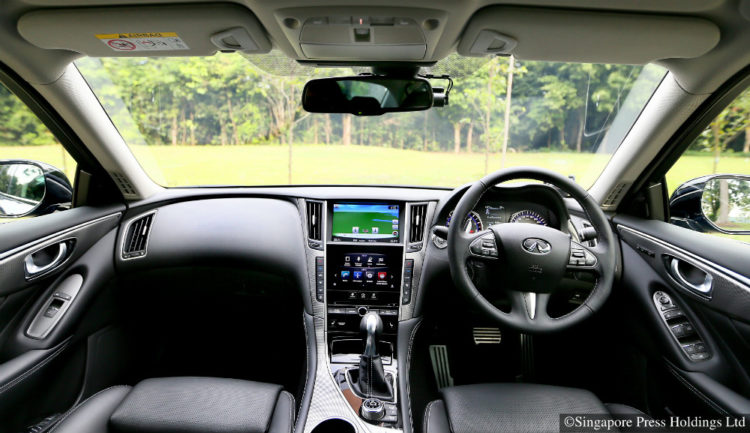 Indeed, the overall refinement of the car is remarkable. Noise insulation is superb. But Infiniti could have engineered the Q50 to allow some engine and exhaust notes to permeate. As it is, the car is devoid of aural entertainment other than what you get from its crisp hi-fi system.

Again, that may have contributed to its unemotional state. This, in turn, does little to encourage you to drive with enthusiasm. When the car is so clinical, you just want to sit back and relax.

On that front, the Q50 delivers. Its ride is clearly comfort-biased. For the first time, Infiniti offers what it calls Dynamic Digital Suspension with electronically adjustable dampers.

But as said, there is little motivation for you to choose a sportier setting.

The same goes for the car’s adaptive steering, which is nearly as weighty as an unassisted system when in its sportiest mode.

Talking about steering, the Q50’s steer-by-wire system feels a little strange whenever you try to lock it. Instead of locking, the extreme ends feel spongy, as if there is still some room to go.

There is another strange thing about the test-car. The front parking sensors do not emit the continuous beeping that drivers associate with “stop, don’t go further”. They continue to beep merrily. Thank goodness then for the car’s all-round camera system.

The strangest thing, though, is how such a powerful car can come across feeling merely like a slightly sportier Camry.