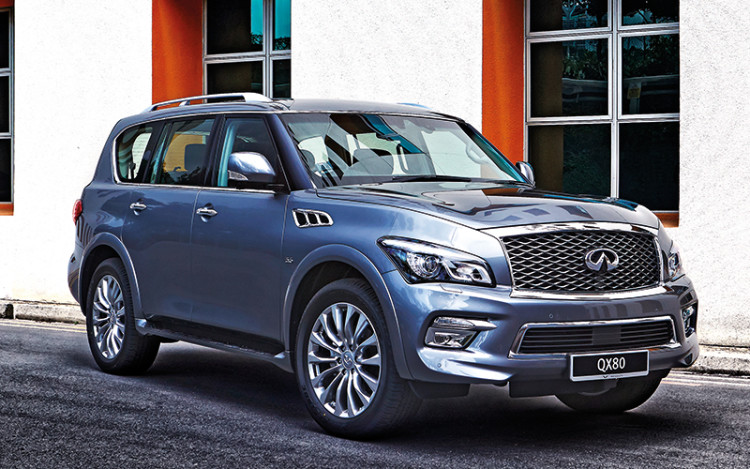 The Queen Mary 2 is a 345m-long ocean liner, once the largest in the world. Resplendent with heavy wood finishes, glimmering chandeliers and opulent accommodation on every deck, it is a wet dream boat for privileged passengers.

If you’ve been on a luxury cruise and longed to drive the ship home, your wish is granted…

Infiniti has rolled out the QX80, a luxury SUV. Standing at 1.95m tall and 2.03m wide, and weighing over 2.8 tonnes, the car is ground-shaking, while not exactly groundbreaking.

It was first launched in 2011, selling predominantly in the US market where malls and carparks are sprawling, distances are epic, petrol is cheap and road tax isn’t pegged to engine capacity.

In the country that gave us the Big Mac, Infiniti’s QX80 does titanic battle with Cadillac’s Escalade, Lexus’ LX and GMC’s Yukon. These are all unfamiliar names to the local consciousness, bar the occasional mention in hip-hop songs and random appearances in by-the-dozen CIA thrillers, tearing through the deserts. The QX80’s case for local tastes, therefore, takes a little explaining. 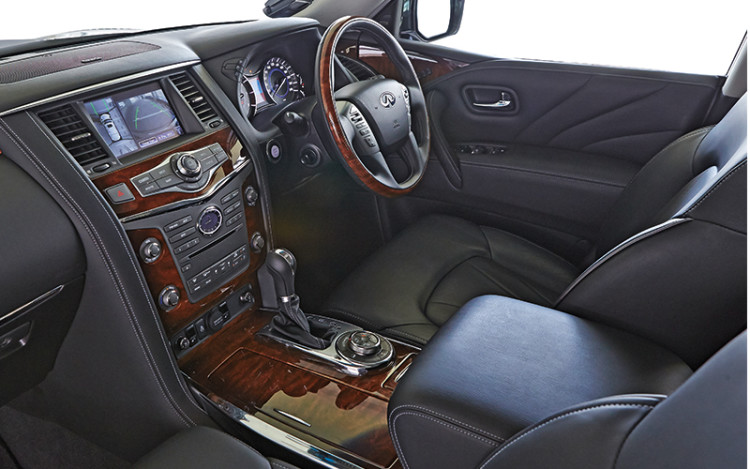 Infiniti had an S-Class-shaped hole atop its model range, and has, therefore, (over)filled it with this automobile.

Strictly speaking, the car exists in a class of one, with its closest competitors by type being the Land Rover Range Rover and the Volvo XC90. Both rivals are noticeably smaller, and the Rangie is considerably costlier (half a million dollars for the diesel 3-litre version). Infiniti thus hopes to draw customers who are cross-shopping comparably priced luxury saloons. In other words, the QX80 sees your puny S-Class and squishes it.

I clamber up to explore the cavernous interior – everything is pillowy soft to the touch and sumptuous in finish. Sitting in the showroom poking at the fittings, you’ll not realise that Nissan has a plebeian version of this mighty Infiniti called Patrol, which isn’t sold in Singapore.

Look over the copious leather and there is always that wonderful towering view. But in an era when the XC90 has an all-digital instrument display, the design of the QX80’s dashboard seems slightly dated.

The fascia is very button-heavy, the touchscreen infotainment system carries third-party navigation software, and the secondary displays are in pixelated monochrome.

The vehicle’s interior space is naturally abundant, and even the rearmost row is no penance for adults who, unlike in a BMW X5, can sit up straight without brushing the headliner.

Towkays used to the decadence of “captain chairs” found in the Toyota Alphard will find similar accommodation in the second row of the QX80, but the seats there cannot slide. 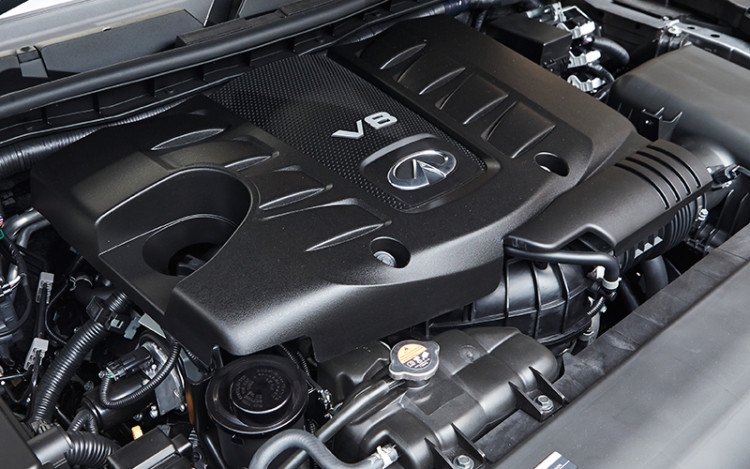 Entertainment is provided by individual LCD screens mounted behind the front headrests for the full airliner experience when your journey takes you up to Malaysia, and lasts longer than an episode of Spongebob Squarepants.

The entertainment system is capable of accepting DVD and even Playstation input, but not that of your iPhone.

For Ikea forays, the cargo capacity is generous with the seats up and enormous with the rear seatbacks folded. But they fold/unfold via a painfully slow electronic mechanism.

Power out onto the road and the experience is empowering. There are few vehicles that can make a Range Rover feel small, but smugly I sit behind the wheel of the QX80, looking at the Rangie’s roof. One poor MINI Cooper driver hovered timidly behind, not daring to overtake lest I flatten it with the car. Everywhere I go is a game of “Will It Fit?”

Despite a steering that serenely offers virtually zero tactile feedback, it is easy to play when everything can be directed by line of sight.

To help you avoid demolishing your neighbour’s house, the vehicle comes equipped with a 360-degree camera system, which works effectively as advertised and displays a stitched-together bird’s-eye view of the car while parking. HDB multi-storey carparks are best left alone, however. 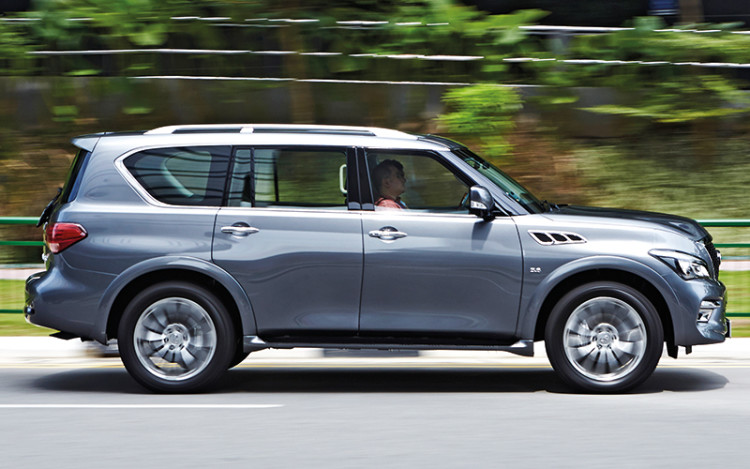 Like the aforementioned Cadillac and GMC “trucks”, as SUVs are referred to in the Land of the Free, the Infiniti has a ladder-frame chassis as its defining mechanical trait.

Such a construction is popular with vehicles of a burlier disposition, and notable brethren besides giant beasts of burden are the culturally iconic Ford Crown Victoria police cruisers and New York City taxis.

Body-on-frame designs offer easier repairability and permit greater torsion for the rigours of jungle bashing, but at the detriment of lightness and on-road manners.

For this reason, newer crossovers and road-biased SUVs have largely transitioned to unibodies, including even the venerable Range Rover.

Concentrating hard, I just about detect the QX80’s body-on-frame construction over harsher terrain as the structure gently reverberates over larger bumps and humps.

Not that I throw this behemoth around particularly violently, but the chassis dislikes aggressive driving, taking time to settle from its pronounced pitching movements, and moving without the granite-like solidity and cohesiveness of a Rangie driven quickly. 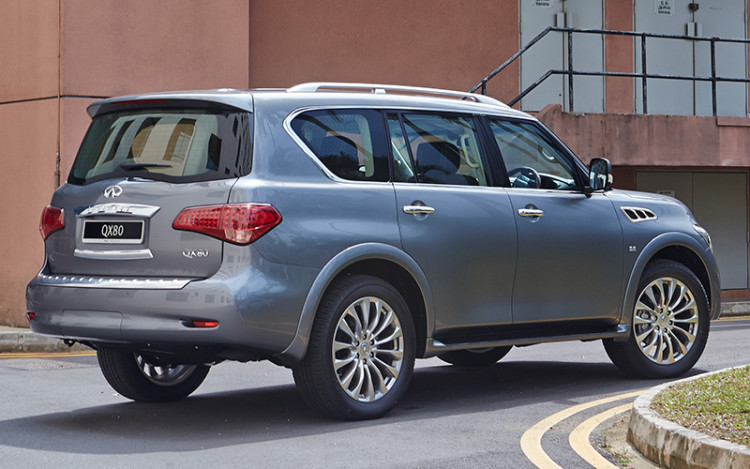 Yet the prodigious wheelbase and suspension travel mean that comfort and serenity are rarely compromised. Brief expressway jaunts are consumed comfortably and rapidly, while traffic jams lose their oppressiveness when one can see right over them.

The 5.6-litre 400bhp V8 also provides effortless and accurate propulsion, while the 7-speed automatic gearbox does a smooth job of disguising its very existence on the go.

This car is not the last word in modernity, sophistication or versatility, but neither does it disgrace itself in the SUV segment. It remains a perfectly credible luxury vehicle. What it does best, however, is be utterly, massively and hilariously unbeatable in size.

To dominate one’s unique selling proposition so emphatically is, in today’s crowded market, a rare achievement that’s charming in itself. At about $400,000, the Infiniti QX80 can even be considered good value.