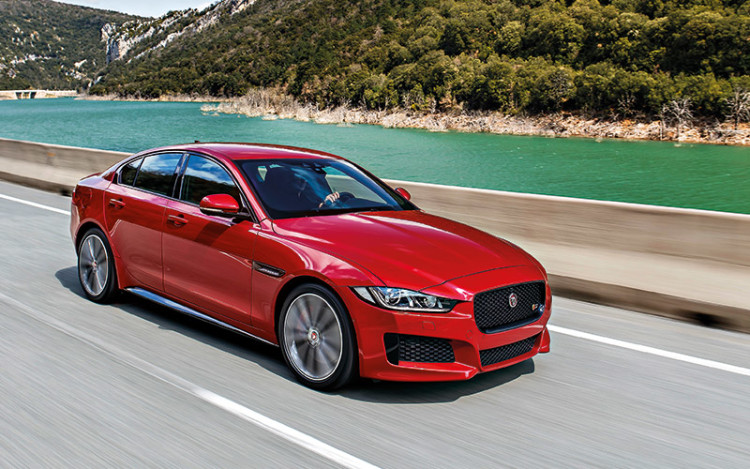 Remember the Jaguar X-Type? Neither does Jaguar, it seems. At the media launch of the new XE in Spain, no mention was made of the British firm’s last contender in the compact executive saloon segment – which goes to show the impact, or lack thereof, made by the Ford-derived X-Type.

After almost £2 billion ($4.2 billion) of investment that includes two new factories, 2300 new jobs, a new vehicle architecture and two new engines, Jaguar is back for another stab at a segment currently dominated by the Germans – BMW with its 3 Series, Mercedes with its C-Class and Audi with its A4.

On paper at least, the signs are promising. More than 75 percent of the XE is made from lightweight aluminum, and the car utilises exotic double-wishbone front suspension taken directly from the F-Type sports car, while the rear suspension is an “integral link” setup (which Jaguar claims is more effective than a multi-link). 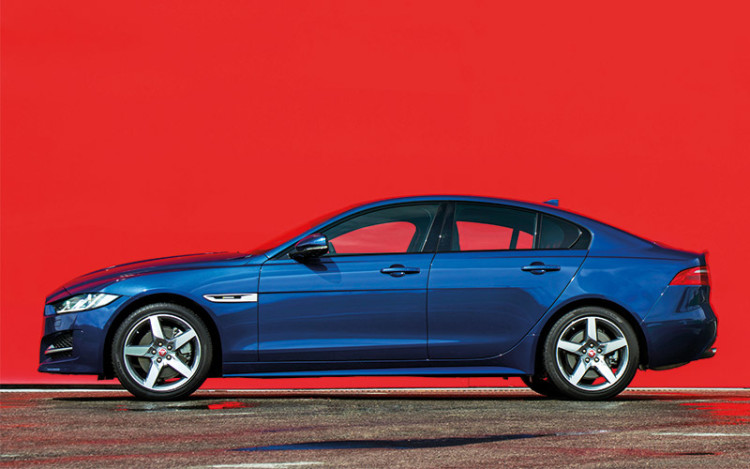 Even the 3 Series, considered to be the best-handling car in this class, comes with a more conventional MacPherson-strut front suspension and multi-link rear suspension.

Styling-wise, the XE is attractive enough, albeit erring on the safe side. It may resemble a sports saloon when viewed from the side, thanks to a stretched bonnet, a “pulled-back” cabin and a sloping roofline, but the non-descript rear lacks the intent and aggression of Jaguar’s current front end. Still, the XE’s sleek profile means this is the most aerodynamic Jaguar ever (with a drag coefficient of 0.26).

While its design doesn’t stand out, it just about holds its own aesthetically against its rivals.

The XE comes with a choice of five engines: two diesels and two petrols (all four are 2-litre 4-cylinder units), and the same 3-litre supercharged V6 found in the range-topping XE S and the entry-level F-Type.

While the initial set of petrol engines are from the XF and XJ, Jaguar’s Ingenium turbo-diesels are built in-house and completely new, with Ingenium petrol engines expected to join the XE range in the near future. Available at the launch are the more powerful versions of the 2-litre diesel and petrol motors, with 180bhp/430Nm and 240bhp/340Nm respectively, alongside the 3-litre V6.

Jaguar says it’s likely only one 2-litre petrol model and one 2-litre diesel version will land in Singapore, with the 3-litre XE S yet to be decided.

Making its debut is Jaguar’s All Surface Progress Control traction management system. In essence, the car can drive itself at up to speeds of 30km/h whenever low grip is detected, with the driver needing only to steer the vehicle. Meant more for countries with winter, it’s unlikely that local drivers will ever call upon this feature.

Whichever variant you choose, two things stand out: An excellent ride and equally excellent steering. Jaguar has gone to great lengths to find the perfect balance between precise handling and a plush ride, and it shows. The car is composed and fluid on the move, and reacts impeccably to steering inputs while being nearly as cosseting as a Mercedes C-Class.

Even in Dynamic mode (which firms up the steering and damping, and sharpens the throttle), the XE is never harsh, at least on flat-as-a-pancake Spanish roads. If you specify the adaptive dampers, the suspension only firms up when lateral movement is detected, so you get superb body control in the bends plus the same straight-line, bump-absorbing comfort as you would in Normal mode.

Jaguar’s first-ever electric power-assisted steering is another gem. The helm is beautifully weighted and offers vast amounts of consistency and precision, along with decent feel. Pair that with the wonderfully resolved chassis and you have a saloon that handles almost as well as the 328i. While not as sharp as the Bimmer, the XE’s abilities are more rounded and accessible. 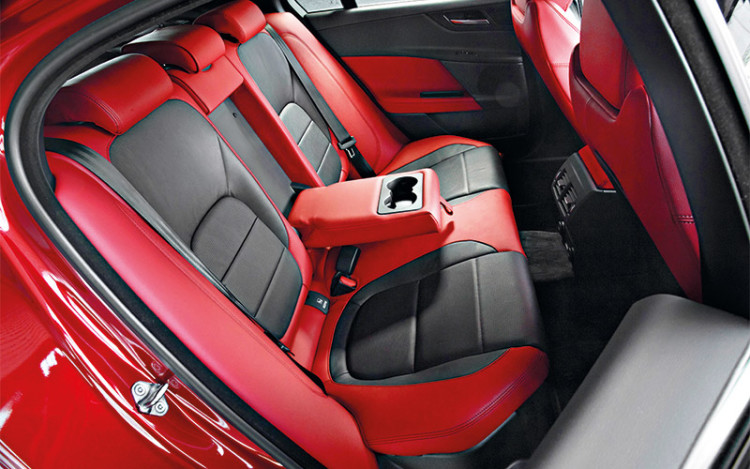 In terms of pace, the 2-litre diesel and petrol engines are more than adequate for the job. Their performance figures are respectable: zero to 100km/h takes 7.8 seconds in the diesel, and a second less in the petrol.

Even though the petrol engine lacks excitement, it’s smooth, linear and decent-sounding, without the trashy roar typical of 4-cylinder units when I floor the throttle pedal.

Even the Ingenium diesel engine impresses when hurried. It’s slightly flat below 2000rpm, but picks up strongly after that, with a lovely spread of torque all the way to its 4000rpm redline.

Diesel clatter is minimal, but the appeal of the engine, like all other turbo-diesels, is from its fuel economy and emission numbers (23.8km per litre and 109g of CO2 per kilometre).

All petrol XEs are mated to a slicker and much improved ZF 8-speed automatic gearbox, while the diesel versions can be hooked up with a 6-speed manual. The transmissions complement both engine types very well, but the manual seems to bring out the best in the diesel, despite said gearbox being a little notchy at times.

For drivers who want more oomph, the XE S is the one to drive. With 340bhp and a smattering of go-fast parts that include larger air scoops, bigger wheels and more powerful brakes, the range-topper is surprisingly entertaining around the Navarra racetrack in Spain, despite being a little too soft for track use.

It’s on the road where the XE S really shines, providing a level of engagement the 2-litre models lack. With all that extra power, the car comes alive, compelling the driver to fully exploit its capable chassis. You get a growly V6 up front for company, too, although the addictive exhaust note from the F-Type with the same powerplant is nowhere to be heard. 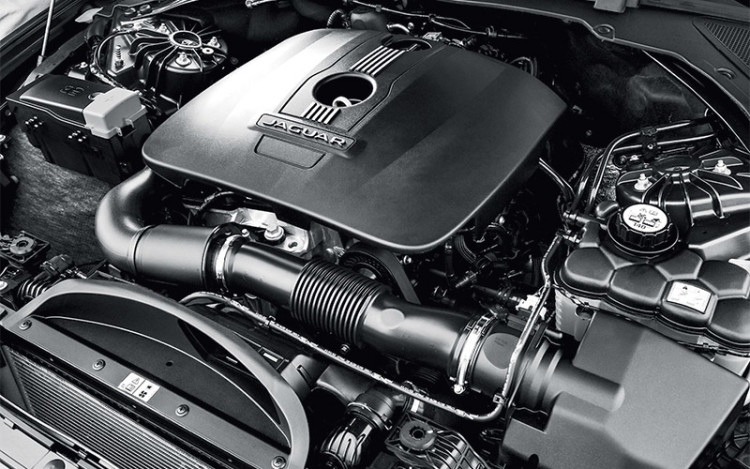 Inside, you get an interior that is more reminiscent of Jaguar’s flagship, the XJ, than the mid-range XF. There’s the XJ’s signature “Riva Hoop” cockpit design, where a ridge connects the dash to the doors, encircling the front occupants in luxury-boat style.

There’s generous application of premium stitched leather, pleasing wood veneers, an F-Type-derived steering wheel and dials, and a newly created centre console with Jaguar’s new InControl Touch infotainment. It’s light years ahead of the old infotainment system in terms of responsiveness and ease of use.

Better graphics aside, Jaguar’s proprietary InControl apps can be accessed through the 8-inch touchscreen. You can also connect to the car using your smartphone to check on things like fuel level, or lock/unlock the vehicle using Jaguar’s InControl Remote, in addition to the usual Bluetooth, navigation and voice-controlled capabilities.

Occupants in the XE get a hushed cabin devoid of excessive wind and road noise, thereby masking the perception of speed on the expressway. Interior build quality is not quite up to modern German standards (if I’m nitpicking), but the cabin still feels expensive enough to keep junior executives happy.

Rear legroom is similar to, if not slightly less than, that of the 3 Series. There’s ample headroom for six-footers thanks to two cutaways in the ceiling, but with the huge transmission tunnel and raised middle seat, it’s best to stick with two passengers in the rear for longer journeys. 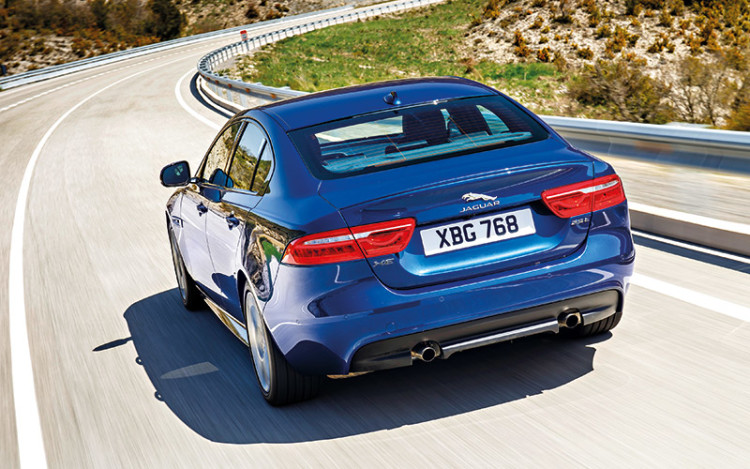 The backseats have versatile split-fold, but the rather narrow 450-litre boot is about 30 litres smaller than its German rivals’.

Those qualms aside, the XE has the equipment, refinement and performance to go head-to-head with BMW, Mercedes and Audi in this hotly contested segment. No longer playing second fiddle to the big three, it slots in nicely between the sporty 3 Series and the comfort-orientated C-Class.