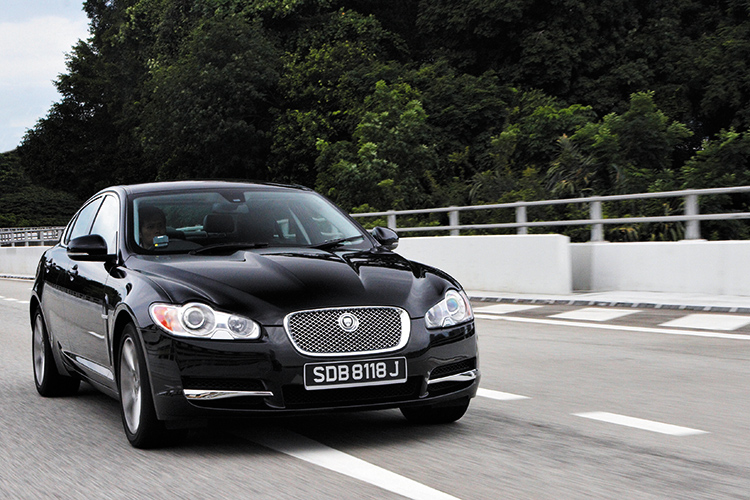 At first glance, the Jaguar XF Sport’s “XF Sport” label would seem like a misnomer for a diesel model.

Singaporeans brought up to believe that diesels are noisy, polluting and slow would hardly expect the name to be appropriate.

When the Jaguar XF Sport was driven to the main entrance of the showroom for my collection, no one would have known it had a diesel engine under the bonnet.

There was no clatter at low speed or idle and of course, no black smoke from the exhaust.

Yes, the diesel V6 in the Jaguar XF Sport is very quiet, with even less idling clatter than some German 4-cylinder petrol engines!

This level of refinement is the result of painstaking development and state-of-the-art technology. 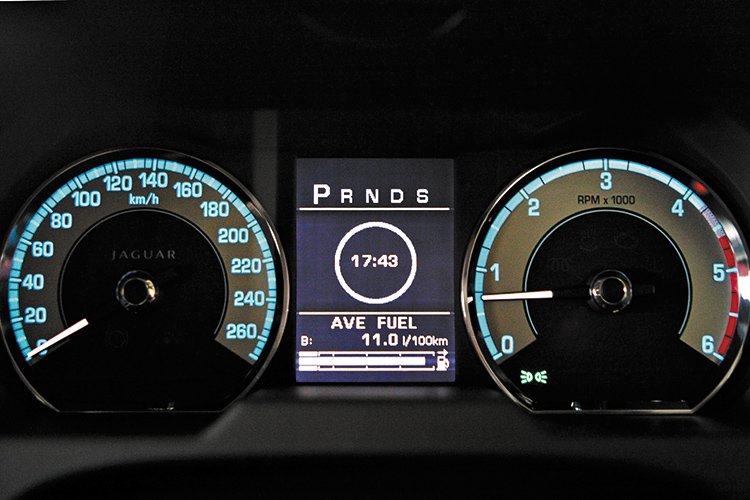 Multiple precise injections of fuel also have the same effect.

The engine cover has also been optimised for minimal radiated noise.

Unique to the AJ-V6D Gen III S engine is a parallel sequential turbocharger system, a world-first for a V-layout engine.

The larger variable-geometry turbine operates at lower engine speeds, when exhaust gas inputs are lower, to give muscular low-end response.

The result of this clever technology is imperceptible turbo lag, greater response at low speeds and maximum turbo boost on open roads.

Pick-up from rest to 100km/h takes a mere 6.4 seconds, but it feels even quicker than that, thanks to the tremendous 600Nm of torque available at just 2000rpm. 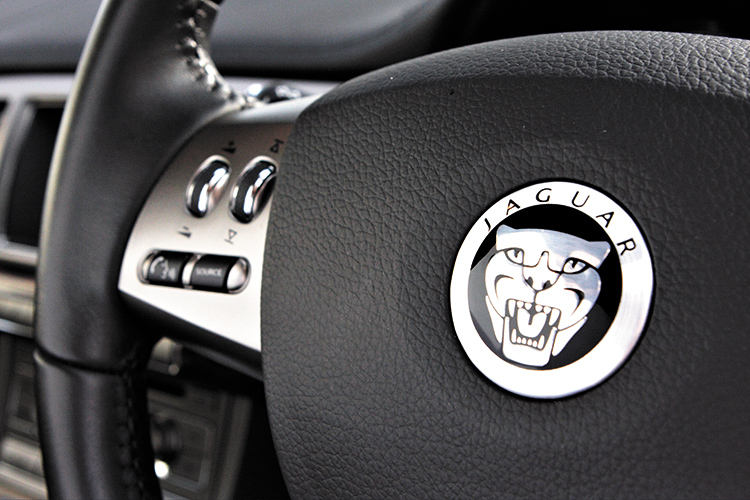 The Jaguar XF Sport has so much low- and mid-range twist that it can easily leave most sports cars behind.

While the performance is truly astounding, the true forte of the Jaguar XF Sport is its abstemious nature.

(In my opinion, urban readings are more representative of what drivers could possibly achieve in Singapore. I feel the authorities should mandate distributors to quote urban figures instead of the overly optimistic combined consumption numbers currently displayed on windscreen stickers in car showrooms. But I digress.)

This magnificent cat was burning just 9.3km/L during my hard-driving tenure with the car.

This is at least 30 percent better than what an average 3-litre petrol-engined saloon would achieve.

The comparison is all the more glaring when the Jaguar XF Sport delivers far superior usable  performance than most turbocharged petrol engines of identical capacity. Deployment of transmission selector is the most dramatic aspect of the cool cockpit.

In the real world, it is torque rather than horsepower that really matters.

And 600Nm of torque is very close to the 625Nm produced by the supercharged 5-litre V8 in the XFR!

If I sound like a diesel fan, you are absolutely right.

The Euro 5 compliant diesel of the XFS is far cleaner and less polluting than a petrol engine of similar size.

And a diesel engine burns one third less fuel per kilometre.

It is truly time for the authorities to drastically rethink the additional “special” tax levied on diesel engines which are compliant with either Euro 5 or 6 standards.

Anyway, back to the Jaguar XF Sport. 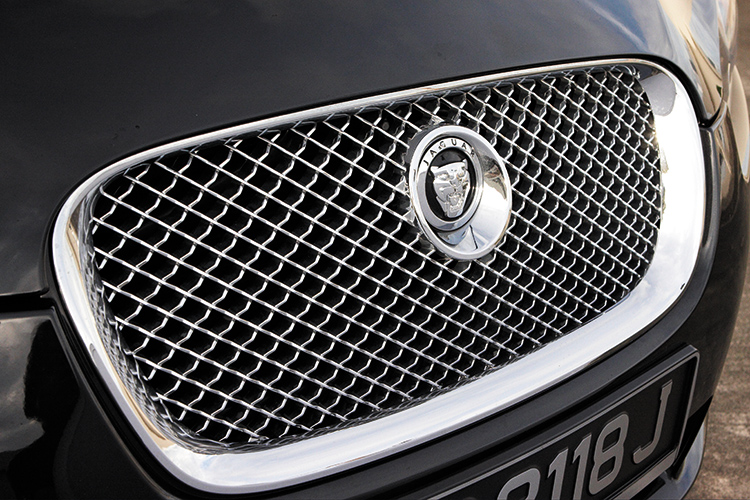 Mated to the V6 diesel is a sophisticated 6-speed autobox. Gearshifts are swift and barely perceptible.

All Jaguar XF Sport models sold in Singapore are fitted with the Adaptive Suspension.

In the default mode, the ride is very compliant over ridges and bumps, perhaps a little soft for those accustomed to firmish Teutonic ride quality.

Press the switch with a checkered flag symbol on the centre console and the suspension stiffens up a little, while the Dynamic Stability Control (DSC) allows more slip before taking over.

And if it is out-and-out track work you want to indulge in, press and bold the button for 10 seconds – suspension and DSC settings now allow truly exuberant driving, with minimum intrusion from the electronics.

In the Jaguar XF Sport, you always feel cocooned from the vagaries of road travel, even when the suspension is set to its sportiest mode. This level of comfort has not been at the expense of handling.

Over twisty bits and very quick corners, it is truly hard to fault the XFS’s overall handling and roadholding.

It goes where it is pointed, with poise and composure even when pushed to its limits.

And the nicely weighted steering leaves you in no doubt where the car is headed.

It is, above all, a modern Jaguar, a marque that conjures up images of class and craftsmanship.

A good example is the dramatic centre console. To give the top of the console the look of being fashioned from a single piece of wood, the doors of the two cupholders fit pinch-tight. Wake up the Jaguar XF Sport from a snooze cruise with this switch, which enlivens the suspension and DSC.

The wood trim has a razor-edge look with surgically precise, vertical cuts.

A cylindrical gear selector, which rises from the console when the engine is started, remains unique to Jaguar.

The same could be said of the air-conditioning vents, which rotate open when the engine is switched on.

The cabin and fittings of a Jag never fail to induce a feel-good sensation.

Seats are comfy and cushy, and the ambience is befitting that of a classy English country club. 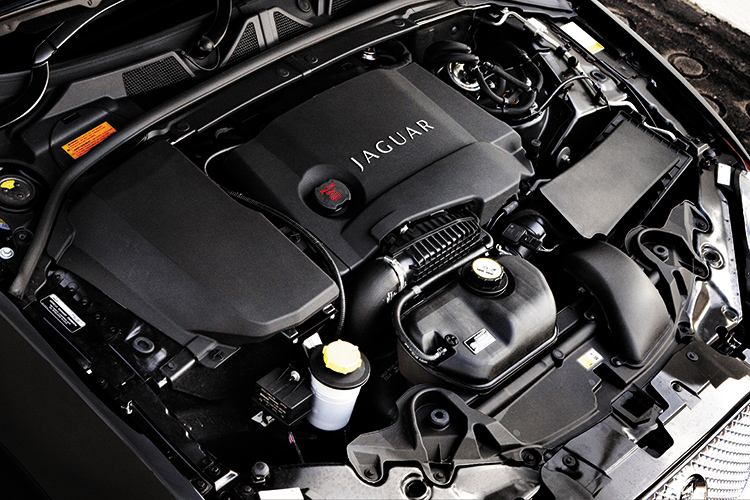 Head, leg and elbow room at the rear may not be as generous as that of a Mercedes E-Class or Audi A6, but it sure feels cosier and more luxurious.

In my mind, this diesel version is easily the best all-rounder in the XF range.

The petrol-engined 3.0 V6 is lacking in overall refinement and performance, while the 5-litre V8s are quick but thirsty.

And in the real world, the Jaguar XF Sport is virtually as quick as the V8 XFs.

The biggest bugbear is the car’s hefty road tax brought about by the punitive diesel levy. 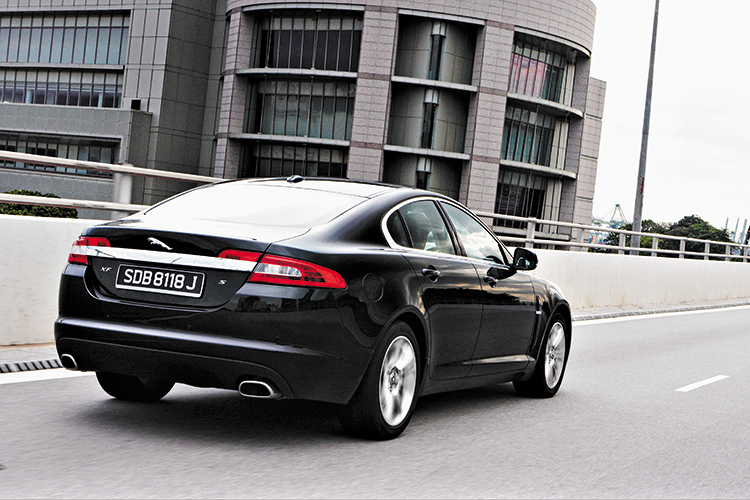 At $6089 per year, this amount is about $2993 higher then the tax payable for a petrol V6 of similar capacity.

The difference can be negated if one covers more than 30,000 kilometres a year, since the diesel is at least 30 percent more frugal than the petrol V6.

However, the performance advantage is so enormous that this seems a rather paltry sum, especially when the superior specification is also factored in.

Check out the latest XF