The Jaguar XJ and Audi A8 go head-to-head in this aluminium limo shootout
Loading posts...
0 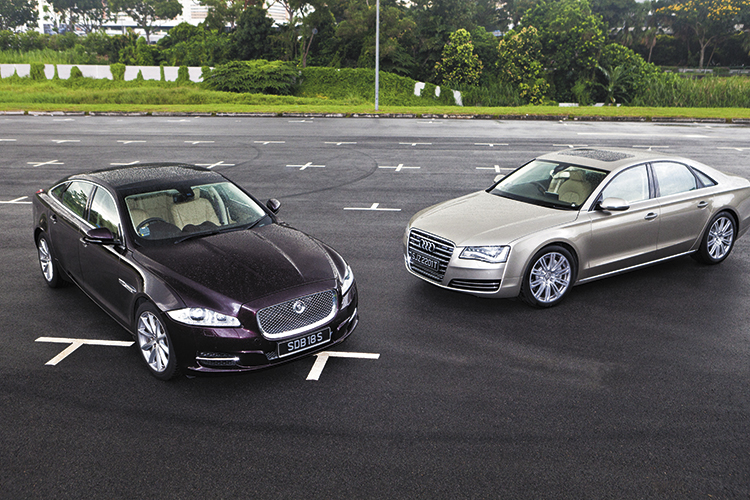 The Audi A8 and Jaguar XJ have something in common. Good though they both are, their predecessors never achieved the market penetration of rivals such as the Mercedes-Benz S-Class, BMW 7 Series and Lexus LS.

But the recent local launch of sparkling new big models from Audi and Jaguar seems to indicate that a shakeup in the luxury saloon segment may well be imminent. 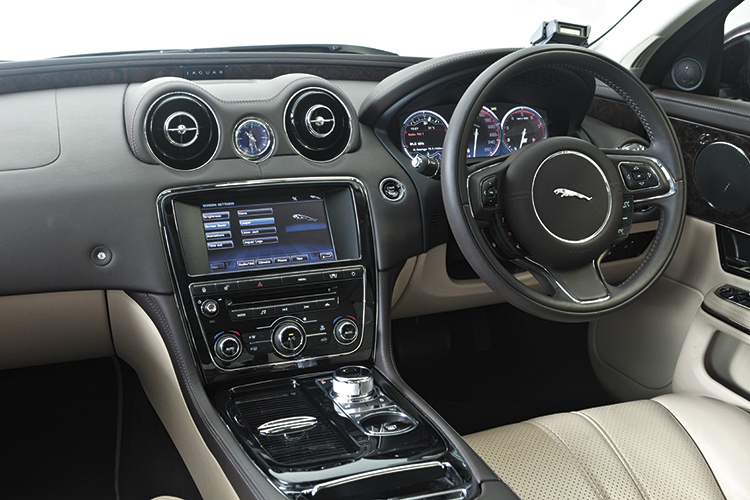 Handcrafted tradition and spacecraft technology come together beautifully in the Jaguar XJ, but it is less solidly built than the Audi A8.

Other models in the wholly long-wheelbase XJ range are supercharged 470bhp Portfolio and 510bhp Supersport models, and a 3-litre turbo-diesel V6. 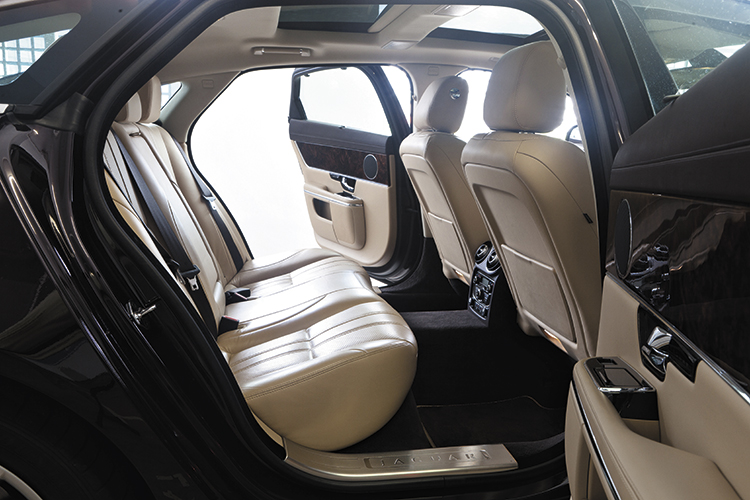 Though competing in the same towkay sector, the Audi A8 and Jaguar XJ could not be more different in their appearance. The A8’s exterior is evolutionary rather than revolutionary, with conservative styling that embodies Audi design DNA. It looks very much like an upsized A4.

Jaguar’s approach with the latest XJ is diametrically opposite. Its total break from the retro look of its forerunners may upset traditional Jag fans, but will surely help win new ones. It does not sport a Jaguar leaper on its bonnet (due to pedestrian safety regulations), but its overall stance is like a big cat about to pounce on its prey. 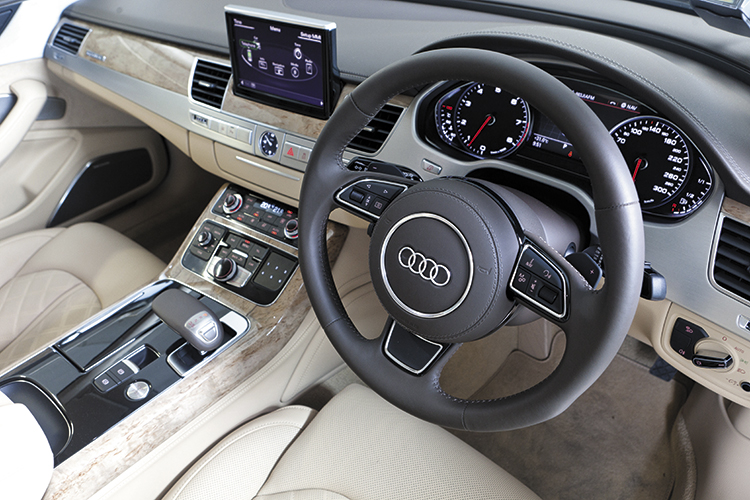 The two cabins are also very different. The German cabin impresses with its superb quality and sheer attention to detail. Fascia highlights are the two “deployment” tweeters on either end and the sizeable screen that rises out of the centre of the dash. These features may seem extrovert, but they are truly functional.

The monitor, for instance, gives clear images which can be linked to Google Earth for navigation, while the elevated tweeters help provide crystal-clear audio highs with excellent definition and dispersion. 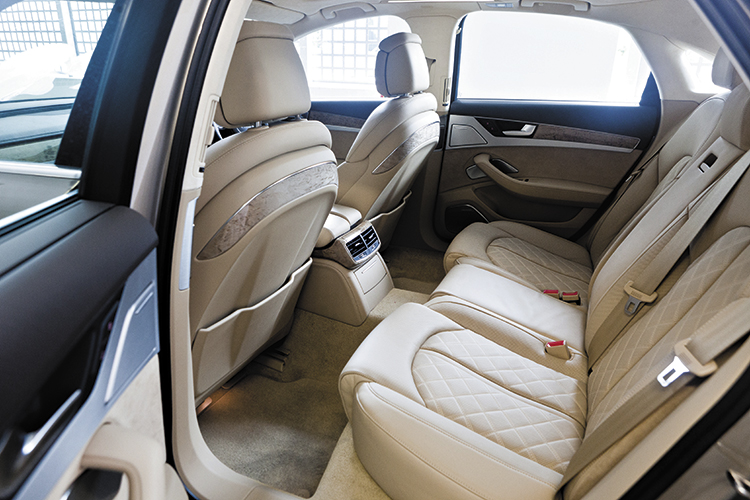 The XJ’s cockpit layout is more unique, with a big centre console dominated by the round gear knob, which rises when the engine is started. This somewhat gimmicky feature, with the Dynamic setting button placed nearby, is unique to Jaguar. An innovative virtual instrument display has replaced the conventional “physical” instruments.

These digital dials, rendered behind a non-reflective glass screen, appear “real” and solid. And they glow red when Dynamic is  selected – a very clever touch. It is the British interior that feels more special, with its sweeping instrument panel and architectural lines. The minimalistic design features four spherical air vents, with high-gloss piano black finish contrasted against chromed metal components. This stylish contrast is repeated on the centre console. With its warm and luxurious ambience, the cabin of the XJ is the nicer place to be in.

The A8 scores defensive points with the unbeatable quality of its cabin materials, coupled with faultless fit and finish. It also has a superior sound system. The seats of both cars offer fantastic support and comfort. 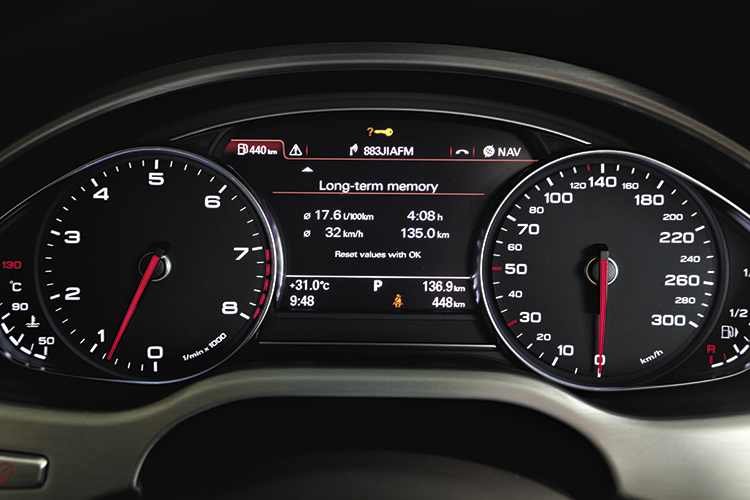 Audi drivers know these well, but the flagship has greater features and bigger numbers than usual.

With the standard wheelbase, the rear legroom of the A8 cannot be regarded as generous, so buyers would probably do well to pay $26,000 more for the stretched version, which remains well proportioned.

Though both contenders here are endowed with V8 engines, the end result is dramatically different. The 4.2-litre V8 of the A8 is quieter and sweeter across the whole rev range. This feeling of refinement is enhanced by the tighter body feel of the German car. With 372bhp and 445Nm torque, the A8 is also no sluggard. 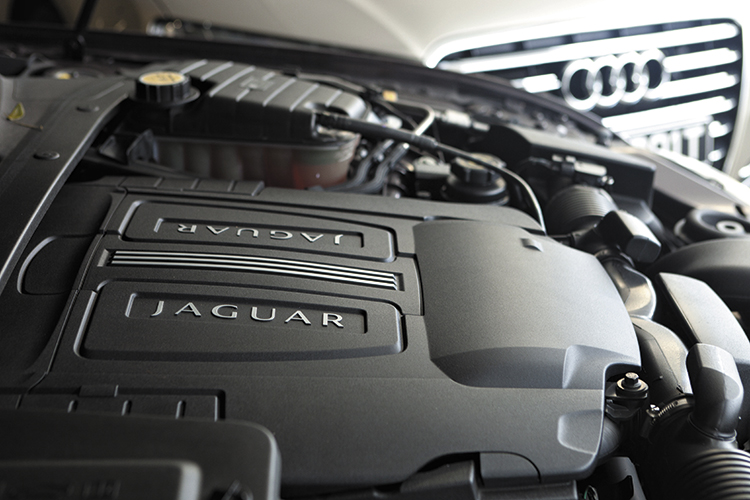 The Jaguar XJ’s V8 is a Spitfire of an engine, with a ton of torque and loads of aural character, but it lacks the mechanical polish of the German powerplant.

Compared with the Audi, the Jag has a far sportier countenance. Its 5- litre V8 may not feel quite as smooth, but makes up with noticeably stronger performance, an impression further enhanced by the sportier engine and exhaust note. While its power rated at 385bhp is just 13bhp higher than the Audi, the Jag’s maximum torque of 515Nm is significantly more (by 70Nm).

On the road, the difference in torque is telling. Thanks also to its 62kg lower kerb weight, the XJ accelerates with greater verve and vitality than the A8. Even though both manufacturers claim identical 0-100km/h timings of 5.7 seconds, there is little doubt that the Brit feels far livelier and more responsive on the go. 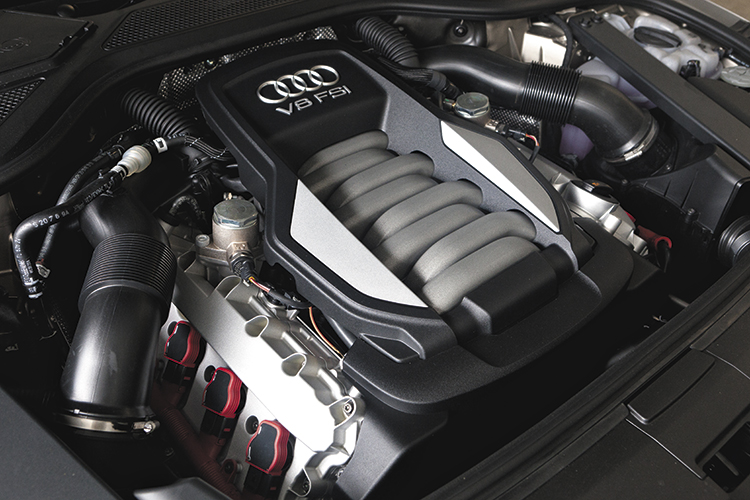 Audi A8’s V8 has the top-notch Teutonic engineering that executives expect, but its power of acceleration could be a little more convincing.

The Jag is also more agile over twisty roads. Its steering is light but direct, with superb feel and feedback. Though huge, the XJ has an entertaining, fun-loving nature, like a big cat at play.

The A8 feels altogether more mature as a luxury car. Its low-speed ride is more composed, with fewer rumbles transmitted to the occupants. More hushed and more refined, it is even more of a limousine than the Jag. When driving the German car, one feels more inclined to cruise around than to drive it hard or fast. 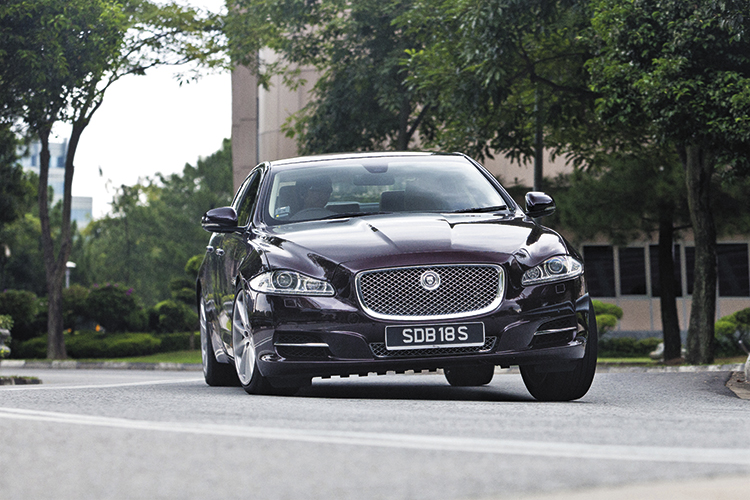 Jaguar XJ’s handling is sharper and more enjoyable than the Audi A8’s, but the payoff is a generally less comfortable ride.

With quattro all-wheel drive, it does offer greater grip than the rear-drive XJ on very slippery surfaces, but the A8’s outright handling is neither as entertaining nor as enriching.

Luggage capacity of both cars is almost identical, with the Jag offering 520 litres – 10 litres more than the Audi. Golf bags can be ferried longitudinally in either vehicle – an important consideration in this class of transport. 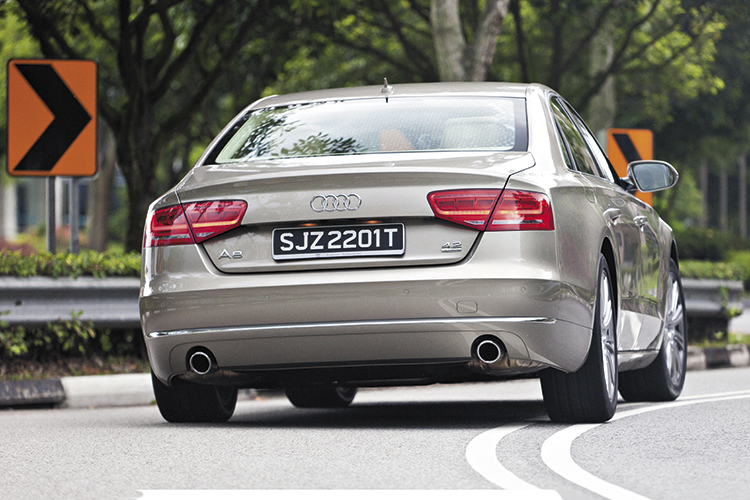 The Audi A8 is not as sporty as the Jaguar XJ in corners, but it is a superior cruiser with outstanding comfort in all conditions.

So, which of the two luxury cars is better? The keen driver would, without a doubt, pick the Jaguar XJ. The large cat gives the enthusiast a truly involving drive with its agility, poise and explosive acceleration.

But for the average driver unable to fathom or access the niceties of handling, the Audi A8 might well be the better choice. It has a slight edge in build quality and urban ride comfort, plus a more impressive infotainment package. 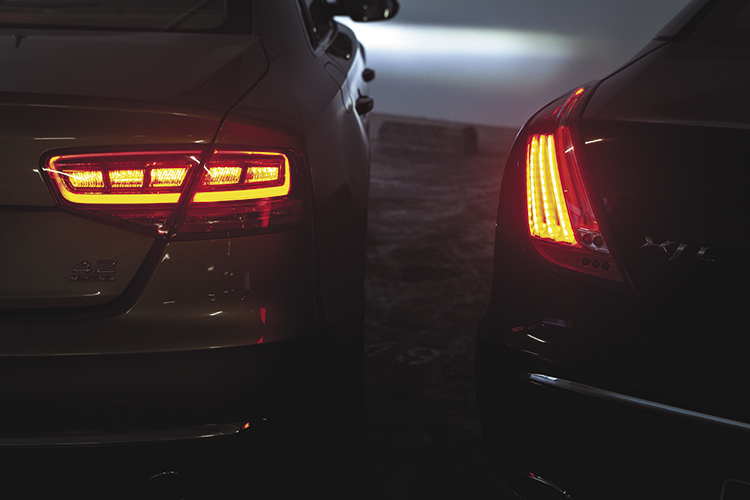 The latest light-emitting diode designs adorn the Audi A8 and Jaguar XJ, but the “cat’s claw marks” of the Jaguar XJ are cooler.