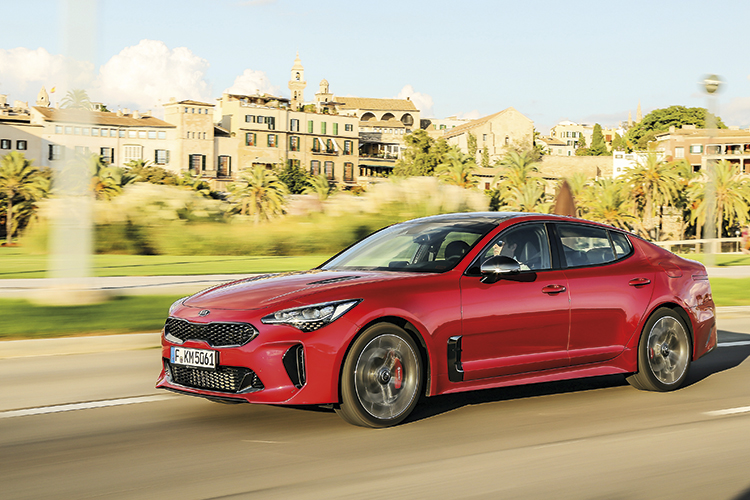 The Stinger is agile when driven hard and flows down the road with a lovely fluidity.

The Koreans are attacking. No, I’m not talking about warheads being randomly fired into the Pacific by a dictator with a bowl haircut. Rather, this threat is from South Korea, and while the weapon of choice, the Stinger, is named after a missile, its target is German, not American.

More specifically, Korean car company Kia is on the offensive, and it has BMW in its sights. Because a front-engined, rear-driven sports saloon is clear BMW territory, and it is this very formula that Kia has chosen for its new contender.

The Stinger isn’t Kia’s first rear-drive saloon. The big K9 luxury car (not sold in Singapore) has been there, done that, but the Stinger is certainly the Korean marque’s sportiest offering to date, in terms of both looks and dynamics.

The Stinger’s slinky, dramatic shape is directly traceable to the Kia GT Concept from the 2011 Frankfurt Motor Show. That wide, low fastback was so avidly received that Kia resolved to put it into production, and effectively spent the next five-plus years creating something worthy to be clothed in the GT Concept’s stunning body.

Kia’s own press materials admit that BMW’s 4 Series was the benchmark during the Stinger’s development (presumably because the Gran Coupe variant of that car is a mid-size liftback like the Stinger), but thankfully, the Stinger is very much its own car and not a BMW clone.

Sitting low, wide and purposeful on 19-inch rims, it is 19cm longer than the Bavarian at 4.83 metres and looks far sleeker as a result. 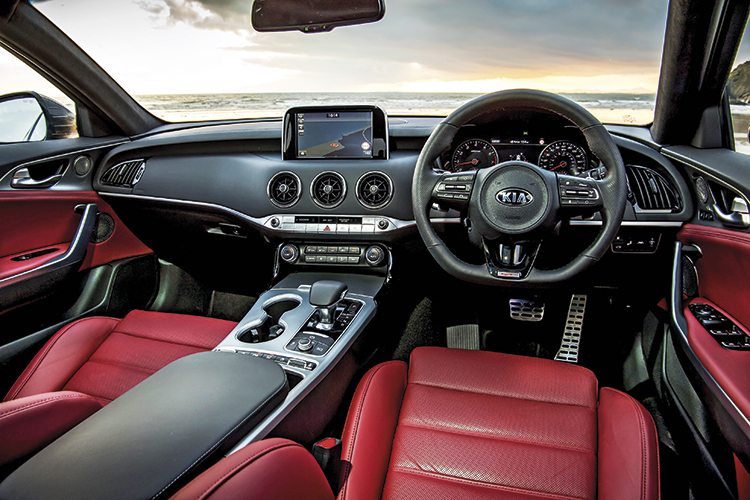 Stinger’s four-door fastback cabin is a cut above other Kias in style, finish and quality, and also surprisingly spacious.

Its face sports Kia’s distinctive “tiger-nose” grille, but supplements that with feral-looking headlamps and a prominent bumper bookended by vertical “air-curtain” intakes at its extremities.

Wisely, Kia has avoided overselling the Stinger’s credentials by describing it as a hardcore performance saloon, as that would have pitched it into direct comparison with established (and vastly more expensive) mid-size super-saloons such as the BMW M3 and Mercedes-AMG C63, a battleground in which it would not have stood a chance.

Rather, Kia describes the Stinger as a gran turismo – a car for a swift, comfortable cross-country journey instead of a track day.

That said, Kia’s engineers did pound endlessly around the Nurburgring developing the Stinger’s chassis – to good effect, as will be explained further below.

Two engine variants will be sold in Singapore, both turbocharged – a 2-litre petrol 4-pot with 255hp and the range-topping 3.3-litre petrol V6 with 370hp. 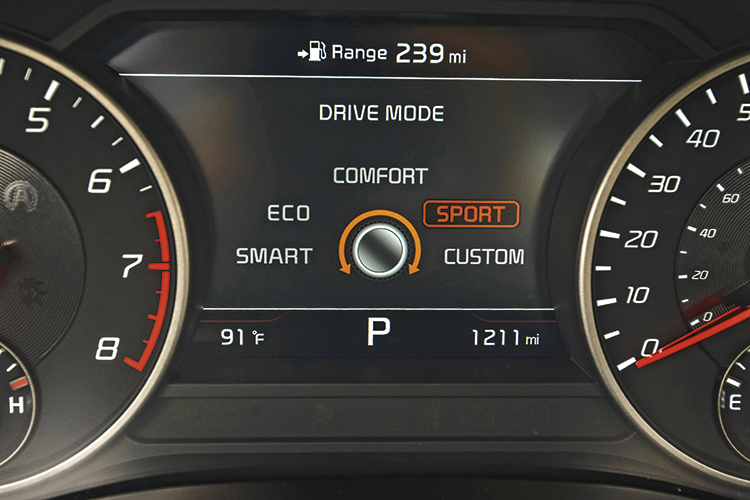 Both variants are served by an 8-speed ZF-built automatic gearbox with paddle shifters, and while all-wheel-drive is an option in some other markets, the Stingers coming to Singapore will be exclusively rear-wheel-drive.

Despite the Stinger not being touted as an outright performance car, straight-line pace on either of the two Singapore-bound variants is very strong.

Inside, the low-slung car is surprisingly roomy, with ample space all round.

The Kia’s interior space trumps the benchmark 4 Series Gran Coupe, particularly in rear legroom where it holds an almost 7cm advantage thanks to its extra body length. Boot space is up on the German’s as well. 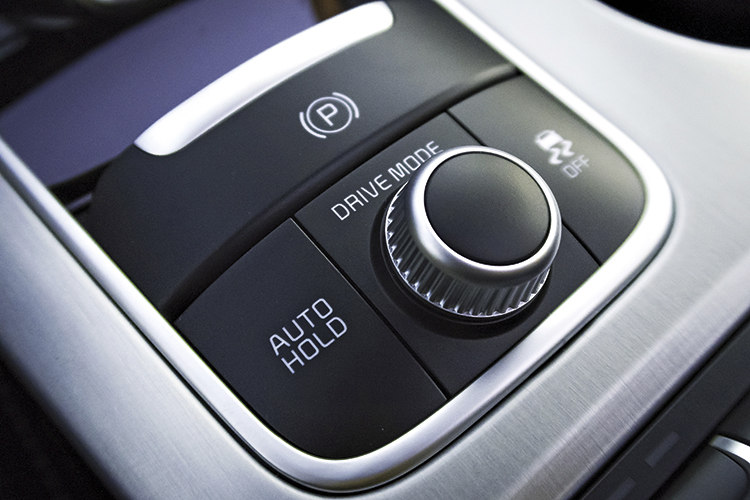 Reviewer’s preferred drive mode in the Stinger was Sport, which suited all occasions.

The stylish cabin is a cut above the rest of the Kia range in finish and build quality.

The low-line dash-top is trimmed in leather-like material, the brushed-metal finish on the centre console and fascia is classy, and the trio of chrome-ringed eyeball vents on the dash look very Mercedes-like, as do the perforated metal tweeter grilles on the front edge of the door panels. Much of the minor switchgear has a pseudo-metal finish, and has a subtlety of action which speaks of quality.

Standard equipment is very generous. Even the base 2-litre Stinger comes with adaptive damping, full LED headlamps, a head-up display, wireless smartphone charging, a powered tailgate and a full suite of electronic driving and safety aids.

Five modes are on offer – Eco, Comfort, Sport, Sport+ and Smart (where the car selects what it thinks are the best settings based on your driving style). 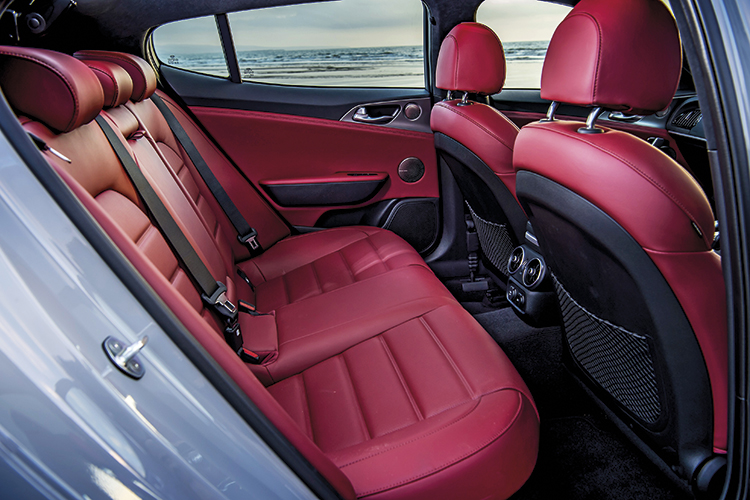 It’s all put to good effect, because driven hard, the Stinger is agile and playful.

On the twisty Mallorca Circuit where I was given a few laps in the 3.3-litre V6 version, the car felt planted and stable, and out of tighter corners the tail was happy to edge out under power for a bit of smoky drifting, without once feeling hairy or snappy.

The quick-geared steering was slightly lacking in feel, but linear in its responses and very well-weighted. The ghost of oddly weighted, inconsistent steering, which haunted Kias of old, has been banished for good.

True to Kia’s word, the Stinger is not an extreme track weapon. Its reactions and responses were keen rather than razor-sharp, and on track it felt most at home being driven at about eight-tenths instead of flat-out.

The Stinger proved equally adept at tackling Mallorca’s hilly country roads, which I explored after leaving the circuit.

The 3.3-litre V6 all-wheel-drive Stinger which I tried first rode beautifully, soaking up the occasional ruts and potholes on the hill roads without losing composure, even with the drive mode selector in Sport+. 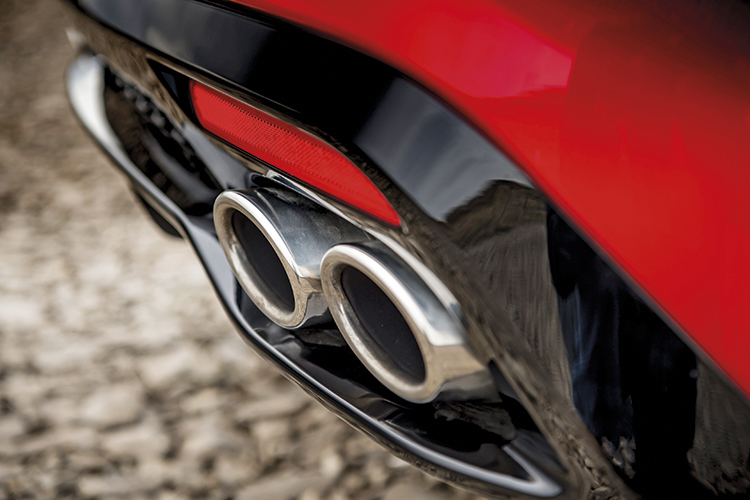 In fact, Sport/Sport+ were my preferred modes for all occasions. In Comfort there was the slightest bit of float over fast undulations, and Sport/Sport+ reined this in, while still retaining a very compliant ride. In this setting, the car was pliant over every type of surface and flowed down the road with a lovely, loose-limbed fluidity.

The V6 engine was lusty, with solid low- and mid-range punch giving lazy-giant urge at all speeds, accompanied by a nice purr from the exhaust.

Less compelling was the 8-speed autobox. Its upshifts were smooth, well-judged and nicely slurred, but downshift requests from the paddle shifters could take a second or two to register, and when really pushed hard, the shifts (up and down) lacked the immediacy of a dual-clutch transmission or even some of the better torque-converter automatics.

The 2-litre that I tried next had rear-wheel-drive, and as a consequence weighed 200kg less than the all-wheel-drive 3.3 I had just stepped out of.

The weight difference was immediately apparent in the car’s keener turn-in, and initially the 2.0 felt more agile and lithe. But oddly, its ride was less composed, the car floating and bobbing over undulations and generally feeling less planted through bends. 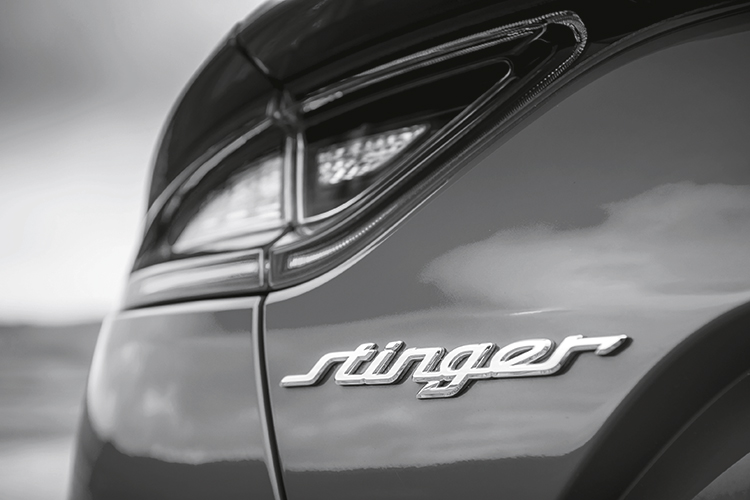 This was strange, because its weight advantage over the 3.3 should have given the suspension an easier time, with the car’s mass more readily reined in. Still, my time in the 3.3 has shown that the Stinger’s chassis has quality in depth, so further development of the 2.0’s damping should fix the issue.

When it arrives here in early- 2018, the Stinger will massively undercut the BMW 4 Series Gran Coupe (430i, 440i) and other comparable contenders such as the Audi A5 Sportback and Jaguar XE.

But even ignoring the Kia’s unique value proposition, it is an impressively accomplished sports saloon in its own right – stylish, well equipped, fast and comfortable (2-litre model’s damping notwithstanding).

It deserves to succeed. This Stinger missile is headed for a bulls-eye. 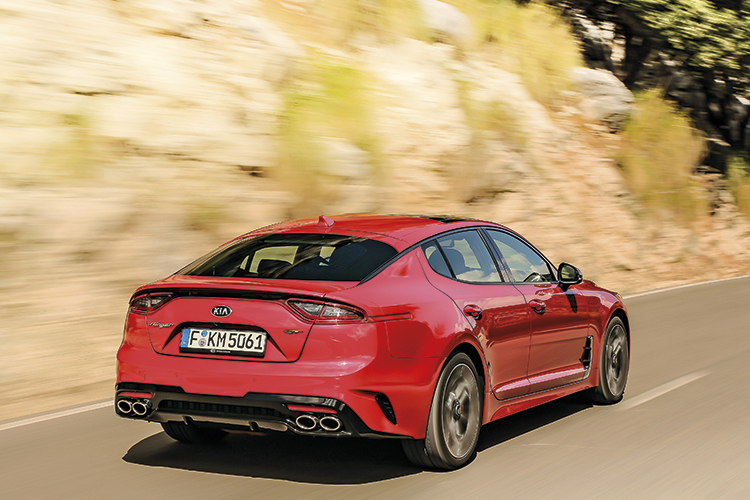 Kia has avoided overselling the Stinger’s credentials by describing it as a hardcore performance saloon.

Check out the Kia Stinger

Kia Stinger is a breakthrough sports saloon for the Korean automaker