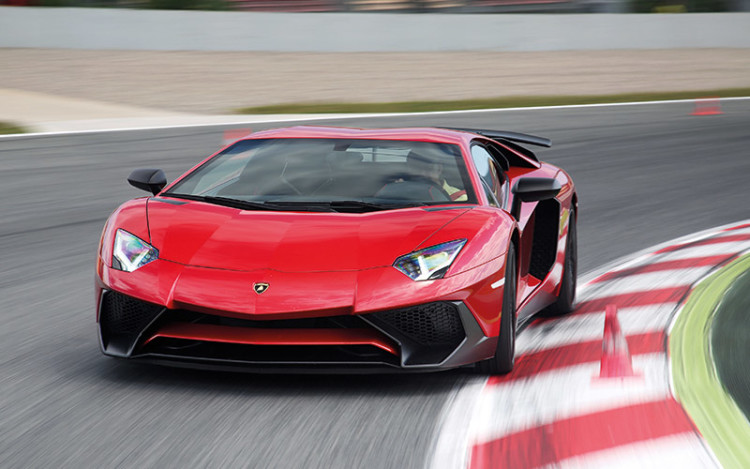 Lamborghini first used the term for its 1971 Miura, skipped it for the Countach, and used it again in 1995 for the Diablo. The Murcielago also featured an SV in 2009 as the run-out model.

Superveloce is Lamborghini’s time-tested formula that comprises body lightening, chassis/suspension uprating and engine tuning. The price, too, is “tuned” upwards.

If you think the regular Aventador already looks hot, then the SV variant will sear your retinas from a hundred paces. The huge rear wing, redesigned front nose, plus longer and deeper spoilers and splitters are guaranteed to rock your world.

That rear wing can be manually adjusted to one of three different positions to suit a driving style or particular circuit, trading downforce for reduced drag or vice versa.

Downforce is not all due to the rear wing, though, as the large rear diffuser on the underside replete with vertical fins uses the exiting air from the flat underbody to generate additional downforce.

The new aerodynamic package increases the overall downforce to between 182kg and 218kg, compared to the standard Aventador’s 74kg, but it is the front that has received the most attention because it is key to the vehicle’s aerodynamic balance. 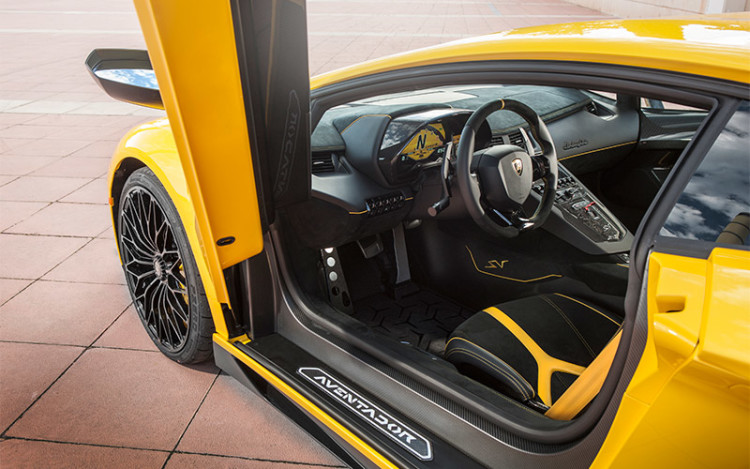 Getting huge amounts of rear downforce is a no-brainer, but achieving a front-rear balance at the same time is difficult without a similar spoiler over the front bonnet. Increased front downforce improves steering stability and turn-in behaviour.

By choosing one of the three rear wing angles, for instance, one can tune the SV’s handling for a neutral stance in high-speed corners.

The devil’s office is all decked out in black upholstery and flame-red accents (or another matching colour of the buyer’s choice) to complement the exterior finish.

It is also the first cabin to receive a new upholstery dubbed Carbon Skin, which is a composite of woven carbon fibre and a special resin that’s tough yet soft to the touch. It clads certain areas of the cockpit, such as the headlining.

Much of the Superveloce’s interior architecture is straight from the Aventador, but the carbon fibre sports bucket seats are new. They also save weight, as does the deliberate removal of sound insulation, which has made the carbon fibre chassis visible. Lamborghini even deleted the entire infotainment system to save weight, but it can be “put back” as a no-cost factory option.

If the whole cabin comes across as spartan and nearly severe, it was all done for the sake of saving weight.

Lamborghini thought long and hard about giving the instrument panel LCD a few user-selectable graphics, but decided that it needs to be just that one showing the engine revs and gear number in the boldest possible manner, with the car’s speed relegated to a small speck at the lower corner of the screen.

Is it effective? Perhaps, but anyway I was too focused on keeping the Aventador SV on the racing line to notice how fast I was going.

Did Lamborghini engineers really lighten what is already the most advanced carbon fibre monocoque body in the automotive kingdom? Yes, they did. Remarkably, they managed to lower the kerb weight by 50kg through an exhaustive process of careful material substitution and feature deletion.

They even cut some weight from the rear fenders and rocker panels by using what Lamborghini calls SMC Superlight. Also, by replacing the active rear spoiler and its mechanism with a fixed carbon fibre wing, they realised further significant weight savings.

There’s also a lightweight exhaust system – which must be so light because it probably has no innards at all – accounting for the wicked exhaust note that sounds more like a straight-through pipe.

But it can still slip past strict EU noise regulations, thanks to the bypass valve that keeps a lid on things until you hit Sport or Corsa mode. 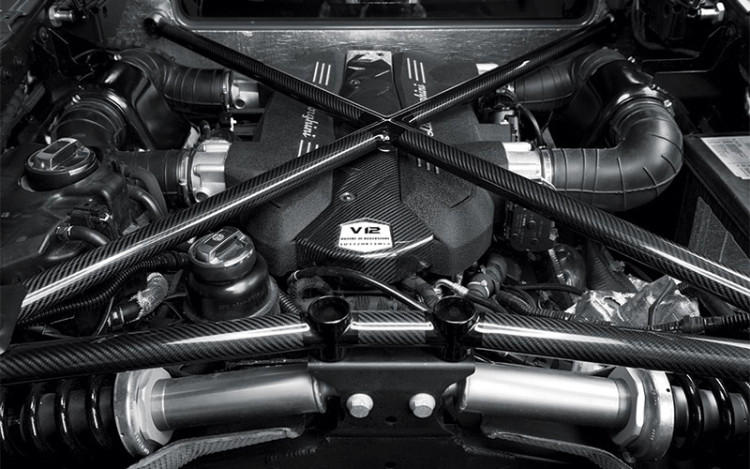 The V12 has been remapped to take advantage of the lower exhaust backpressure, thereby allowing the peak engine speed to increase to 8500rpm and the peak power of 750bhp to be liberated at 8400rpm instead of the Aventador’s 700bhp at 8250rpm. I really appreciate the naturally linear power delivery of a naturally aspirated 12-cylinder.

At full chat, it wails like a naturally aspirated Formula One racecar. It does not just make my hairs stand on end – it singes them off. What it sounds like is a rock concert with million-watt loudspeakers. Blowing my mind has never been so literal or loud.

The Aventador was designed for in-board suspension with a fixed damper rate, albeit a well-chosen one. For the SV, they have switched to a Magneto Rheological Suspension (MRS) system to get a wider damping range that would suit serious track work, yet be acceptable on the road.

As this test-drive is restricted to the Catalunya circuit, I can only ascertain that the damping is perfect for track days. As for comfort on normal public tarmac, I can only speculate, as even the service roads to the pit lane are too perfect to induce any harshness.

The SV is equipped with Lamborghini Dynamic Steering (LDS), a variable-ratio electro-mechanical system that has been carefully reprogrammed to suit high-performance driving. 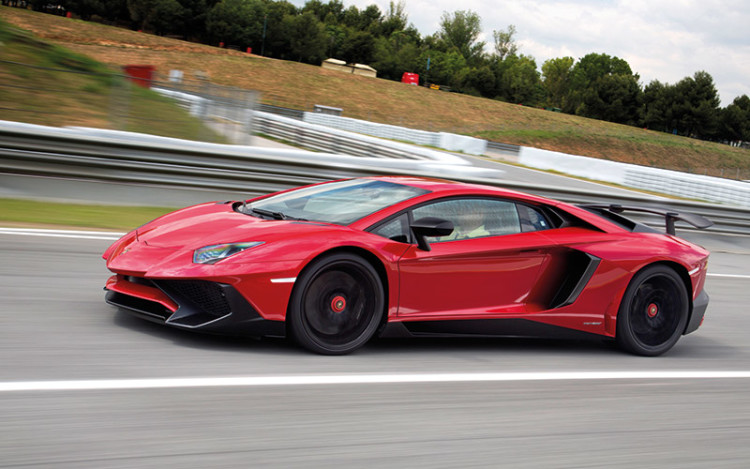 Depending on the car’s velocity, it varies the assistance and steering ratio to make it easy to pilot through city streets and carparks, without being nervous on open roads and speed-unlimited highways.

The big surprise is the new Lambo SV has actually taken on Germany’s Green Hell and lapped it in under 7 minutes. This will certainly cause unease not just at Ferrari but Porsche as well.

Its shift time has been whittled down to just 50 milliseconds, which actually makes the gearshifts less violent than in the standard Aventador. However, you’ll only get the quickest shifts in Corsa or Sport mode. The ISR might not be smooth as a dual-clutch, but its “slamming” gearchanges are perfectly in sync with the nature of this beast.

In Sport mode, you can use either auto or manual shifting, but Corsa only allows manual shifting. Sport-Auto is interesting because it’ll perform automatic shifts all around the track, downshifting perfectly to keep the engine close to full power at any time.

The resulting acceleration is mind-boggling, jumping to speeds of well over 200km/h in a flash. Good thing the carbon-ceramic disc brakes are up to the task of wiping off the speed – repeatedly and consistently. 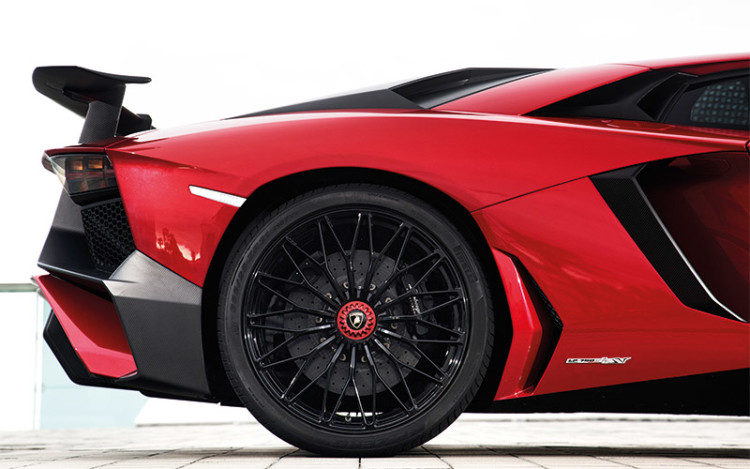 If all the shifting is taken care of by the car’s computer, I can fully concentrate on getting familiarised with the racetrack, as all I need to do is brake and steer.

Switching over to Corsa mode is more challenging, as I need to get all the shifts right. But when I do, it’s far more satisfying than in Sport-Auto.

Strada mode is really for the “transport stage” – to get to and from the track or your favourite stretch of road, as the ESP is too intrusive, cutting in way too early for any fun. However, it tries to deliver the smoothest shifts the ISR transmission is capable of, which means better than a three-pedal car but worse than a dual-clutch DSG. Strada also puts the MagnaRide suspension in its softest setting to get a better ride.

Sport or Corsa mode attenuates the electronic guardians so much that the handling gets substantially more playful, letting the tail step readily into oversteer to the point that it needs steering correction to recover.

As the chassis is so readable and predictable, I soon learn to exploit the limits and play with this 750bhp monster. It’s no teddy bear, though, as it will bite back if mishandled. But treated with skill and respect, it is a blast.

The SV is equipped with the Haldex Generation IV electronically controlled all-wheel-drive system, which distributes torque between front and rear in an active manner.

Up to 60 percent can be sent to the front or 90 percent to the rear, depending on the situation, in just milliseconds. There is a self-locking differential in the rear axle and an electronic differential in front. These are controlled by the ESP, which changes the characteristics according to the settings for Strada, Sport or Corsa. 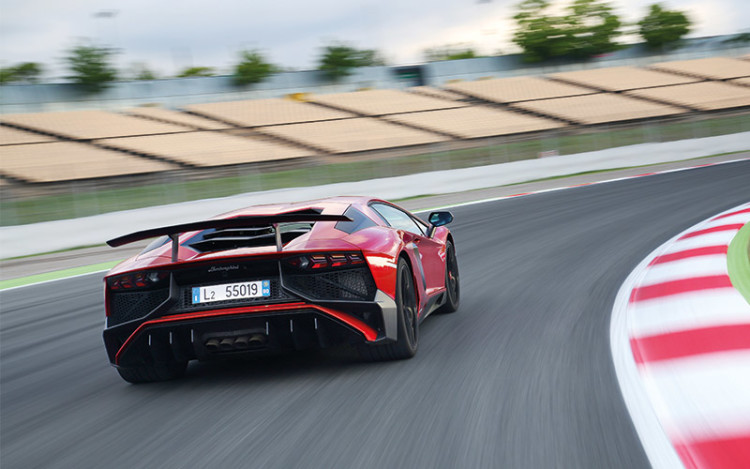 Amazingly, the SV feels like a well-sorted analogue machine on the track, without that artificial turn-in sensation that an active rear differential provides.

Corrections by the computer are so subtle that they seem to be entirely the driver’s effort. The chassis tuning is simply brilliant, giving advanced drivers like myself almost complete access to the tremendous handling capabilities of the supercar.

I think my adrenals have been drained flat for the next few months and the devil now owns my soul. The Aventador Superveloce is in your face, provocatively sexy and mind-bendingly fast. At this point, Lamborghini has sold 500 of the 600 units to be built.