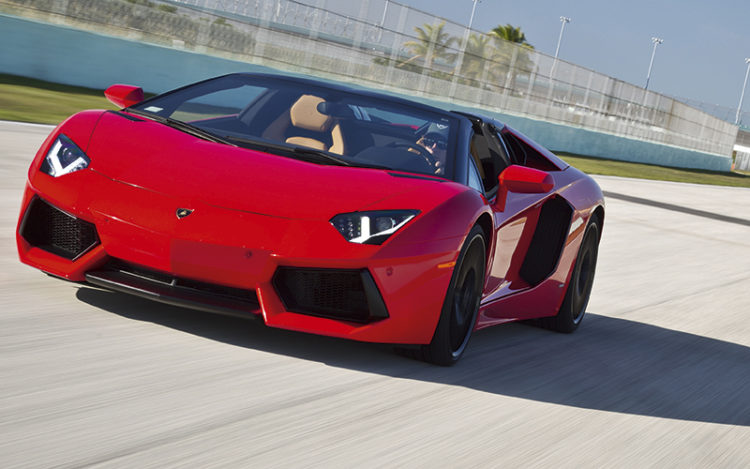 The convertible version of the Murcielago (the Aventador’s predecessor) was released at the tail-end of the model’s life cycle in 2007. It looks mad and all, but ultimately it’s a flawed diamond.

With this latest attempt at a topless V12 supercar, however, Lamborghini is keen not to repeat the same mistakes. Firstly, the marque wants its incredible new Roadster to have a longer lifespan, so it was introduced just two years after the Aventador LP700-4 coupe. Secondly, it’s been given a proper roof this time, superior to the Murcielago’s canvas afterthought, which is so fiddly that taking it off or putting it back on requires at least 20 minutes (plus there’s a silly 200km/h speed restriction in case the hood gets ripped off).

The Aventador Roadster’s two-piece carbon fibre top takes about a minute to remove or re-attach (if you’re familiar with the technique), and it’s been engineered to stay secure at the car’s scorching top speed of 350km/h. Not only does the manual hard-top preserve the perfectly sculptured shape of the Aventador, it also improves the structural stiffness of the Roadster when latched into place. 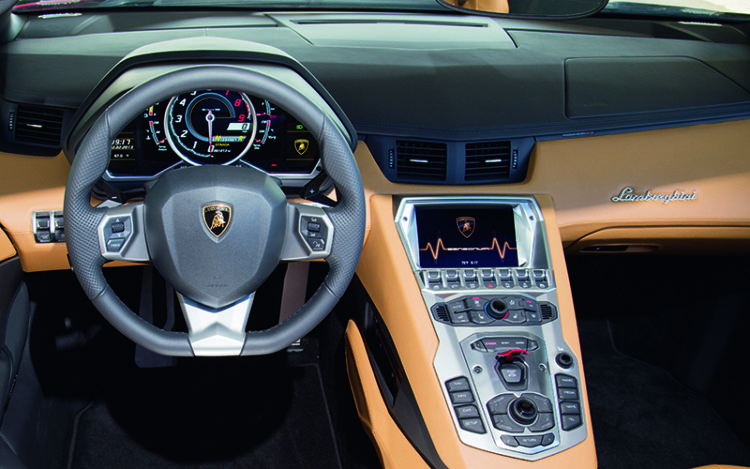 It looks suspiciously like some wild supercar cockpit, but it’s actually a super hairdryer.

Even though it seems as though chief designer Filippo Perini merely took a sharp “knife” and sliced the roof off the Aventador to create this roadster, it’s far more complicated than that. Because the Lambo uses a carbon fibre monocoque, the reinforcing of the lower structure once the roof has been “sliced off” would be a necessity.

Despite the extra reinforcement, the Roadster weighs just 50kg more than the coupe thanks to the generous use of carbon. Unsurprisingly, that two-panel top is made of carbon fibre, but its construction is unique. In order to get their weight down to just 12kg between them, each of the dual panels has three integral layers of carbon fibre – the outer “skin” is a tough RTM (resin transfer moulded) carbon, while the inner “skeleton” is a so-called forged carbon composite that is bonded to the thin inside layer. 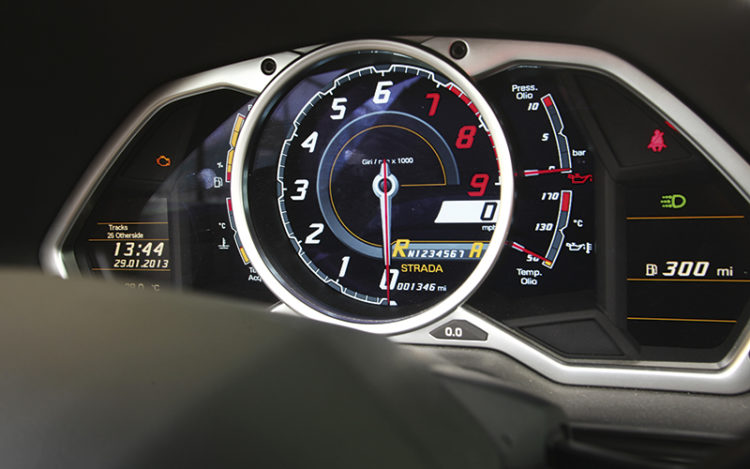 We’ve heard of RTM carbon fibre, but forged carbon composites are new to us. Lamborghini’s engineers refuse to elaborate, only saying that the chassis of the Sesto Elemento prototype is made of the stuff. What we do know is that forging takes heat and immense pressure, so it’s a mystery how the carbon fibre fabric can be aligned so neatly – the mysterious material has found its way into the roof and door sills of the Roadster. The Italian marque is possibly the automotive world’s most competent user of carbon fibre. All its carbon components are manufactured in-house, just like its virile V12 engine.

Naturally aspirated power is part of the company’s DNA, so the 6.5-litre V12 has stayed “natural”. But even Lamborghini isn’t immune to the global green movement, so it has voluntarily developed strategies to lower the average consumption and CO2 emission figures of its model range by 25 percent.

Flick up the cover, thumb the starter, and stand by to blow-dry your hair.

For the Aventador’s 12-pot powertrain, this means cylinder deactivation and stop-start. Cylinders are deactivated seamlessly, and so smoothly that it’s difficult to detect the deactivation. The stop-start system is the world’s quickest for a V12, with a super-capacitor that increases cranking power to allow the epic engine to restart in just 180 milliseconds instead of the usual 250-400 milliseconds in other V12 cars with a stop-start function. The 2013 Aventador coupe received these “economy” features, too.

Of course, saving the planet is of secondary importance in a supercar with a whopping 700bhp at its disposal, delivered to all four wheels via a 7-speed robotised gearbox (supplied by Italian firm Graziano). Called ISR (short for Independent Shifting Rods), it’s smaller, lighter and speedier than Audi’s dual-clutch S tronic system. 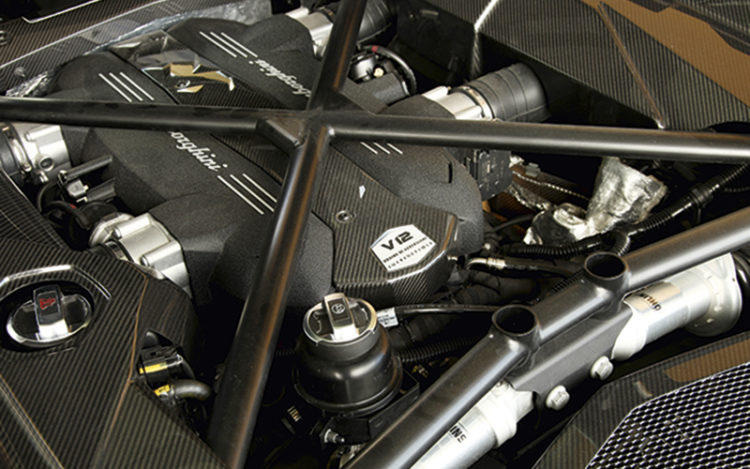 The violent horsepower produced by this monumental 12-cylinder is harnessed by an all-dancing, all-wheel-drive chassis.

The Lambo Roadster explodes from a standstill to 100km/h in three seconds flat – that’s a mere tenth of a second behind the coupe. Zero to 300km/h is demolished in just over 25 seconds, with the car hitting a maximum velocity of 350km/h – with no roof overhead, if you dare. (Interestingly, Lamborghini hasn’t provided a 0-200km/h timing, but it’s probably pretty damn fast, too.) Keeping the sheer “fastness” stable is an active rear spoiler that deploys at 120km/h.

Every overtaking move is over the top, with the engine screaming in anger and the overtaken traffic in a state of shock. Thanks to the Aventador’s AWD, 700bhp of acceleration feels less scary than in a rear-drive supercar of similar power, such as the 740bhp Ferrari F12. Huge 400mm carbon-ceramic brakes haul the car down from 100km/h in just 31 metres.

Like the Aventador coupe, the Roadster offers three drive settings – Strada, Sport and Corsa; respectively wild, wilder and wildest. Strada is for normal day-to-day usage (although piloting a Lambo is hardly “normal”), Sport is for greater entertainment behind the wheel, while Corsa is for crazy fun on road and track. Powerful carbon-ceramic brakes, sized 400mm in the front and 380mm in the rear, enable the Roadster to stop “fast”.

In Strada mode, progress is smooth, with longish pauses between gearchanges. Software changes have made the reapplications of torque in “auto” gentler compared to the original Aventador. It even keeps a lid on engine noise along the way. This Lambo is no Lexus in terms of smoothness, but it’s pleasant enough for city driving.

In Sport mode, the torque split is biased 90 per cent to the rear, so the car behaves more like a rear-drive devil. Indeed, the driver will be made acutely aware of how his right foot affects the attitude of the vehicle in corners. At the same time, the electronic nanny will let the driver experiment a bit more, and allow a modicum of oversteer at the limit. It can be a bit unnerving, though – at least on the long banked oval of Homestead-Miami Speedway, where the monster moved around in accordance with my right-foot input. 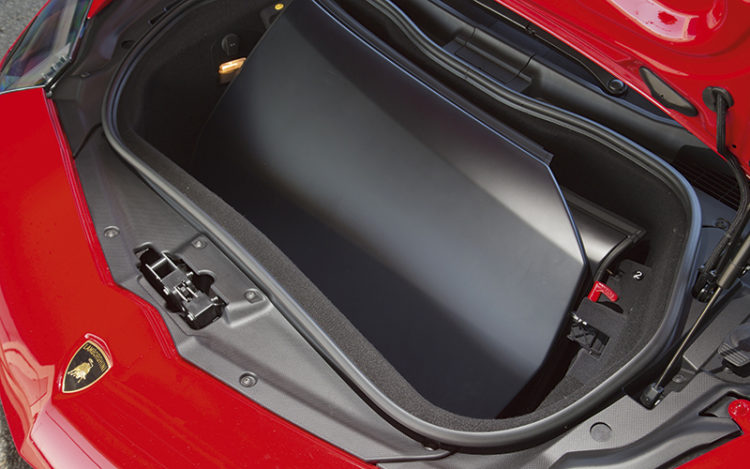 With the roof panels stowed in the front compartment, there’s just enough space for a takeaway pizza or two.

In Corsa mode, the car feels more controllable, with computers sorting out the torque supply-and-distribution far better than any “right foot”. It shuffles up to 20 per cent of the engine’s great energy to the front wheels, thereby maximising traction and minimising mid-corner “distraction”. The electronic nanny will also loosen up more than in Sport, but it’ll intervene to save the day if the driver messes up – assuming the entry speed isn’t excessive.

Despite Corsa being the most extreme setting, it doesn’t make the ride punishing, so it can be enjoyed every day – without backache or headache. But you’ll have to work the paddles all the way, with Corsa being manual-only, and the DIY shifts are very aggressive. If you need fully automatic gearshifting, switch from Corsa to Sport, but your involvement in the action would be reduced accordingly. In any case, I prefer Sport to Corsa, because the former gives me most of the thrills without much effort on my part – i.e. I don’t have to mount a 10/10 attack on a racetrack to have a ball in the Aventador. The auto gearbox plays along, shifting enthusiastically at the redline and changing down promptly when braking into a corner so the committed driver can accelerate out in a blaze of V12 glory.

In the suspension department, the inboard Ohlins dampers and springs have a fixed setup that can handle a wide variety of scenarios, whether street or track. This depth of ability is nothing short of amazing, negating the need for electronically controlled damping and other complicated devices. The purposeful gumball tyres are Pirelli P Zeros. 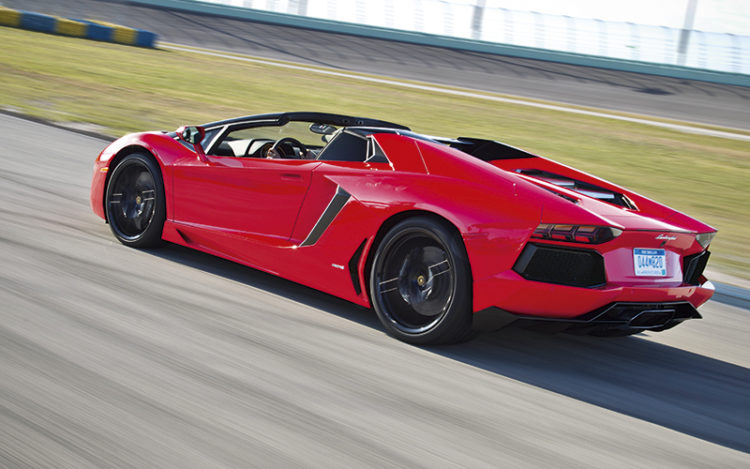 With the two carbon panels in place, the Roadster cockpit feels exactly like that of the coupe. The two Aventador models share the same dashboard and whatnot, with the primary difference being the extra “headroom” in the Roadster. With the roof panels taken off, the striking interior is literally on show. The seats are sized and shaped for large-frame occupants, so the average Asian might feel less strapped-in than he’d expect, especially when he’s playing Rambo on the road in the Lambo.

The instrument cluster is a comprehensive full-colour LCD panel, with graphics that can be changed to suit your fancy. The alphanumerics are easy to read even in bright sunlight, which is crucial for a convertible. There are many ways to customise the cockpit’s colours and materials, but thankfully wood trim isn’t available.

The Aventador LP700-4 already occupies a special place in the supercar arena, being a series-produced V12 mid-engined, all-carbon machine, and the Roadster spin-off makes it even more special, more spectacular. The Lamborghini flagship is a decadent supercar through and through, and losing the roof makes it even more exciting. 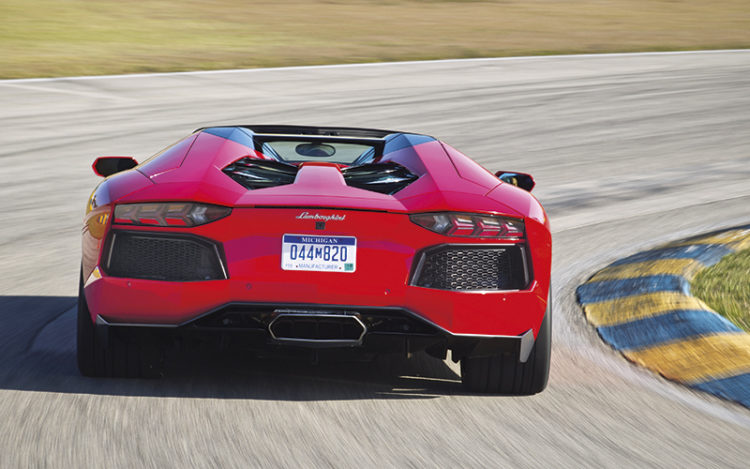 This article was first published in the April 2013 issue of Torque.