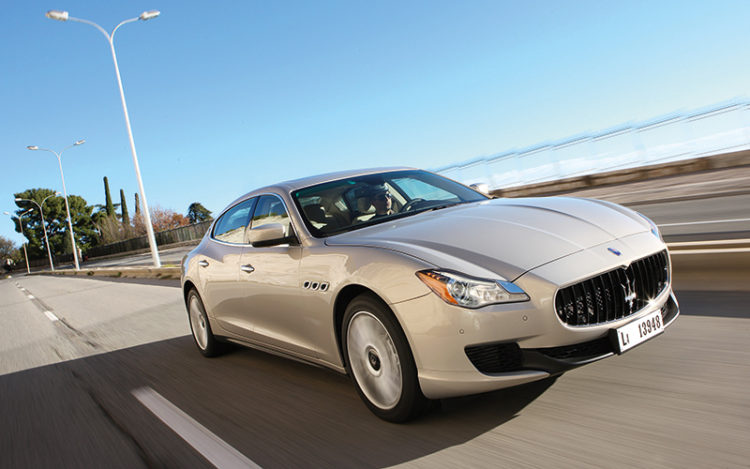 The Quattroporte (“four doors” in Italian) is the closest thing to a Ferrari saloon for the sporty towkay – who switches easily between a business suit and a track suit. In its 2013 form, the Quattroporte (or QP) is not only the fastest and most powerful four-door in the history of Maserati, but also its most fuel-efficient. And the Ferrari connection is closer than ever, with the Maranello marque assembling the Quattroporte’s all-new 3-litre V6 and 3.8-litre V8 engines.

The design, expertly done in-house, is an evolution of the predecessor’s Pininfarina styling, which has worn well throughout its nine-year lifespan. Chief designer of Fiat Centro Stile, Lorenzo Ramaciotti, had a hand in shaping that car, so the evolutionary exterior comes as no surprise.

According to Maserati stylists, the new look is a “morph” of yesterday’s Quattroporte and today’s GranTurismo coupe. The signature triangular C-pillars bearing the trident emblem, and the three side vents behind the front fenders have been updated and retained, along with a long bonnet to accommodate the V8. Nestled in a front-mid configuration, the engine allows an extremely short front overhang. The body also boasts a 12 percent cut in drag and a 24 percent reduction in lift. 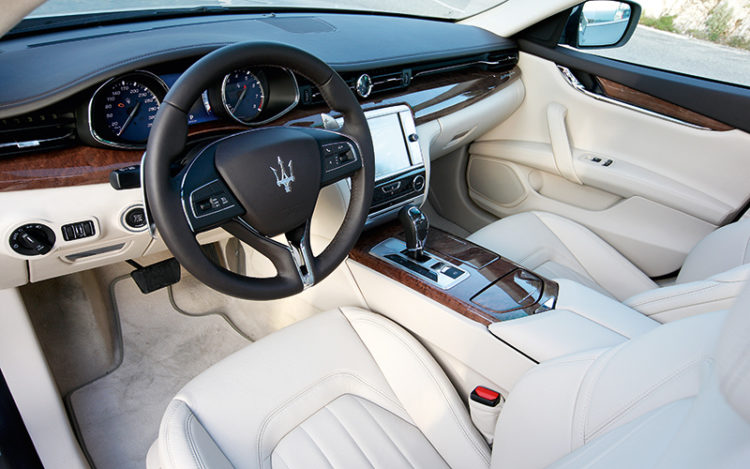 Few flagships have such a lovely combination of leather, metal, timber, and digital amenities.

The Quattroporte’s monocoque is a rigid mixture of steel and aluminium, the latter used for the bulk of the external panels, including the doors, bonnet and the boot lid. And the front of the chassis is based around an aluminium subframe. If Maserati had stuck to conventional materials and methods in the car’s construction, the QP would have tipped the scales at over two tonnes instead of 1900kg, which is 100kg lighter than the previous model.

At just over 1.48m in height, the car isn’t quite as low-slung as the 1.42m Porsche Panamera, but the Maser’s metalwork appears muscular and its wheelbase actually stretches further than that of the Mercedes S-Class “L”. In fact, the whole car is longer than the archetypal German limo, even though it looks more compact than that. Only when manoeuvring the Quattroporte through the narrow streets of Nice is its size obvious.

In the boiler room, Maserati has returned to turbocharging after more than a decade of naturally aspirated (NA) power. Compared to the 4.7-litre NA unit, the new twin-turbo 3.8 V8 has ditched almost a litre of displacement. There is also a second engine choice now – a 3-litre V6 with two turbos, too. Both powerplants are made at the Ferrari factory. 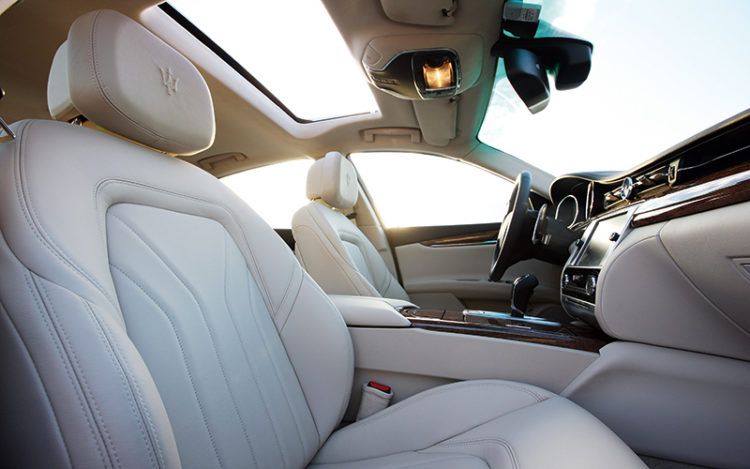 The styling combines the best of yesterday’s quattroporte and today’s Granturismo coupe.

The V8 produces 530bhp and 650Nm, respectively 90bhp and 160Nm more than the highly tuned V8 in the outgoing Quattroporte Sport GT S. An overboost function bumps up the torque output to 710Nm during full-throttle acceleration, between 2250rpm and 3500rpm.

Interestingly, there is also a driver-selected “underboost” mode called I.C.E. (Increased Control and Efficiency), which moderates the engine power by 60bhp, drops the torque at each gear’s take-up point, and softens the throttle pedal response. The objective is to improve consumption and reduce emissions, while smoothening the delivery of energy and minimising wheelspin on low-grip surfaces. MTC (Maserati Touch Control) is user-friendly, but its graphics and interface were “donated” by the Chrysler 300C.

The 3-litre V6, which shares most of its core components with the 3.8 V8, develops 410bhp and 550Nm, the latter “flat” between 1500rpm and 5000rpm. Like the V8, this V6 employs direct injection, high-tumble cylinder heads, four cam phasers and a pair of parallel twin-scroll turbines, each with its own air-to-air intercooler mounted away from the main radiators for a constant supply of fresh air.

Honestly, a 6-speed automatic would have been adequate for a turbo powertrain with a wide torque band, but it might have looked antiquated among luxury cars with more gear ratios. As such, ZF and Maserati put eight cogs into the casing. 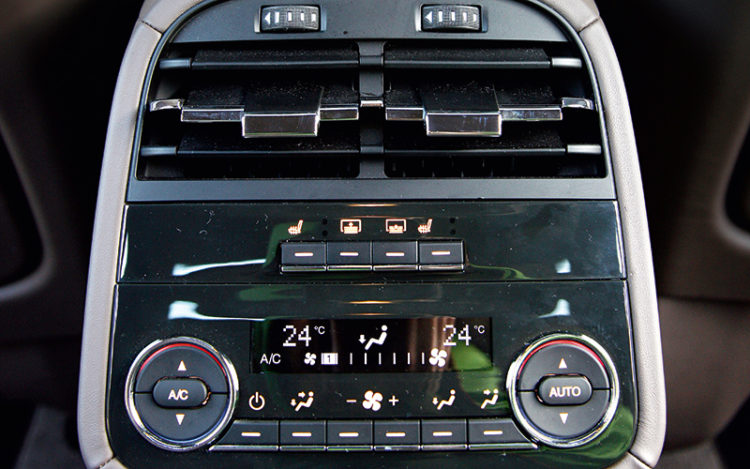 New climate control system cools down (or heats up) the cabin much faster than before.

This torque converter auto has been engineered for a 7200rpm engine redline and shifts in 125 milliseconds – about as rapid as Ferrari’s F1-Superfast gearbox and the fastest dual-clutch transmissions. Yet, it is silky smooth when “shifting” through town. Most importantly, this new autobox means RIP for the DuoSelect automated manual (and good riddance).

The Quattroporte remains rear-drive, but Maserati sprang a surprise by announcing an all-wheel drive option meant for winter/snowy countries. The driveline in this case is a real-time, electronically controlled multi-clutch that diverts up to 50 per cent of the torque to the front wheels when it encounters slippery conditions, but most of the time it is entirely rear-wheel drive. 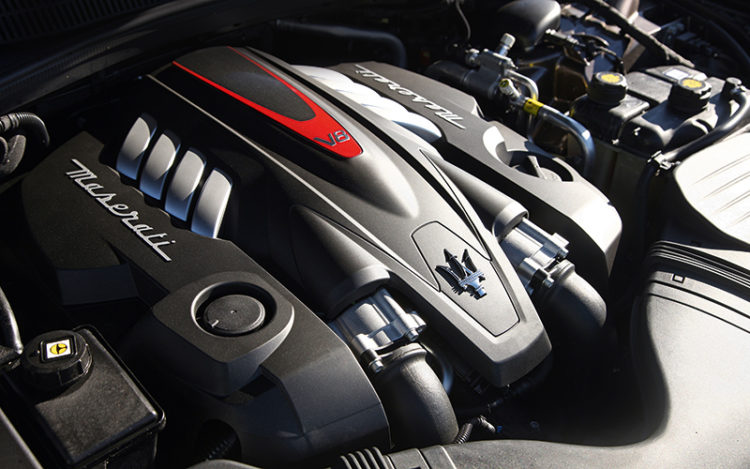 Ferrari-built 3.8-litre V8 is a potent performer, but its double turbos mute the exhaust note somewhat.

On the go, the new QP initially doesn’t feel much quicker than the old model, and its century sprint timing supports this seat-of-the-pants feeling – 4.7 seconds versus 5.1 seconds. But beyond 100km/h… 150km/h… 200km/h and so forth, the difference in acceleration and response becomes increasingly distinct. The run-out GT S reaches a maximum speed of 285km/h (which is also where the newly introduced 3.0 V6 QP calls it a day), but the 3.8 V8 QP continues to dash ahead until it hits 307km/h. The only Maser with a higher top speed is the mighty MC12 homologation special, which can reach 330km/h.

The 8-speed ZF “automatically” obliges whenever hard acceleration is called for, and it even provides launch control, although it is less aggressive than how the defunct DuoSelect “launches”. Paddle-shifters let the driver override the system and decide his own shift points, but there is a Sport auto mode that should be speedy enough for the petrolhead-in-a-hurry. 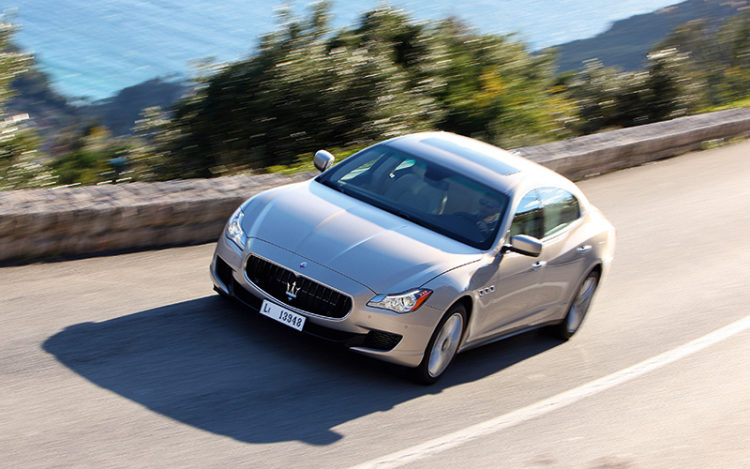 With its sexy body and racy character, this is undoubtedly an Italian supermodel.

The automatic is always slick in its actions, and with two more ratios than the earlier 6-speeder, the lower gears were optimised for better acceleration while the 8th gear was made an overdrive for quieter, more economical cruising. Indeed, despite a smaller fuel tank (80-litre instead of 90-litre), the new QP can travel over 670km on average before needing a refuel – around 100km further than the retired QP.

The suspension is mostly alloy, with steel springs and Maserati’s Skyhook adaptive damping. The Skyhook system now works faster and more accurately, with its default mode prioritising comfort, although the ride quality is always closer to that of a serious sportster than a boulevard cruiser. Press the suspension button (with a damper symbol) alongside the gear lever to stiffen the ride and sharpen the handling. 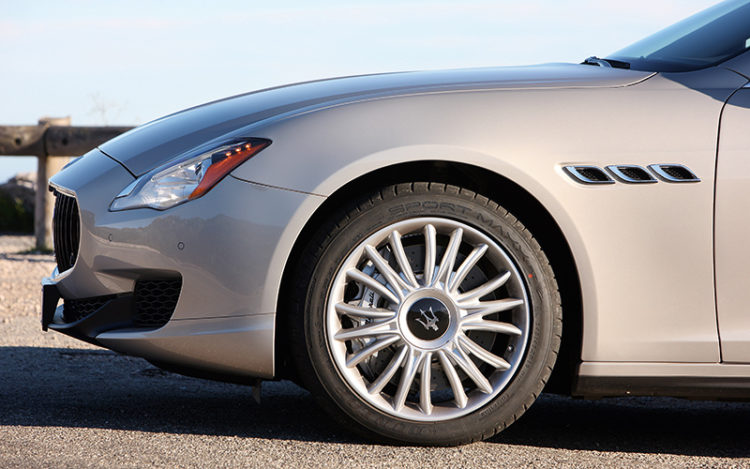 The QP is a big beast occupying much of the lane, so it prefers wider open roads where it can perform in earnest. Even so, the large saloon is nimble enough to tackle a mountainside switchback. It handles in a more focused manner than its predecessor, yet its overall performance is more refined.
On the standard 19-inch tyres, the ride strikes a good balance between “speedboat” and “luxury liner”. Specify the 20-inch or forged 21-inch wheels for sharper cornering and/or a snazzier appearance, but be prepared to sacrifice the nicely balanced ride.

The QP’s strong suit is high-speed, high-mileage touring. It is comfortable over long distances, yet composed over short bursts of twisty tarmac, with the car tracking true all the way. The steering is tack-sharp and positive, and delivers more feedback than the previous rack. Also welcomed by the keen driver is the retention of servo-hydraulic steering, which “feels” more natural than the usual electric affair. At the same time, the power assistance and steering ratio have both been reduced for greater involvement behind the wheel. 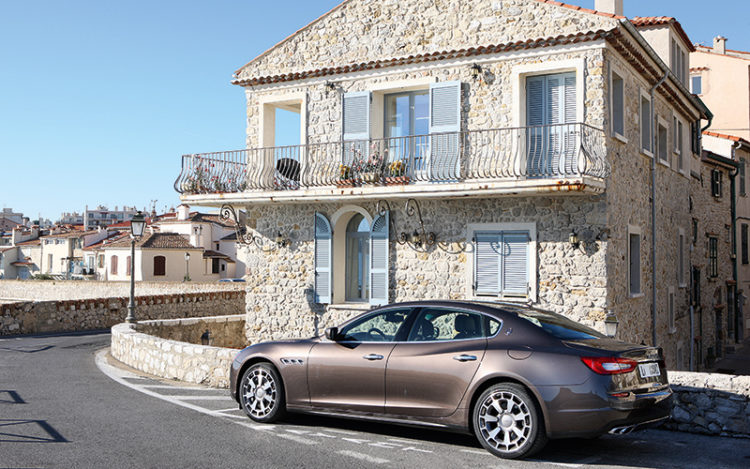 The rest of the cockpit is nothing less than a revolution for the Quattroporte. While the previous cabin comes across as slightly stark, the new one is clearly lush. It’s fine Italian furniture, made even finer and placed in a “wrap-around lounge”. And there’s significantly more lounging space than before, thanks to the stretched wheelbase and generous interior dimensions.

The dashboard’s wood veneer (which extends to the door panels) and analogue oval clock are old-school, but the 7-inch TFT multi-function display in the instrument cluster and the 8.4-inch touchscreen on the centre console belong to the modern era. That main monitor, called Maserati Touch Control (MTC), centralises the operation of key equipment such as the Garmin GPS, multimedia player, radio, telephone, Wi-Fi hotspot hosting (for up to three devices in the car) and air-conditioning. MTC also manages the vehicle settings. 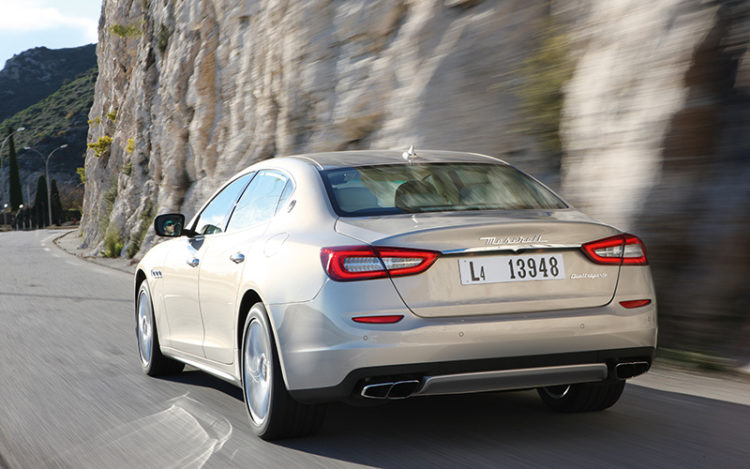 The “highest” hi-fi option is a Bowers & Wilkins system with 15 loudspeakers, a 16-channel 1,280W amplifier and sophisticated surround sound. This delivers as much music as your ears can take. Also available is a rear-seat entertainment unit with a pair of tiltable 10.2-inch LCD screens, an AV-in connection for gadgets, a television tuner, individual remote controls and wireless headphones.