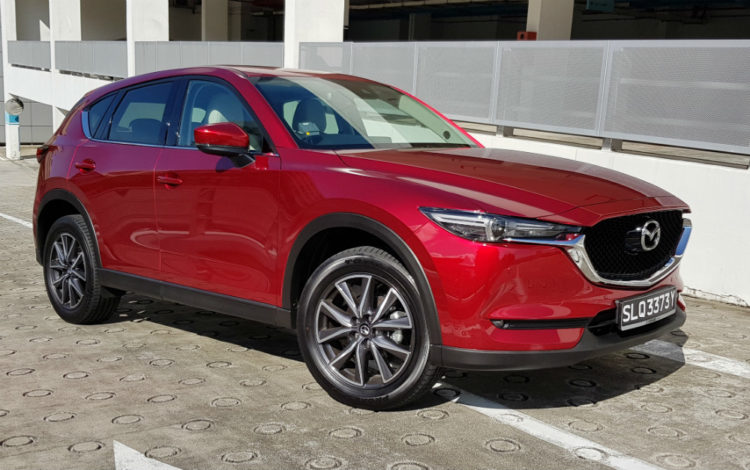 New models tend to be bigger, flashier, more powerful and better equipped than their predecessors, and often, in exaggerated measures.

Not the Mazda CX-5. The second- generation model is about the same size as the first one, although it sits lower. This gives it a more dynamic stance and, in turn, a bigger presence without a bigger footprint.

Design changes contribute more in this respect. Origami-like folds and crease lines create a play of light and shadow, giving the body a more dramatic and edgier twist. Next to it, the former CX-5 – already considered sporty in the crossover segment during its day – looks bland and blobbish.

The bonnet of the new car does not merge with the grille, but instead leaves a slight gap. This gives the impression of a hood shielding the car’s countenance, adding a tinge of stylistic tension that makes the car more interesting to look at.

It is not a flashy design, but one that works exceedingly well in projecting dynamism and youth.

The car has the same 2700mm wheelbase as its predecessor – not extraordinarily generous in today’s context, but still fairly adequate. But its boot has been tweaked to offer more usable space than before.

Rear air-conditioner vents, a motorised tailgate and a head-up display are about the only additional features you will find onboard. Nothing revolutionary, but they make the Mazda more competitive now.

The CX-5’s drivetrain remains largely unchanged. Compared with the facelifted version of the previous generation car, it has 2bhp and 1Nm more. But the new car is also about 30kg heavier.

Yet, it is quicker in the century sprint (8.9 seconds versus 9.2 seconds), presumably from changes to the transmission (Mazda was unable to say at press time).

But the biggest changes are obvious only when you get behind the wheel and drive the car. The new CX-5 comes across immediately as livelier in day-to-day situations and noticeably more refined than before. Its steering is sharper and more direct too.

The car’s weight gain no doubt is partly attributable to more insulation and improved materials onboard. If that has degraded its fuel efficiency, it has also allowed the car to weather pits and bumps better and to keep road buzz to a minimum.

It is still a car which thrives on higher revs, though. That is, compared to the expanding league of turbocharged choices with their ridiculously small engines which push out enormous amounts of torque from near-idling speeds.

The 2.5-litre variant tested here may seem oversized in today’s world, but its real-life fuel consumption (around 10km per litre) in Singapore is no worse than what is clocked by many small turbos favoured by the German brands.

In the ride and handling department, the car is as pleasing as its predecessor. The CX-5 has a taut and well-tuned chassis (even when compared with European contenders) which makes it a joy to navigate around bends. Its refinement is an added sweetener.