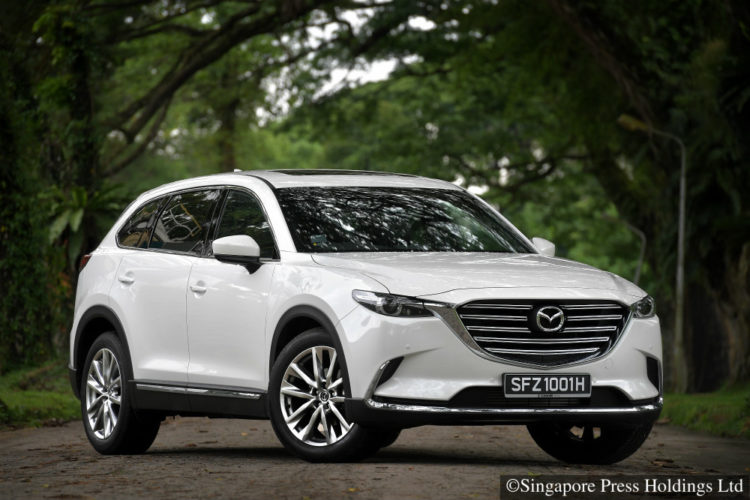 This is weird to say, but the bloated bus-sized new CX-9 suits Mazda’s “Zoom Zoom” tagline better than any other model.

Hear me out before you hurl that rotten tomato.

To start, it is not too difficult to make a small, tight roadster appealing. Have the right proportions, slot in a half-decent powertrain, throw in nice rims and you have yourself a heart-melting number.

But to make a seven-seater crossover that exceeds 5m in length, almost 2m in width and weighs around 2 tonnes go “zoom zoom” is challenging – like making a hippo as swift and graceful as a gazelle.

That explains why the previous CX-9, as well as many other cars like it, are not exactly pinnacles of driving pleasure.

The new CX-9 is quite different. It is built on Mazda’s own SkyActiv platform, unlike its predecessor’s Ford-based chassis. As anyone who has driven a modern-day Mazda will attest, the SkyActiv template works. It delivers dynamism, coherence and comfort.

This alone puts the big crossover in good stead.

Next, the car is powered by a turbocharged 2.5-litre four-cylinder engine. Compared with the pre-historic normally aspirated 3.7-litre V6 in the previous car, this smaller powerplant is a gem.

Most relevant to drivers here is its abundance of low-end torque. The forced induction engine – Mazda’s first modern turbocharged one – develops 420Nm of torque from 2000rpm, versus 367Nm at 4250rpm in its predecessor. And that makes a world of a difference. 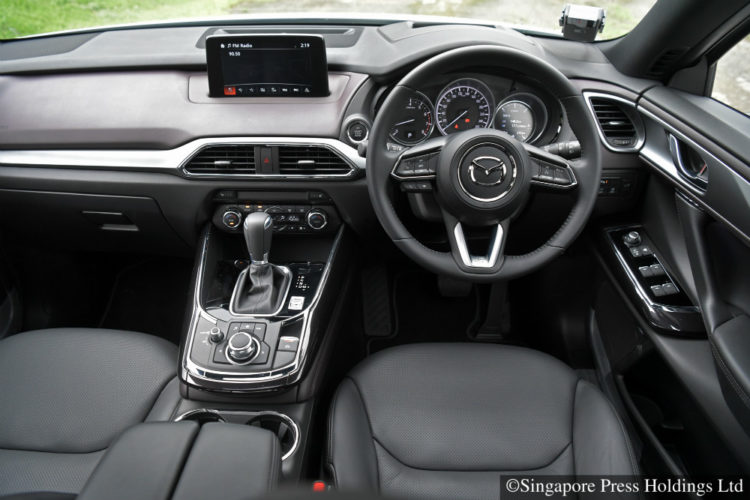 Zero to 100km/h is done in 8.2 seconds, down from 9.9 seconds previously. But at the wheel, you would swear the massive Mazda would keep up with a Mazda MX-5. (Actually, it is quicker than the MX-5 RF.)

Throttle response is crisp and acceleration is smooth, linear and seemingly relentless. Even on highways, the big car will exceed the speed limit easily without you noticing it.

The new CX-9 handles steering inputs like a well-polished hatch, leaning into hard corners predictably and righting itself when the tarmac straightens with minimal post-turn movements. It is, I dare say, rather entertaining.

Braking is another area the seven-seater excels in. The car sheds speed without betraying its heft and again with a suspension which filters a lot of diving and pitching from the cabin.

With this car, Mazda is well placed to tap into the relatively new and fast-growing full-size seven-seat SUV market. Its predecessor was just uncompetitive.

The latest car is also made more attractive with a decent equipment level. It comes with folding rear seats, powered tailgate, cruise control, adapative LED headlights and a slew of safety features.

You will find blind spot monitoring, lane departure warning with active lane-keeping and autonomous braking, rear cross traffic alert (which helps you back out of a driveway or parking space), and electronic parking brake.

Visually, it is as imposing as before, but far better-looking. The first thing you notice is how prominently and aggressively its bonnet and grille section juts out – almost like a battering ram.

Should Mazda ever change its tagline to “Boom Boom”, this would be the perfect poster car.