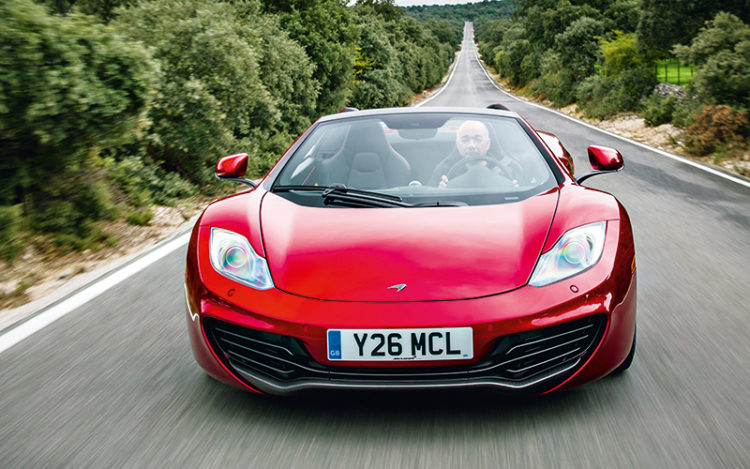 McLaren Automotive is a relatively new face on the car-making scene, although it has been racing for ages in Formula One, with some of the team’s greatest successes achieved in a four-year period from 1988 to 1991.

In 1992, the first McLaren road car was launched – the F1, brainchild of the gifted Gordon Murray. Truly groundbreaking, the V12-powered carbon three-seater remains one of the fastest and finest-engineered supercars of all time. The next project in 2003, the Mercedes-McLaren SLR, also boasts explosive performance but is less innovative than the seminal F1.

A few SLR spin-offs, including a roadster, drove rich petrolheads to distraction while McLaren formulated its in-house follow-up to the F1 – the MP4-12C coupe, introduced in 2011.

Just 18 months later, the 12C has been “turned into” a convertible, and we test it here (headgear optional).

The two 12Cs look the same from most angles, having been developed as genetic twins from the start. Even the foldaway roof is cleverly “camouflaged” when it’s up, apart from the dual buttresses incorporated with a tonneau cover. The space underneath, when it’s not used to stow the two-piece canopy, can hold a pair of 26L overnighters (designed by McLaren and delivered together with the car). Another 144 litres of cargo room is found under the front bonnet.

Remember to bring along sunglasses and sunblock – not only to protect your eyes and skin from blazing sunlight, but also to look cool while driving this hot number. With its roof down, the 12C Spider looks a lot sexier than its coupe sibling, whose styling has been criticised by some as being too meek.

This topless show should silence those critics. Keeping them quiet is the extra-cost customisation offered by McLaren Special Operations (MSO), which includes aggressive carbon fibre addenda that really sharpen the appearance of the vehicle.

Under the Spider’s skin is the coupe’s MonoCell carbon monocoque chassis, which doesn’t depend on the roof structure for rigidity, thereby allowing the exact same powertrain and suspension to be employed, and the same performance and handling to be enjoyed. Identical, too, are their composite body panels and front/rear, impact-absorbing aluminium extrusions. Weight-wise, the Spider is just 40kg more than the coupe, on account of the hard-top, its mechanism, the steel roll-over hoop hidden in the front of the buttresses, and the Spider-specific exhaust system that’s 2kg heavier than the coupe’s. A conventional “chop job” that requires structural strengthening would entail a 100kg weight gain at least.

That extra 40kg is no big deal for the M838T twin-turbo V8, which has been uprated from the original 592bhp to an even stronger 616bhp for the Spider (and the 2013-spec coupe) across a considerable portion of the rev band, without affecting fuel consumption and exhaust emissions. 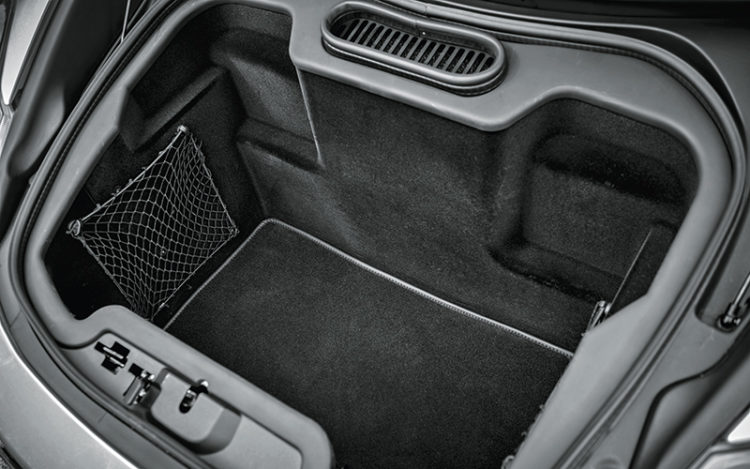 Plenty of space to stash your stuff, such as Spider-Man DVDs.

By the way, owners of the earlier 592bhp MP4-12C (to use its clumsy “old” name) can drive into their McLaren dealership for a complimentary firmware upgrade that would boost the horsepower, plus revised transmission software that would make gearchanges even faster and smoother.

In the customary century sprint, the 12C Spider is as speedy as the 12C coupe, stopping the clock at just over 3 seconds. The Spider’s maximum velocity (where permitted) is 328km/h, a bit lower than the coupe’s 330km/h due to some natural turbulence over the engine cover area.

That 2km/h “shortfall” is insignificant compared to how nicely the 12C Spider accelerates (from any speed), and how incredibly it decelerates (again, from any speed, on road or track). The SSG 7-speed dual-clutch gearbox performs flawlessly and even more rapidly than before, although the paddle-shifters might be too sensitive for butterfingers.

In the 12C deceleration department, the party trick continues to be the McLaren Airbrake, derived from F1 but banned from the motorsport for giving an unfair advantage. This is an “active” rear wing that “raises” its angle to increase downforce, enhance stability through corners and improve stopping power. 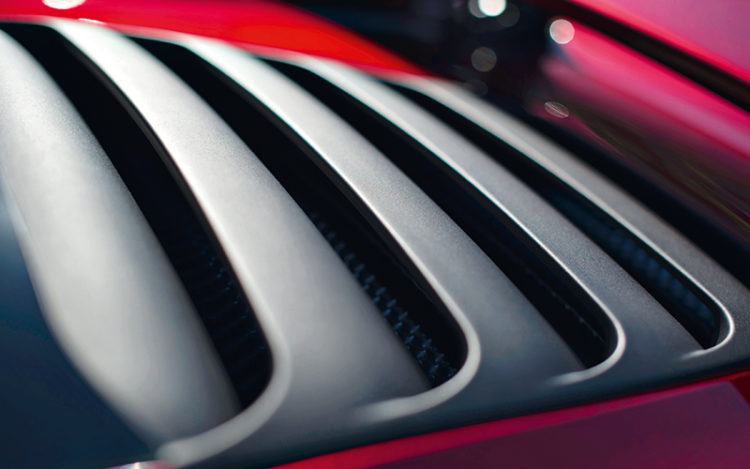 The car still wriggles a little when braking hard from great speed, but it’s nothing to be alarmed about, and it might be worse without the Airbrake. It’s also operational during high-speed cruising, making the vehicle more stable, which is clearly felt through the steering.

While not as chatty as the rack in, say, the Lotus Evora, the Spider’s steering is direct, positive and perfectly weighted. Every turn of the wheel is translated into animated action, with no “dead zone” at all. Despite this immediacy, the 12C never feels nervous when changing direction, and it can be placed precisely in the lane of your choice at 200-250km/h, or even faster for that matter.

The Spider’s suspension is another revelation. As mentioned earlier, it’s exactly the same “underneath” as the coupe, which means double wishbones with soft springs (by supercar standards) and hydraulically interconnected adaptive dampers that double as anti-roll/anti-pitch devices.

Electronic sensors monitor the movements of the body, chassis and wheels, and vary the damping accordingly for optimal handling. 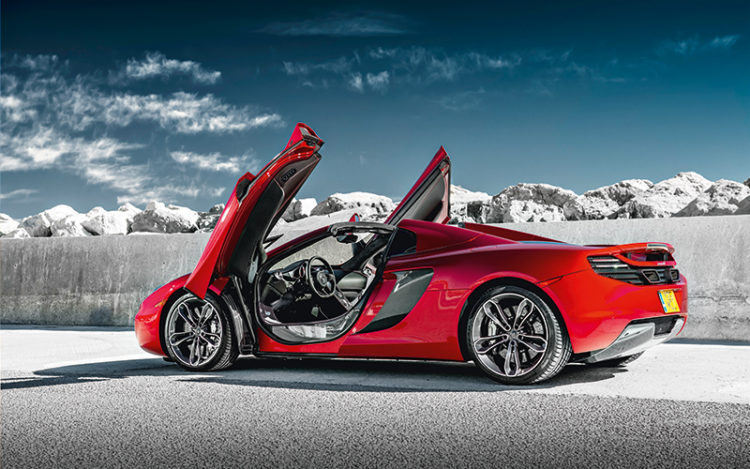 On the dashboard’s console “spar”is a H (for handling) knob, with a similar one marked P (for powertrain) alongside, that lets the driver select one of three settings – Normal, Sport or Track, which are all self explanatory to the enthusiast.

Harder to explain is the uncommonly good ride comfort. The extremely rigid, carbon fibre MonoCell plays a key role in this, together with the ProActive Chassis Control. The ride quality is pliant and bumps are simply shrugged off, yet the controllability is first-rate and the grip from the P Zero Pirellis is fantastic.

This Spider really sticks to corners, especially in the stiffest Track mode (which, incidentally, doesn’t deliver a bone-jarring ride), and resolutely refuses to lean. There is more body roll in Normal mode but not excessively so, and this setting has the further benefit of tackling undulations happily. Sport, the in-between mode, is probably the best compromise – it’s comfortable enough for daily driving, yet it doesn’t dilute the rich driving experience. 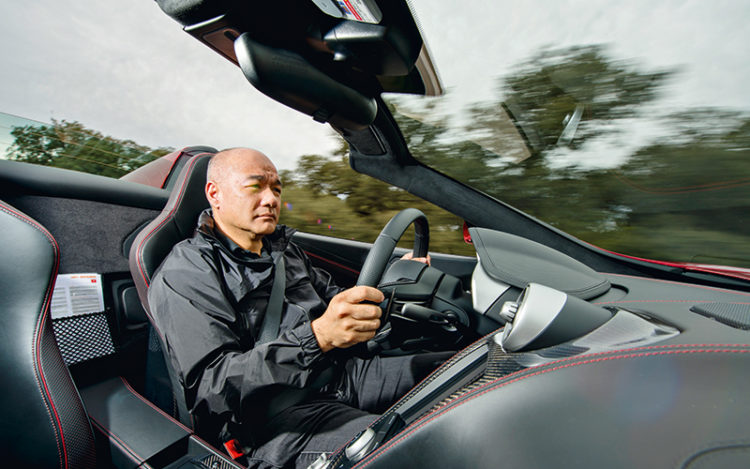 Our supercar reviewer enjoying some wind in his hair – sort of.

It’s rich and it’s quick. McLaren claims the 12C Spider and 12C coupe have similar lap times around the UK’s Dunsfold circuit. On the Spanish racetrack of Ascari where I am, the Spider displays an impressive breath of abilities.

At the limit, the car’s composure is brilliant, and the clear way both ends drift in unison and signal their intentions is a real boon to “heroic” drivers. Turn-in is immediate, there is no understeer, and the 12C always stays on the chosen cornering line.

When you do breach the limit (easy with over 600bhp fed to the rear wheels), the “penalty” is meted out progressively, so you only need to keep your cool, be steady on the gas pedal and countersteer to get back into the game.

Part of the gameplay is the soundtrack. There’s an Intake Sound Generator (ISG), also present in the coupe, that controls the V8 intake noise heard from the cockpit. It gets increasingly racy as the Powertrain mode is switched from Normal to Sport to Track, with the driver able to pick his preferred noise level through a digital menu in the instrument cluster. The Spider-specific exhaust system, which has been modified to suit the harmonics of the convertible body shape, makes the engine sound even racier. 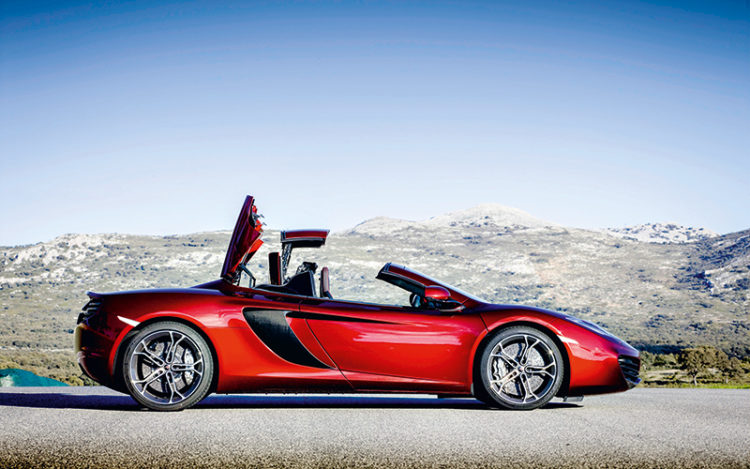 The Spider has another special “musical instrument” that the coupe lacks – a vertical rear glass panel that can slide up/down independently of the retractable roof. When the Spider is in its closed configuration, the V8 sound is a distant drone, ideal for uneventful expressway journeys.

Drop the rear window just a few millimetres and the V8 sounds a lot closer. Open the window completely and the revving engine sings right into the air-conditioned cabin. For fresh air and blue sky, just drop the top, with the rear window doubling as a wind deflector. This is the Spider’s “window” of sales opportunity, so to speak. I expect it to outsell the coupe, in any case, because it is well worth the reasonable five per cent premium. It does everything the 12C is capable of, but adds a different dimension that makes the whole package even more compelling. McLaren’s contribution to “British aerospace” is undoubtedly a stratospheric automotive achievement.