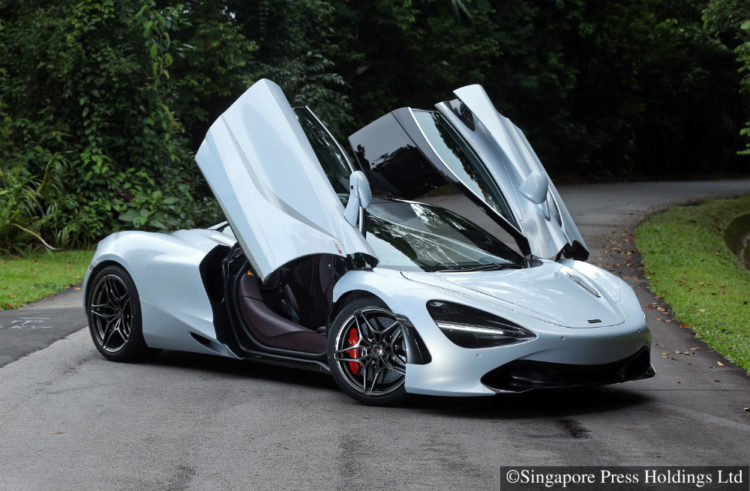 The first thing you notice about the McLaren 720S is its sensational styling – a visual feast of flowing organic lines which sets it apart from the hard-edged Italian supercars.

The second thing as you open those butterfly doors, which are surprisingly light to operate, is the heady waft of leather. Only a Rolls-Royce can match that scent.

The third thing you notice is the sound of the beast. Leave that door open, punch the red start button and feel the hair on the back of your neck rise.

With bazooka-sized exhausts mounted above the bumper, the V8 soundtrack – with a unique signature of its own – is that much closer to your ears.

Beyond these, things become a blur. Not because the newcomer bent on upsetting supercars like the Ferrari 812 Superfast and Lamborghini Huracan Performante 5.2 is bland or boring though.

Quite the opposite, the 720S is the most capable, most engaging and most thrilling McLaren there is today. It is precisely because of this that the driver – already giddy from sensory overload – has a challenging time soaking in the performance and driving sensations afforded by this lightweight mid-ship racer.

It is a happy problem. You can ease yourself into the task, by selecting the Comfort drive mode first. But even in this mode, the car is ferocious if you are not judicious with the throttle.

Things dial up a notch in Sport mode, with the steering a little tighter and engine a little edgier. 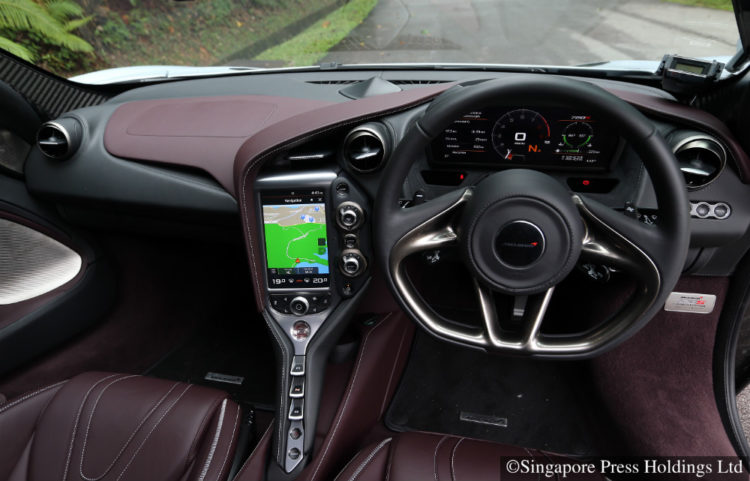 In this mode, the car’s digital instrument tablet flips down like a knight’s helmet to show only speed and revs through a horizontal slit. A really cool feature.

The other cool feature is the car’s sizeable rear spoiler rising in Track mode.

There are slight variations to ride quality in each mode, but not enough for you to pick an adjective other than “firm”.

These rubbers are optimised for track work. With the car’s low and wide stance, they provide a nice mix of stickiness and dynamism in the dry.

The 720S feels really easy to control and confidently fast around bends with minimal intervention from the brakes.

But in the wet, those fat 305’s can be a handful. Open the throttle a little too wide or too quickly and the tail wiggles.

Like most supercars, the 720S offers an exhilarating, adrenaline-drenched experience.

But it can also be hard work.

On long hauls, the drone of the engine, the road noise (on account of the cockpit’s proximity to the tarmac as well as those sizeable tyres) and the hard suspension take a collective toll.

It is, however, a breeze to park, thanks to a super camera system.

The car is best enjoyed first thing in the morning, when a 30-minute spin wakes you up better than a triple-shot espresso or a gym session.

Are there things which mar the experience? Yes, but they have nothing to do with the chassis or the drivetrain.

These include swathes of raw carbon-fibre panels on the door sills which make the car look unfinished, metallic air-con vents which appear to have tarnished and seat adjustments which require you to have long slender fingers to access.

Also, the aerodynamic flow-through cowling on the doors is a dirt magnet, trapping road grit churned up by the front wheels.

No issue, if you have someone to wash the car every day.

Despite these, every hot-blooded petrolhead with the means will find it hard to trade half an hour in this car for most other earthly pleasures.