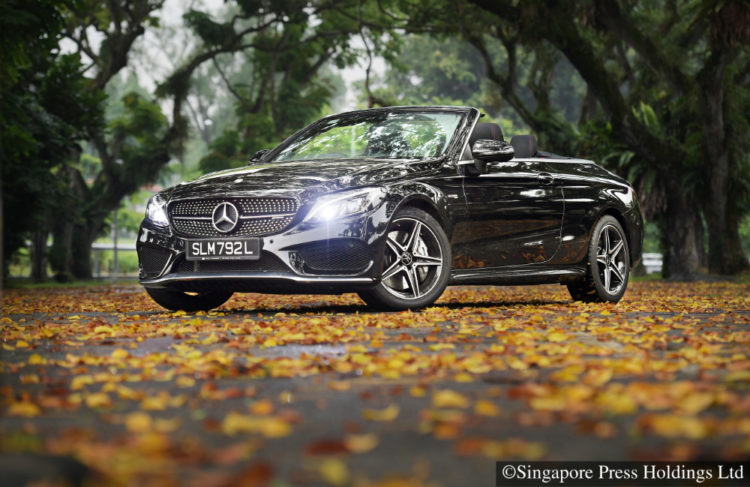 They no longer feel like they are sitting on stouter springs that support their heftier bodies. And they no longer betray the body flex that inevitably results in creaks and squeaks when the canopy is up.

The Mercedes-AMG C43 Cabriolet is a fine example of that engineering mastery. For day-to-day commutes, the car is practically indistinguishable from its sedan twin, except for a bit more external noise that permeates its fabric top. (You can opt for the acoustic roof, which should have better insulation.)

But the road and wind noises are not so intrusive that you need to turn up the hi-fi or raise your voice.

And when the roof is retracted, the car is in its element, dishing out performance you can feel on your skin and amplifying the accompanying soundtrack by a thousand watts.

The topless gremlin, however, lies dormant, awaiting the moment it can rear its ugly head.

In the case of the C43 Cabrio, that moment arises when the car is speeding up a ramp onto a viaduct one sunny afternoon and its right rear wheel encounters an uneven patch of tarmac.

For a split second, the rear axle feels a little unhinged. It is over in a wink, but if you were able to slow down the reaction with a high-speed camera, the C43 might just appear to be doing an automotive equivalent of the hula dance. 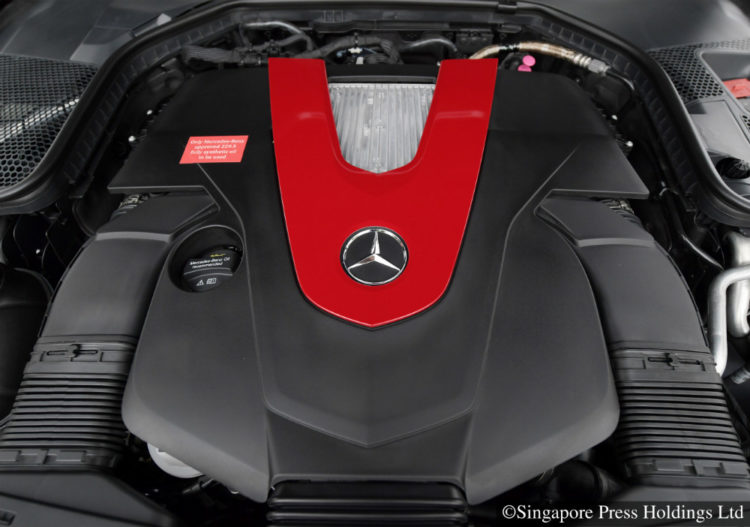 The wiggle may be minor, but it still leaves you feeling grateful that the car is endowed with an all-wheel-drive system, which is what allows you to gun the Mercedes’ turbocharged 3-litre V6 with abandon. Its substantial output of 367bhp is shared by four instead of two wheels, translating to slip-free take-offs and measured mid-stream acceleration.

The C43 Cabrio weighs in at a rather portly 1870kg – 180kg or 11 percent more than its compact sedan sibling of the same size.

Despite that, it is an exhilarating drive. Zero to hundred is delivered in a blistering 4.8 seconds, merely 0.1 of a second behind the sedan. It should be slower all round too – because of its heft and because its drag-coefficent of 0.32 is significantly worse off than the sedan’s 0.27. (The higher the number, the higher the air resistance.)

Of course, that is immaterial on Singapore roads.

Strangely, the car does not seem as driveable in Sport Plus mode as the sedan, coming across as too highly strung as the transmission finds insufficient room in the city to shift up.

The car is best enjoyed in Sport mode and with the top down. As with all AMG-tuned cars, its exhaust sounds good, but it could have been a tad louder at lower revs.

Its cabin is sportier than the sedan’s. The seats with integrated headrests stand out, as well as the automatic seatbelt feeders for front occupants – a real convenience.

Space is surprisingly adequate, even in the second row. The boot however, is a bit small, as expected of convertibles. Its capacity of 360 litres shrinks to 285 when the roof is stowed. (The sedan has 480 litres.)

But a convertible is not really about practicality, is it? It is about style, which the beautiful C43 Cabriolet has plenty of.