The Portugese region of Algarve possesses great driving roads, which meander around the hilly areas and the Autodromo Internacional do Algarve, a 4.69km F1-standard racing circuit in the town of Portimao. No wonder, then, that this southern end of Portugal is a favourite stomping ground for car manufacturers launching new models, especially the fast variants.

The international media launch of Daimler’s hottest C-Class model, the Mercedes-AMG C63, took place in and around Algarve, with some track time at the Portimao circuit.

The previous C63 has always been high on my list of most desirable high-performance saloons, because of its naturally aspirated 6208cc V8 that makes all the right sounds from the engine and exhaust, and its monumental acceleration that could scare many supercars. Compact dimensions contribute to the old C63’s capable dynamics, but it could get a bit rowdy in the wrong hands. Still, I would use the word “Charismatic” to describe that defunct AMG car.

The C-Class is technically in its fifth generation (the first, codenamed W201, wasn’t labelled as “C-Class”), and the current W205 model has thus far been sold in Singapore with 4-cylinder petrol engines only, the range-topper being the 2-litre C250. But soon, around the middle of this year, the big boss of the C-Class range will make its local debut.

Both the newly launched C63 and C63 S are available as a saloon or an estate. Either bodystyle has received styling enhancements that are unmistakably AMG.

Almost the entire width of the front bumper is filled with meshed grille to gulp as much air as possible, while the re-profiled bonnet is actually designed to form an air duct over the engine V-block when closed. All these move heat away from the top of the engine where the two turbochargers reside. In addition, there are no less than six heat exchangers for engine cooling, two intercoolers for the charged air and one oil cooler for the transmission.

Other external AMG tweaks include C-shaped recesses (with “V8 BITURBO” badges) on the slightly widened aluminium front fenders, a rear valance with diffuser fins and four exhaust tailpipes. There’s also a rear spoiler on the saloon, but it’s curiously slim and inconspicuous. The C63 is shod with 18-inch/18-spoke wheels, while the C63 S comes with 19-inch wheels.

Inside, much of the dashboard, switches and instruments are taken off the conventional C-Class, which is good because everything is ergonomically sound and beautifully fitted. The C63 gets its own set of main dials, though – a speedometer that reads to 320km/h and a tachometer with a 7000rpm redline. There are also additional buttons for the various driver-selectable Dynamic modes. Powered sports seats, crossed-drilled aluminium pedals and a chunky, flat-bottom steering wheel complete the C63 cockpit, with a selection of upholstery, decoration and seat options available.

The new AMG continues to be badged as “C63”, despite having an engine capacity of 4.0, or 3982cc to be exact. This is more bewildering than not calling the 6.2-litre predecessor “C62”.

Anyway, the powerplant is AMG’s all-new 4-litre twin-turbo V8, which was unveiled in the AMG GT sports coupe. It marks the demise of naturally aspirated AMG engines. But there is no need to lament, because this biturbo motor produces more power and torque than the old V8, even in the “base” C63, which can accelerate to 100km/h from a standstill in 4.1 seconds. And in case you’re wondering, yes, it manages to deliver that delectable V8 burble.

If the 476bhp and 650Nm (from as low as 1750rpm) are still not enough for the power-hungry petrolhead, there is the C63 S, tuned to 510bhp and 700Nm. The latter also has a console switch to activate an exhaust valve for an even fiercer growl.

The only gearbox available is the 7-speed AMG Speedshift, which is essentially the 7G-Tronic automatic transmission with a multi-plate wet clutch in place of the torque converter. The clutch set provides positive, no-slip mechanical coupling as opposed to the torque converter’s fluid coupling. As a result, the car’s gearchanges are quicker, and the engine management can control the clutch action in order to blip the throttle for faster, seamless downshifts.

On the Portimao racetrack, the C63 S with its drivetrain switched to Race mode (not available on the C63) and suspension set to Sport, is an absolute blast to drive. Not just because it has the power and brakes to spurt from corner to corner, but more so for its sharp responses to throttle and steering inputs. The car turns in with determination not to understeer, and it has plenty of grip to accelerate early at the exit point. It helps that the differential’s electronic control continuously apportions left-to-right torque.

Remember, there’s a hefty 700Nm of torque, readily accessible between 1750rpm and 4500rpm. Too much of it will, of course, break rear traction, but in my experience, it’s never a terminal situation because the chassis responds precisely to corrective steering.

Part of the S package for the C63 is a set of active engine mounts, which makes a difference to steering precision, according to AMG engineers. Each sealed mounting consists of a solenoid coil around a housing filled with a special fluid. When a current is applied to the coil, the fluid responds by altering its viscosity. An ECU selectively stiffens a mounting by injecting the right amount of current the moment a change in direction is detected, hence eliminating the inertia of engine roll that could cause a fractional delay between steering input and turn-in.

Out on the mountain roads of Algarve where powerslides are not recommended, both the C63 and C63 S work best in Sport+ mode. There is just a tad of rear wheel slip to let me feel exactly what the car is doing, and help me proceed confidently and rapidly over the sinuous roads.

The two AMGs are equipped with rear axle locking differentials (purely mechanical for the C63 and electronic for the C63 S) and their overall grip is terrific, which makes it easy to power my way out of every corner. This, perhaps, is the most significant driving characteristic that makes the new C63 superior to its predecessor. In other words, less rowdy but just as engaging, if not even more so.

Ride comfort is taken care of by AMG Ride Control, which electronically adjusts the damping to keep body roll in check and soak up the roughest tarmac with ease.

Interestingly, while the C63 S is the more focused driving machine (it even has a launch mode for finely calibrated take-offs), its advantage on Portuguese mountain roads is not as appreciable as I would expect. The C63 S is what I would need for track days, but at all other times, the regular C63 is all the German super-saloon I would want in a compact bodyshell.

The hot new C63 is devastatingly fast, sufficiently refined as a luxury saloon and, above all, a fabulously interactive driver’s tool. To me, there is just one word to describe it: Charismatic, with an emphasis on the “C”. 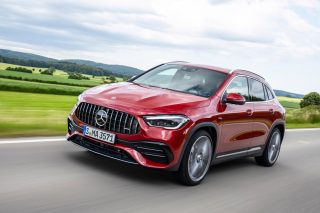