Mercedes-Benz B200 Sport is not quite there yet | Torque
Loading posts... 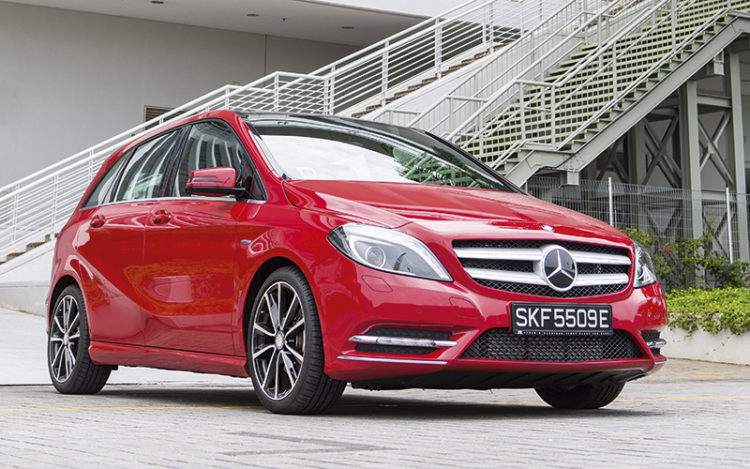 Mercedes’ first B-Class was a sort of A-Class Plus – a longer, even more versatile version of its clever small hatch. The second-generation B-Class, just launched in Singapore, sticks with this formula, which is all the more curious given that the new A-Class has abandoned its “tall-boy” stance and is now low-slung.

Thankfully, the stylists have endowed the new B with much sharper looks than its predecessor, with slightly lower and wider proportions, a kinked body crease along its flanks to add visual interest, and bejewelled headlamps with LED running lights lining their upper edges.

Inside, there’s an absurd amount of headroom – as you’d expect. The new model is 89mm longer than before, and coupled with the car’s flat, tall sides, this really does liberate a vast amount of interior space. Quite simply, no other mid-size hatchback is as spacious. 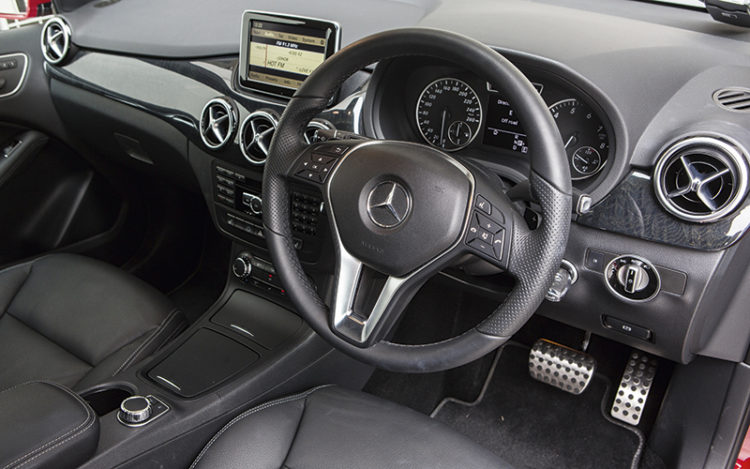 The driving position is quite uncomfortable, but the ergonomics is otherwise okay.

Rear legroom is excellent and the cabin feels as wide as an E-Class, with the rear bench well able to seat three-abreast comfortably. With its multitude of windows, the cabin is very airy, too – even more so with the optional twin sunroofs that our test car has.

The fascia is handsome, with a subtly curved dash-top and standard-issue Mercedes switchgear and instrumentation. There’s an iPad-like screen standing proud of the dashboard, and the chromed, circular air vents are a nice touch (and are also nice to touch).

Storage-wise, there are various deep, sensible cubbyholes sprinkled everywhere, and the rear passengers get a couple of flip-up picnic trays mounted on the front seat-backs. But surprisingly, there aren’t any rear air-con outlets, which is a curious omission. Like the cabin, the boot is big and immensely practical – wide, deep and intrusion-free, with a low loading lip and a large tailgate. 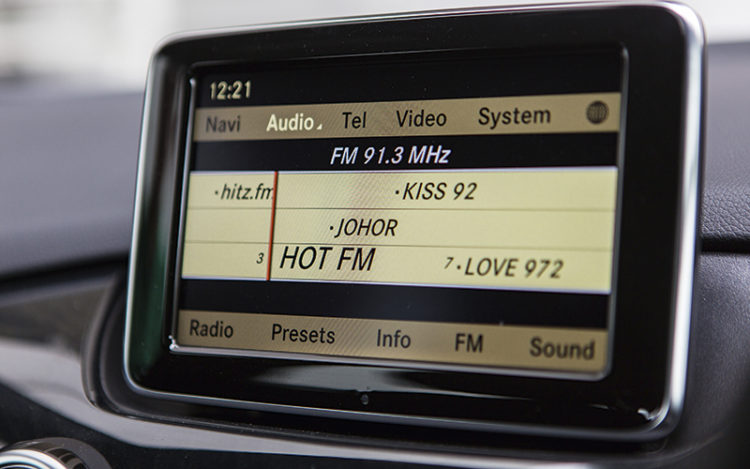 Space is one thing, but comfort is another, and this is where the B-Class stumbles. The driving position, for a start, is awkward. The pedals are set too close to you, but move the seat far enough back to allow your legs some stretching room, and the steering wheel is too far away (even when fully adjusted for reach). So, you end up canting the seat-back into an unnaturally upright position just to reach the wheel, with your knees uncomfortably bent.

And then there’s the ride quality. The chassis never feels settled, seemingly picking up and amplifying even mild surface ripples. Small, sharp imperfections such as expressway expansion strips are smacked into rather than wafted over, and the car generally bobs and pitches and makes such a fuss over bumps that you find yourself consciously steering around, rather than over, them. Perhaps the problem lies with the 20mm lower suspension fitted as standard to the B200 Sport model tested here. 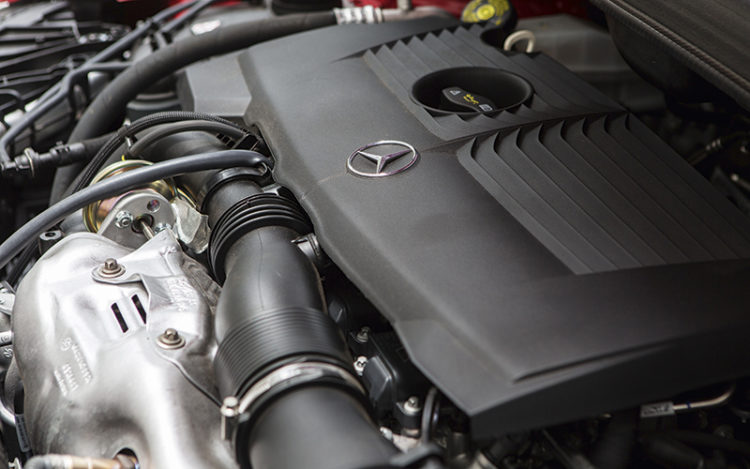 This 1.6-litre turbo, 7-speed drivetrain does an equally good job in both the B-Class and A-Class.

The upshot of this brittle ride is a vehicle that steers more sharply and corners flatter than it looks like it should. The front end responds keenly to the helm, and the all-electric steering is nicely geared and well weighted, although more feel would be welcome. Body roll is largely absent, encouraging you to chuck the B200 at bends with more enthusiasm than you would have expected. It’s still no baby AMG, but it’s not bad at all for a sensible-shoes hatchback.

At a cruise, engine noise is fairly subdued but road noise is noticeable, especially over certain surfaces where it becomes pronounced. It’s unclear whether this can be blamed on the test car’s optional 18-inch rims and low-profile 40-section tyres, but as with the ride quality, this is an issue in a car whose primary purpose is to serve the family. 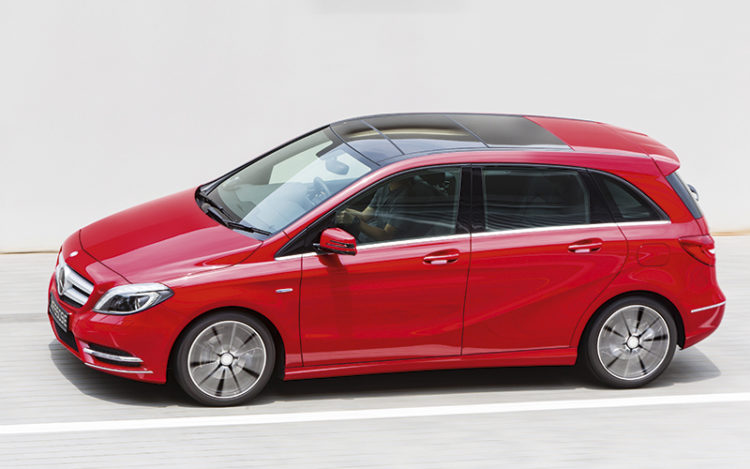 The performance and handling are pretty good for a sensible family hatch.

For now, the only B-Class version on sale here is the B200 which, despite its name, is powered by a new direct-injection turbocharged 1.6-litre 4-pot. It delivers 156bhp and a useful 250Nm of torque, and pulls the car to 100km/h in 8.6 seconds, although on the road it feels quicker than that. The engine is decently smooth-spinning, although not quite as keen-revving as the rival 1.6 turbo unit in the BMW 1 Series.

Power is transmitted via a brand-new 7-speed dual-clutch gearbox, which on this car comes with steering-mounted paddle-shifters. On the move, the transmission shifts seamlessly and its spread of ratios is broad enough to cover all the bases. 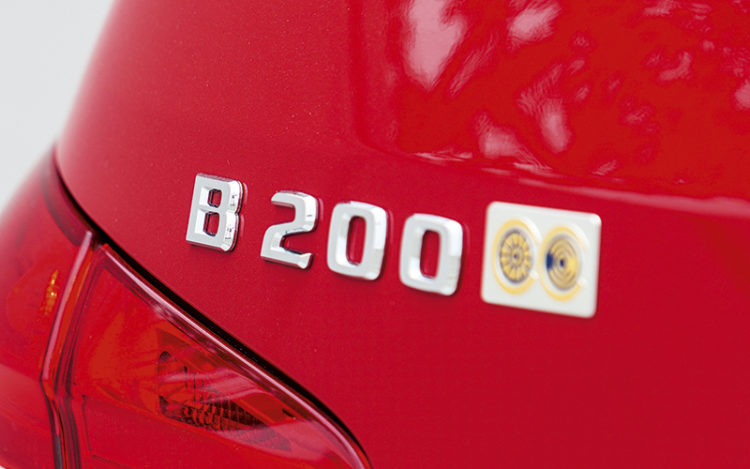 But it’s dim-witted when you just want to move off on a light throttle, taking ages to react when the lights go green unless you give that accelerator a brutal shove. It’s slow reacting to part-throttle kickdown, too. Curiously, these two shortcomings are shared with VW’s 7-speed DSG. Has there been some technology sharing that we don’t know about?

So, Mercedes’ revised “boxcar” excels in one area (space), performs well in a couple of others (handling and performance), but falls short on a few important fronts (ride, noise, driving position). Perhaps the B-Class would fare better with its more comfort-biased “normal” suspension and smaller wheels, but on the evidence we’ve seen, it’s a patchy performance. 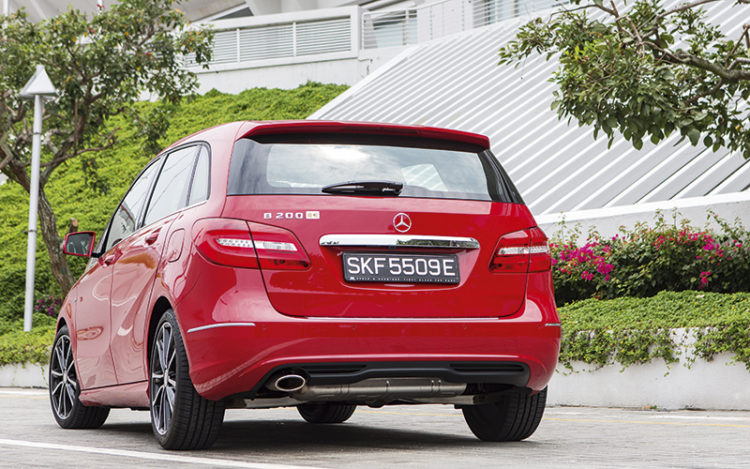