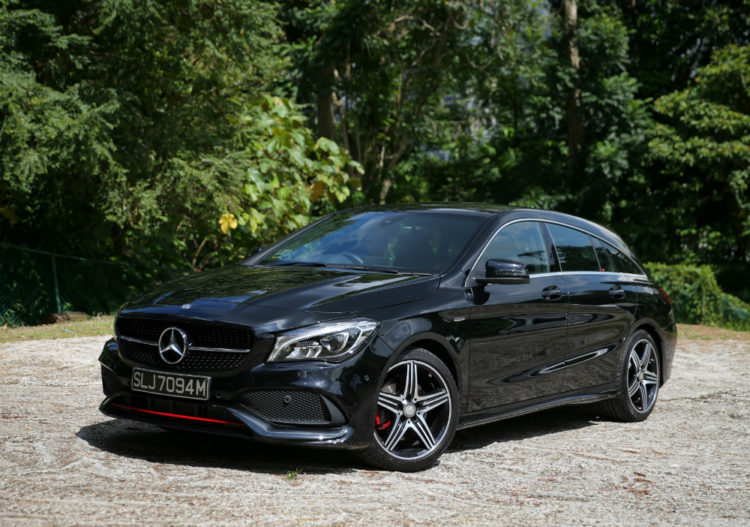 Of all the names car companies have come up with in recent years, Shooting Brake easily qualifies as the silliest.

The term dates back to the early 1900s and described a genre of cars made for hunting parties. Apparently, the carriages had room for dogs and armed men.

Later, it was used for two-door station wagons. Why anyone would want a two-door wagon is beside the point.

Its murky nomenclature aside, the CLA Shooting Brake is actually both sensible and sexy, a feat few carmakers have managed to achieve.

In the CLA250 guise, it is also very spirited. It is endowed with the same GTI-rivalling powertrain first seen here in the Mercedes A250 Sport in 2013 and the CLA250 later that year.

In its latest form, the engine comes across as even more rorty, and the gear ratios sorted for more get up and go.

Hence despite being a bigger vehicle than the CLA250, the CLA250 Shooting Brake matches the smaller car’s century sprint timing and top speed.

It is, however, 11.3 percent thirstier – probably even more if you fill its enormous stowage.

A motorised tailgate makes loading and unloading a cinch, while a sturdy privacy roller blind-cum-parcel shelf is always nifty for a station wagon.

The Shooting Brake is low-slung for a wagon, but that does not reduce its practicality unless you need a high ceiling for the cargo area.

As the roof slopes down towards the boot area, headroom for rear occupants is not seriously compromised.

Rear visibility is surprisingly adequate. Blessed with a torquey powerplant and a light throttle, the CLA250 Shooting Brake feels sportier than you would expect of a wagon.

Which is good. But some drivers would want to dial down its raw and rowdy exhaust note, which is not particularly appealing.

The car is thus best in comfort drive mode. It delivers the responsiveness you can easily get accustomed to, but without the unnecessary noise.

The car’s ride is another minor surprise. It feels noticeably more pliant and cushioned than the CLA’s and far more forgiving than the A250 Sport’s.

Where it falls short compared with its two siblings is in noise. The test-car betrays an intermittent and clearly audible cabin buzz near its instrument binnacle. And there is some wind noise emanating from the second row once the speedometer reaches 80kmh or so.

These traits may be fine for a hunting party, but not for peace- and animal-loving individuals who may better fit Merc’s customer profile.