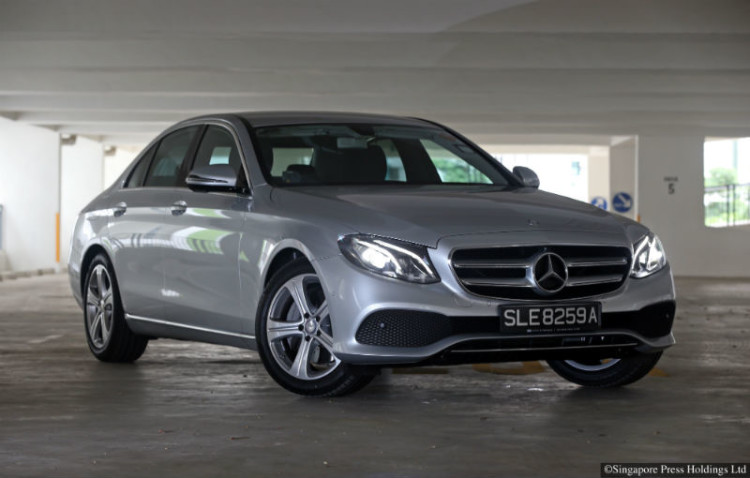 If a car is judged by its looks alone, the new Mercedes-Benz E-Class is clearly a winner by a long mile.

There is no executive sedan out there that comes close to matching this regal and sporty-looking four-door. From any angle, it is a visual feast, with every nuance in its sheet metal reminiscent of the sinewy curves on a Greek statue.

The new E-Class is an Apollo among its peers, measuring almost 5m tip to tip. Its sheer size does not diminish its dynamic appearance. Rather, it seems to enhance it.

The sensory treat continues inside. Flowing lines of the cabin are highlighted by an LED glow, bright enough to make a point but not so much as to appear garish.

The Start button resembles a rotary shaver head, encased in enamel and lit like a photon thruster on a starship.

You will find a new instrument display – in the same vein as Audi’s virtual cockpit, but much more modern and stylish. It is exactly like what you have been seeing in wild concept cars. Except that it works.

The infotainment screen is huge and glorious, with a navigation display unlike any other. It tells you where nearby amenities are and, when applicable, automatically goes into street-view mode, complete with 3D renditions of buildings and street furniture.

The infotainment screen and instrument panel are right next to each other and both share a common sun shield. Hence the driver has access to an integrated suite of information. Driving in the city at night, you get a taste of what Bruce Wayne sees in his Batmobile.

Most of the features here are within thumb-reach, via mini touchpads on either end of the horizontal steering spokes – an industry first.

The Mercedes helm is still the most feature-packed yet uncluttered one in town. It is marred only by sharp edges on the underside of its six o’clock spoke’s metallic casing (not an uncommon flaw).

On the go, the new E-Class is on more familiar grounds, but still has enough improvements to entice.

Its extended wheelbase of 2939mm (65mm more than before) translates to more legroom for rear occupants. 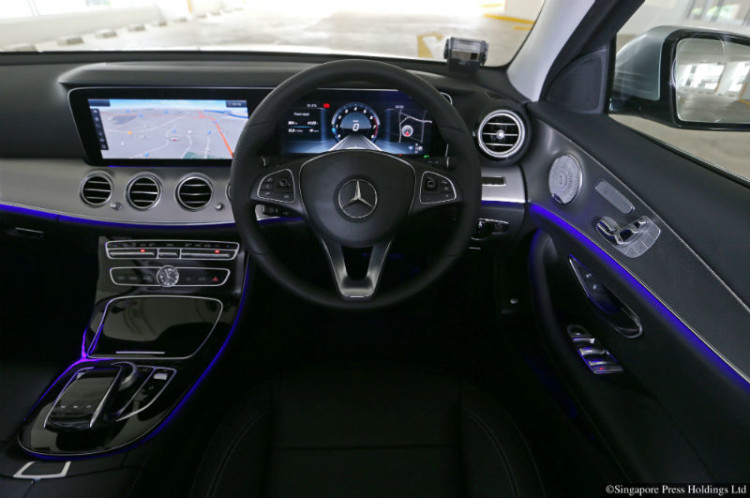 It also translates to a limo-like ride – softer than others in its class, with a slight waterbed tendencies. Surprisingly, it holds up well to cornering and braking forces, allowing the driver to take liberties without upsetting passengers (or car).

In fact, the E-class handles more naturally than the more compact and supposedly more dynamic C-Class. Its chassis responds linearly to steering inputs, even if there are moments you forget the car’s extraordinary wheelbase and length.

Despite its size, the car is just a shade over 1.6 tonnes. With 184bhp and 300Nm of torque available from 1200rpm, there is adequate shove for the elegant mass.

But the four-cylinder engine makes a rather inelegant sound when extended – a stark contrast to similar engines found in BMWs.

The test-car’s transmission is prone to violent shift shocks when moving from third to second gear, marring an otherwise brisk but uneventful outing each time.

The test-car is fitted with a slew of active safety features, including side impact warnings. A few other features are optional too, such as the cool “concept car” cockpit (which costs $4100).

You can opt for a semi-autonomous pack for $11,500 too. With this, the car can self-drive in many situations, at speeds of up to 130km/h.

Sure, it is completely unnecessary. But it will make an already cool car so much cooler.