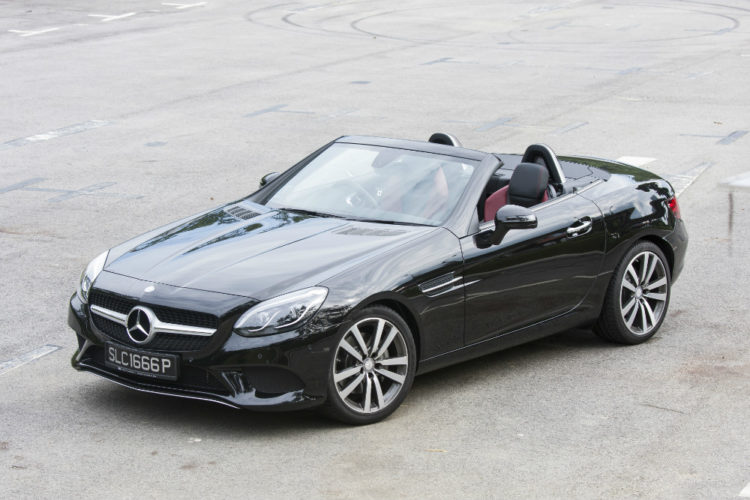 As the world’s first roadster with a foldable hard-top 20 years ago, the first-generation Mercedes-Benz SLK created quite a stir.

Many followers later, the novelty of a retractable metal canopy wears thin and the SLK has sort of slinked away from the limelight.

Truth be told, roadsters on the whole have lost some of their shine. So what is a 20-year-old dame to do in a world head over heels in love with crossovers?

A name change, for a start. The third-generation SLK has been given a major mid-life makeover, along with a new title – SLC. The C refers to the car’s links with the C-Class, with which it shares several technologies and parts.

More importantly, the new name gives the model a fresh start and, hopefully, puts to rest its questionable reputation as a hairdresser’s car.

First off, the cosmetic changes are effective, although black is definitely not the best colour to show off those changes.

No, darling, you need a pearly white or lovely metallic paintwork to bring out the subtle creases of the car’s sheet metal.

The car’s previous avian-like bonnet and grille ensemble gives way to a sportier and more modern arrangement that is reminiscent of the Mercedes SL. (The test-car is not fitted with a “diamond” grille. )

Vents strategically located on the fenders as well as on the bonnet hint at the SL too.

Even at a glance, it is clear the car is more sinewy. The cute soft baby fat curves have given way to a ripped profile that ends dramatically in the rear.

The changes are extensive and could have qualified the SLC as an all-new model. Tweaks to its powertrain are less so. 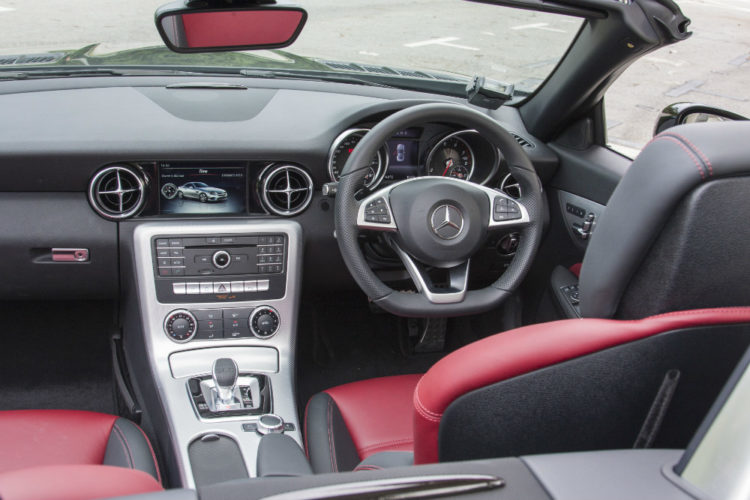 The SLC200 gets a turbocharged 2-litre 4-cylinder that puts out as much power as the previous 1.8-litre engine.

But its torque has risen considerably, peaking at a healthy 300Nm from 1200rpm. This makes the convertible two-seater zestier in the city, while not straying from its previous fuel economy.

On long open roads, efficiency is also aided by the car’s 9-speed autobox (seven previously). Elsewhere, eighth gear is as far as it will go.

The SLC200 clocks a 6.9-second century sprint, 0.1 seconds quicker than its predecessor, while top speed is unchanged at 237km/h.

At the wheel, the most obvious change is how more vocal the car sounds now. With the top down, and driven with conviction, the SLC200 makes its presence felt.

While it has sufficient go, it falls short on oomph when you feel like picking up the pace.

The car has a relatively cushy ride quality. But if there is any change to its handling, it is not apparent. Its steering and road-holding are beyond reproach, even the car betrays more body roll than expected.

You will find smoothness that is characteristic of most Mercedes-Benz cars. For instance, the car brakes with great efficiency, but with the slightest hint of dive.

On the whole, you may find something like the Audi TT Roadster a more involving drive.

The SLC200 is equipped with features such as cruise control, motorised steering adjustment, electronic parking brakes with hold function, and a nifty AMG-style transmission lever that is a joy to use.

But strangely, its air-conditioner does not have an automatic control. A small (but strange) omission which most folks would not mind. Probably not even hairdressers.