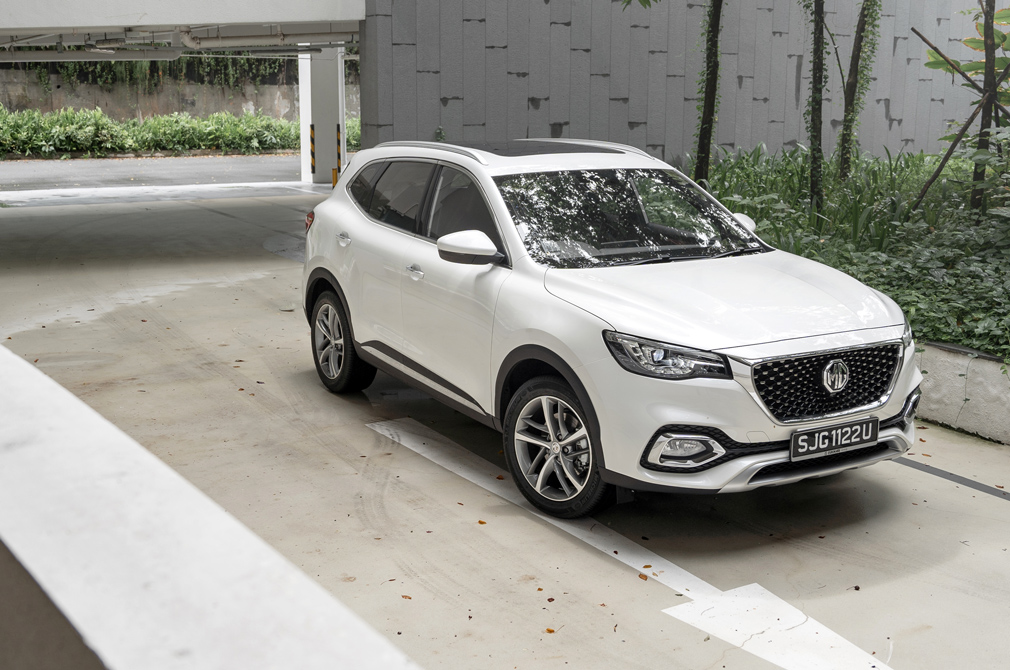 If you are still of the opinion that the Chinese cannot build quality cars, you probably belong to one of two camps.

You’ve either owned a Chinese car before, or have heard too many horror stories from friends who did.

I don’t blame you. Over 10 years ago, the Chinese cars that arrived on our shores were cheap but not cheerful. They were very affordable, but sorely lacked design, quality and performance.

But if you think about it, that’s exactly what we said about Korean cars when they first entered the market in the 1980s. Look how far they’ve come.

Like you, I also believed that it would take longer for the Chinese to catch up. But after clocking 150km with the MG HS over two days, I’ve changed my mind. 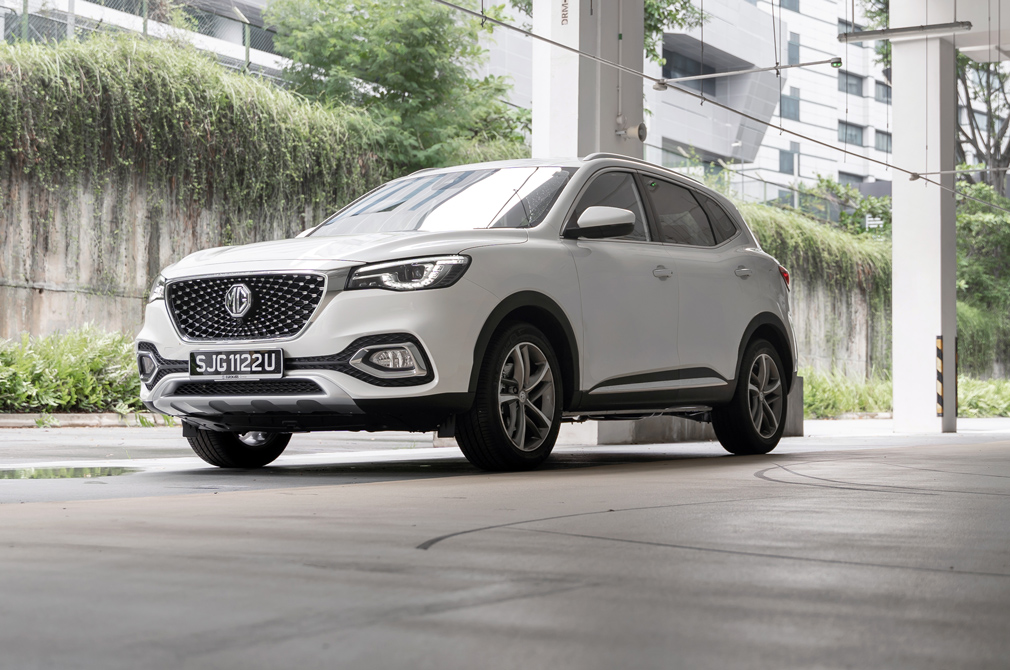 I didn’t pay much attention to the MG HS’ design when I first saw it. It looks like it was “inspired” by the Mazda CX-5 and from certain angles, the Nissan Qashqai.

But looking at it again (this time with an open mind), it’s not bad.

LED headlights are standard. The large studded grille adds to its road presence, there are no complicated lines and/or curves, and the rear end is coherent.

Speaking of road presence, the MG HS looks larger than expected, despite being only 4574mm long. The engineers have made the most of this by stretching the wheels to give the HS a 2720mm wheelbase. This bodes well for interior space. 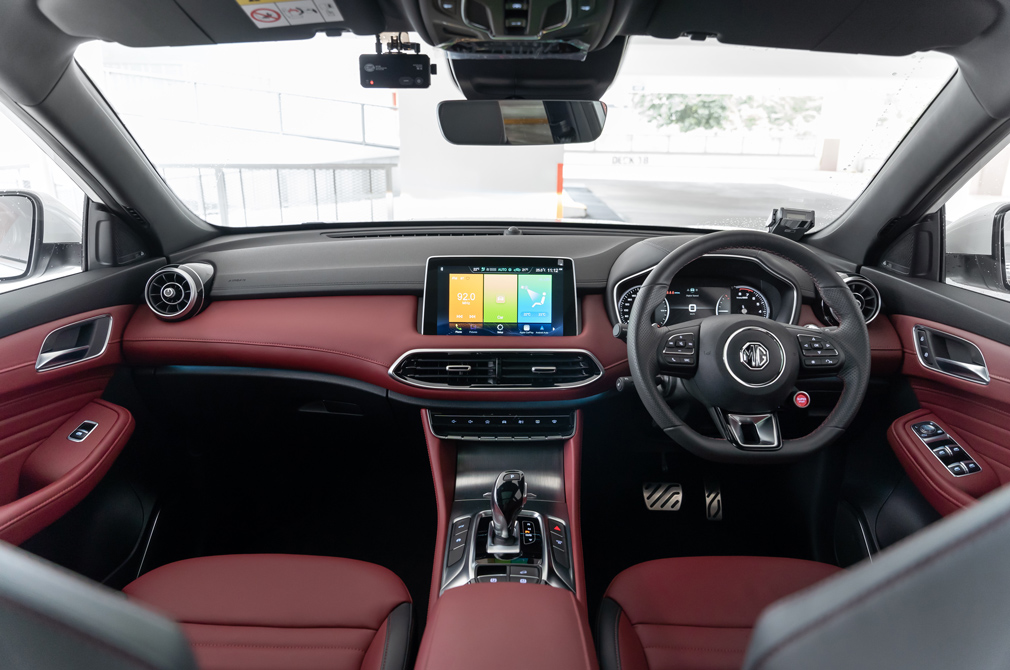 The first touch point between a driver and a car is the door handle. So, the first mechanical impression is formed when the door is opened and closed.

The MG HS nails this. Its doors open and close with a solid feel and soft “thunk”. There are no hollow sounds or clanging noises.

I was pleased with the nicely designed and well-built interior. There are sport seats, a flat-bottom steering wheel and alloy pedals. Mood lighting is also standard – along with dozens of colours to choose from.

The centre console is trimmed in what looks like brushed metal. There’s even an electronic gearshift lever or “joystick” instead of a conventional one. 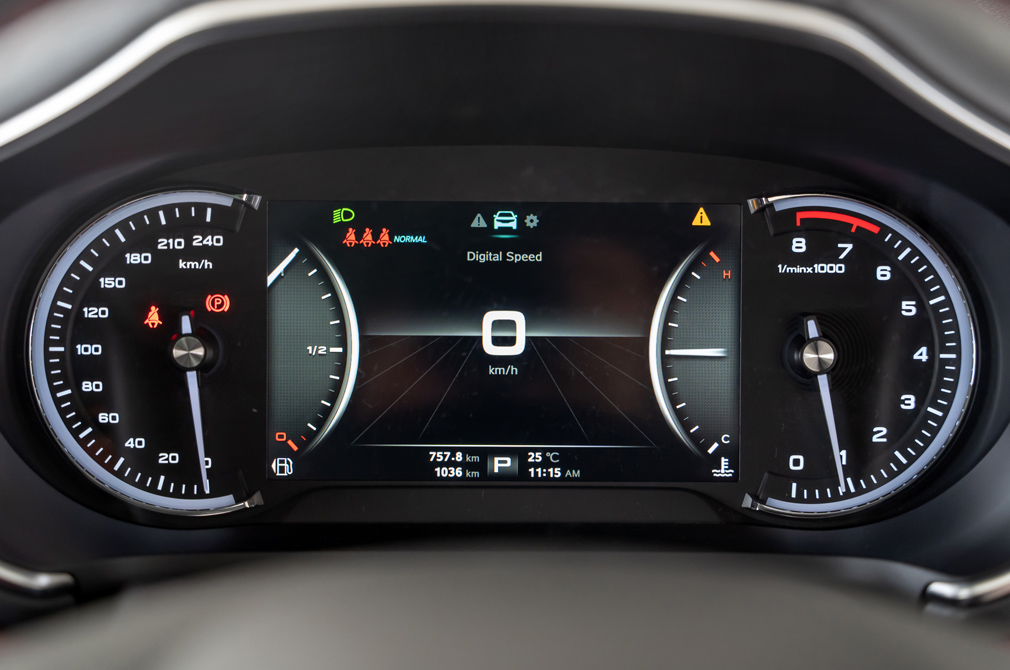 Too bad neither one has a memory function, which is something electrically adjustable seats should have. After all, what’s the point of being able to fine-tune a position when you can’t save it?

A 10.1-inch infotainment display with pretty graphics sits atop the dashboard. The instrument panel is a part-analogue, part-digital affair. Again, the graphics are sharp and the information is presented in an intuitive manner.

However, I did wonder why the fuel and engine temperature gauges are oversized. Perhaps the MG HS’ designers needed to fill up the space.

MG HS designers have done a decent job packaging the backseat. Wheelbase length is one thing, but inefficient packaging can make the lengthiest wheelbase seem pointless.

The backseat is spacious, with plenty of legroom and foot space to spare. But the panoramic sunroof does reduce headroom. I have no issue with this (I’m 1.73m tall), but if you’re over 1.8m tall, you’ll probably say otherwise.

That said, the floor protrusion in the MG HS is relatively low, so three regular-size adults can easily fit here. 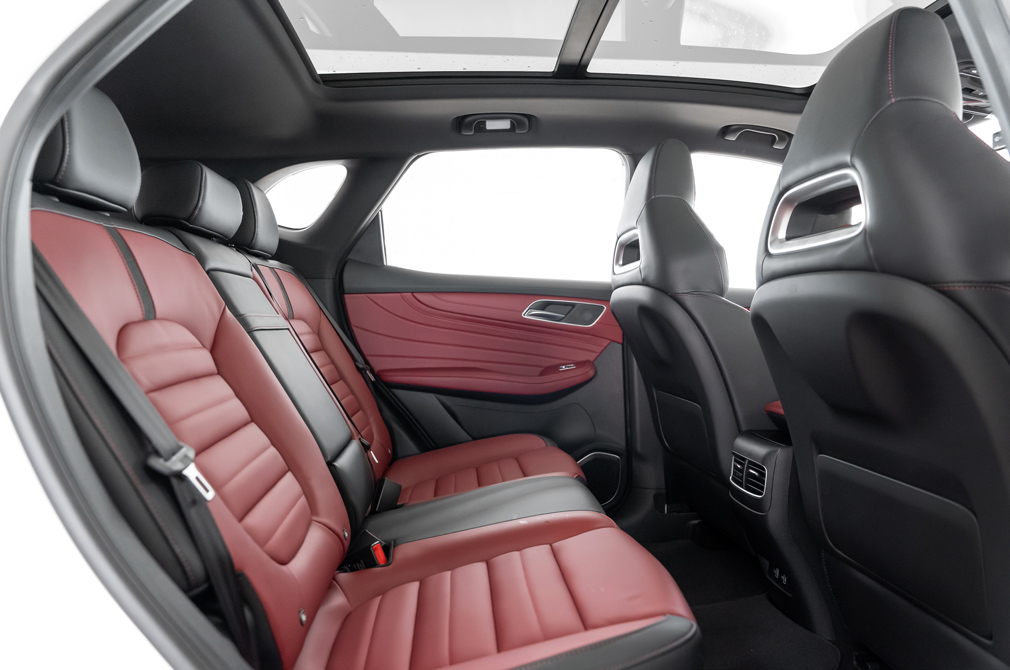 Making this space cool and useful are a pair of air-con vents and USB ports.

Too bad you can’t adjust the airflow volume in the former, while the latter is placed a bit low. Passengers will need cables that are at least 2m long in order to use their phone while charging it.

The MG HS is not marketed as “sporty” despite the racy components in its cabin. And that’s a good thing, too, because if it was, it would elicit complaints.

Powering the MG HS is a turbocharged 1.5-litre inline-4 capable of 160hp and 250Nm – the latter from just 1700rpm. This motor is paired to a 7-speed dual-clutch gearbox.

Now, if you’re used to dual-clutch gearboxes from the Volkswagen Group, you’ll expect all dual-clutches to be snappy. But the MG HS’ gearbox is a relaxed performer. And you can’t hasten the shifts by using the paddle shifters either. 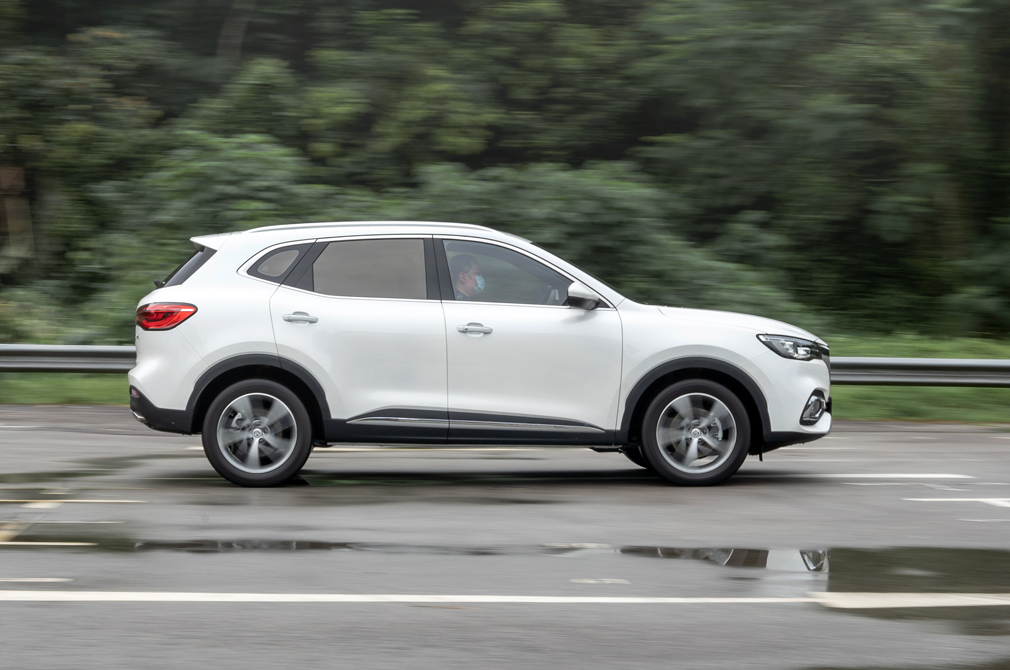 Instead of speedy shifts, the MG HS favours smooth ones. A software upgrade will improve the drivetrain’s responses.

Before I could complain further, a colleague reminded me that most SUV buyers aren’t after a high-performance machine. “And these buyers won’t be driving the MG HS like you would,” he added.

Indeed, when driven normally, or at five-tenths pace, there’s nothing wrong with the HS. MG claims a century sprint time of 9.9 seconds and it’s possible if the Super Sport setting is activated.

Super Sport is the most responsive of the five modes – the other four being Eco, Normal, Sport and Custom.

I toggled between Normal and Sport, and only utilised Super Sport when needing to merge quickly with expressway traffic.

That said, MG engineers must have taken Super Sport seriously. If you utilise the paddle shifters – thereby activating the manual override – in this mode, the transmission remains in “manual”.

You cannot swop modes by tapping down on the gearshift lever. You must either press the Super Sport button or Mode button to revert back to automatic. 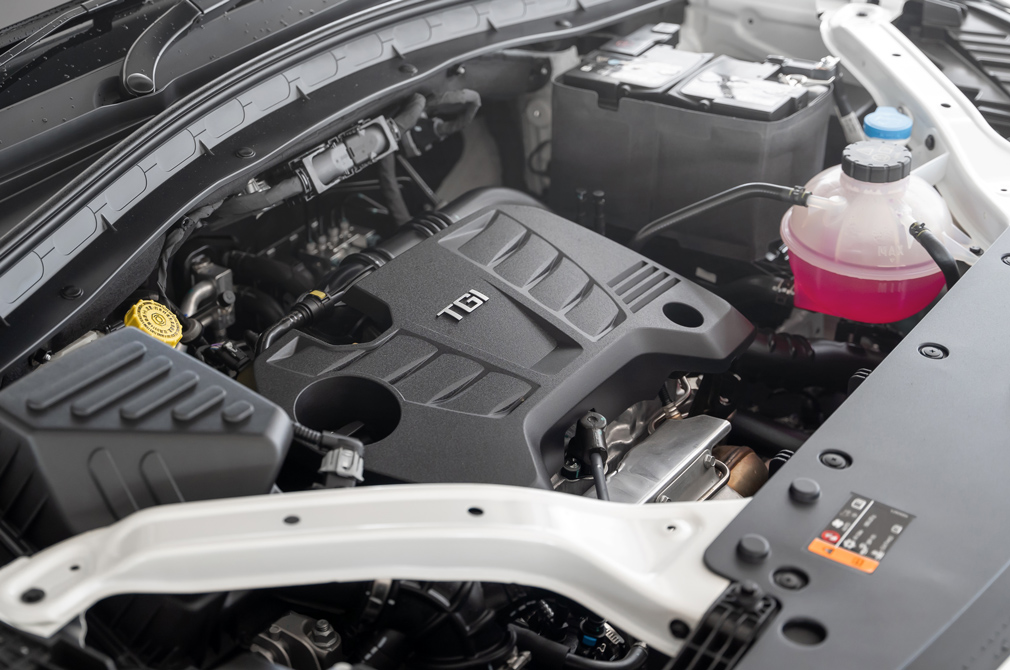 I had no issues with the MG HS’ ride quality, except on undulating surfaces. On expressways, road noise is acceptable and there was little to no wind noise at 90km/h.

As mentioned earlier, I’m glad the MG HS is not marketed as a sporty SUV. It’s just not a vehicle to push hard in corners – unless you enjoy making your passengers feel ill.

Dads and mums concerned about safety will be pleasantly surprised to learn that the HS has a five-star Euro NCAP rating. That’s reassuring, especially if you’ve been sceptical about MG’s offering. WHO IS THE MG HS FOR?

If you’re looking for a mid-size SUV that offers incredible value for money, this is one to definitely check out.

It is well-equipped, well-built and spacious. And it doesn’t look half-bad either. The only bugbear is the drivetrain’s responsiveness, which can still be improved.

But because the MG HS has ticked so many boxes and starts from just $99,888, it is hard to complain.

A car like this shows that the Chinese can catch up. And if other manufacturers do not take them seriously, they are likely to be overtaken.