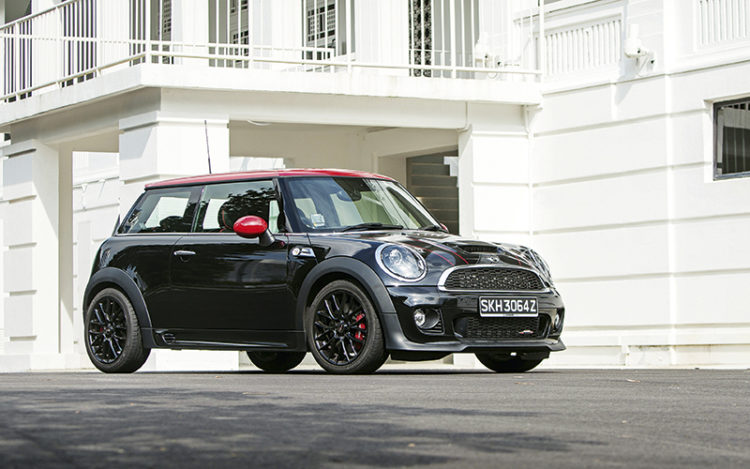 Add that eminently noticeable burble emerging from its massive twin chrome-tipped exhaust pipes, and the JCW is quite probably the last thing you’d want to consider as a getaway car after you’ve pulled off that heist at Marina Bay Sands. 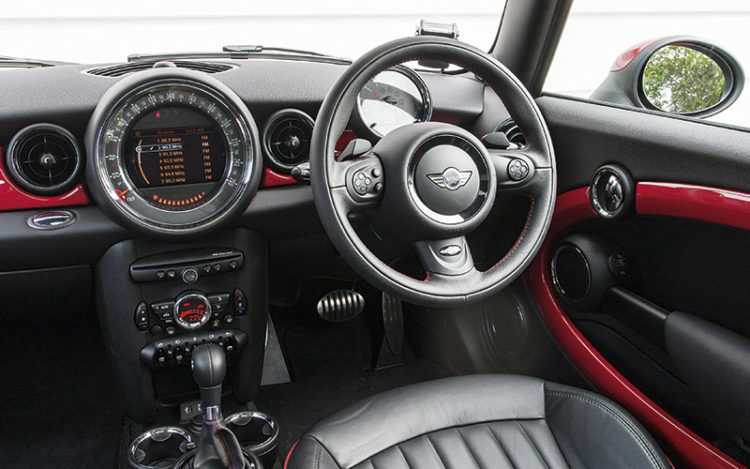 This is the first MINI JCW equipped with an automatic gearbox, which widens its market appeal.

And since the next one down in the MINI performance hierarchy, the Cooper S, already drives like a puppy on amphetamines, it would be safe for one to assume that the British marque’s “hardest” model would be borderline undriveable everywhere but on a racetrack.

What we were expecting was a hair-trigger throttle, heavy steering and a hyperactive chassis – essentially the “go-kart handling” experience MINI is fond of trumpeting, but turned up to 11. 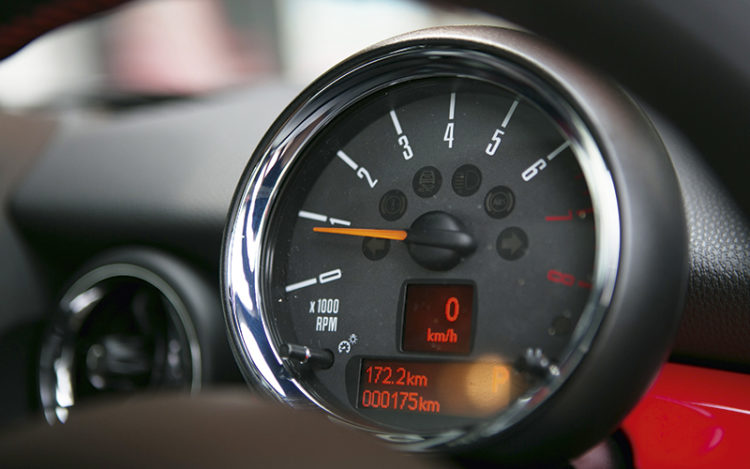 On paper too, the JCW seems to reinforce the notion that it’s more at home on roads without laws or speed limits. There’s added oomph from the “worked” 1.6-litre turbocharged engine, featuring – among other fettling – a lightened crankshaft and reinforced pistons to produce 211bhp (from 186bhp in the Cooper S). The century dash is achieved in 6.7 seconds, or 0.5 of a second quicker than the Cooper S.

But what really takes one by surprise is how docile the JCW feels when you’re not giving it the proverbial beans. Yes, it is difficult not to notice the engine firing to life as the starter button is pressed, just as you’d be hard-pressed to ignore the liberal lashings of contrasting red trim in the cabin. 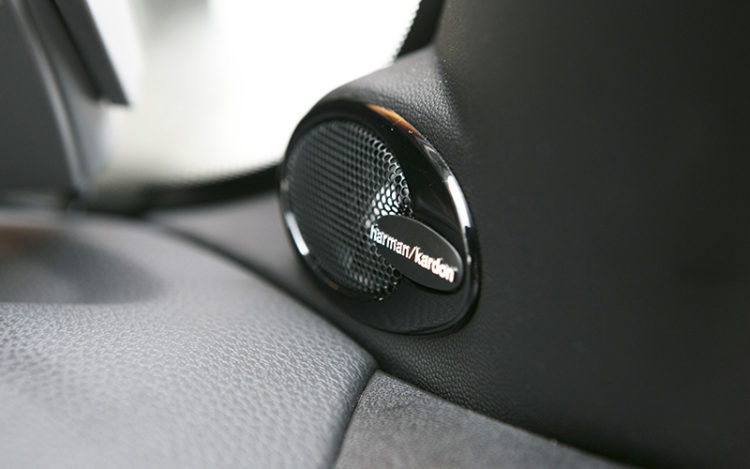 Harman/Kardon sound system allows one to – as they say – “drop the bass”.

Yes, it’s also difficult not to notice what happens when the throttle is pinned to the floor as a maximum of 280Nm of torque (260Nm without the brief “overboost” function) from 2000rpm is unleashed on the front wheels.

But while the Cooper S on which it’s based never really feels happy unless it’s being flayed to within an inch of its life (and your licence), and despite the power on tap, the JCW is quite content being driven gently at middling speeds. 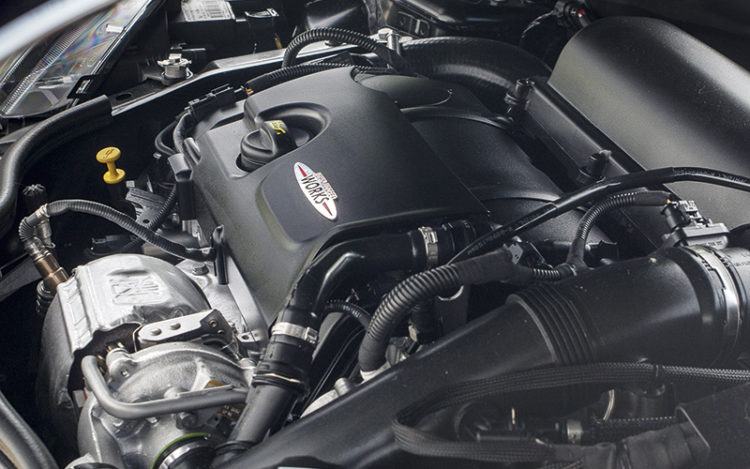 Key to this is the uprated suspension. It’s certainly as firm, or even firmer than the one used on the Cooper S, but it’s better able to deal with smaller, high-frequency bumps, and mid-corner imperfections do less to throw it off.

Taking it through the Singapore’s worst tarmac will still threaten to loosen a couple of vertebra, but on the whole, the JCW’s ride is quite possibly the best we’ve experienced in a MINI to date. 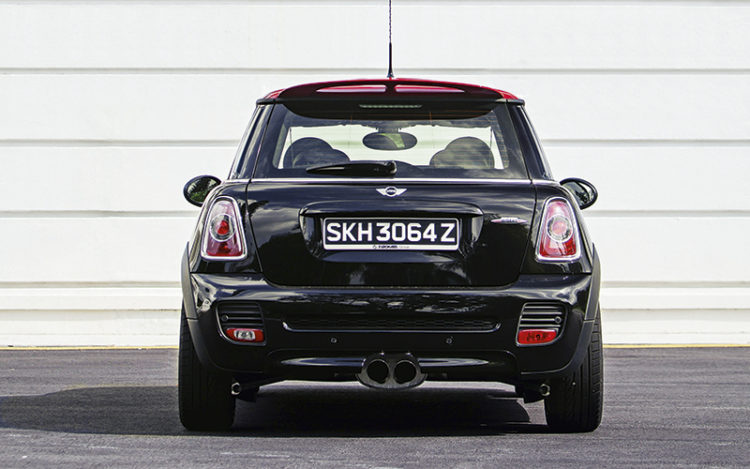 Clues to the MINI JCW’s performance are apparent even from the rear.

As for the way it tackles the twistier sections of road, the amount of grip it can muster up beggars belief, taking into consideration the amount of torque being delivered to the front wheels and the absence of any limited-slip differential, mechanical or otherwise.

The JCW isn’t wanting for depth or breadth of its abilities (which it has in plentiful reserve), although what could keep punters reaching for their chequebooks is how much the JCW costs. Without options, the JCW will set you back $216,800 with COE. Then there’s the almost-over-the-top styling and boisterous personality, which certainly won’t appeal to everyone. 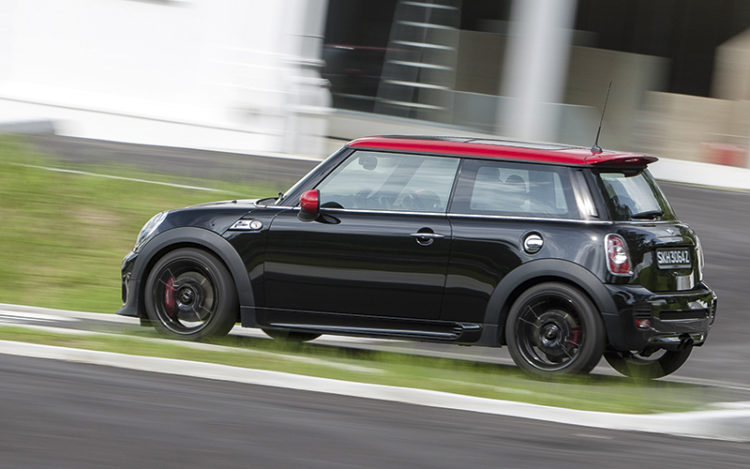 But for the convinced and those who have the requisite amount of zeroes in their bank balance, however, the JCW is easily the pick of the MINI litter.