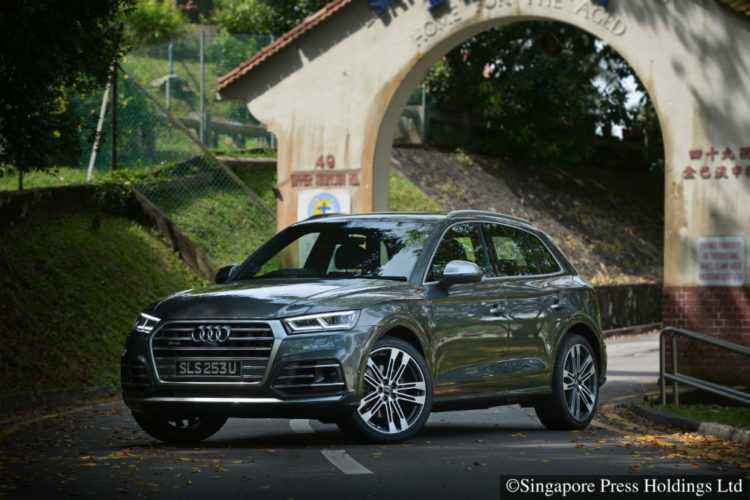 Have you had fried ice cream? It is a really cool concept – a big round scoop of your favourite flavour coated in light batter and dunked quickly in boiling oil.

The result is a golden orb of contradictions that confuses and delights at the same time.

The Audi SQ5 is something like that. As most people would know well by now, a sports utility vehicle is a misnomer. There is nothing sporty about an SUV. At least, not in the traditional interpretation of the word “sporty”.

An SUV is all about comfort and versatility. But carmakers like to mix it all up these days – in a bid to let buyers have their cake and eat it too. Sometimes, it works. But the attempts are never without trade-offs.

In the case of the SQ5, the trade-off would be its tallish body sitting on a stiffly sprung chassis. On the road, this translates to your head bouncing off the headrest 45 times a minute.

So you try to sit without touching the headrest. Otherwise, you risk one, a migraine attack, or two, appearing like a closet headbanger to other drivers.

In the Audi S5, which has the same steroidal powertrain as the SQ5, this situation does not present itself. Simply because it sits closer to the ground and its body movements are less exaggerated.

To compensate for its propensity for a more jiggly ride, Audi should have installed headrests with thicker and softer paddings.

The beauty of the SQ5, though, is that it comes across as a very entertaining car to drive despite this characteristic.

Obviously, it has plenty of grunt from its turbocharged 3-litre V6, bristling with 500Nm of torque from just 1370rpm. Beefier than the supercharged 3-litre V6 used in its predecessor, it allows the current bigger and lighter car to be just as swift and yet more efficient.

And like all Audi S-variants, it makes known its prowess early. Right from ignition, it comes to life with a roar that is full of promise.

It is eager to fulfil that promise, too, going briskly into a gallop with little notice, almost dispensing with that gradual ascent which governs mere mortals in the Q5 stable.

While it is exceedingly quick for a Q car – with a century sprint of 5.4 seconds – it pales in comparison to the S5 Sportback, which not only does the same sprint in 4.7 seconds, but also feels like a significantly faster car all round.

And even though it has quad tailpipes like the S5, the SQ5’s exhaust note stays further in the background. This diminishes its sense of occasion somewhat.

It readily bursts into song when you drive it hard, though. It does not take a lot of effort, either. Just tug the gear lever lightly and the car goes into beast mode.

To its credit, the car’s hardened chassis holds up well against sporty driving, and the stiffness and rigidity that give rise to sycophantic head movements are forgotten.

In this respect, the SQ5 is as exhilarating as the Macan S, which may explain their almost identical pricing. You could say the compact Porsche SUV is also fried ice cream – just another flavour.