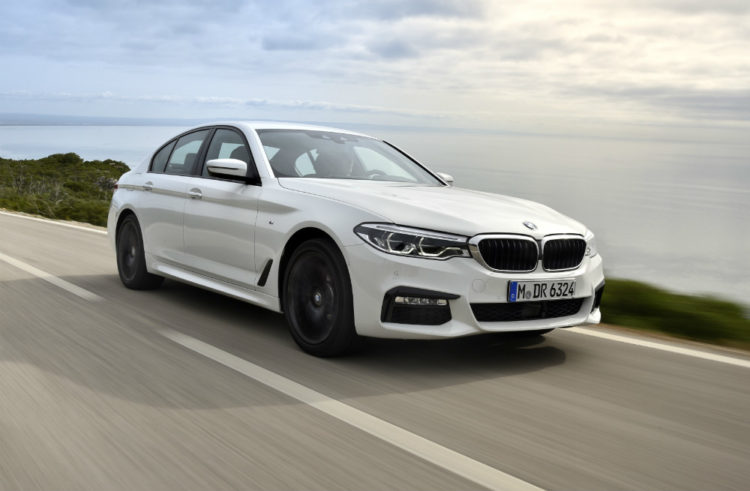 BMW may well have unearthed a new target audience for the brand – the geek market. Its latest 5-Series, the seventh generation of the marque’s longest-running model line, is so packed with electronic technology that you wonder if it needs its own substation to power it.

It has the now-familiar driver aids such as lane departure warning, lane-keeping assist, collision warnings and active cruise control. Essentially, it can drive you down the motorway on its own.

To these, it adds lane change assist, where the car changes lanes for you when instructed to (hold the indicator down for 2 seconds in the desired direction).

Working together, these systems let the new 5-Series steer, brake and regulate its own speed in all traffic conditions from standstill up to 210km/h. For legal reasons, BMW refuses to tout this as autonomous driving (yet) and, as a precaution, the car still requires the driver to keep his hands on the wheel.

The fuel-saving automated stop-start function is now more discerning, drawing inputs from the navigation system, cameras and radar so it knows not to shut the engine down at inconvenient moments, such as when you are momentarily stopped at a roundabout or junction waiting to merge into traffic.

The 540i also offers the Remote Parking feature first seen on the 7-Series, which allows you to manoeuvre the car remotely into a tight lot while you are outside. 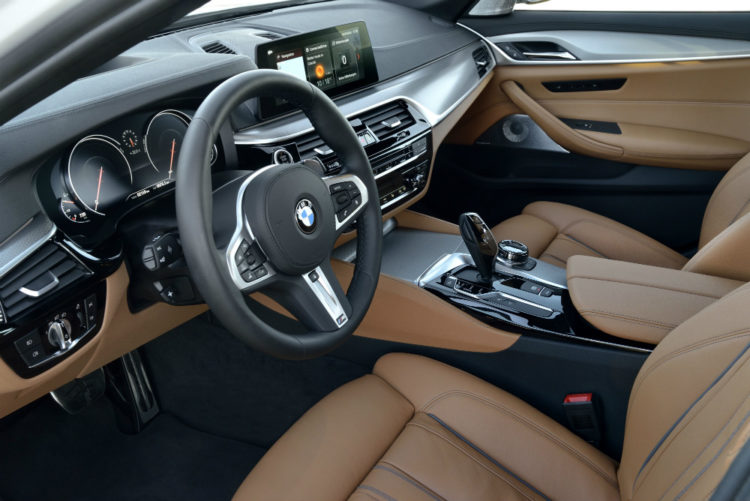 Another trick borrowed from the 7-Series is gesture control, where you change the volume or radio channel, answer or reject calls and operate the navigation by a twirl or wave of the hand, or a pinch or jab of the fingers.

Smartphone integration is improved, too, with Apple CarPlay (fully wireless for the first time in a car) and inductive phone charging.

Headlamps are now LEDs as standard, with adaptive LED headlights optionally available – these can vary the light distribution according to circumstances and needs, including angling the throw when cornering or to avoid dazzling oncoming cars.

All that technology is contained within a body which, while handsome, is evolutionary rather than groundbreaking. The styling draws strongly from the looks of its 3- and 7-Series brethren, as well as those of the outgoing 5-Series.

A slight pity because the derivative looks do understate the magnitude of the advance over its predecessor.

The shape does cleave the air very cleanly though, with a class-best 0.22 drag coefficient. Active louvres in the front kidney grille and lower air intakes, which remain closed for aerodynamic efficiency unless cooling air is required, help achieve this. 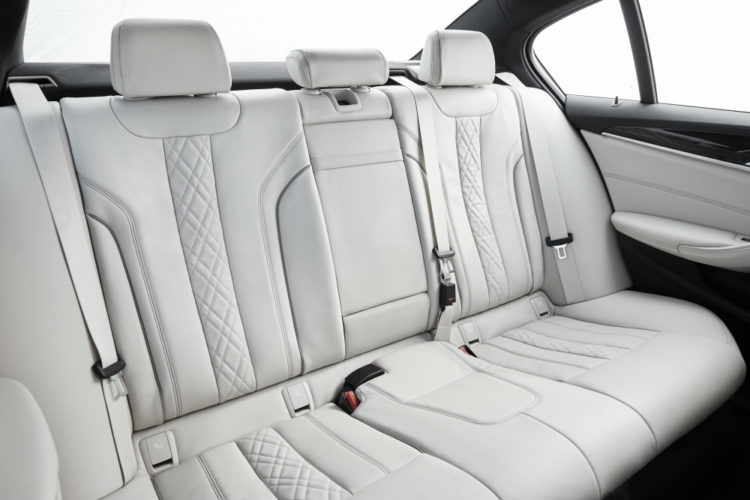 The 540i does not boast the advanced (and expensive) part-carbon body structure of the 7-series flagship, but despite having grown a few millimetres in every direction, model for model, it still weighs up to 100kg less than before, thanks to more use of aluminium, high-strength steel and magnesium.

Handling, performance and efficiency benefit as a result.

The biggest effect of the marginally larger body is felt in the back, where the wider, flatter rear seat fits three abreast comfortably, where it was previously shaped for two. There is a tad more rear legroom and headroom and, overall, the cabin feels airier, with a lower dashboard.

The driving position is great – in a slightly retro touch reminiscent of BMWs of the 1980s and 1990s, the centre console is angled towards the driver so that the controls fall easily to hand.

It says something for the magic of modern-day saloon car performance levels that even the base petrol model, the turbocharged 2-litre 4-cylinder 530i, boasts 252bhp and hits 100km/h in 6.2 seconds. 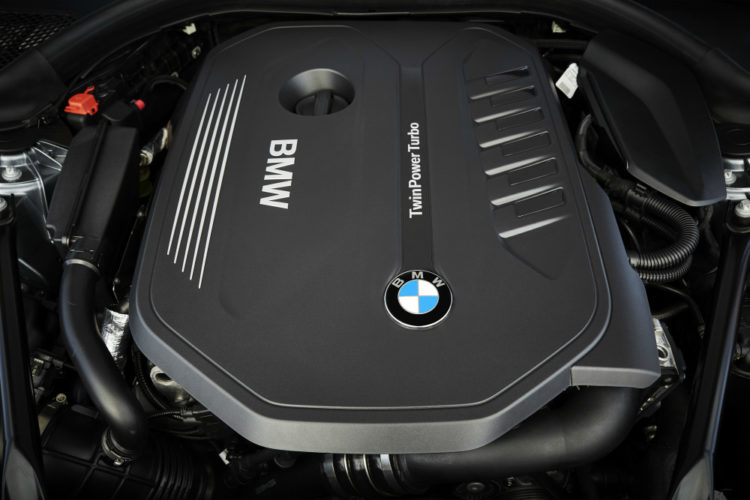 The standard gearbox on both variants is the familiar, excellent 8-speed ZF automatic already found across BMW’s entire model range.

I sampled the 540i – effortlessly quick, its engine spinning easily to its 7000rpm redline, responding keenly to throttle inputs and delivering generous wads of torque at all rev levels.

The 5-Series has always been the luxury saloon that thinks it is a sports car, so agile handling is a given. But what really impresses is how much better the 540i is on this front than its predecessor, which was already the class benchmark.

The new car optionally offers rear-wheel steering, a first for its class, and the test car comes with it.

It is hard to tell how much of the improved nimbleness is down to the rear-wheel-steer and how much to other chassis developments, but the big saloon tackles the endless sweeps and switchbacks of our hilly route with astonishing ease and composure.

BMW has always provided excellent steering and, predictably, the quick-geared helm of the 540i is linear, well-weighted and directs a sharp, keen front end. 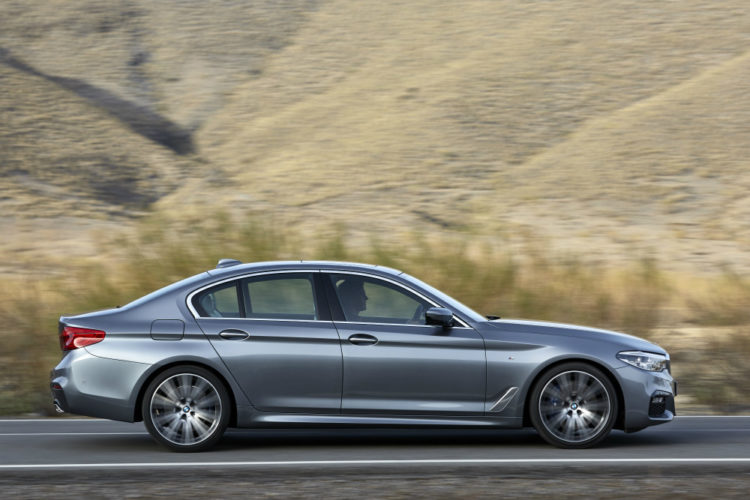 Roadholding is great and body roll is very well-resisted. Much credit for this goes to the active anti-roll bars (now electrically rather than hydraulically activated), which come into play only when cornering forces are detected, and otherwise remain passive so they do not interfere with the suspension’s bump-absorption functions.

A slightly wider track front and rear, and an unsprung weight reduction of more than 9kg, thanks to weight-paring in the brakes, wheels and tyres, all help improve handling as well as ride.

The ride is excellent – cushioned and composed over all manner of undulations and surface flaws, if not quite as incredibly supple as that of the air-sprung versions of its Mercedes-Benz E-Class rival.

All this while the cabin remains an insulated cocoon, with wind, road and engine noise kept well at bay. In particular, the soundproofing integrated into the headlining material has helped, by trimming the decibel count at the critical area around the occupants’ head level.

By diving headlong into the technological arms race with the 540i, there was a real risk that the car would have been a mere exercise in gadget overkill. So it is great to see that BMW has stayed true to its core brand values.

It may be a geek’s delight, but the new 5-Series is still the ultimate driving machine in its class.