There’s no doubt about it. The new Volvo XC60 is the best premium compact crossover there is. It beats popular picks like the Range Rover Evoque and Porsche Macan. Hands down.

Visually, the car is sporty and rugged at the same time. Compared with its predecessor, it has sharper edges, an outline that is more wedge-shaped and broader shoulders – all adding up to give it a more purposeful and planted stance.

Styling elements found in the award-winning Volvo S90 and high-tech XC90 are evident, such as in the rear and cockpit.

Yet, the XC60 is very much its own car. Its windscreen appears more swept back than the XC90’s and its third-row window kinks upwards to form a boomerang-shaped section with the D-pillar. Subtle, yet effective tweaks to give the car a distinctive flavour.

Inside, the mid-range Volvo displays a level of quality and attention to detail usually reserved for luxury models. But, of course, at just over a quarter million dollars, it sits squarely in the luxury league. Yet, there are cars in the same bracket which are not as well finished.

The passenger compartment is no less exquisite and even the boot section looks dishy. The test unit comes with air suspension and along with it, a function that allows for height adjustment to ease loading and unloading.

Air suspension is part of the XC60’s active chassis package, which is a $9000 option – less costly than expected for such an elaborate feature.

It is a thoroughly worthwhile investment. For one, it confers the XC60 with ride and handling traits no other crossover can match. The car goes over humps like they were made of rubber foam. Rebounds are minimal and well controlled.

Along with the sharpest steering found in an SUV, the car traces its way around arcs like a compass. There is absolutely no hint of roll as you enter and exit a corner. For a car with a 2865mm wheelbase – unusually long for its 4688mm length – the Swede is as neat as a low-slung hot hatch in its turn-ins. 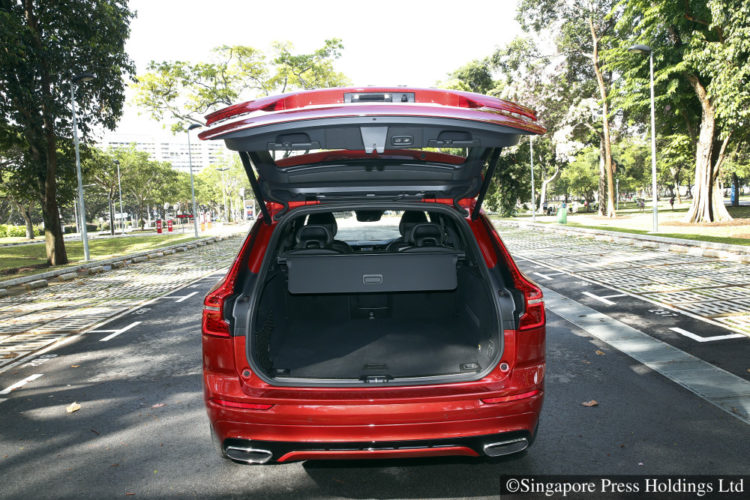 Even if you are a sloppy driver, you are unlikely to stray to the next lane when making an almost right- angle turn.

The all-wheel-drive’s uncommon poise is accompanied by a lovely delivery of power and torque. Equipped with a twin-charged engine made famous by the S90, the XC60 is never, ever short of breath.

Its throttle is so “squeezable” you would find yourself easing off for no other reason than to squeeze it again. Power delivery is so linear, it might even pass off as an electric car if not for a throaty exhaust roar from 4500rpm.

Usually, you do not go anywhere near that rpm. The XC60 goes from trot to gallop with hardly any persuasion, even if its speedometer seems a tad optimistic.

There is a price for its gutsiness though – a fuel economy of nearly 5km per litre.

Like all modern-day Volvos, the XC60 is equipped with more active safety features than any reasonably careful driver would care to have.

Most can be deactivated, but one new one cannot. It helps a driver avoid collision by amplifying steering input and braking selectively at each wheel.

Like its level of driveability, utility and luxury, the car is unmatched in this area.