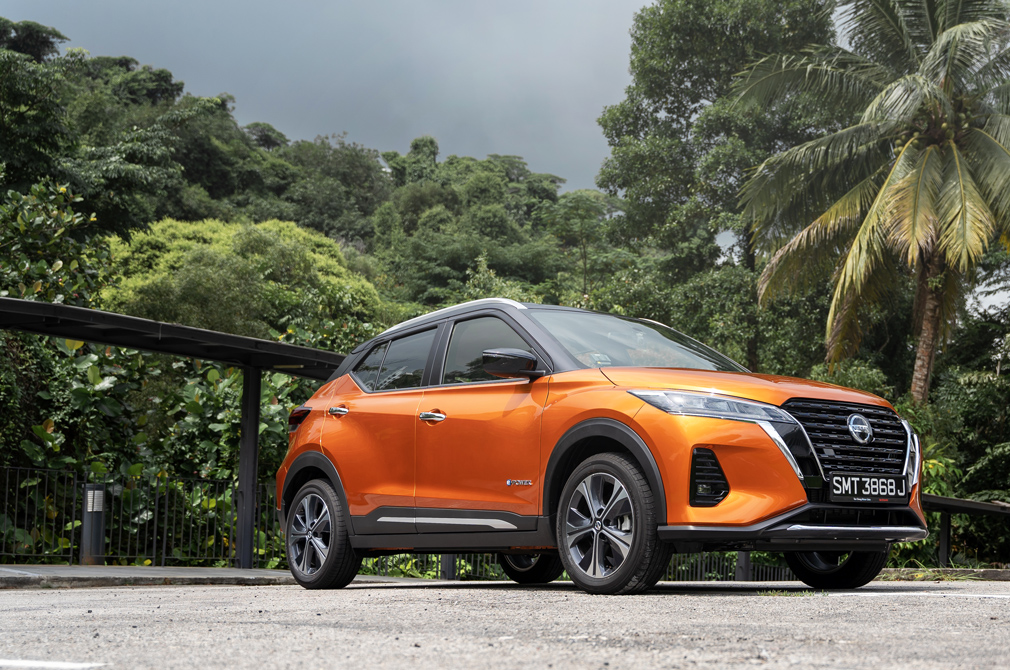 A car with “Kicks” for a name must surely be fun.

After all, the first thing that comes to mind is the phrase “to get your kicks from”, which means “to derive fun or pleasure from”. One also can’t help but think of the phrase “alive and kicking” as well.

There’s also a hip definition of the word “kicks”. It’s slang for shoes, according to Urban Dictionary.

From its name alone, the Nissan Kicks sure sounds like a fun, snazzy and dynamic kind of car. 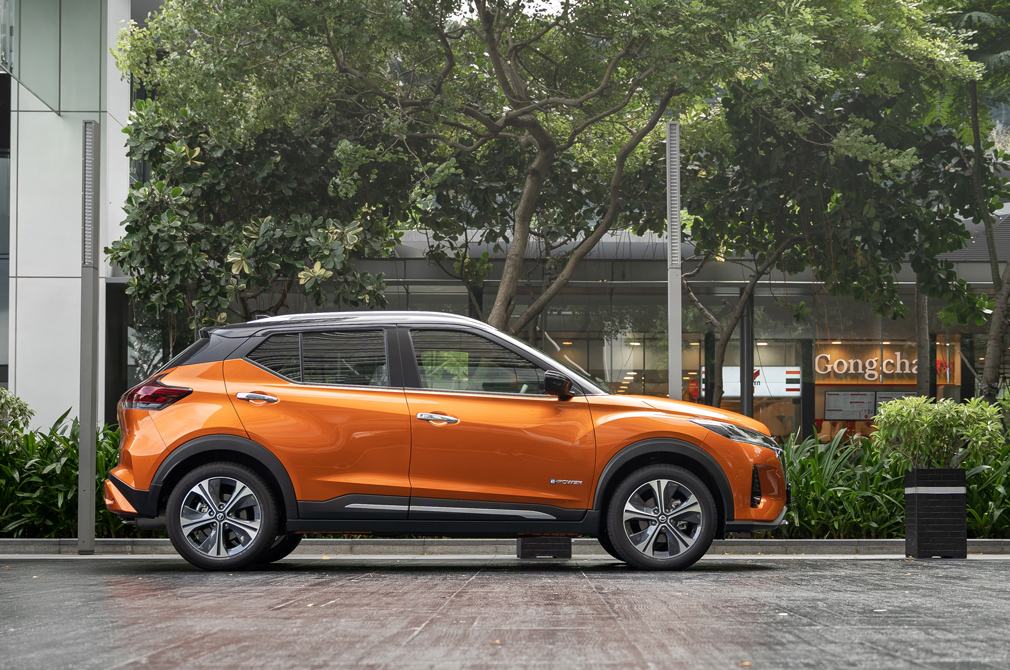 My first encounter with the Nissan Kicks was with this Sunrise Orange-hued model, and the colour made it an eye-opener.

The design is eye-catching, too. Nissan’s big V-shaped grille dominates the front end, and it seems to even extend into the headlights.

Swollen fenders all-round lend this compact crossover a rugged vibe. The rear end is filled with sharp creases and bulges, and has the most oddly-shaped tail-lights I’ve seen in a while.

All these elements make the Nissan Kicks stand out on the road – without making it come across as attention-seeking. If the aim is to attract younger motorists, I’d say the designers are on the right path. 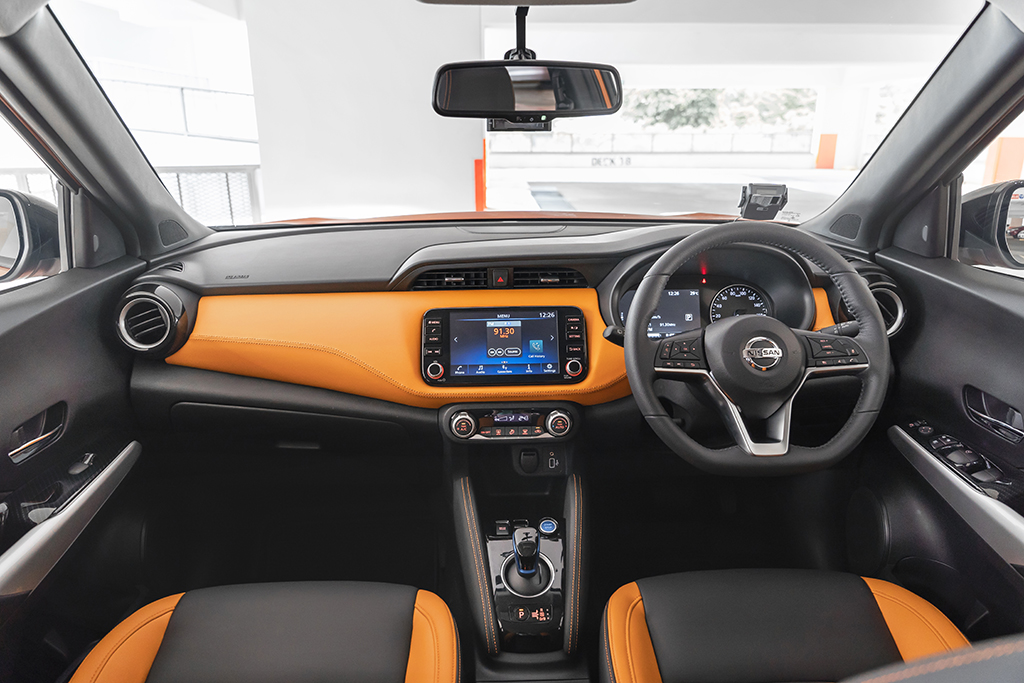 PUT ON THESE KICKS

You’d expect the Nissan Kicks’ interior to be just as eye-catching as its exterior and it is – provided you’re buying the Premium Plus variant.

However, the orange and black combination you see isn’t just specific to Sunrise Orange cars. It’s standard across all Premium Plus variants, no matter their exterior hue.

That might be okay with some, but it could also be a “kick to the eyes” for others. 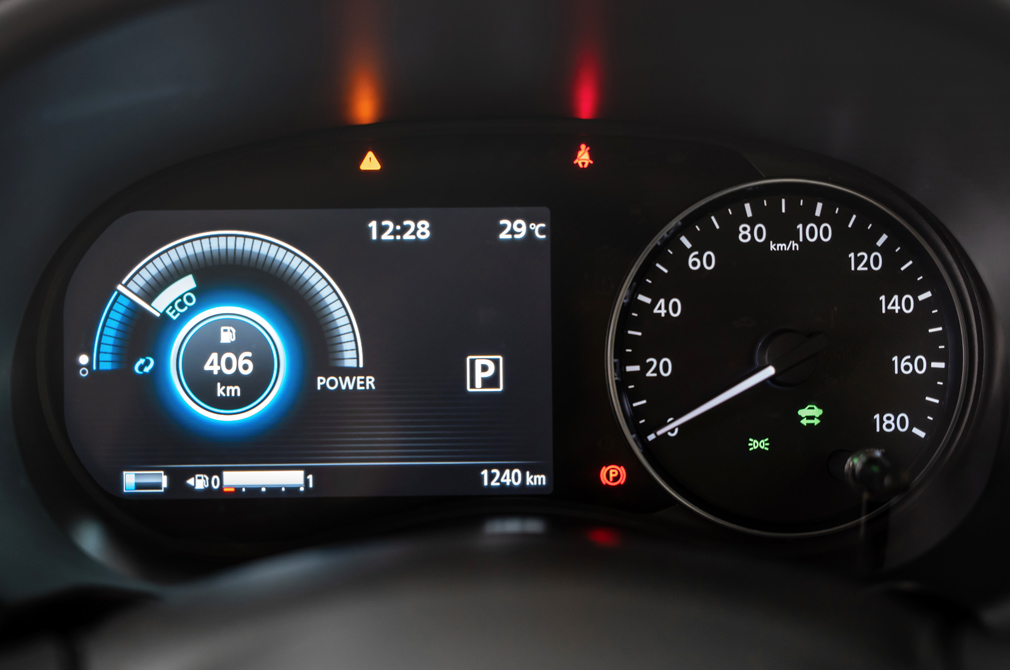 Colour clashes aside, the Nissan Kicks’ cabin is neat, functional and comfortable. You won’t be overwhelmed by buttons, and the controls on the dashboard are intuitive. Plus, your bum is cossetted by what Nissan calls “Zero Gravity” seats, which are cushy.

Facing the driver is a part-digital, part analogue instrument cluster – the same one seen in the all-electric Nissan Leaf. But considering how the 7-inch digital screen takes up more than half the real estate, one wonders why Nissan didn’t just go all digital here.

The 8-inch infotainment system is easy to use, although I did want the screen to be even more responsive. The bigger bummer is the lack of wireless charging, a feature that has become common in new cars today. 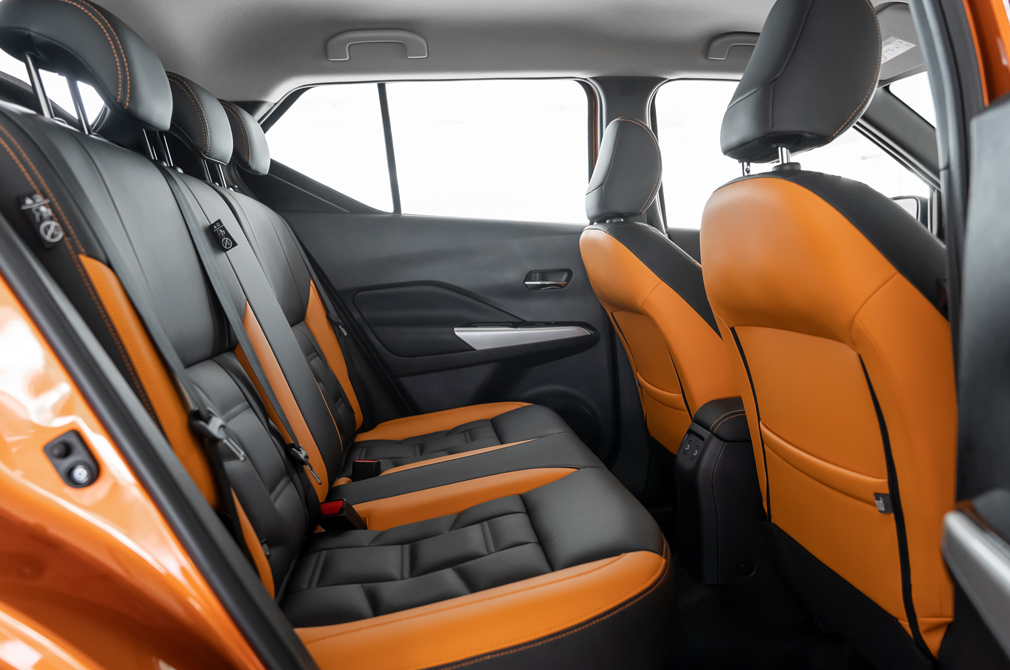 SPACE FOR PASSENGERS… BUT MAYBE NOT THEIR KICKS

The Nissan Kicks is a compact crossover, but it’s larger than rivals such as the Hyundai Kona Hybrid and SsangYong Tivoli.

However, the Nissan Kicks’ 2620mm wheelbase still has its limitations. Legroom is decent for passengers 1.75m or shorter, but they’d better have smaller feet as foot space is at a premium.

Fitting three adults is possible, but it’s going to be a bit of a squeeze for the centre occupant, who also faces a rearward-protruding console.

That said, the rear bench is relatively comfy and it doesn’t get too stuffy here despite the lack of rear air-con vents. Chalk that one up to the wintry air-conditioning – I actually had to set the system to 24 degrees C instead of my usual 20 or 21.

The 423-litre boot is reasonably large for a crossover of this size, though it could have been even bigger if not for those wheel arch intrusions. 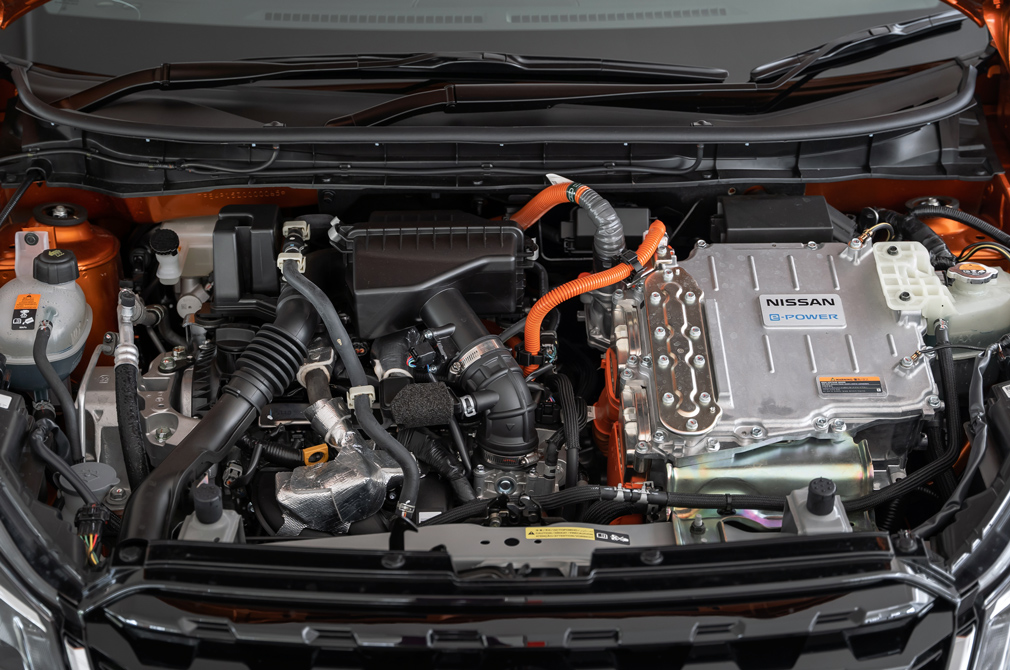 Given its dynamic styling, you’d expect the Nissan Kicks to deliver a sporty drive. It does – just don’t expect the traditional kind of sportiness.

The “e-Power” in the Nissan Kicks’ name refers to its electrified drivetrain. The Kicks isn’t powered by its 1.2-litre 3-cylinder motor. That engine only acts as a generator to charge the lithium-ion batteries.

Most eco-conscious drivers here will find that this drivetrain makes more sense than a full-electric one. Instead of having to find a charging point, you only need to pump petrol to keep the Kicks going.

You get to enjoy electric power and lower emissions, minus the stress of range anxiety.

The Kicks’ efficiency is relatively good, too. I managed a combined consumption figure of 17.4km/L and with more expressway jaunts, this crept up to 18.2km/L – not far from Nissan’s claimed 21.7km/L. 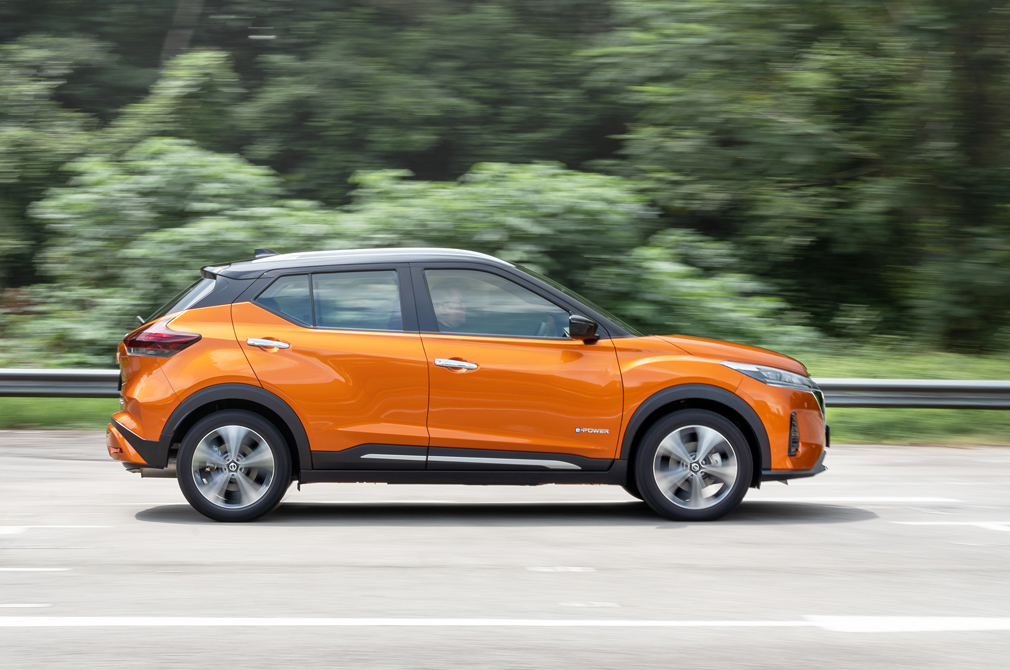 Nail the accelerator to the floor and the Nissan Kicks readily scampers forward. This is soon accompanied by the petrol engine, which is keen to prevent the batteries from running out of juice.

Zero to 100km/h is over in 9.7 seconds. And like a pair of running shoes, the Kicks is willing to let the driver get his or her kicks from pushing hard.

It may not be tuned for handling, but the Nissan Kicks didn’t mind being chucked into corners. Its compact size makes it feel hatchback-like and easy to control.

I daresay this is the most fun I’ve had in a Nissan crossover since the Juke Turbo in 2010. 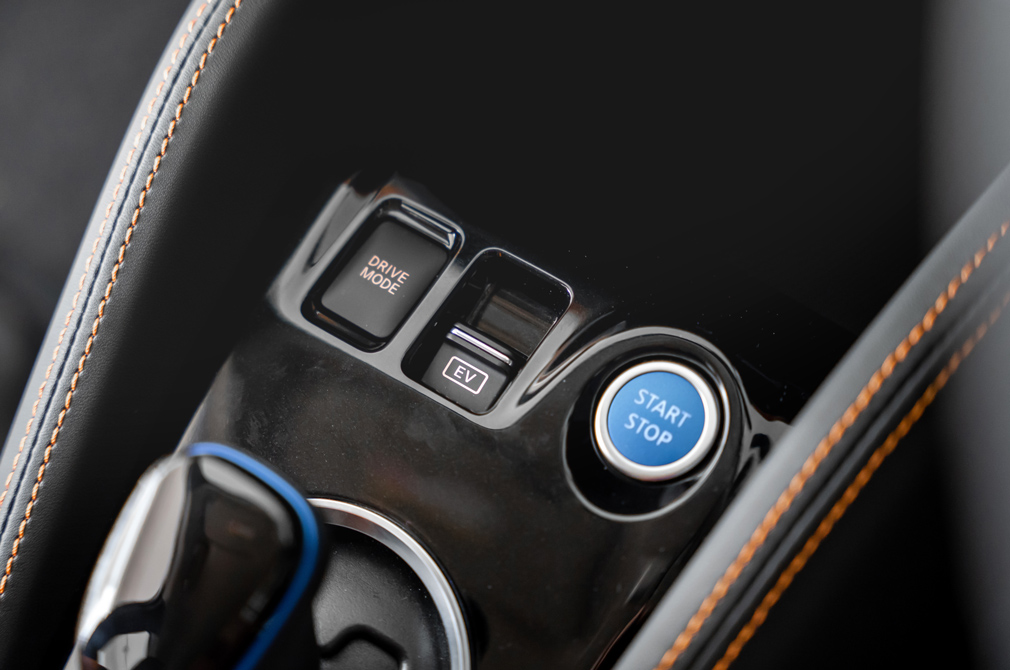 Aside from the default Normal mode, Smart (S) and Eco modes are also on hand. Both latter settings allow for one-pedal driving – releasing the accelerator pedal results in strong regenerative braking that brings the crossover to a halt.

Speaking of parking, the Nissan Kicks’ reversing camera’s display is integrated in the rear-view mirror.

Some might be okay with this, but if your current car displays the footage on the infotainment screen, this is something you would have to get used to.

A KICK IN THE PANTS?

Are this crossover’s looks and abilities enough to convince buyers?

My only issues with the Kicks are minor. I’d like more colour options for the interior in the Premium Plus variants, a fully digital instrument panel, wireless phone charging and more feedback from the helm.

But as I like to tell my friends, go and take the car for a spin. Then see if you get your kicks from driving it, or if it gives you a kick in the pants.

That goes double for the Nissan Kicks. 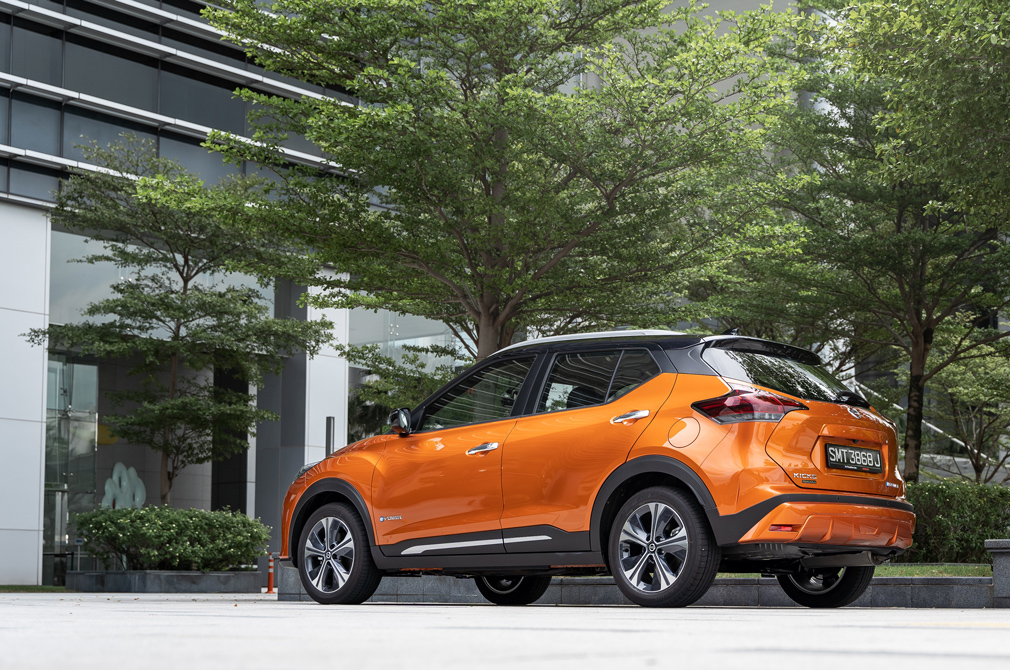