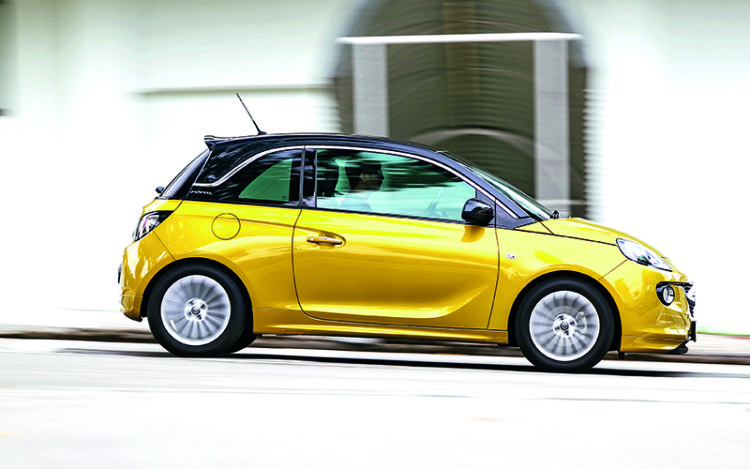 This is one of the slowest Opels around. It takes almost 14 seconds to accelerate from a standstill to 100km/h, and it took over three years to reach Singapore, having made its Europe sales debut in early 2013.

The MINI One and Fiat 500 are the Adam’s natural rivals – all three are chic city cars that love to act cute.

The cuteness in the case of the Adam comes from its styling and colouring. The pint-sized Opel looks less cherubic than the Fiat and less dramatic than the MINI, but has the curves and designer details to make people smile.

The Adam’s body colours, with a roof in contrasting black or white, are cheery, and some of them have creatively corny names – Goldbusters (our test car’s paint job), Greenspotting, Pink-Kong and Purple Fiction.

There’s nothing lurid about the interior, which is less colourful than the exterior. The most sensationalpart is the instrument cluster, thanks to its bright red lighting scheme. Most of the materials and switches are what you’ll find in any modern Opel hatchback, except for the likeable silver accents and the dash-top’s funky texture/pattern.

The front seats seem bigger than “supermini size” and serve up plenty of space that belies the car’s compactness, but their leather upholstery feels economical and there’s no footrest for the driver.

The backseats are really cosy and could be easier to access/exit, but they’re “windowy” and provide useful storage points for personal effects.

The front is practical, too, thanks to roomy doorbins and a spacious console box. But the glovebox is so cramped and awkwardly shaped, it can barely accommodate an (Adam’s) apple.

Speaking of which, the small 170-litre boot can hold maybe two cartons of (Adam’s) apples, along with several large bottles of (Adam’s) apple juice. The tailgate opener, by the way, is neat – it’s integrated with the Opel blitz emblem.

Visibility from behind the wheel is good, except over the left shoulder where the chunky C-pillar and front passenger’s headrest can obstruct the view.

All the controls, including those on the steering wheel, are foolproof, and the features they control are plentiful for a supermini – digital climate, cruise, tyre pressure monitoring, Bluetooth, USB and touchscreen audio. For some reason, the radio reception sounds patchy and the reverse sensors sound uncertain.

Engine ignition is by twisting a key in a keyhole and not by pushing a push-button, but there’s an Eco switch to activate/disable the fuel-saving auto start-stop function. The restarts are shaky, so I would prefer to disable the Eco mode.

The Adam’s performance is adequate, and not only on Adam Road. The 1.4-litre engine has only 87bhp and 130Nm, but the output only needs to pull just over a tonne of Russelsheim runabout. From 3000rpm, the torque gets to work and the hatchback hurries up.

Its robotised manual 5-speeder tends to be in less of a hurry, though. Even though its operation in D is less uneasy than the old Easytronic and it responds easily in M, the gearbox still requires familiarisation. The gate pattern needs to be learnt, and the in-dash gear indicator is somewhere between tiny and invisible.

It’s possible to have some fun with the Adam’s transmission, without breaking a gear or the law. But the car doesn’t allow you to over-rev the engine, displaying an “Engine Overspeed” warning at 6500rpm, and it also doesn’t allow the engagement of a gear that will be too high or too low, notifying the driver by showing “Shift Denied”.

There’s no denying the downtown manoeuvrability of this little Opel. Its turning circle is tight at 10.2 metres and its steering is light, so multi-point turns in carparks and on city streets are a piece of German chocolate cake.

Less chocolatey, however, is the ride. It’s supple but unable to fully absorb bad tarmac, and there’s road noise from the front at expressway speeds. The nimble handling, however, puts some chocolate back into Opel’s compact concoction.

In terms of dollars and sense, the Adam is less attractive than the 1-litre Astra, which costs just a few thousand bucks more. But in terms of adorableness and amusement, the Adam is awesome. 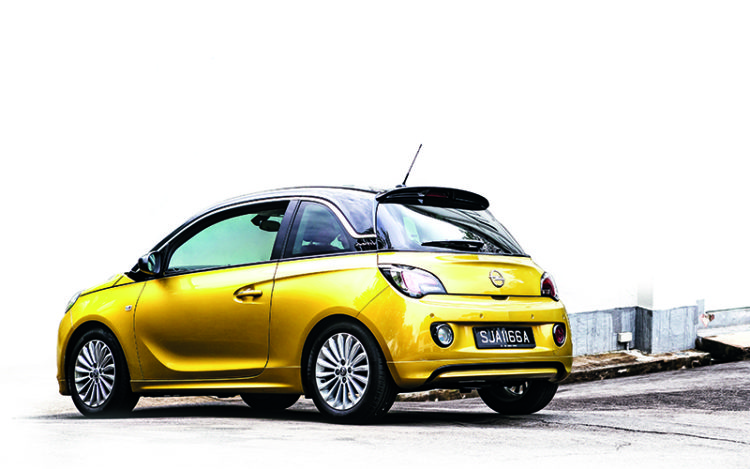