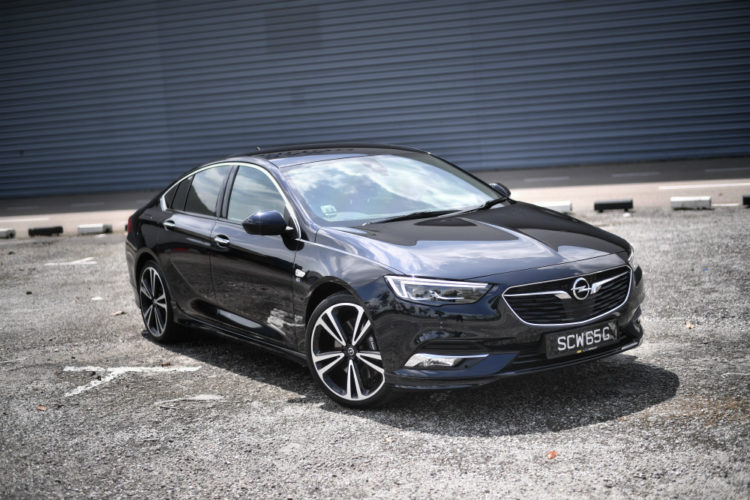 There are two types of rare cars. Something like the Pagani Zonda is one, while Opel’s Insignia is the other.

No one whipped out their mobile phone to take a picture of the Insignia Grand Sport during my three-day test-drive. It’s a shame. The new Opel is really quite peachy.

In size and form, the executive sedan sits in the same ballpark as the Mazda 6 and Volkswagen Passat. The car is longer, wider and taller than the Mazda 6, but its wheelbase is 1mm shorter at 2829mm. Against the Volkswagen Passat, it is larger all around.

However, the Passat 2.0 R-Line – which goes for about the same price as the Insignia Grand Sport – is the swiftest of the three.

At the wheel, the Insignia shines with its easy acceleration in the mid-range power band. But its kick-down response can be a little tentative at times.

With an 8-speed transmission versus six-speeders in the other two cars, the Insignia’s long-leggedness comes into play at higher speeds. Its maximum velocity of 250km/h is the highest of the three.

On Singapore roads, the car’s 8.6 litre/100km (11.6km per litre) fuel economy is also a tad more realistic than the 6-plus or so stated for the other two cars.

When cruising, the Opel excels with its relaxed cushiness. While comfort mode offers the most fluid ride, sport mode is preferred for more controlled rebound. 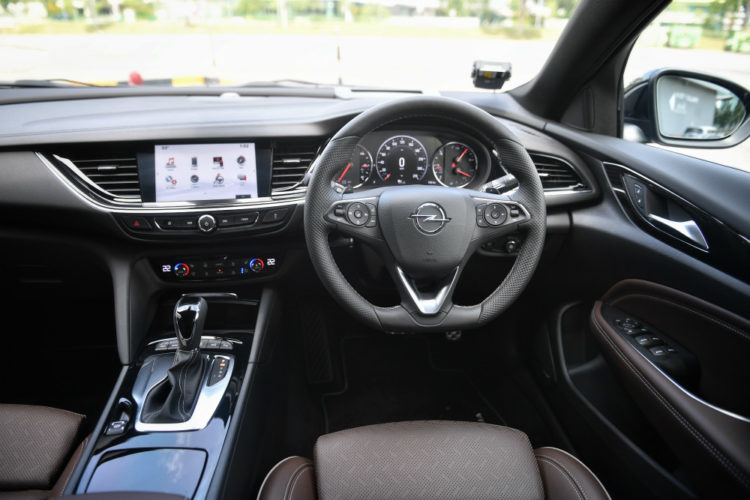 In fact, sport mode is preferable all round, giving the car the best steering and throttle response – without compromising comfort or refinement.

On the move, the Opel exhibits the same breezy lightness as the Passat, with as little vibration but with smoother progress through the gears.

Its all-wheel-drive system puts the car in the same league as Audi’s quattro line-up. Like all modern all-wheel-drives, it does not rob the car of its spontaneity under normal driving conditions and should give it an edge under abnormal conditions.

The Insignia’s main letdown is its cabin furnishing. Hard, unyielding plastics overwhelm the interior, giving the car a touch-and-feel which does not quite gel with its price tag.

Its cockpit is good-looking enough, though. You will find a simple and neat layout with a sizeable infotainment tablet console and semi-digitised instrumentation.

No zany parking brake lever this time – Opel has opted for an electric system, like many others.

The start button, however, is tucked away and obscured by the biggish steering wheel. Thankfully, you have to reach for it only twice during a journey.

Lastly, the Opel is a handsome and elegant car, even if it is not outstanding. There is, in fact, a good chance that this new model will not be as rare on the road as the previous generations. Variants include a turbocharged 1.5-litre and 1.6-litre turbo-diesel, with prices starting at $145,888.