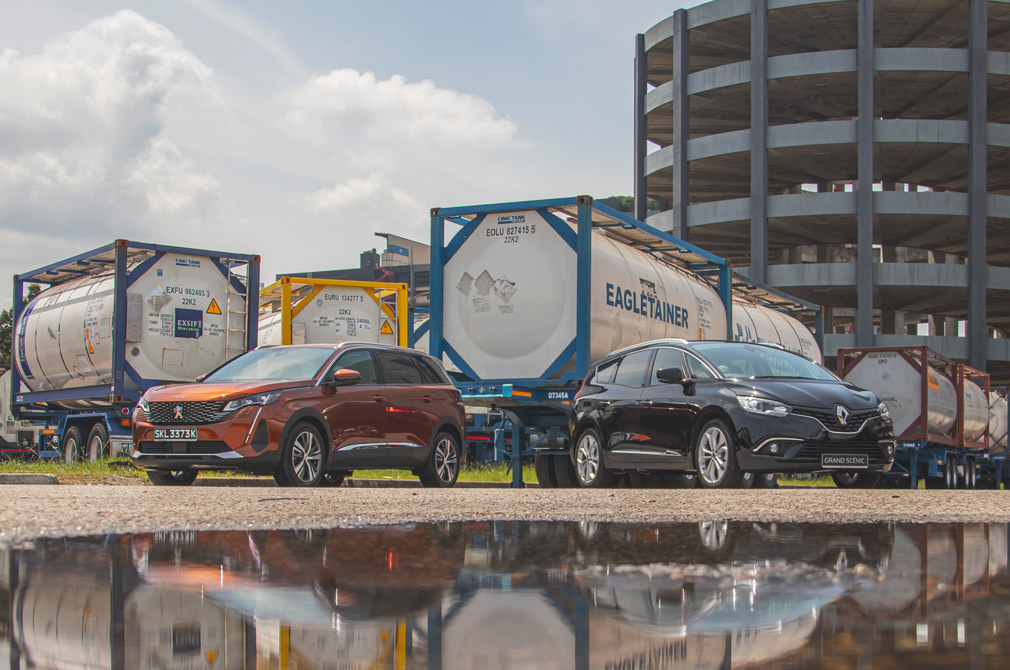 The Peugeot 5008 and Renault Grand Scenic are both seven-seater French family movers with unique design histories. One is an SUV that used to be an MPV, while the other is an MPV inspired by an SUV.

The first-generation 5008 was Peugeot’s first proper multi-purpose vehicle (MPV), and a relatively boxy one at that. With the continued popularity of SUVs, Peugeot wisely made this second-gen model an SUV instead.

The Renault Grand Scenic may be an MPV, but this fourth-generation model’s styling is clearly SUV-inspired. In fact, the body was designed around its standard 20-inch wheels, which are obviously there to lend it a stronger stance.

Now, our two contenders may not have the same body styles, but they are what buyers shopping for a seven-seater will see when they walk into the Peugeot and Renault showrooms. Let’s see how they stack up. 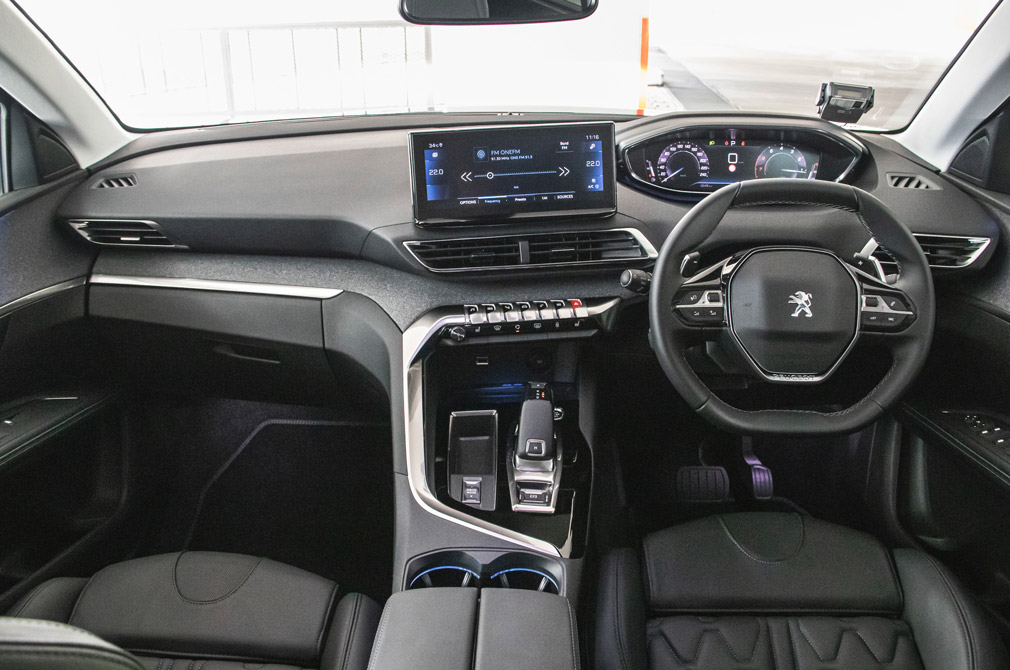 Both the Peugeot and Renault have tidied up their cockpits by reducing physical controls and transferring numerous functions into their respective infotainment systems.

It is hard not to be drawn to the 5008 at first glance, though, for the Peugeot’s cockpit is clearly more attractive and fancier-looking.

The digital cluster not only looks cooler, but also offers a choice of layouts. “Piano keys” located below the 10-inch, HD touchscreen give you direct access to the most used infotainment functions. Oh, and you get a fancy gearshift lever, too.

The Renault Grand Scenic may not be big on aesthetics, but it feels more spacious and has better outward and lateral visibility, thanks to the large windscreen and quarter windows by the A-pillars.

It also scores high on practicality with its movable centre console, whose huge storage compartment offers plenty of room for loose items. 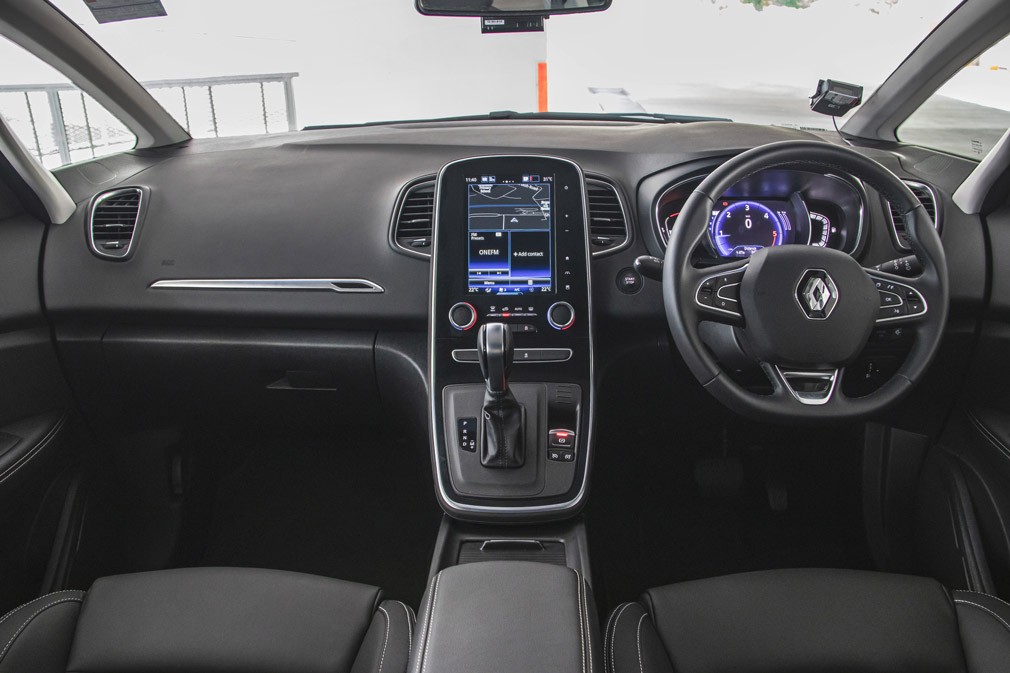 Grand Scenic’s cockpit isn’t big on aesthetics, but its overall usefulness and outward visibility are better than the 5008’s.

The Grand Scenic also has a neat trick for parents: You can fold down the rear seat backrests via a menu on the tablet-like infotainment screen – pretty handy when you need to go from people-mover to cargo-hauler.

For drivers, the Grand Scenic’s conventional gearshift lever has another advantage – it makes it easier to access the manual override mode. The -/+ points are in the “correct” positions, too.

In the 5008, you need to press the “M” button on the gear lever and use the paddle shifters. 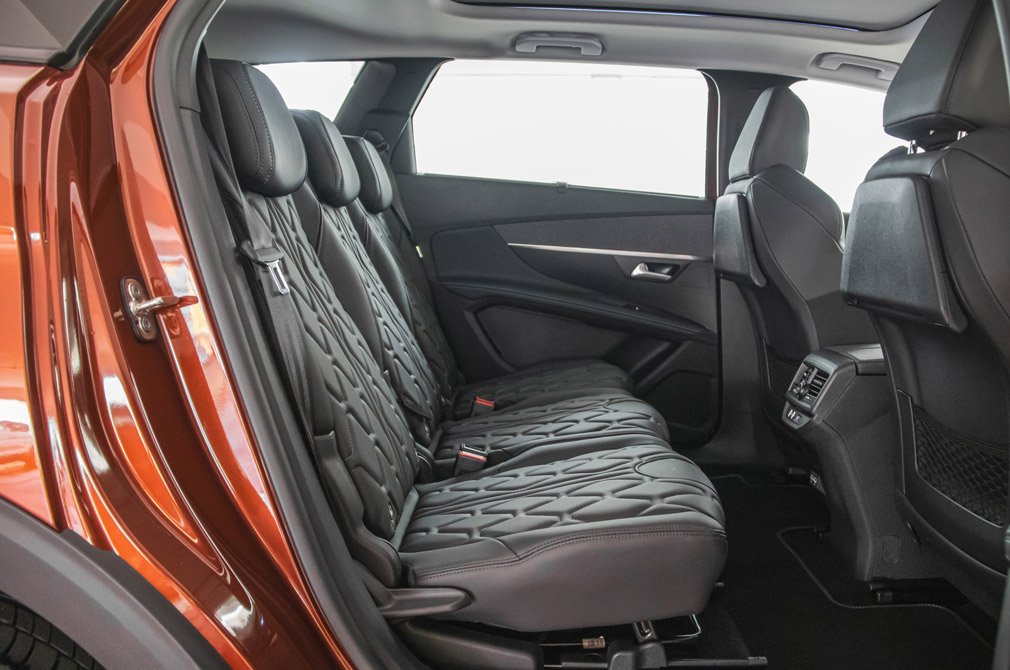 Being an MPV, the Grand Scenic is roomier than the 5008, despite the latter having a longer wheelbase. The middle occupant in the Renault also gets a tad more legroom, especially when the centre console is moved forwards.

Both cars are equipped with airplane-style folding tray tables, but the ones in the Grand Scenic are more convenient, with elastic straps that can be used to secure bottles and/or utensils.

Although the 5008’s wheelbase is longer than the Grand Scenic’s, it is the latter’s third-row that is more spacious. In the Peugeot, the last pair of seats is really only suited to small children, while in the Grand Scenic, two adults can still be convinced to sit here for short drives. 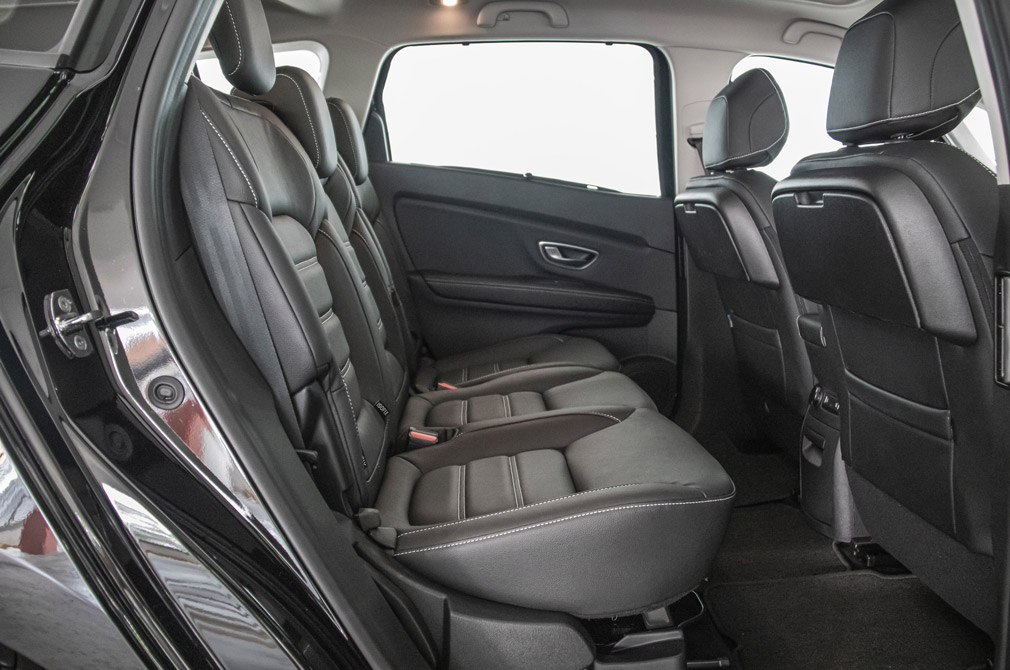 Grand Scenic’s second-row feels more spacious, and the air vents are in a better location, too.

Both the Peugeot 5008 and Renault Grand Scenic are capable cargo haulers, but the latter has the edge in capacity and overall usefulness. With the third-row backrests folded, the 5008 offers 780 litres, while the Grand Scenic boasts 1030 litres.

The Grand Scenic also has the advantage in convenience, for in the boot area is a second, physical set of controls for folding the backrests.

It would have been even better if they also allowed you to raise the seatbacks, but it sure beats having to do everything manually in the 5008. Both contenders have opposite approaches when it comes to drivetrains. The 5008 is petrol-driven, whereas the Grand Scenic is diesel-powered.

Powering the Pug is a turbocharged 1.2-litre inline-3, capable of 129hp and 230Nm. Paired to an 8-speed automatic, it does the century sprint in 10.2 seconds – 3 seconds clear of the Grand Scenic.

The Grand Scenic, on the other hand, has a 1.5-litre inline-4 turbo-diesel producing 110hp and 260Nm. It is mated to a 7-speed Efficient Dual Clutch gearbox.

It may not be as quick, but the Grand Scenic’s greater torque still enables it to pull away from a standstill without much effort. And the gearchanges here are quicker, too. Interestingly, both cars churn out their max torque figures at 1750rpm.

Naturally, the Grand Scenic is more fuel-efficient than the 5008, with a stated figure of 25km/L versus the Peugeot’s 19.2km/L. 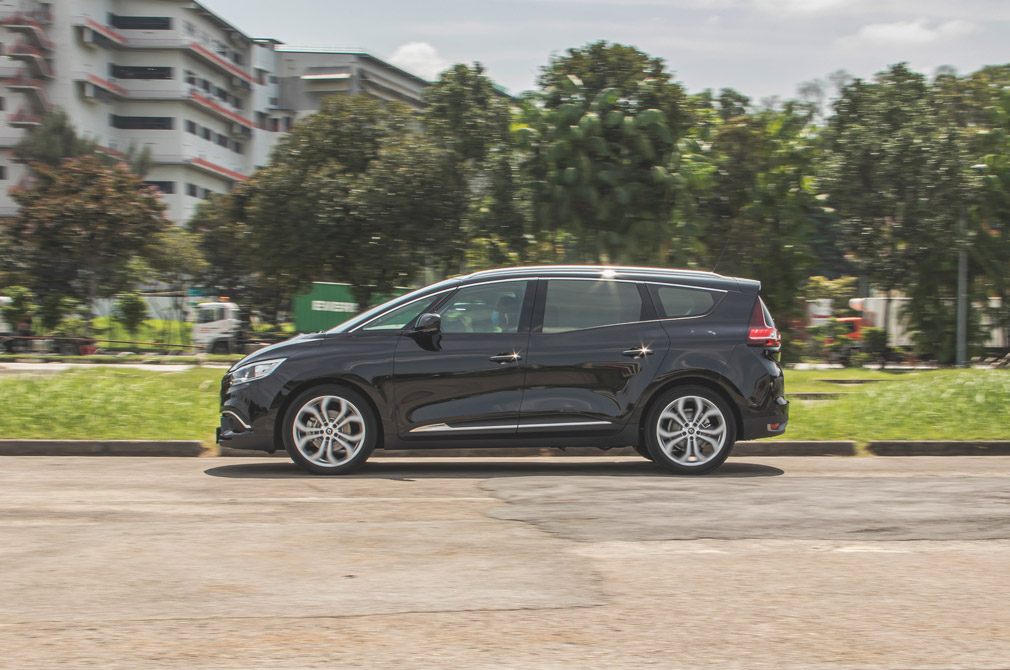 The 5008 is clearly the looker here. When it comes to aesthetics, its exterior and cockpit designs are likely to turn more heads than the Grand Scenic.

From a driving standpoint, the 5008 also offers quicker performance. And yes, that compact steering wheel helps it feel nimbler than it actually is.

However, it is the Grand Scenic that does better in the business of people-moving. It is roomier and more importantly, more versatile when you need it to be. The remote controls for folding the seatbacks are really handy as well.

All told, if you primarily need a five-seater with the flexibility of an additional pair of seats for occasional use, then the Peugeot 5008 is what you should consider.

But if you need a proper seven-seater with better cargo-hauling utility to boot, then have a look at the Renault Grand Scenic. 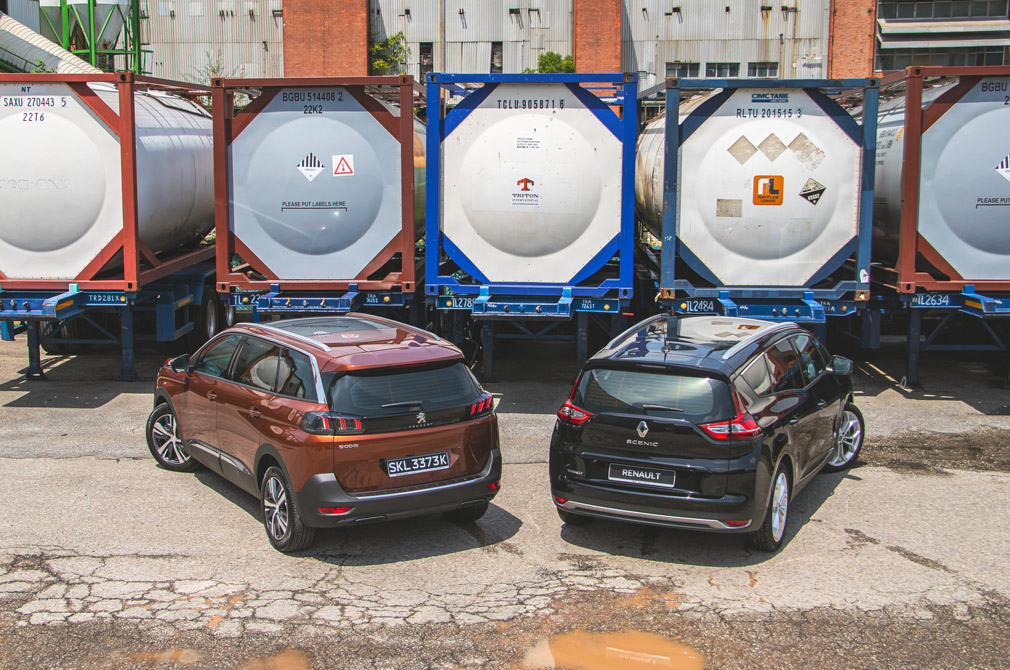 Looking for a seven-seater luxury SUV? We pit the Mercedes-Benz GLE450 against the Audi Q7 in this Group Test