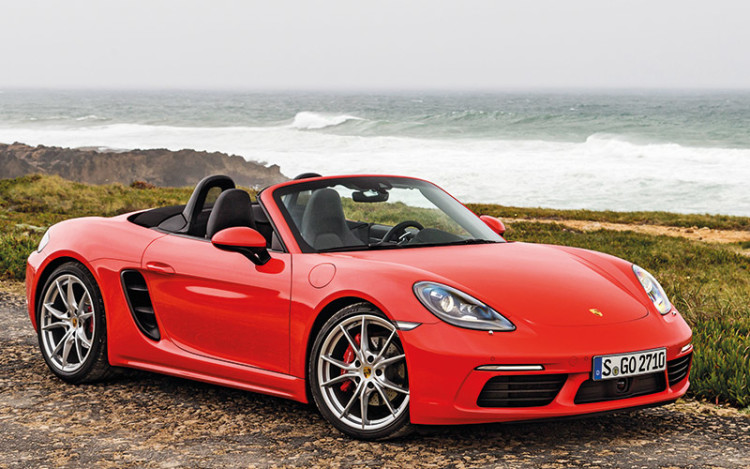 Most people would throw a big party to celebrate a landmark birthday. But Porsche is marking the 20th anniversary of its hugely popular roadster, the Boxster, by giving the car a comprehensive mid-term update… and a deed poll.

Instead of being known simply as the Boxster, the car has been renamed the 718 Boxster. Predictably, the Boxster’s hard-top brother is now known as the 718 Cayman.

And therein lies a clue as to the biggest change Porsche has made to the new Boxster. Like the old 718, the latest Boxster is now powered by a 4-cylinder boxer engine instead of the 6-pot that has driven every Boxster model to date.

Apart from the cylinder count, engine capacity is down, too. The Boxster and Boxster S now use all-new turbocharged 2-litre and 2.5-litre units respectively, instead of the naturally aspirated 2.7-litre and 3.4-litre units of before.

The smaller engine runs maximum boost of 1.4 bar, while the 2.5-litre manages with 1.0 bar.On the Boxster S, the turbocharger benefits from variable-turbine geometry, a feature which hitherto had been the preserve of the flagship 911 Turbo.

Despite the downsizing, output is up by 35bhp in both cases, to 300bhp and 350bhp respectively. Torque figures have taken a jump, too – the Boxster gains 100Nm and the Boxster S, 60Nm, delivered much earlier and over a wider rev range than before.

But notwithstanding the physically smaller engines, there is no weight benefit because the reduced mass of the smaller block has been negated by the presence of the turbo, intercooler and associated piping.

Performance is markedly improved, with the Boxster and Boxster S now hitting 100km/h in 4.7 and 4.2 seconds respectively when equipped with the 7-speed PDK dual-clutch gearbox and optional Sport Chrono pack (which shortens the two Boxsters’ 0-100km/h acceleration by 0.2 of a second), on their way to top speeds of 275km/h and 285km/h – stunning figures for what is, remember, the “junior” sportster in Porsche’s range. 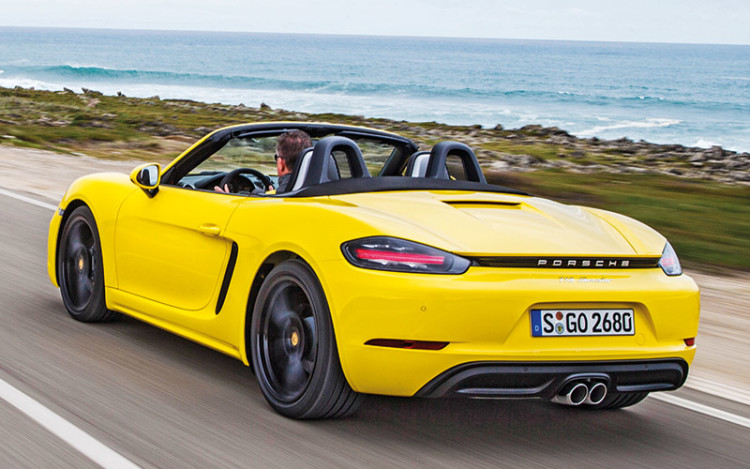 With its remarkable century sprint time, the Boxster S in particular comes perilously close to treading on the toes of the newly revised 911 Carrera.

Impressively, Porsche says all this extra performance goes hand-in-hand with up to 13 percent better fuel efficiency.

Visually, the 718 Boxster looks like a sharpened version of its pretty predecessor, but Porsche resolutely refuses to use the “F” word – facelift – and describes the model instead as a full generation change.

Despite appearances, every external body panel is new, save for the bonnet, rear deck, windscreen and folding roof. 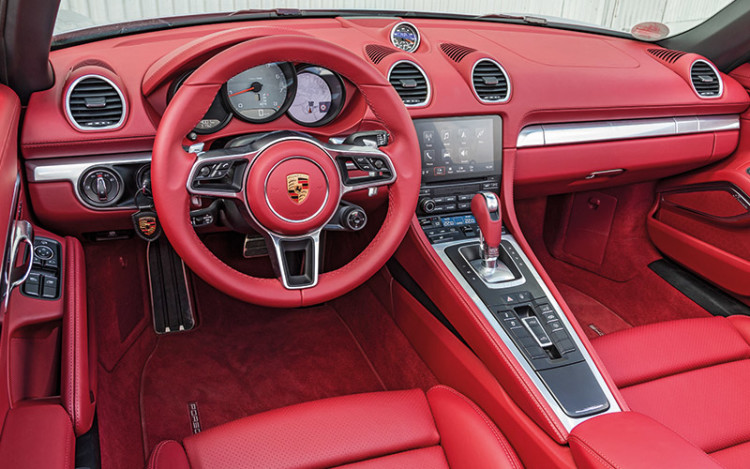 At the back, the rear spoiler stands higher than before, and it no longer extends visually into the tail-lamps like on the old car. Consequently, the tail-lamps have lost their distinctive lateral protrusion and now look more generic. The Boxster S is distinguished by twin circular tailpipes, where the Boxster has a single, trapezoidal one.

Apart from the new boxer engines, there are lots of other changes under the skin.

The steering rack is borrowed from the 911 Turbo and is 10 percent quicker than before, there are new strengthening elements in the rear suspension for greater rigidity and accuracy, and the rear wheels are half an inch wider. The dampers are all-new and sturdier, and spring rates have been changed to reduce roll and pitch.

The optional Porsche Active Suspension Management (PASM) system with its 10mm-lower ride height and selectable adaptive damping has been revised, with a wider spread of damping rates to allow a more compliant ride at one end of the spectrum and even firmer roll resistance at the other.

The brakes are upsized, too, with the Boxster now using the larger brake discs of the previous Boxster S, and the Boxster S in turn adopting the anchors from the current 911 Carrera.

As on the newly revised 911, the Boxster’s various driving modes are now selectable via a small rotary dial on the steering wheel. In the middle of that dial is a Sport Response button which, when pressed, puts the gearbox in the optimum gear and puts the turbo in “maximum attack” mode (by closing the bypass valve, retarding ignition and opening the throttle slightly, even when the driver’s foot is off the accelerator), to ensure maximum acceleration and power for spurts of up to 20 seconds.

The upshot of all this is a monumentally able and exciting roadster. In the Boxster S, pick-up is far stronger than before, especially at low revs where the car surfs along on its newfound wave of turbo torque. 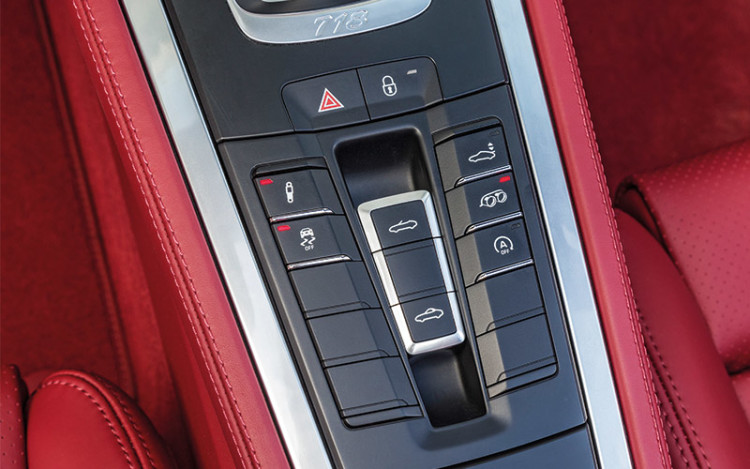 The power delivery in the non-S Boxster is noticeably less torrential, requiring more revs before the car feels seriously rapid, but it’s still hugely impressive for a mere 2-litre.

Notwithstanding the deeper-chested low-end deliveries, both engines are very linear, revving keenly and pulling progressively ever more ferociously up to their 7500rpm redlines.

The downsized engines still sound good, though they lack the thrilling top-end wail of the old flat-6, which is a pity.

At idle, there is a barely discernible boxer throb. On the move, the dominant voice is a purposeful tune, unless the optional sports exhaust system is fitted, in which case your ears are treated to a raspy exhaust note that crackles on the overrun.

The soundtrack itself is fairly uniform through the rev range, unlike the flat-6 whose note morphs in volume and intensity as revs rise, building to a hair-raising crescendo at the peak.

The gearboxes are excellent, as before – a superbly positive, short-throw change action for the 6-speed manual, and instantaneous, whip-crack response on the dual-clutch, paddle-shift-equipped 7-speed PDK.

The Boxster has always been a thrill to hurl down a twisty, undulating road, and the new one remains so. The electro-mechanical steering is delightfully linear and well-weighted, and is even keener now thanks to that 10 percent quicker rack. 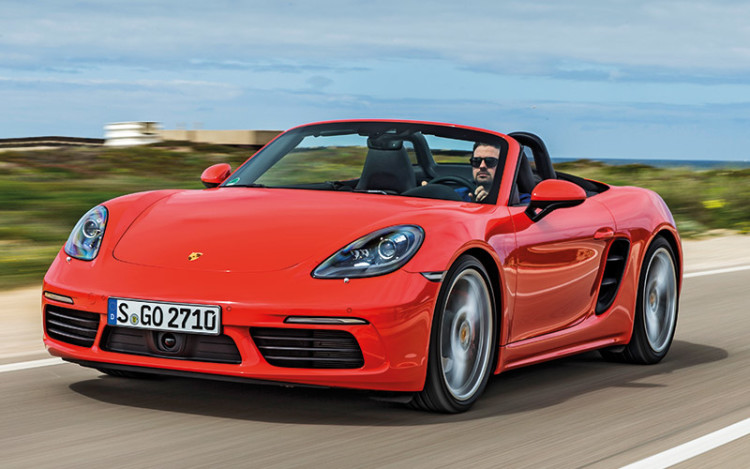 The nose just dives into bends without hesitation or roll, grip at both ends is astonishing, and the car feels incredibly agile, simply refusing to slide unless you are cornering at insane speeds.

Subjectively, the steering feel does seem a tiny bit less detailed and granular than before, but if so, this is a question of micro-degree. In absolute terms, the Boxster’s steering is still up there among the very best.

And when the tyres finally do start to edge wide progressively, there are no surprises because the chassis remains poised and adjustable, displaying the benefits of its ideal mid-engine weight balance. The Boxster is ferociously grippy and able around corners, but never hairy.

The Boxster’s brakes are massively strong, hauling the hurtling car down time and again without fade, and always feeling like there is ample capability to spare. To boot, there is wonderful, confidence-inspiring feel from the firm, progressive pedal.

Porsche estimates the 718 Boxster S will lap the Nurburgring 16 seconds faster than its predecessor, which puts it practically on par with the outgoing 3.8-litre 375bhp limited-run Boxster Spyder. Given the exhilarating way it hurtles through the ducking and diving mountain roads on our Portuguese test route, it is an entirely believable claim.

And impressively, that racecar-like pace and control are coupled with a superb, composed ride. The chassis soaks up everything, even ruts and undulations attacked at speed, and at lower speeds it is perfectly judged as well – firm, but never harsh. On motorways, the car is a superb cruiser, with a well-insulated cabin (with the top up) and relaxed gearing.

And as I discovered on a closed-off military airfield which Porsche thoughtfully provided, it remains rock-solid and utterly stable even at 270km/h.

The Boxster may have a new name and new downsized engines, but its core values remain intact, even after 20 years of development. Happy birthday, 718 Boxster.