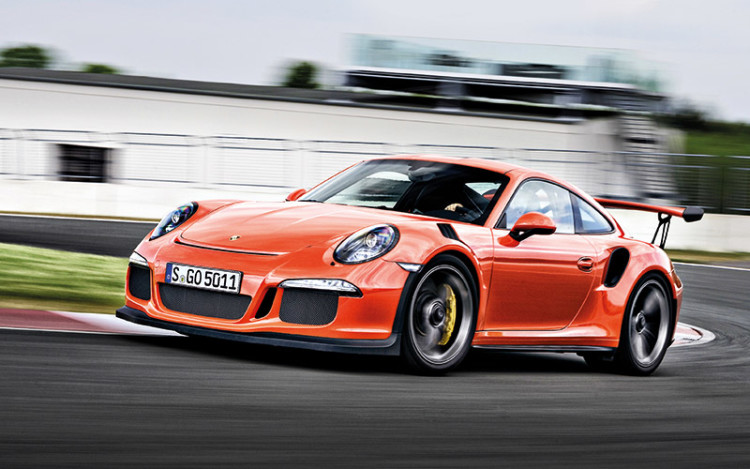 There are few cars in the world as covetable as the 911 GT3 RS. The road-legal racecar is a very desirable collectible – one that appreciates in value the moment it is purchased, with the exception of high-tax countries such as Singapore, where car prices are artificially inflated.

I’m at the Blister Berg Circuit in Germany, the same place where Porsche launched the 911 Turbo and Turbo S two years ago. I can’t wait to put the new GT3 RS through its scorching paces.

Without a doubt, this is the 991 model that causes the deepest visceral stirrings. Demure it is not, and you better not be bashful if you want to drive one of these.

It has the maddest aero addenda of any Porsche today, and according to Mr GT3, Andreas Preuninger, the aerodynamic package of this latest GT3 RS is the most effective of any of the roadgoing cars it has today.

Said aero package delivers up to 345kg of downforce at 300km/h, but only increases drag by just one point to 0.34 Cd compared to the regular GT3.

Much of that is contributed by the big rear wing, but front-to-rear balance is equally important, as the nose can get too light if the tweaking to the rear is too enthusiastic.

As the 911 Turbo body comes complete with a pair of gaping holes in front of the rear fenders, Prueninger tells us the new vents now become the natural path of the induction intakes instead of the intercoolers. Consequently, the car has a unique intake roar that “projects” forward from the ports. Wind down the windows and it’s a furious wail unheard in any previous 911.

There is also a ram-air effect, boosting power at high speed beyond the dyno-certified 500bhp to about 510bhp. 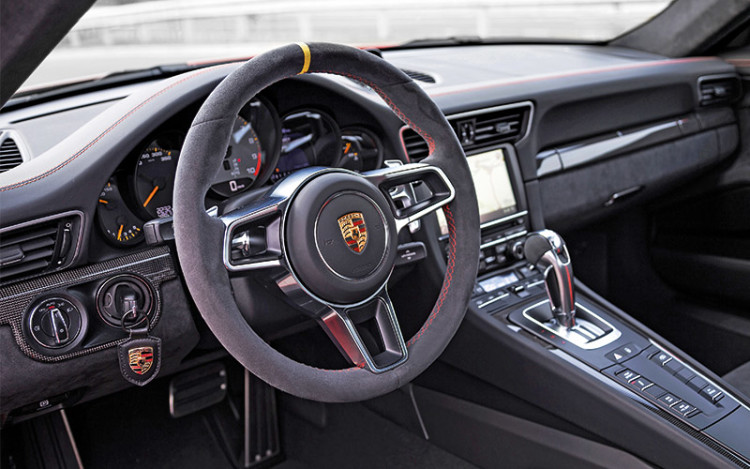 The 991 GT3 already has a widebody, but since the 991 Turbo has an even wider body, the motorsport engineers wanted to capitalise on its handling advantage for the new GT3 RS. The wider body, while sturdier, is also heavier, which goes against the lightweight philosophy of Porsche RS.

Making weight reduction more difficult are the must-have 21-inch rear wheels and much larger tyres all around.

Those tyres come directly off the 918 hypercar and bear a much bigger performance envelope than even the 911 Turbo S. In fact, seeing the GT3 RS with its 265/35 R20 front and 325/30 R21 rear Michelin Pilot Sport Cup 2 tyres makes the Turbo S appear to have skinny snow tyres.

Why such an extreme specification? During the Nordschliefe shakedown for the 918, the Porsche Motorsport development team became so enamoured of the tyres’ phenomenal grip and progressive handling that they didn’t wait for Michelin to homologate another specific set for the new GT3 RS. It simply received the same footwear as the 918.

The weight-shedding programme began in earnest with the roof of the RS. It’s a magnesium composite – one that’s both lighter and stiffer than a carbon fibre roof. It saves 1kg, but every bit helps, especially if it’s weight taken from “above” the cabin, which would lower the centre of gravity more effectively than if the weight came off the bumpers.

Speaking of which, the rear bumper is made of lightweight polyurethane, which sheds another kilogram. The material is used in conjunction with carbon fibre reinforced plastic (CFRP) and aluminum for the engine cover and rear spoiler, resulting in a nett zero kerb-weight change despite the size of said spoiler.

Carbon fibre has not been forsaken, of course. It is used in the front bonnet, saving 2.2kg, and in the front fenders, saving at least half the weight of the GT3’s original aluminium items. The front bonnet is now CFRP instead of aluminum, saving 1.5kg more. The use of clear polycarbonate for the rear windscreen and side quarter-windows saves 3.3kg.

The Porsche folks also cut 1.5kg from the wiring harness and installed a special lithium-ion battery that weighs 4kg less than a normal one. 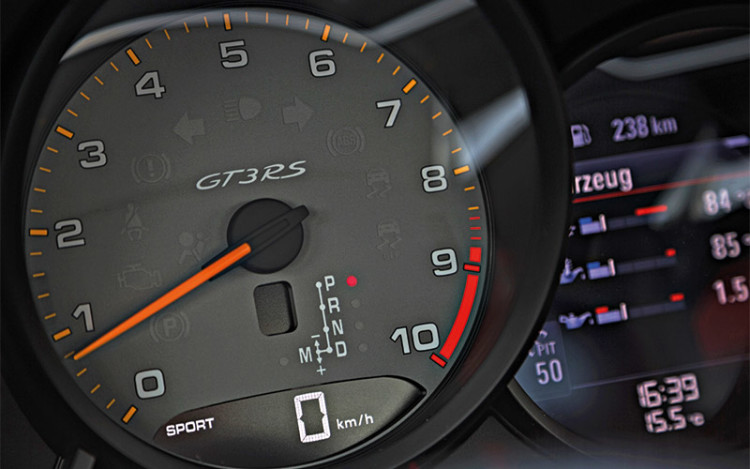 Moreover, the cabin’s sound-deadening insulation has been removed, and lighter-than-leather Alcantara adorns much of the interior.

All in all, the engineers managed to offset, by more than 10kg, the major heavy items that equip the new GT3 RS, namely its 4-litre engine, bigger wheels, fatter tyres and bolted-on roll cage.

As always, the cockpit of the RS is a place of business, where luxury has been thrown out the door. Thankfully, Porsche did not resort to plain door cards – the standard door panels are still there, complete with armrests and proper grab handles, but the door openers have been replaced by nylon straps, which save a grand total of 400g!

The rest of the interior is suitably sombre, but with splashes of colour-coded Alcantara here and there. The special Clubsport elements standard in the RS are the 918-derived carbon fibre seats, fire extinguisher and roll cage.

Something new in the RS is a Pit Speed button on the centre console. This is a speed limiter for the pit lane during track days (or outright race days). User-programmable for between 40km/h and 130km/h, the device works only when the gearbox is in manual-shift mode, and it also deactivates all the electronics that help to stabilise the car, so you better know what you’re doing – in the paddock or anywhere else at the racetrack.

According to Preuninger, these are serious lap times achieved by serious professional drivers, and he doesn’t expect or encourage new GT3 owners to duplicate the feat. 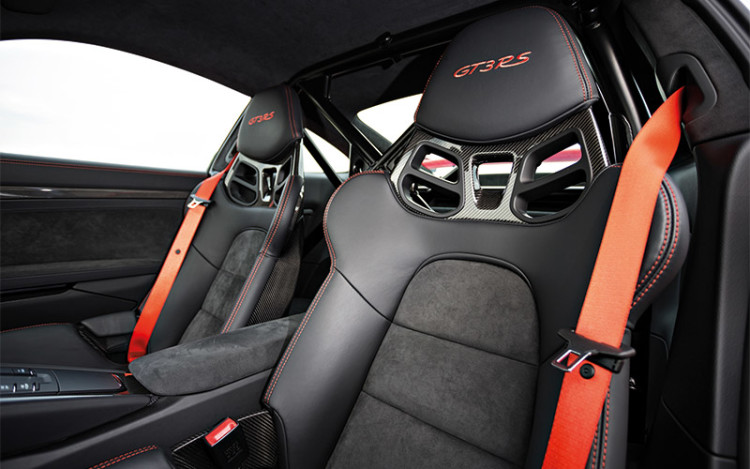 That said, the racetrack is the true home of the 911 GT3, and here I am at the Blister Berg Drive Resort, ready for a morning of hot laps. The pace cars are 991 Turbo S coupes driven at flank speed by Porsche’s development drivers. I see those cars drifting at alarming angles in certain corners, which suggest that the pro drivers are using all the capabilities of the Turbo S to stay ahead of the chasing GT3 RSs.

For me, I’m comfortably within the car’s substantial handling envelope, with room to spare. Opening more of a gap behind the lead car gives me an opportunity to push harder in places. With 150kg to 250kg of aerodynamic downforce acting on the GT3 RS in the fastest corners, it’s pretty hard to make the car run wide.

Also, the gumball PS Cup 2 tyres really refuse to relinquish their grip, so I deliberately provoke them with the throttle pedal. The Porsche Stability Management (PSM) stays on, though, so it’s hard to say whether it’s my corrective actions or electronic nannies that save the car from the provocation.

It is unnerving to have a sports car oversteer at high speeds, but the behaviour is clearly signalled in the GT3 RS, whose brilliant chassis responds faithfully to the corrections done to get the car back in line. 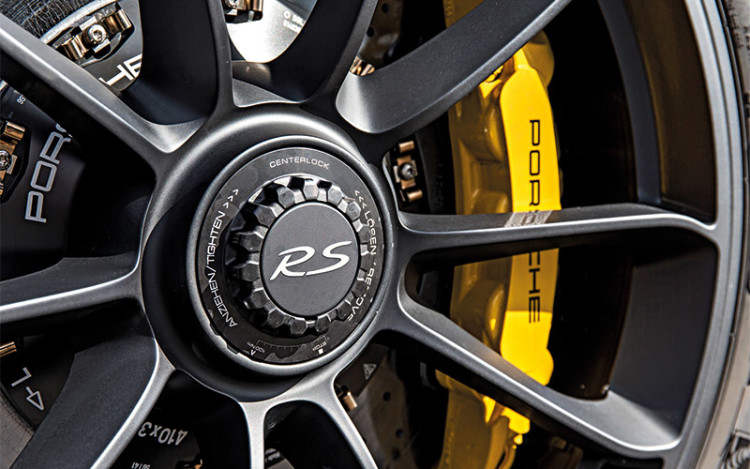 The power from the new 4-litre engine is as linear as it gets, reacting exactly to my right foot’s pressure on the accelerator and delivering the precise amount of power to hold the long, quick drift.

When all 500 Porsche horses are called upon, they act with such a well-measured fury that I’m not intimidated at all. They’re powerful, too, enabling the GT3 RS to keep up with the 560bhp Turbo S on the straights and yielding just a little ground when the massive torque of the Turbo S kicks in.

Thanks to the optimised close-ratios of the GT3’s beefed-up PDK dual-clutch transmission, the 500bhp is put to maximum use in every one of the seven gears, unlike the long-legged ratios of the Turbo. A nice surprise is a bit of a thump from the GT3 gearbox when it’s in max attack mode. 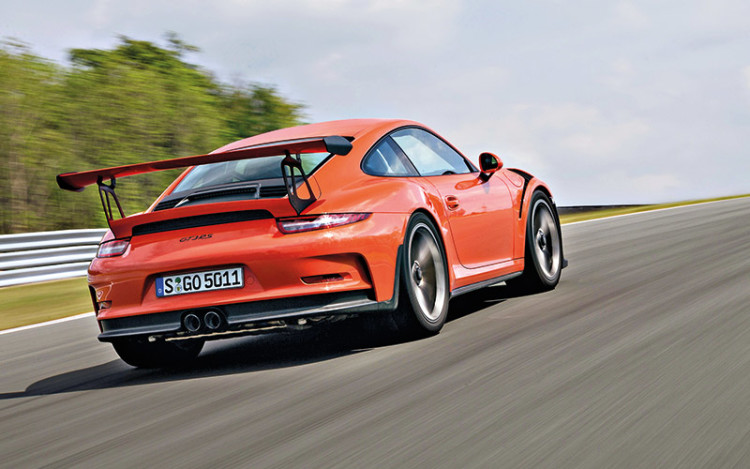 While the handling and cornering grip have been improved substantially, the track-tuned suspension still provides decent everyday comfort.

On the roads surrounding Bilster Berg Circuit, the oh-so-precise steering possesses a lot more feel than the GT3, whose helm is already more communicative than the standard 911 Carrera’s. The suspension suppleness of the GT3, despite it being the tautest of all roadgoing 911s, is amazing. It is, by a small margin, the most comfortable 911 to ever wear the RS tag, and not too far from the daily comfort of a basic Carrera. And this street-legal racer is an auto!

The new 911 GT3 RS is one car I hate to love, but I love it to bits. It’s a serious sports car for an equally serious driver who can fork out almost $900k for it. This superb number has been gifted with Porsche’s DNA, distilled to the bare essence and combined with all the company’s motorsport know-how accumulated over the decades. And it shows.

As the owner of an all-analogue 997 GT3 RS, I wanted to believe that Porsche could never better that car’s hydraulic power steering and bullet-proof “Mezger” engine. But the new 991 GT3 RS completely shatters that notion. I wonder if my house can be re-mortgaged…