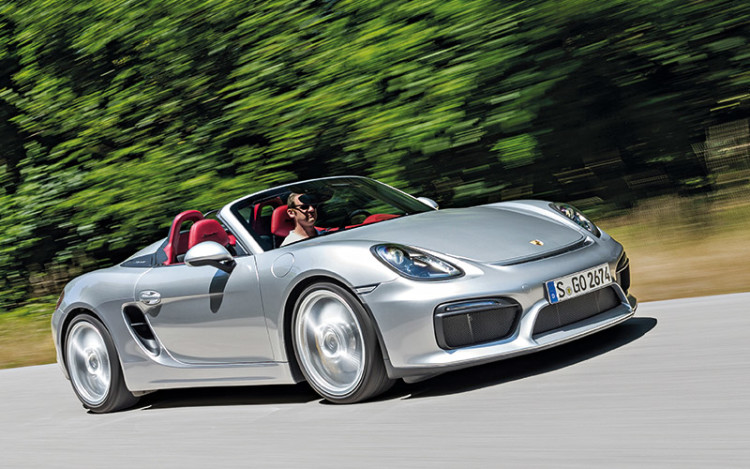 You are getting most of what makes its hardcore stablemate, the Cayman GT4, so special, at a more than $40,000 discount. Because Porsche has shamelessly cannibalised the GT4 to create this, the most focused and potent Boxster of all.

The close relationship between the two cars is obvious at first glance, because the Spyder wears the GT4’s entire front end. This means a jutting, low-chinned front bumper dominated by three gaping intakes, and a horizontal slit-like air vent at the leading edge of the bonnet. These visually set the Spyder apart from the rest of the Boxster range.

Underneath, the Boxster Spyder’s 3.8-litre flat-6 powerplant is identical to that of the GT4 (which nicked said engine from the 911 Carrera S). But because the Spyder lacks the GT4’s sideblades that create a “ram-air” effect at high speed, it has 10bhp less, at 375bhp.

Still, this gives the car a thumping 45bhp advantage over the next most powerful Boxster model, the GTS.

Inside, the Spyder benefits from the GT4’s smaller, Alcantara-covered steering wheel and stubbier gearlever. It is billed as the Boxster for purists, so this new model is manual-only – there is no PDK dual-clutch transmission option.

The gear throw is delightfully short and precise. And if you select Sport Plus mode, the engine automatically blips itself on downchanges to mimic a perfect heel-toe gearchange.

But despite all the similarities, the Spyder is not quite a “Boxster GT4”. It has been conceived as more of an everyday device than the single-minded, track-biased GT4, and to that end, it uses the Sports suspension from the Boxster GTS (but with a stiffer rear anti-roll bar) rather than the GT4’s bespoke, ultra-firm setup.

The brakes are also less extreme, being taken off the 911 Carrera S, whereas the GT4 goes the whole hog with brakes from the 911 GT3. 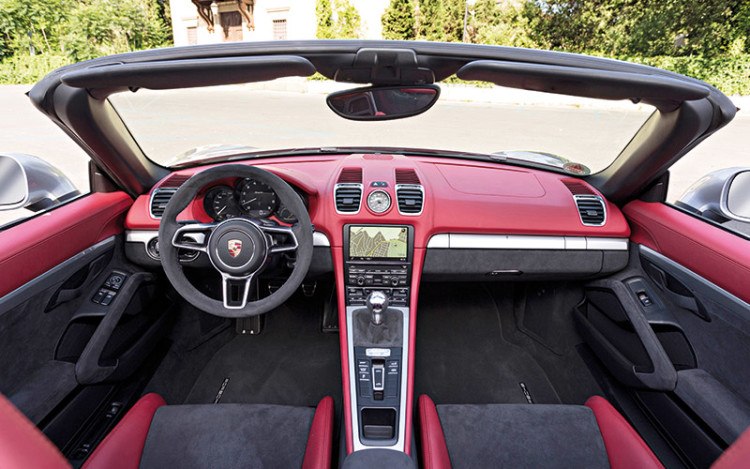 In keeping with the Boxster Spyder’s purist ethos, weight-saving is paramount, which explains measures such as the lightweight bucket seats and reduced sound insulation inside the cabin, and the use of aluminium for the rear deck.

Incidentally, that rear deck, which stretches from aft of the cabin all the way to the ducktail spoiler, sports two pronounced bulges flowing rearwards from the roll hoops, giving the car a unique, unmistakable silhouette. This harks back to the Boxster Spyder’s inspiration – the 1953 550 Spyder, which has a similar longitudinal hump adorning its engine cover.

Most significantly, the folding top is now a lighter, semi-manual system. It looks markedly different from the standard Boxster’s, being lower and with two distinctive “fins” stretching backwards into that raised rear deck. This visually lowers and stretches the hood, and makes an already pretty convertible even more delectable.

The rear window is polymer instead of glass, the hood frame is made of lightweight materials like magnesium and aluminium, and the hood itself is now an unlined, single-layer affair.

Where the regular Boxster has a fully automated folding top, the Spyder’s has to be raised and lowered by hand. The electric switches in the cabin now merely serve to unlatch the rear deck and to operate the header rail catch to secure the hood once it’s in place.

This new-style roof alone shaves 10kg off the car’s kerb weight and also helps lower its centre of gravity. Combined with all the other dietary measures, this makes the Spyder the lightest model in the Boxster range, despite it having the biggest engine.

The payoff for all that weight loss is in the handling, of course. The normal Boxster is already brilliant around bends, but the Spyder dials that up a notch, positively flicking into turns, allowing almost no lean at all, and delivering so much roadholding that on the twisty Tuscan mountain roads of our test route, my courage runs out way before the grip does. 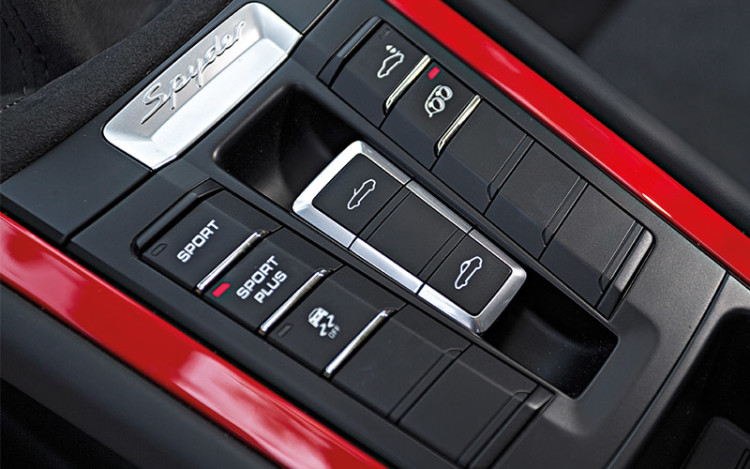 The sensations through that small steering wheel are wonderful, relaying lots of detail about what the chassis is up to as we hurtle along. The steering is ultra-responsive, and quick-geared enough for sweepers to be taken with the slightest swivel of my wrist.

The ride, while significantly firmer than a normal Boxster’s, remains composed enough that the car is not thrown off-line over poor surfaces.

And between corners, the car is ferocious, belting forward with much more urge than the already rapid Boxster GTS. The extra power and torque of that 3.8-litre engine really do make themselves felt right across the rev range. The century sprint is covered in just 4.5 seconds, and top speed is a sky-high 290km/h.

That engine makes itself heard, too, howling its way thrillingly through the midrange to its 7600rpm redline, and crackling like a mouthful of popping candy when I lift my foot off the throttle pedal. If sensory overload is your thing, drive the Spyder flat-out through a tunnel with the top down.

This vehicle does not just devour B roads, it has proven its mettle on track, too – its lap time at the Nurburgring is 7 minutes 47 seconds, a mere 7 seconds behind the Cayman GT4’s benchmark.

It may be the hardest-edged, fastest Boxster, but the Spyder still retains most of the base model’s friendly useability. Add to that the seductiveness of that low-roofed, evocative shape, and you can see why many will be snared in the Spyder’s irresistible web.