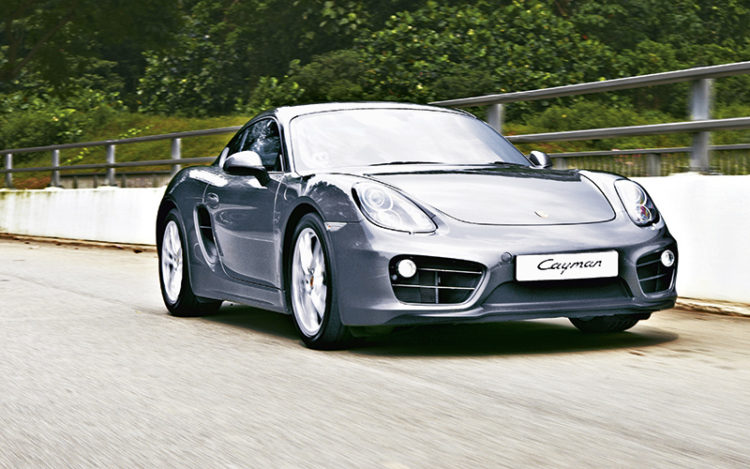 New chassis is as poised as the previous version’s, but now 47kg lighter than before.

There are very few cars in the world that feel this right. It almost seems as if Porsche’s engineers have distilled every lesson they’ve learned in their eight-decade-long history about making cracking drivers’ cars and put it all into the Cayman.

It’s so good, if it doesn’t make it on least one “best sports cars of the decade” list once 2020 rolls around, we’ll eat our collective hats. Now, if this sounds like too lofty praise to be levelled at one car, let’s just talk about how little the second-generation Cayman does wrong. 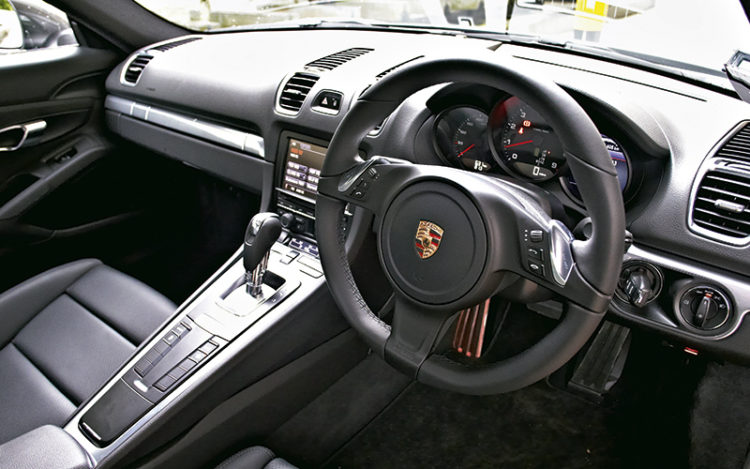 Cabin offers near-perfect driving position, and is better built than its predecessor.

Just about the only place where it falls flat is its expansive (and expensive) options list. Spanning five pages, it comprises items ranging from the glaringly obvious thanks to their absence, the frivolous, and the obligatory go-faster niceties.

For example, a rear wiper is an optional extra ($1405), or you could have the Porsche crest emblazoned on the central storage bin ($918). You could also pay $8231 for the Sport Chrono Package Plus, which among other things adds a stopwatch to the centre of the dashboard, drops its 0-100km/h time by several tenths of a second and gives regular paddle-shifters (left for downshifts, right for upshifts). Otherwise, you’ll have to deal with the rather wonky thumb-shifters, which you push forwards for upshifts and pull backwards for downshifts. 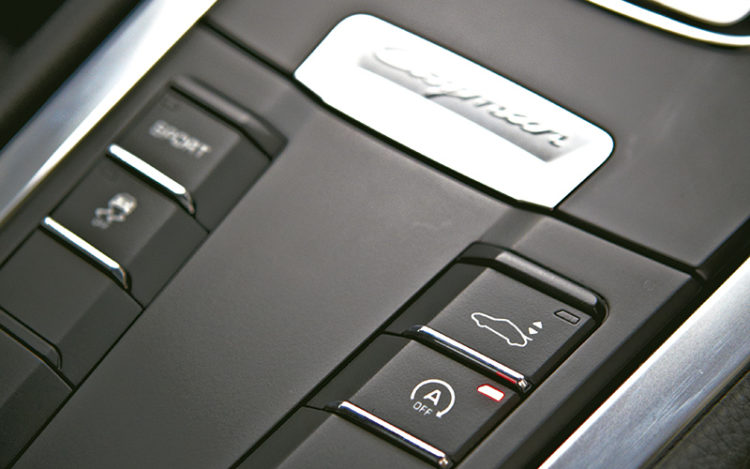 After you’ve navigated that particular minefield, and hopefully not pushed its price to something way on the wrong side of $300,000 (its base price is already $320,998), there’s a good chance you will, as we did, find it to be nigh-on perfect.

For starters, consider its driving position, which requires remarkably little adjustment before arriving at a perfect position. All-round visibility is fantastic, too. The cabin is light and airy, and because of the added dimensions (60mm longer wheelbase) of the new platform, there’s a little more shoulder room. Interior quality has also gone up over the previous model, which felt at times as if it was built to a budget (and it probably was). 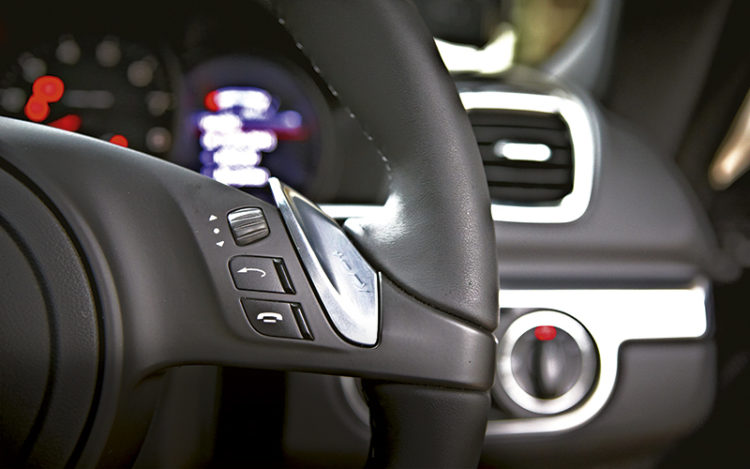 Standard ‘shifters are counter-intuitive – push for upshifts, pull for downshifts.

It’s a fantastic place to enjoy the razor-sharp handling, which, thanks to it being composed of some 44 per cent aluminium, is now 47kg lighter (body-in-white only). More than that, it’s also touting a 40 per cent increase in static torsional rigidity.

This means it turns all of apiece into corners, and because of the added stiffness, allows the suspension to be significantly more supple. Mid-corner bumps are soaked up with aplomb, and if you really want to get it out of shape, you’d really have to try (or do something quite stupid). 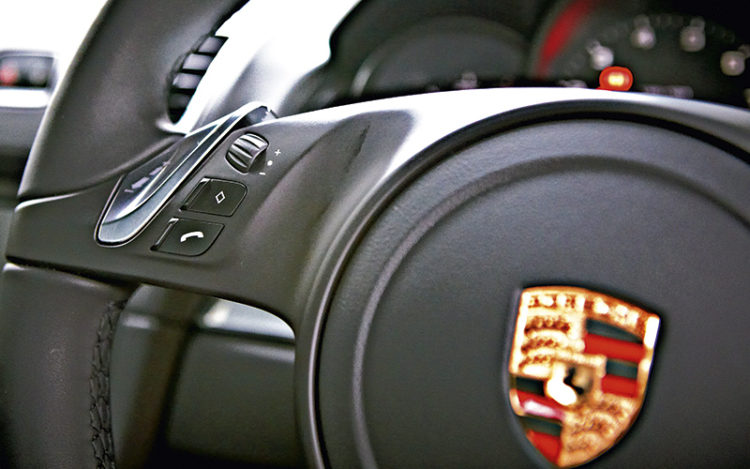 Black steering wheel inlays are standard, other materials are available but cost extra.

Purists will make much of the new Cayman’s move to an electric power steering setup (over its predecessor’s near-perfect hydraulic system) and corresponding loss of steering feel, but frankly, we think they’re off the mark.

That’s because considering its supposedly “less pure” system, which has such levels of accuracy, directness and finely judged heft, moaning about lack of feel seems a little… silly. 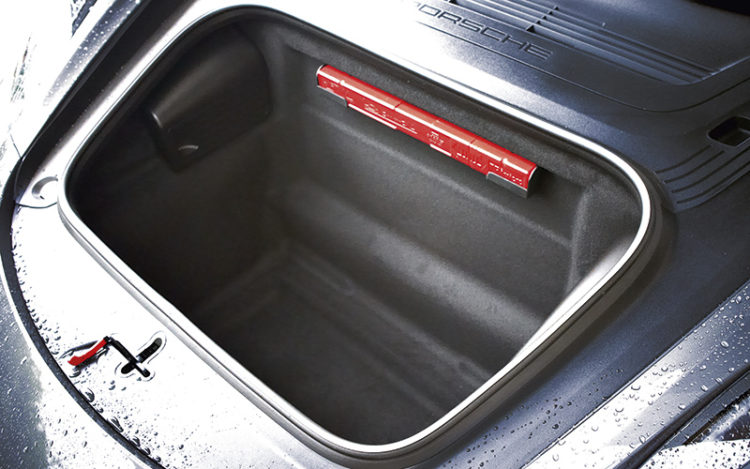 Surprisingly useful amount of space for a sports car, with 425L in the front and back.

Also, we must admit to a little fib earlier. There is one more gripe we have with the Cayman – its engine. The base model comes with a 275bhp, 2.7-litre flat-6, downsized from a 2.9-litre unit, although power is up 10bhp. Its century sprint time is 5.6 seconds, but it’s the 290Nm of torque (not too far off what you’d get in a regular turbocharged hatchback) that makes its performance brisk (at best).

Regardless, it’s a fabulous-sounding mill, and should you be willing to pay Porsche $8811 more for the sports exhaust, it’ll sound even better. Terrifyingly pricey options and slightly pokey engine aside, this truly is Porsche’s gift to keen drivers everywhere. 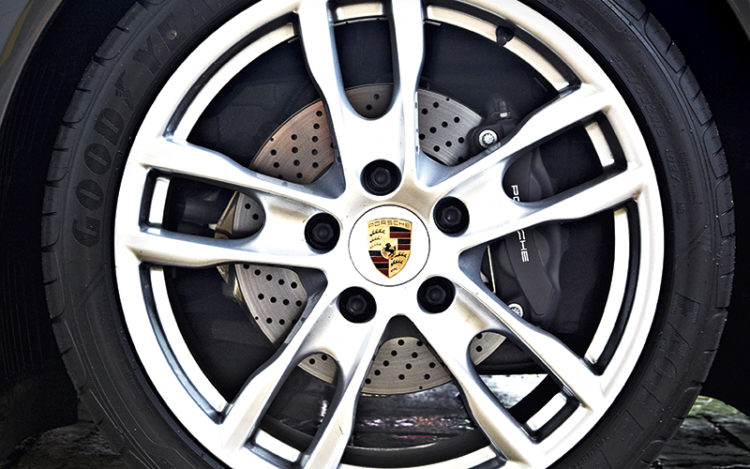 Those 19-inch wheels are optional, the standard car comes with 18-inch wheels.

Yes, if you haven’t gone to town with its options (as with our test car), it can feel a little sparse, but seriously, when you’re having that much fun behind the wheel and enjoying that sublime chassis, we think it’s really a moot point.

Plus, it’ll hold a surprisingly decent amount of luggage in the front and behind the driver (it’s a mid-engined car, remember?). Porsche claims a combined total of 425L “when loaded to the roof”. 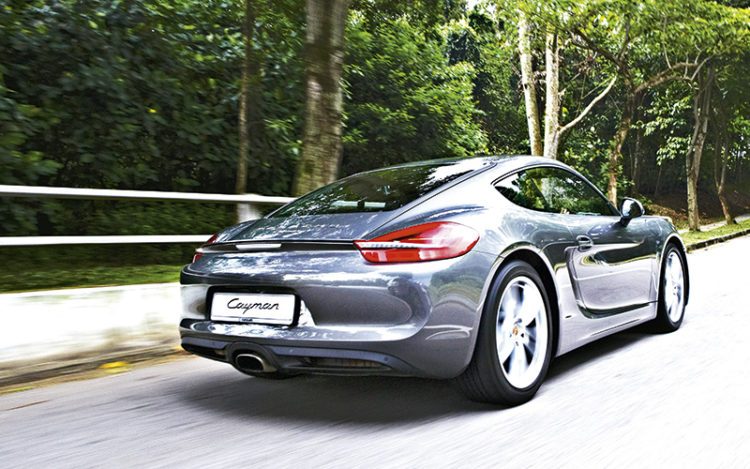 Like we said, there are very few cars in the world that feel this right.