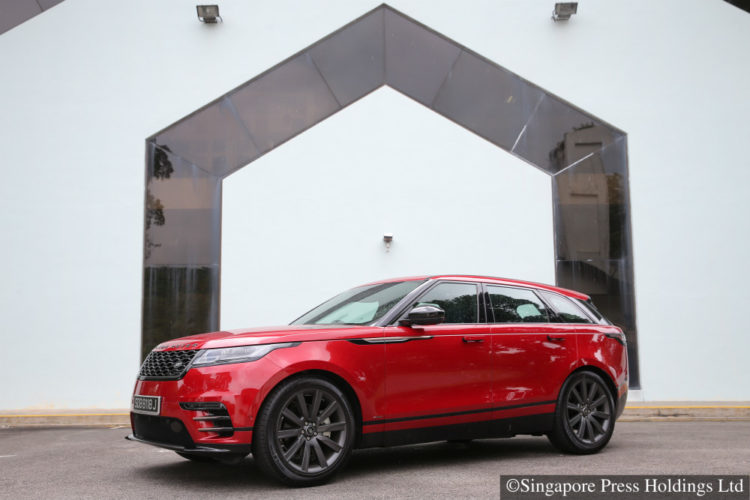 There are many notable qualities about the new Range Rover Velar, but being able to climb mountains is probably not one of them.

You see, the Velar, like its smaller Evoque sibling, is part of a new tarmac-tuned breed from Solihull. To the majority of owners in highly urbanised Singapore, that is actually a good thing.

The car is indeed quite adept on paved surfaces, but more on that later.

First, let us look at some of the things which make the Velar stand out. Its design is a good place to start. The car is all about clean, modern lines and flush surfaces. The only things which protrude are its wing mirrors and shark-fin antenna, which actually mar this polished capsule of a car.

The designers have even taken the pains to hide door handles, for goodness’ sake. Tap the keyless system and they extend from their recesses like switches for a nuclear strike.

Range Rover says the rather flimsy-looking mechanism has been tested in arctic conditions. If true, it is impressive. Because I’ve driven in Norway in a fairly robust Audi SQ7 and have often found its tailgate frozen shut after a long haul. Yes, the whole tailgate.

I am wondering if a simpler mechanical system would have been more trouble-free in the long run. But clearly, Range Rover is all about high-tech these days.

Step inside and you will see a cockpit that reinforces the car’s exterior theme.

Taking centre stage is a pair of 10-inch infotainment touchscreens. Yes, two 10-inch screens, one sitting atop the other.

The lower screen is rather futuristic. When not on, it looks like a glossy panel on the centre console. Fire up the car and it lights up like a gamer’s console.

At the same time, its panoramic glass roof screen retracts automatically. All quite dramatic, really. 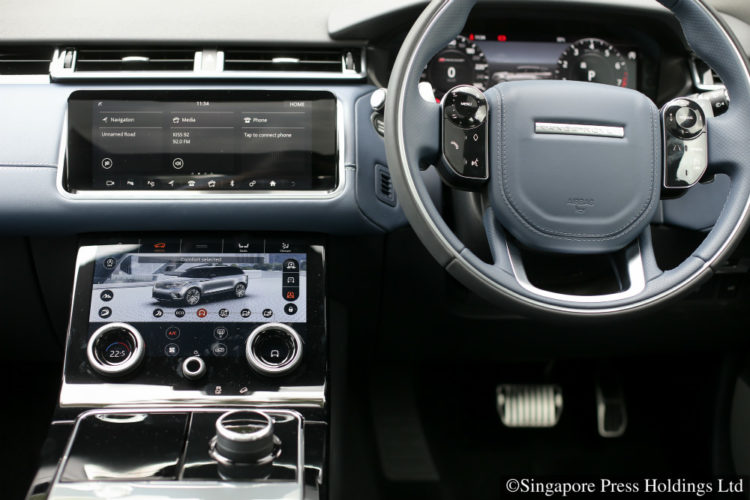 Expect refined moves from the Velar – an SUV with clean, modern lines. A pair of 10-inch infotainment touchscreens takes centre stage inside.

Its minimalistic approach to knobs and switches adds to its visual appeal. As does its array of touch-sensitive controls, including the ones on the steering wheel.

Unlike the gesture controls found in some new cars, the ones in the Velar allow the user to keep his hands on the wheel at all times.

Now, back to the way it drives. This Range Rover shares its platform with the Jaguar F-Pace. Its supercharged 3-litre engine and 8-speed gearbox are also found in the Jag SUV.

But it moves more gracefully than the F-Pace. Its refinement may be down to a more rigid body and a pretty advanced air suspension system. Cabin movements are noticeably better controlled than in the Jag.

And at the wheel, there is a higher level of driveability. You get the same throaty exhaust note as in the F-Pace (perhaps a mite more intense), but a better acoustic ambience when the car is in a relaxed cruise.

Size-wise, the Velar is closer to the big Range Rover Sport than the compact Evoque. It is, however, not a mountain goat like its family members. It does not have a separate transfer case for extra low gears.

But the car still has a decent wading depth of 650mm and it still has the marque’s famed Terrain Response (except now, you select the terrain via the touchscreen instead of a physical rotary switch).

And you continue to enjoy all-wheel traction, with an active locking rear differential and torque vectoring.

The car has a level of cornering confidence that might even surprise those who are used to driving sedans and hatchbacks.

It is also blessed with a standard of driveability and sporty performance surpassing a Porsche Cayenne’s. As many will agree, it is a far better looking car too.

It can, however, do without those fussy door handles.