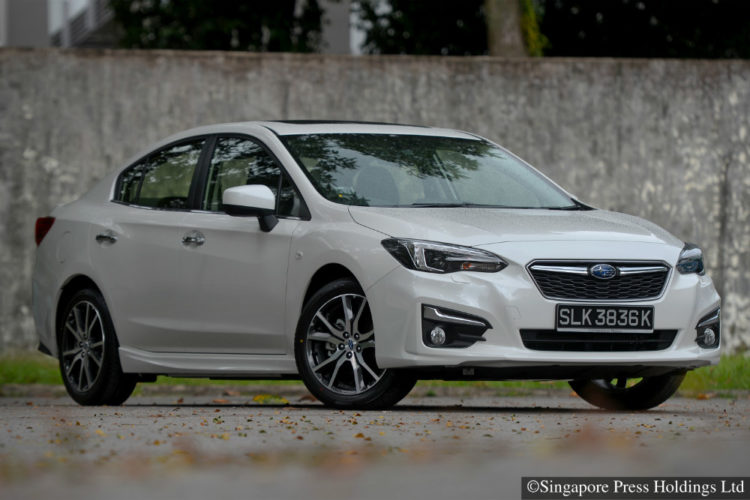 In this day and age, it is increasingly difficult for a car to stand out from the crowd. The crowd is a lot bigger and a lot more illustrious than before.

The new Subaru Impreza manages to do just that. The car is built on a completely new platform, which will spawn subsequent models.

Now, whenever a carmaker says that, it tends to pepper its spiel with adjectives such as “stiffer”, “stronger” and “lighter”. One nods politely and thinks, “Yeah, sure.”

Not Subaru, though. It lets the car do the talking. And whatever the smallish Japanese car manufacturer did with the new architecture, it works and is apparent from the moment one pulls out of the driveway.

The vehicle exudes a big-car feel with an extremely settled ride – sturdy yet comfy, with very little of the road coming through the floorboard.

It handles more confidently than before, which is saying a lot because the Impreza has never been shoddy in this respect. Its steering is more responsive, more linear and more communicative.

Overall refinement has improved significantly. Everything, from noise insulation and vibration level to materials and amenities, has gone up a notch.

In fact, it is such a huge improvement over the last Impreza that it would qualify as one model higher.

The car is 45mm longer, 35mm wider and 10mm lower. And its wheelbase has been extended by 25mm. It has gained 57kg as a result, but the increase is justifiable.

Even though the car’s measurements are similar to those of the Mazda 3’s, it feels more like the bigger Mazda 6 on the go.

And it is way better equipped than the 3. It has self-levelling LED headlamps (so they do not blind other road users), which turn with the steering wheel (to better illuminate corners), LED rear lights, UV- proof glass, automatic wipers, two 12-volt outlets, dual-zone auto air-conditioning with dust filter and voice control, a keyless system, electronic parking brakes and cruise control.

The cockpit has been totally revamped. In place of the dated and frumpy dash is a modern and ergonomic layout and tactile materials. An eight-inch infotainment monitor, with reverse camera, Bluetooth as well as Apple CarPlay and Android Auto, takes centre stage.

Even cooler is the multi-function screen atop the infotainment screen. This shows a myriad of car functions, including cornering forces, driving pattern and efficiency tracking. In default mode, it has a 3D rendition of the car, reflecting functions such as headlights and winkers.

The digital displays are elegantly projected – befitting the ambience of a car that could well have emerged from a German stable.

Styling-wise, the new Impreza is more sophisticated, statuesque and decidedly understated. It is handsome, but neither dashing nor flashy.

The only thing Subaru might have changed more dramatically is the car’s drivetrain. It has the same engine-gearbox combination as the previous-generation Impreza, although compression and gear ratios have been raised.

Peak torque is now attainable at a lower engine speed.

Combined with the body’s slightly lower drag coefficient, acceleration and efficiency have improved.

Even so, the Impreza is not what one would describe as quick. But its Boxer engine’s willingness to rev – and rev smoothly – masks this.

With its all-wheel-drive set-up and new chassis, the car still delivers plenty of fun and involvement.

Alas, the test car averaged 6.3km per litre – less than half of Subaru’s stated economy.

Clearly, the big-car feel comes with a price. That is the only chink in the new Impreza’s shiny new armour.