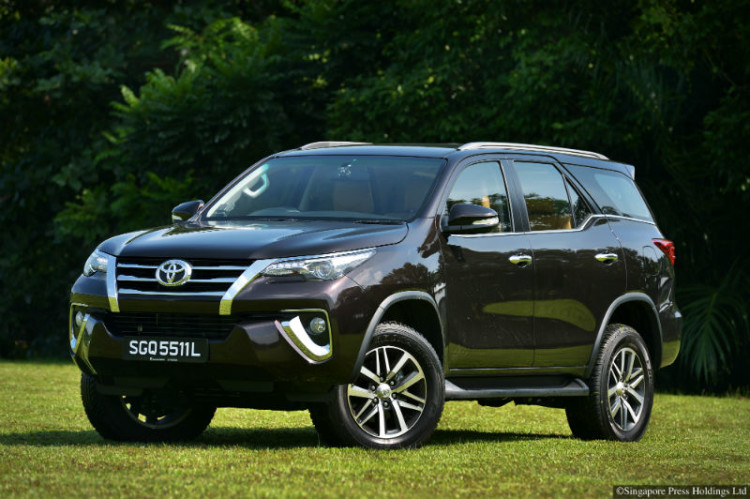 Forget about designer lines and driving lines. Sometimes, all people want is a big, functional family vehicle which they can drive everywhere.

The Toyota Fortuner is proof of that. The massive seven-seat SUV was first launched here in 2005. That first-generation car was so successful that Toyota did not see a need to replace it until now, 11 years later. And the new car looks set to do an encore.

Just look at it. There is nothing graceful, elegant or remotely sexy about it. But what it lacks in beauty, it makes up for in sheer size.

The new car is even bigger than the first one. It is longer, wider, taller and heavier. It is as if Toyota – the maker of fuel-sipping hybrids – did not get the global memo on downsizing.

This must be good news for those who prefer old-school SUVs. Other than the Mercedes-Benz G-class, the Fortuner is possibly the only old-school SUV available here.

You have to climb on board. Yes, the side step is not to make the car look more rugged. It is not decorative. Use it or risk splitting your tight pants getting in and out of the lofty cabin.

Once on board, you are immediately aware of how high up you are. For instance, you see the bald patch on the head of the driver in the Toyota Previa next to you.

And looking ahead, your view is unblocked unless there is a bus in the way.

Once you get moving, the Fortuner comes across more like a truck than a people mover. It has that unmistakable bounce which makers of modern SUVs have all but eliminated.

Its steering requires more turns than usual, making you wish at times that you had that knob which truck and forklift drivers fix on their steering wheel. 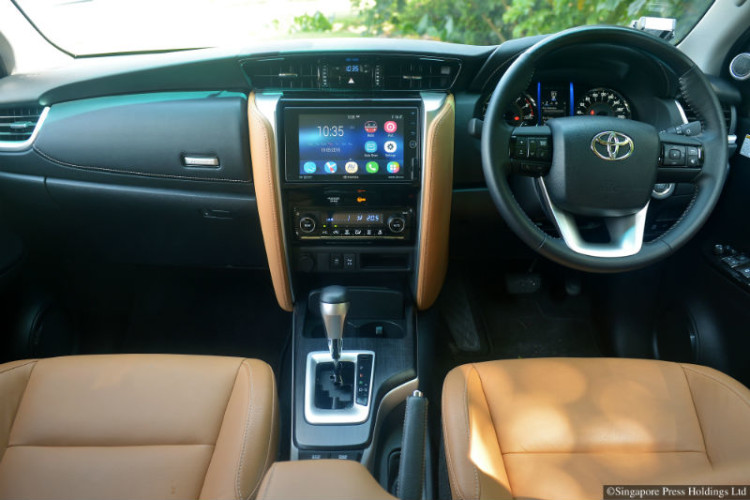 But compared with the G-class, the Fortuner is more civilised. Its superb insulation contributes to this perception too.

On the go, you would expect this made-for-Asean car to be short on refinement. But occupants are well shielded from outside noise.

Even the engine, which you often have to rev up to 5000rpm, does not sound too rough or intrusive.

Aesthetically, it is more polished than the first Fortuner too.

Its cabin quietness is marred, however, by seatbelt buckles which knock against the hard plastic lining the door pillars.

Other than that, the Fortuner’s interior is where you notice most of the improvements made over the last model. It has a more powerful air-conditioning system, with effective ceiling-mounted rear vents which bring cool air to even the last row.

A multi-function steering wheel lets you access the infotainment system with just your thumbs. Strangely, Toyota sees it fit to include shift paddles in this car, but not cruise control. Cruise control would have been much more useful.

The car now has a six-speed autobox instead of its predecessor’s four-speeder.

The cockpit is modern and well laid out, with effective application of stitched leather around the centre console. An 8-inch touchscreen infotainment monitor offers navigation, phone pairing and USB connectivity.

In terms of space for seven people, the car is not much roomier than the compact Toyota Wish MPV. This is because the seats are bigger and more generously padded. 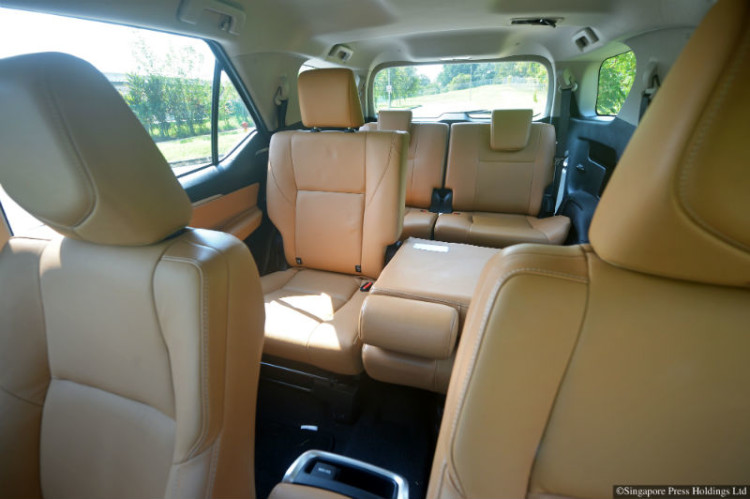 The boot area is also not much bigger. But as with most modern cars, the seats can be folded to create a huge flat space. Because of its height, the Fortuner’s motorised tailgate is especially useful.

Exterior-wise, the big Toyota is a little sleeker than before, but retains its overall silhouette. The most dramatic changes are the lights, which are now all LED.

This allows the headlamps to be ultra slim and Toyota to redesign the front section to be more contemporary.

The car is powered by the same 2.7-litre engine as before. It is tuned to produce a bit more power, but this is not enough to offset its weight gain of more than 100kg.

Hence the Fortuner is best driven in a leisurely frame of mind. Even the most unambitious overtaking manoeuvre requires revs to pile up to 4500rpm.

Despite its heft, the car averages 7.7km per litre, which is not too shoddy for a vehicle of its stature, and not too far from its declared 9.3km per litre figure.

The coolest thing about this SUV is the go-anywhere confidence it inspires. Sure, it is merely a rear-wheel-drive, but with a ground clearance that matches a Land Rover Defender’s, you feel like you can mount the tallest kerb with impunity. The kids will surely love the shenanigans.

For the driver, the superiority of being able to look down on someone behind the wheel of a Bentley Bentayga does not hurt either.