Brand-conscious folks who shun the Toyota nameplate because they feel the brand is old and boring should find cheer in the new Harrier.

The compact sport utility vehicle (SUV) from Toyota does not wear a Toyota badge. It has its own – a symbol of the predatory bird it was named after.

But what is so new about the Harrier? After all, the car has been available in Singapore for nearly 15 years through parallel importers.

For starters, this is a turbocharged version, powered by a 2-litre 227bhp/350Nm engine found in the Lexus NX (but slightly detuned). This makes the parallel-import version – powered by a rather dated 2-litre 149bhp/193Nm engine – seem, ahem, old and boring.

It was introduced last week, concurrently with a launch in Japan. So, it is hot off the shelf – a coup for authorised agent Borneo Motors, which has been lobbying for the Harrier to be included in its line-up for as long as we can remember.

With this car, Borneo Motors is likely to win back sales lost to the parallel importers. This is not insignificant, since the Harrier has long been one of the most popular parallel-import models here.

But the Harrier’s imminent success may come at the expense of the Toyota RAV4, which shares its platform. Merely $2000 costlier than the RAV4 (starting price), the newer and sexier Harrier is a no-brainer for those looking for a reliable compact SUV.

To be sure, the current RAV4 is a well-built and well-equipped car with a better fit and finish than any of its predecessors. Despite that, it is not among Borneo’s top sellers. Hence the arrival of the turbo Harrier may well seal its fate.

The Harrier is more attractive in every way. To begin with, the new car has a sportier design. On the road, it resembles the Lexus NX (another car which shares its platform) more than it does the RAV4. 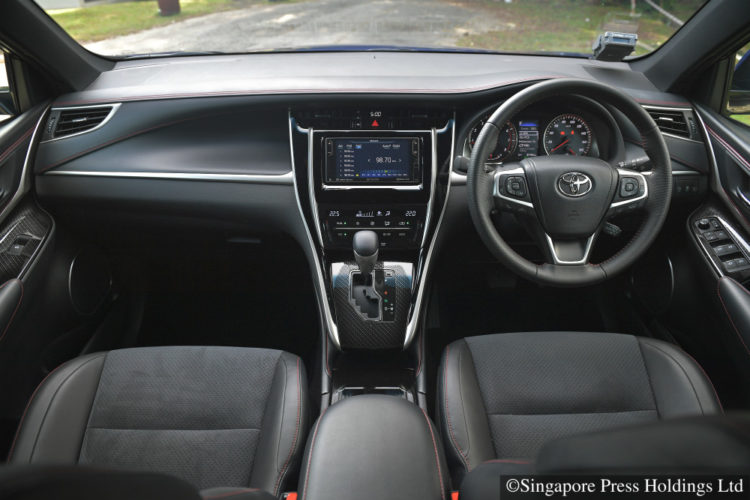 While the RAV4 stays true to the traditional SUV mould, the wedge-shaped Harrier looks bold and futuristic.

At the wheel, however, it feels more like the RAV4 than the Lexus NX. Its ride is soft and springy, with body movements that are noticeable but tolerable. You would not mistake the car for anything but an SUV.

Yet, it has qualities that make it a suitable urban cruiser. Its compactness makes it agile and manoeuvrable. And the generous low-end torque from its turbo engine makes it responsive to the demands of stop-start commuting.

The car is also very refined. Other than items rattling in its unlined cubby holes, there is barely any intrusion from the road. On this front, it is close to what the NX offers.

And, of course, there is its ample power. With 227bhp and 350Nm of torque available from 1650rpm, the Harrier is suitable for journeys in a built-up and aggressive landscape such as ours.

The car’s throttle response is flawlessly linear and always dependable. The engine revs freely with little prompting. Overtaking and filling in gaps in traffic are stress-free in a car like this.

An almost flat floor in the rear makes seating three more feasible than in some other cars.

In fact, it makes the versions offered by parallel importers seem lame.