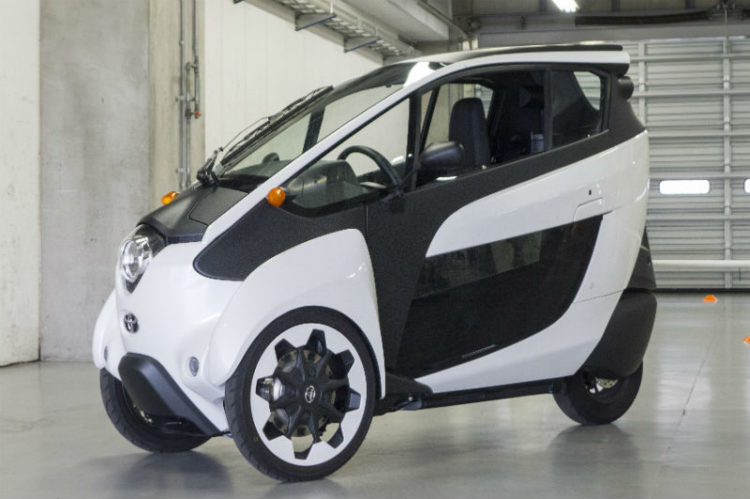 The electric i-Road reminds me of two other atypical Toyotas I have driven in the past.

One was the iQ, a 996cc runabout that tries to be smarter than Daimler’s Smart two-seater in terms of packaging.

The other was a forklift.

Like the iQ, the i-Road could qualify as a cartoon from the pages of a manga comic book. And like the Toyota forklift I took for a spin years ago, the i-Road has three wheels – two in front and one at the back.

But this little Toyota is much closer to being a car than a warehouse industrial vehicle or one of those peculiar three-wheeled scooters.

It has a completely enclosed cabin, with a pair of doors plus front and rear windscreens made of a resin- like material.

Those doors have proper handles on the outside and regular openers on the inside, but you grab a strap or window sill to shut the door. To close the plastic window, you pull it up and secure it to the top of the door frame with magnetic clips.

It feels flimsy and small. But my 1.73m body frame can enter and exit the i-Road without difficulty. I can also fit easily behind the wheel, and the narrow, thinly padded seat (with fore-aft adjustment) is less uncomfortable than it appears.

Behind the seat is a storage area with a cargo net and enough space for two or three school backpacks. In export markets, the vehicle will be able to accommodate a lower-primary school kid. 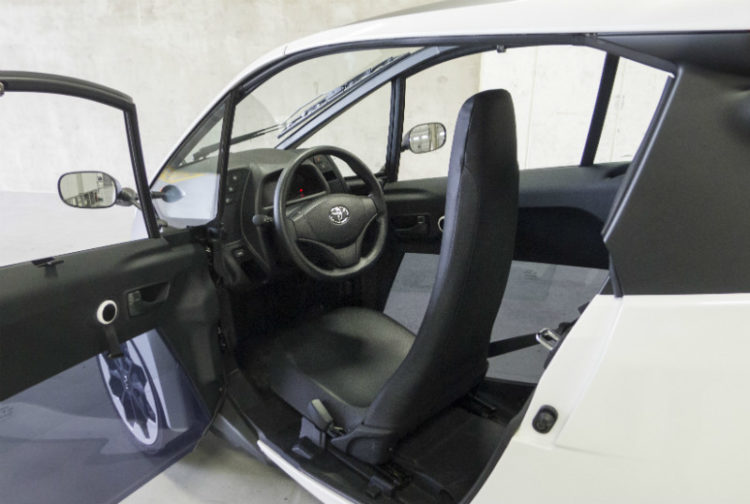 The fixed steering wheel looks vaguely familiar, like it came from an old Yaris or Vios. It does not have an airbag, but you get a three-point seatbelt. There is neither an air-conditioner nor a blower fan, so you need to keep the side windows down to get ventilation.

Its dashboard has only five buttons – three on the left for the electric drive mode (R for reverse, N for neutral and D for drive) and two on the right for the hazard lights and windscreen demister.

A single stalk on the left operates the lights and two-speed wiper. And there is a USB port to charge your iPhone in the i-Road.

The instrument panel is equally straightforward, with a digital display showing the drive mode, vehicle speed, state of charge of the lithium-ion battery and an odometer.

Frontal and lateral visibility are excellent. It is so simple to hit the road in the i-Road that I feel overqualified as a holder of a Class 3 licence. Arcade game “driving experience” might suffice in this case.

Twist the key in the ignition slot, step on the brake pedal, press the D button, release the foot-operated parking brake and the machine is ready to scoot. And off it goes, like a gigantic radio-controlled toy car, with two tiny electric motors whirring softly and driving the skinny 16-inch front wheels.

The acceleration to 25km/h or so is instant and the smile on my face is constant. The deceleration is immediate too, not only when I tap the brake pedal but also when I lift my foot from the accelerator pedal.

My smile becomes wider as I drive the i-Road on a tight, clockwise circuit. With its 10-inch rear wheel doing the steering, the way the oddball changes direction is more like a twirl than a turn.

Adding whirl to the twirl is an Active Lean System, a clever yoke mechanism that makes the i-Road lean in the same direction it is steered. The same system also enables the vehicle to remain level when parked on uneven ground.

The combination of Active Lean, rear-wheel-steer, prompt electric propulsion and a kart-size footprint provides a bundle of unusual fun.

The fun lasts for up to 50km (the claimed range on a fully charged battery, at a steady speed of 30km/h). And the car can hit 60km/h.

According to Toyota, the typical range in stop-go city traffic is 30 to 40km and recharging from a standard household power point takes about three hours.

The i-Road is at the prototype- testing stage. I hope it makes it to production.