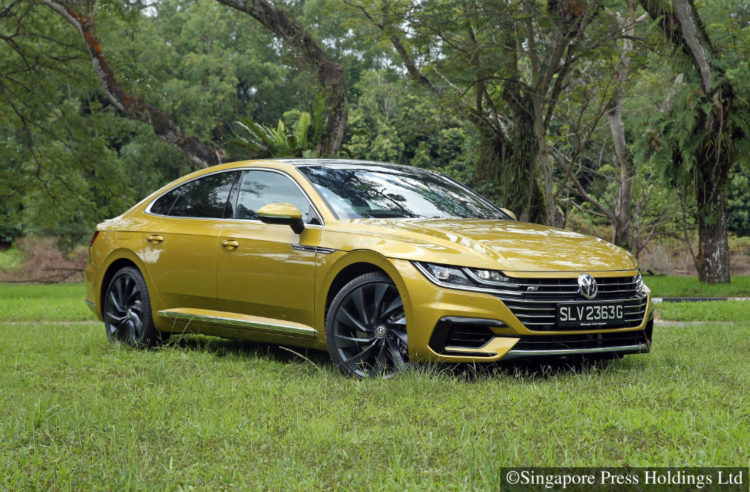 Volkswagen certainly has a knack for picking grand-sounding names for its cars. Notable ones include the Touareg, Scirocco and Phaeton.

Its latest Arteon, however, takes the cake. It combines the word “art” (Volkswagen believes it has created a design masterpiece) and “eon” (which has links to its Chinese luxury model Phileon).

The new car rivals only the Tiguan, a compact crossover which derives its name from “tiger” and “iguana”.

Looking at the Arteon, it is obvious Volkswagen has tried hard to make the grand tourer stand out. Perhaps, a little too hard.

The car has the general outline of an Audi A5 Sportback, but is noticeably bigger. It is a busy design, with more lines and creases on its body than an origami creation. A huge radiator grille, with multiple lateral lines spanning nearly the whole frontal section, adds more lines.

Then, as if the bonnet is not quite complete, designers have added an extra strip atop the grille to give the impression of a bonnet cascading downwards. It doesn’t work.

The rear is more elegant, with the car’s shoulder lines joining slim tail-lamps to hint of aerodynamism. They should have stopped there.

Sitting just above the nicely crafted tail-lamp ensemble is a barely there spoiler that appears to be as much of an afterthought as the bonnet “lip”. 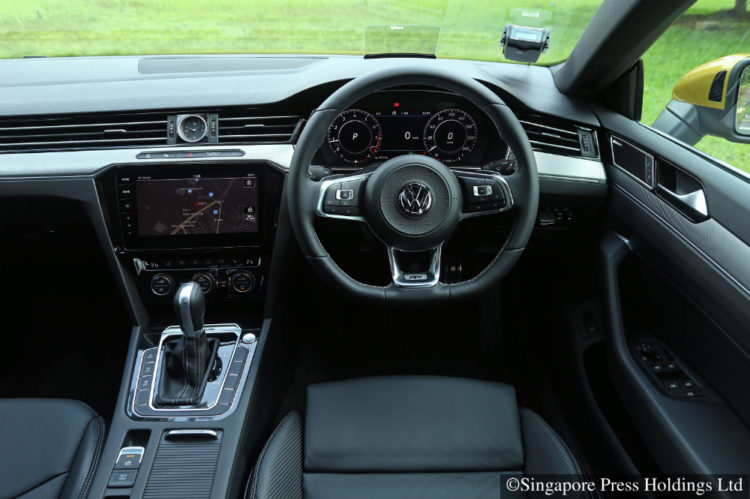 But if you take in the car in its entirety, it is surprisingly inoffensive. In fact, it is quite comely, especially at a distance and in the gold-like Kurkuma Yellow Metallic paintwork worn by the test-car. (See what we mean by grand-sounding names?)

Inside, the Arteon impresses firstly with its roominess. Rear legroom is more than decent and headroom is astounding for a car with rakish A and C pillars. The boot is cavernous. Flip open the motorised “kick action” fastback tailgate and you will find a 563-litre golf bag-swallowing compartment – the biggest in its segment.

The cockpit is replete with trim and features found in a premium model, such as a 9.2-inch infotainment touchscreen with gesture control, simulated carbon-fibre panels, and air-conditioner vents spanning the entire width of the dash – something found also in the new Audi Q7.

On the go, the all-wheel-drive Arteon is a little lethargic if driven leisurely. Its less-than-responsive stop-start mechanism adds to this impression.

Drive it with a heavy foot or in sport mode and the car transforms into something else altogether. Even if it does not seem as quick as its declared 5.6-second century sprint, it usually has no trouble leaving the pack in the dust.

When cruising, the Arteon betrays a turbulent acoustic hum in the cabin – a trait found in some cars a couple of decades ago. Its size makes it a little unwieldy in tight spaces. But thankfully, it is blessed with sharp steering. Ride quality is a tad above average, but nothing to write home about. Its handling prowess, however, is.

Still, the car does not leave a strong impression on the whole. For a car which is both a Volkswagen Comfort Coupe replacement and a new flagship (now that the Phaeton is gone), it thus falls a little short on this front.

In which case, a grand-sounding name helps.