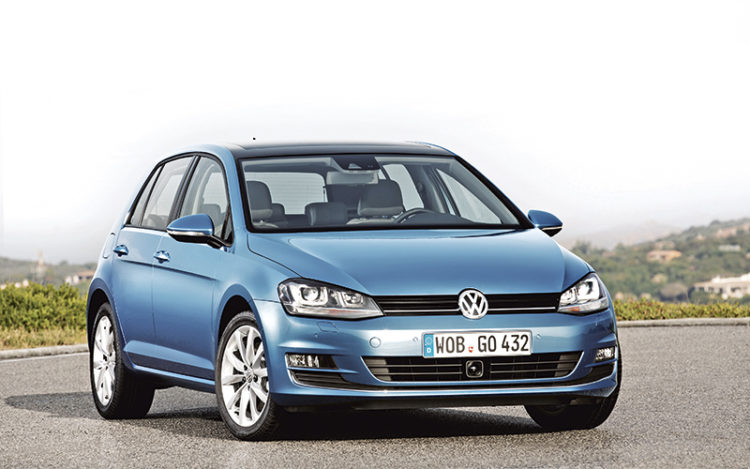 The VW Golf is like the sliced bread of the international hatchback buffet. You could have it plain white (basic trim with base engine), wholemeal (thrifty turbo-diesel and eco-conscious BlueMotion) or toasted (lightly as the GTI or heavily as the R). Across six model generations, the Golf has always been the archetypal bread-and-butter continental car.

The seventh serving of this German automotive pastry is tastier than ever, thanks to new-age “dough” (the MQB chassis), delectable high-tech ingredients and Volkswagen’s hatchback baking skills. 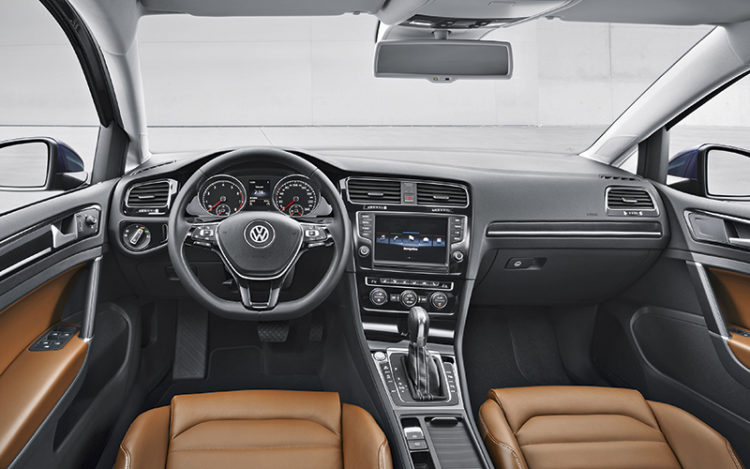 The Golf exterior, once again, combines modernity with familiarity, attracting potential customers without alienating current owners who drive the earlier Mks. According to Volkswagen’s chief designer, Klaus Bischoff, “It comes across as simple, understandable and reliable.” Indeed, there is nothing voguish or outlandish about the styling – it’s just neat, solid, and likely to wear well as time and trends go by.

About the only flashy touches are the chrome bars that underscore the radiator grille, headlights and front bumper, and the “swoopy” fuel cap that matches the cutlines flanking the rear right fender. A refreshingly retrospective touch is the “drawn bow arc” C-pillar, which pays homage to the 1974 Mk 1 and 1997 Mk 4 models. More than ever and in more ways than one, it’s a pillar of the Golf design construct. 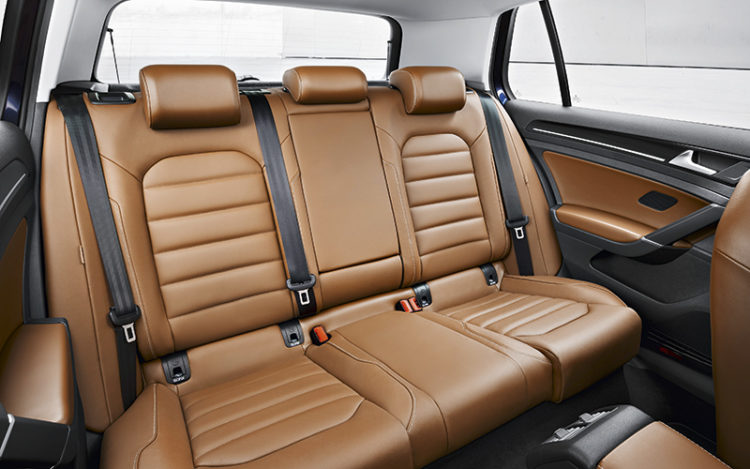 Marginally more space in the well-made cabin for up to five occupants, who will sit comfortably.

In terms of dimensions, the car is now slightly longer, lower and broader, with a 2637mm wheelbase that is just a bit shorter than the Jetta saloon’s. The aerodynamics also sees an improvement, with about 10 per cent less drag than the predecessor. Most importantly, the Golf has shed some 100kg, which is equivalent to “ditching” an adult passenger and his one-week holiday luggage. That’s one less potential back seat driver, and more petrol saved in the tank.

Contributing to the useful weight reduction are the bodyshell (minus 23kg), seats (minus 7kg), electricals (minus 6kg), rear multi-link suspension (minus 4kg), air-con system (minus 2.7kg) and even the instrument panel (minus 400g). Of course, the superstructure slim-down was done while satisfying stringent crash safety standards and meeting the usual body rigidity requirements. This “plus-minus” formula also enabled the dashboard to be 20 percent lighter, thanks to a new thermoplastic foam injection process, and yet 20 percent stiffer at the same time. Newly introduced standard features include seven airbags (the seventh protecting the driver’s knees in an accident), an electronic parking brake (which liberates some console space) with Auto Hold function, auto stop/start for every engine, a tyre pressure monitor, a comprehensive trip computer and a versatile dual-deck boot floor with stowable parcel shelf. High-quality cabin materials are standard, too, although the assorted plastics around the door grab are too obvious for comfort in the light-coloured interior. 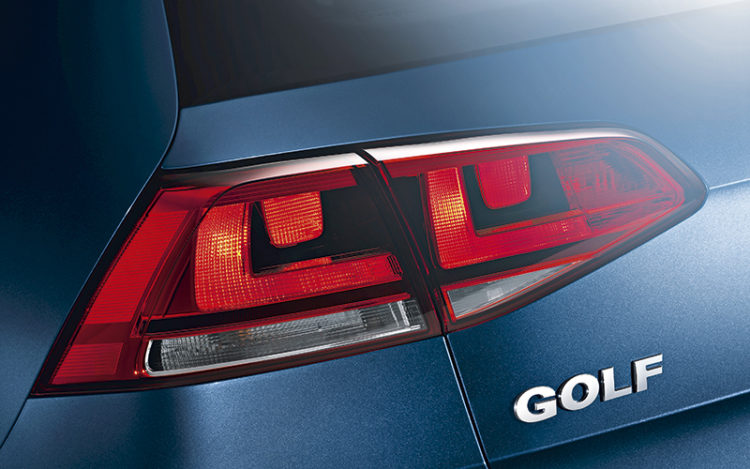 The basic infotainment package is a 5-inch black-and-white touchscreen. It can be upgraded to a colour screen, complete with MP3 CD drive and SD memory card slot. The mid-range system has a bigger 5.8-inch touchscreen that responds to finger gestures popularised by iPhones (e.g. swipe and pinch) and is equipped with eight loudspeakers, Bluetooth and USB connections, DAB radio reception, plus optional satellite navigation. The most advanced infotainment package for the Golf boasts an 8-inch capacitive touchscreen with DVD player, 64GB flash drive, pre-loaded GPS navigation with 3-D graphics, handsfree voice activation and on-board Wi-Fi hotspot hosting.

Factory-fitted options include keyless access with push-button ignition, “Vienna” leather upholstery, a panoramic sunroof, adaptive antenna coupling for a smartphone, Park Assist 2.0 (automated “valet” parking for both parallel and perpendicular spaces) and a sport chassis (that lowers the ride height by 15mm). There is an initial choice of six alloy wheel designs, all named after cities – the 16-inch “Toronto” and “Perth”, 17-inch “Geneva” and “Madrid”, and 18-inch “Dijon” and “Durban”. Interestingly, Volkswagen later added another 17-inch set called “Singapore”. 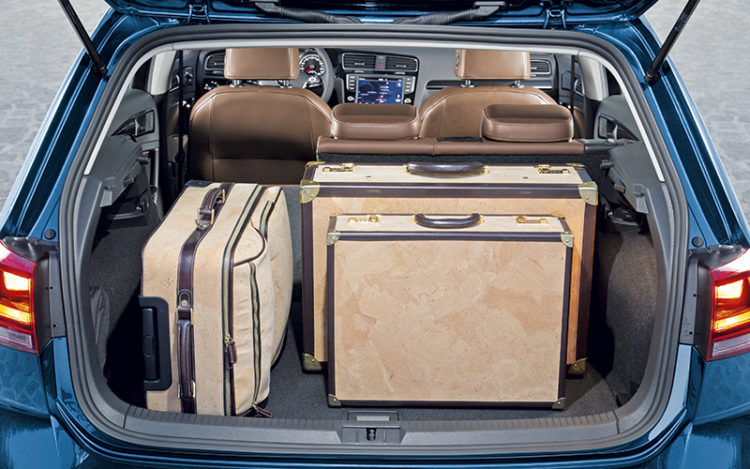 Cargo capacity has expanded by 30L to 380L, while the boot shape and access have improved.

Those wheels can be hooked up to DCC (Dynamic Chassis Control), an adaptive suspension system now in its second version making its market debut on the Golf 7. It drops the ride height by 10mm and comes with optimised tuning of the springs, dampers and anti-roll bars. In the DCC hardware department, the accelerometers were converted from three-line analogue to two-line digital (for more precise measurement of body movements and hence more accuracy in the suspension’s “adaptiveness”), and powerful 180MHz processors are used to ensure fast data crunching in one-millisecond cycles.

The DCC system still has three different settings for the dampers (Comfort, Normal and Sport), but they have been extended to include an Individual mode that allows the driver to tweak the damping force, steering weight and throttle response to his liking – similar to Audi’s drive select. Even the name of the Golf system, Driving Profile Selection, sounds like a variation of “drive select”. There’s a flip side to the revised DCC, however – its extra capabilities mean that changing or confirming the mode is no longer the foolproof one-button, press-and-play process that current DCC users are accustomed too. 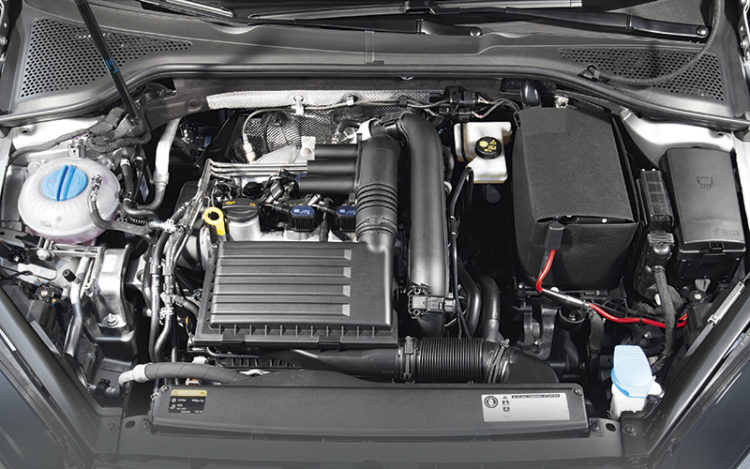 They also must get used to the various driving aids available for the new Golf, most of which would have been reserved for the deluxe segment just a few years ago. The extra-cost goodies include radar-based Adaptive Cruise Control (operational between 30km/h and 160km/h, and able to stop-and-go in combination with the automatic gearbox), camera-guided Lane Assist (with gentle steering intervention when deemed necessary), road sign recognition (which utilises the Lane Assist camera to identify speed limits and no-overtaking zones, and reminds the driver accordingly through the in-dash display), collision-mitigating Front Assist (which alerts the driver, applies increased braking pressure on his behalf and eventually initiates self-braking if a rear-ender is imminent), and City Emergency Braking (an autonomous add-on to Front Assist that stops the car hard to avoid a shunt at speeds below 30km/h).

Another nifty driving aid is Multi-collision Brake, a new-to-VW standard-fit system that reduces the risk of a secondary impact after a crash from behind by slowing the Golf down to 10km/h. Working with the driver to avoid that accident in the first place are anti-lock disc brakes, the XDS electronic differential lock (which quells understeer) and ESP (electronic stability programme). 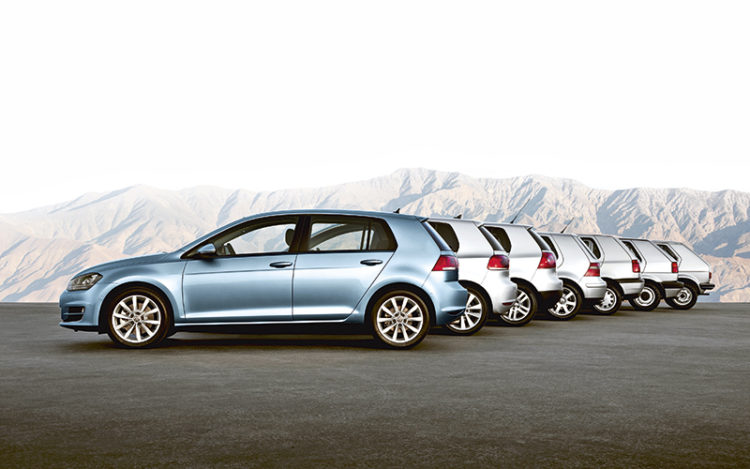 The Golf Mk 7 is the latest in a hugely successful line of general-purpose German hatches that dates back 38 years.

Then, there is drowsiness detection based on the driver’s steering input. If a lapse in concentration is suspected, the system issues a visual-and-acoustic warning to “wake up” the supposedly drowsy driver. But feeling tired or jaded while driving the Golf Mk 7 is unlikely, because it is a comfy car that gives a delightful drive. This hatchback also provides enough cabin space for four Asian adults (if you want more-than-enough interior room, wait for the next Jetta), who can stash their baggage and whatnot in the wider and 30L-larger boot.

The driver’s seat is relaxing when cruising on an expressway, yet adequately supportive when tackling a Sardinian switchback, while the driving position is perfect for a day-to-day hatchback and the outward visibility is great. The upholstery is “breathable” and attractive, be it in cowhide or cloth. 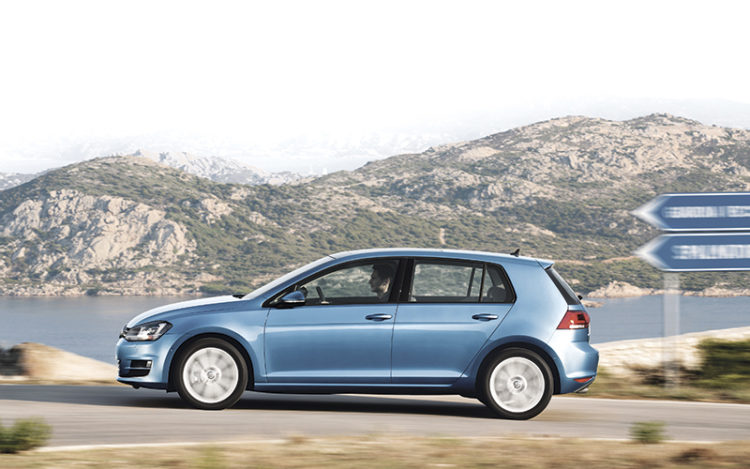 Almost as quick as the defunct Twincharged 160bhp Golf Sport, but less thirsty and more nippy.

Every driving-related control, from the pedals underfoot to the handy paddles and from the steering wheel to the switchgear, feels positive. Some parts feel downright expensive, such as the indicator stalks, which work so elegantly and “tick-tock” so gently that they would be right at home in a Phaeton limousine costing much more.

Classy, too, is the driving experience. It has been made so refined and so effortless that the Golf is now closer than ever to being the Rolls-Royce of everyday hatchbacks. It rides quietly, even on sporty low-profile tyres and over spotty countryside tarmac, and wind noise is never an issue, even at well above 120km/h. 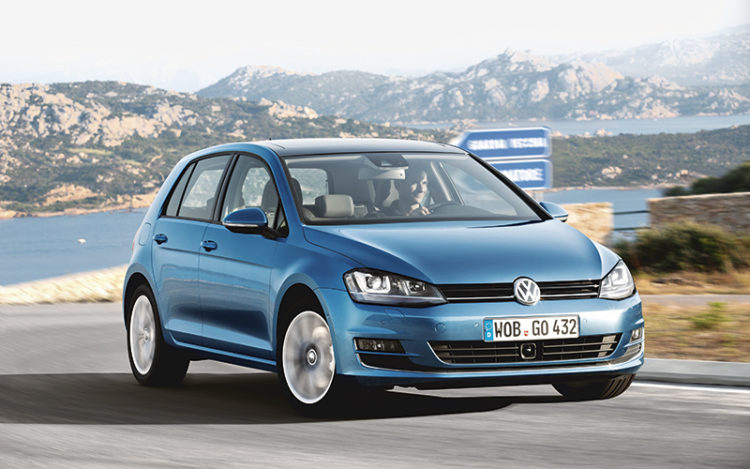 The Golf is now closer than ever to being the Rolls-Royce of everyday hatchbacks.

Cruising for hours on end would be a pleasure for passengers in this car, and it’s feasible with a theoretical range of 1,000 kilometres in the 1.4-litre TSI Golf. Squeezing some more mileage out of the same engine is Active Cylinder Management (Volkswagen calls it ACT when ACM would have been more logical), which temporarily deactivates two of the four cylinders whenever possible (1400-4000rpm to be exact) on the go, without affecting driveability or mechanical refinement – the driver won’t notice anything “amiss” with the transient 2-cylinder operation. ACT helps the Golf travel over 1.2km further on every litre of petrol. Without ACT, the Golf 1.4 can already do 20km per litre on average, which is even more economical than the smaller and more spartan Polo 1.2 supermini, which returns nearly 19 kilometres per litre.

The 1.4L turbo unit with ACT will be the key powerplant for the Golf in Singapore. It produces a healthy 140bhp and 250Nm, put through a 7-speed dual-clutch DSG that has had its past hiccups cured, it seems. It doesn’t hesitate or stumble anymore when “creeping” in traffic or in a carpark, and its gearchanges are even slicker now, particularly when downshifting. 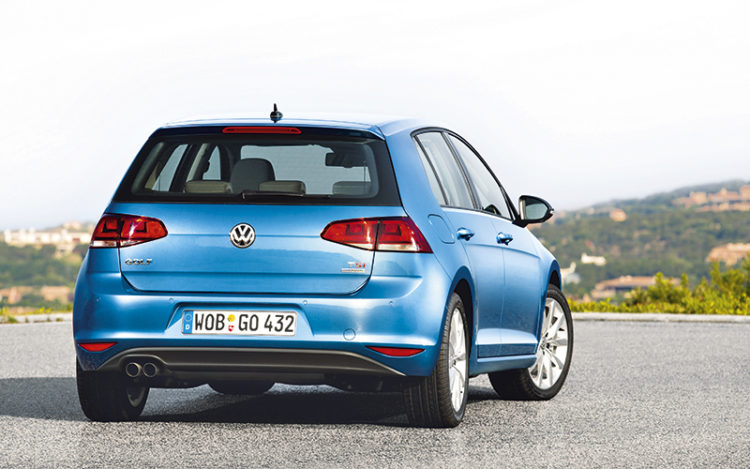 Volkswagen’s most important “wagon” is the Golf, a perennial bestseller for the giant automaker.

Similarly slick, and therefore not too irritating, is the auto stop/start that boosts fuel economy by about four per cent. Also saving fuel at every opportunity is the DSG’s coasting function in the car’s Eco driving mode – this disengages the transmission and lets the engine idle whenever the accelerator pedal is released, employing the vehicle’s kinetic energy instead to continue rolling along.

With the gearbox engaged and the engine in full swing, there is plenty of accessible performance on tap. The soundtrack is more workaday hatch than warm hatch, but the 1.4-litre pulls strongly across the entire rev range, with no flat spots anywhere, and it operates smoothly all the way. 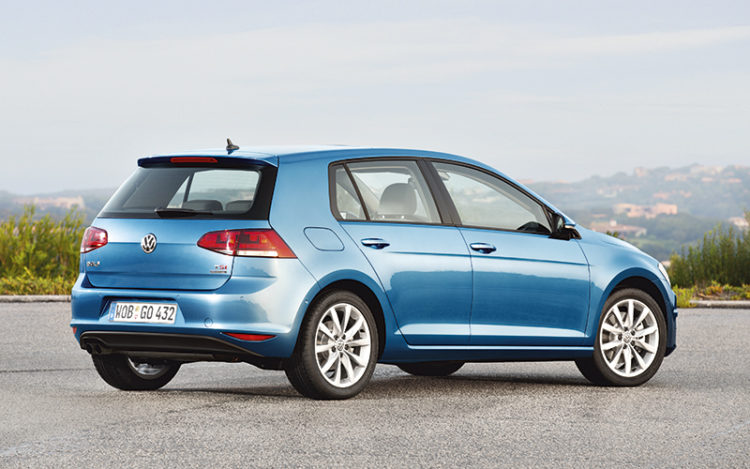 On the handling front, the turn-in feels a little sharper than before (probably due to the car’s lower weight and slightly higher-geared steering), there is ample grip when entering and exiting a corner, and the overall body control is steady. Nothing exciting, admittedly, but this new game on the Golf course is no doubt enjoyable exercise for the keen player.

All in all, it’s another good round of Golf from Volkswagen – for the seventh time.