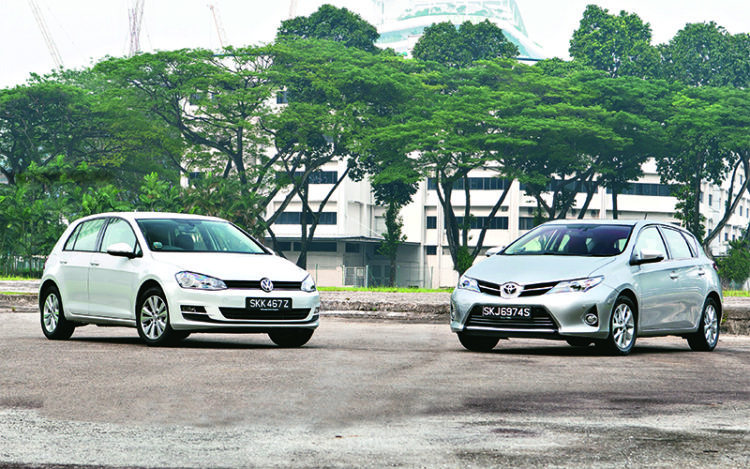 Mention “European hatchback”, and the first thing that will probably come to mind is the Volkswagen Golf. The keys to this model’s success are its good practicality, effective yet economical powertrain, and German quality standards.

The Golf’s rivals have traditionally been European, too, such as the Opel Astra, Citroen C4 and Peugeot 308. Now, the Golf has a fresh competitor that is Japanese but also “continental” in a sense – it’s the UK-built Toyota Auris, which is also the first Toyota model here that doesn’t hail from Japan or Thailand. 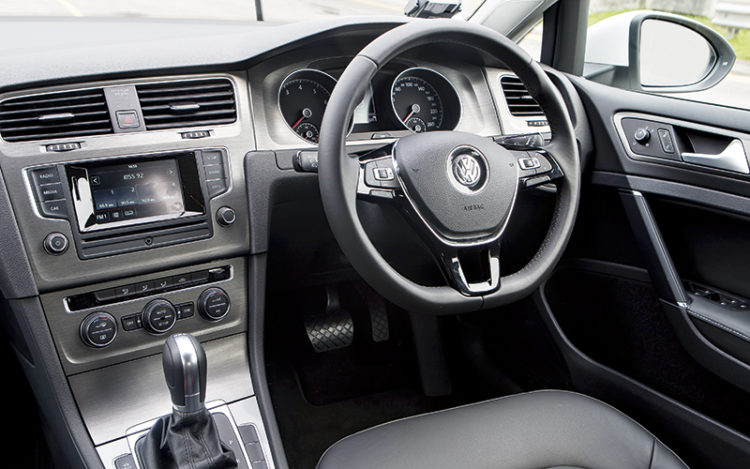 Volkswagen Golf cabin is better made than the Auris’ and has significantly roomier storage points, too.

Designed in Europe, the Auris is easily the most dynamic-looking model in Toyota’s local lineup, apart from the 86 coupe. From the Auris’ aggressive front end to the “creased” bonnet and sculpted tail-lights, it’s obvious that this hatchback is meant to attract younger, more “fashionable” drivers.

The Golf’s styling, in contrast, is clean and understated, with no fanciful lines. Clearly, the design of the current Mk 7 model has been evolved from that of the Mk 6 model, but it’s nevertheless a handsome hatch. From certain angles, it looks more compact than the Auris, but the Golf is actually larger all around. 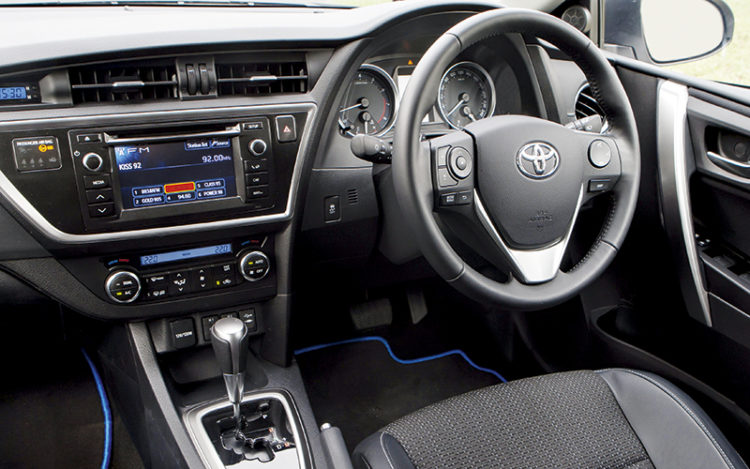 Not surprisingly, then, the Golf is roomier than its rival and has an interior whose layout is as neat as the exterior. The Golf’s build quality, too, seems to be higher than the Auris’ – the doors feel more solid when shut and the cockpit has plenty of soft-touch surfaces.

Now, while the Auris’ plastics feel harder, it makes up for this by having a leather-trimmed dashboard and better amenities compared to the Golf. Convenient standard features in the Toyota include keyless entry and ignition, as well as a park assist system to help with parallel-parking manoeuvres (the VW can be specified with an automated parking system for an extra $1900). As a bonus, the Auris’ steering-wheel controls are bigger and more intuitive than the Golf’s. 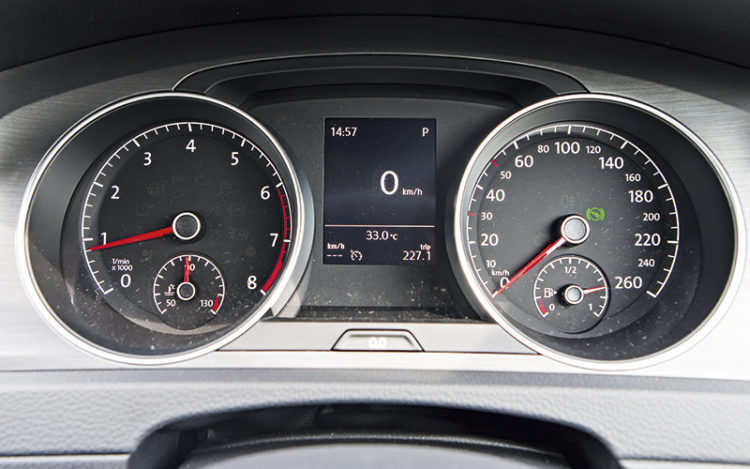 Infotainment-wise, the Golf’s display might be clearer and crisper than the Auris’, but the latter’s touchscreen is more responsive and has bolder colours. The Auris also offers Bluetooth connectivity and a USB port, both of which are missing from the Golf. Surprisingly, the Auris’ air-conditioning system doesn’t produce the “arctic” conditions you’d expect in a Toyota, which is probably because said car was originally meant for temperate rather than tropical climes.

When it comes to rear-seat accommodation, it’s the Golf that has the edge. Headroom in the VW is more generous, while the 2637mm wheelbase, which is 37mm longer than the Auris’, also liberates greater legroom. The Auris, however, claws back points with its broader backrest and flat rear floor, which make it more ideal for ferrying three adults behind. The Golf’s sizeable floorboard protrusion makes it less comfortable for a third passenger seated in the rear. 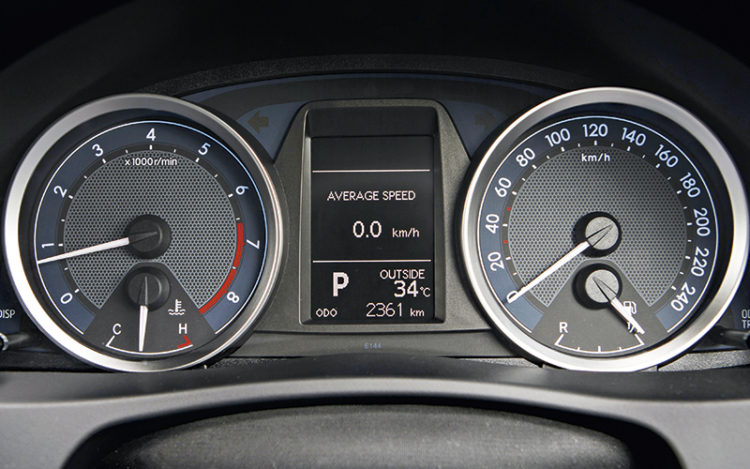 These practical runabouts are equipped with 60/40 split-folding rear seats that can be used to free up even more boot space. The Golf’s seatbacks are heavier than the Auris’, though, and require more effort to pull back up, but they have a nifty pass-through capability for longer items.

The Golf’s 380-litre boot is 20 litres larger than the Auris’, and its clever packaging allows the parcel shelf to be stowed within. But the Auris’ boot loading height is lower (and thus more convenient), while its underfloor storage is more generous than the Golf’s. 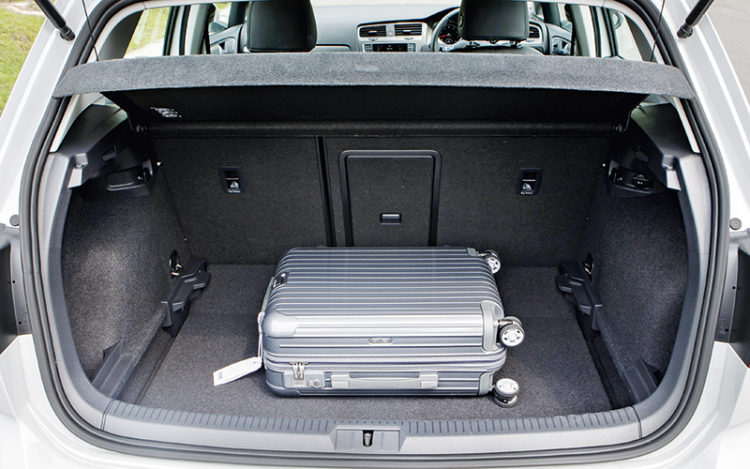 Volkswagen Golf’s parcel shelf can be neatly stowed in the boot.

In terms of performance, it’s the Golf that delivers more “go” despite its smaller 1.4-litre engine. Thanks to turbocharging, peak torque is rated at 200Nm – a useful 40Nm more than what the Auris’ 1.6-litre, naturally aspirated engine can produce. Complementing this is the Volkswagen’s smooth 7-speed dual-clutch transmission, whose rapid-fire gearchanges ensure brisk acceleration.

The Golf also offers a Driving Profile Selection that allows drivers to choose between Normal, Sport, Eco and Individual settings. Each mode alters the drivetrain’s behaviour, so the car can be “customised” to suit your preferred driving style. 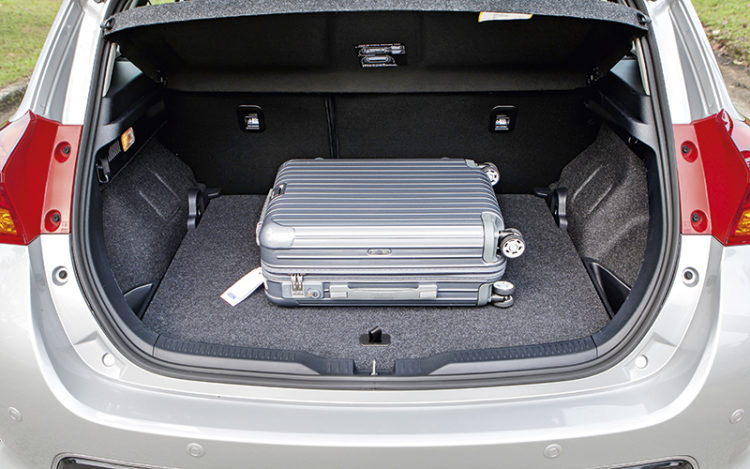 The Auris doesn’t have its rival’s low-end poke, but its 4-cylinder has a wider powerband. Its 132bhp only peaks at 6400rpm (versus the Golf’s 122bhp at 5000rpm), so it provides greater top-end oomph. While the Auris’ CVT isn’t as snappy as the VW’s DSG, it’s even smoother when pottering about and responsive enough in stop-and-go traffic.

On the move, the Golf is more refined than the Auris, with a quiet, well-insulated cabin and a remarkably pliant ride. The Auris, on the other hand, is surprisingly happy being chucked around bends despite not having anti-roll bars (which the Golf has). However, the Toyota’s over-assisted steering lacks feedback and thus discourages sporty driving. 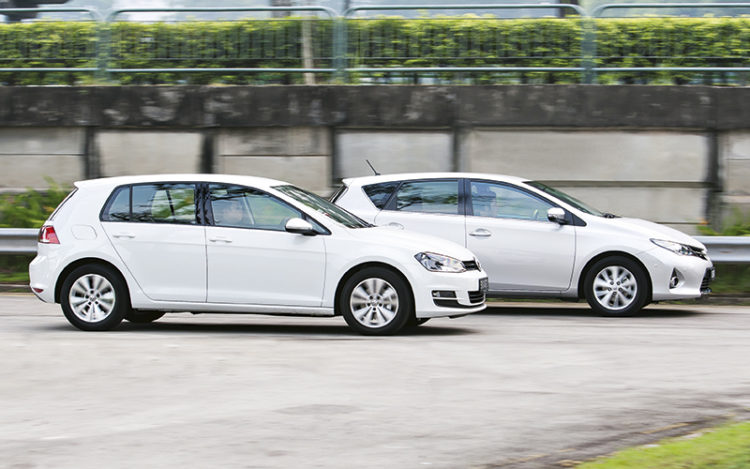 Having to choose between these two competent, cost-effective cars would be a difficult decision to make. The Golf is more attractively priced, but has less on-board goodies as standard. The Auris is better equipped, but as a whole is less practical than the do-it-all Golf.

Our conclusion? The Auris is a nice surprise from Toyota, while the Volkswagen Golf is a good, proven hatchback made even better. 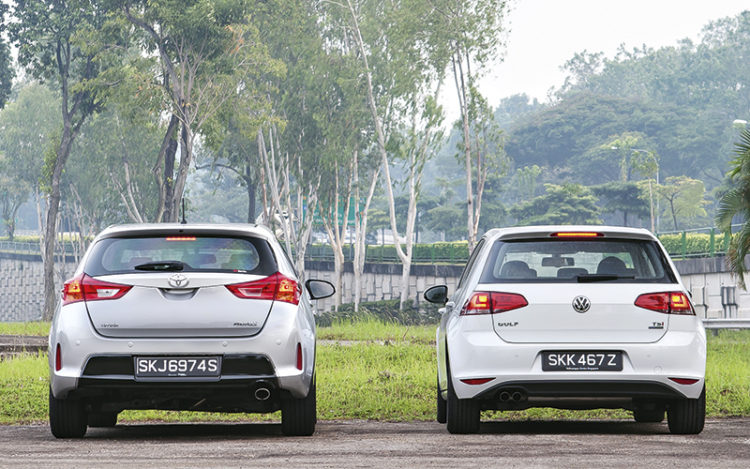 Check out our review of the updated Volkswagen Golf 1.0 here
Read about the latest Toyota Auris here