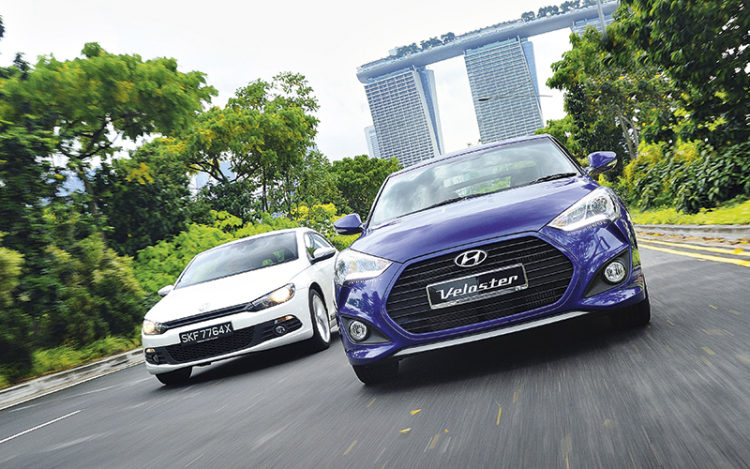 Rebels are constantly squaring off against conformists, optimists are challenged by pessimists, and liberals are ever ready to argue with conservatives. Discord occurs in the automotive world, too, especially when the established players have to face-off against the brash newcomers out to steal their thunder. In this story, it is Hyundai’s new “Gangnam” Veloster Turbo that has the VW Scirocco squarely in its sights.

The Scirocco is a great example of eye-catching yet understated styling. Its serpentine face has slit-like headlamps, but the VW doesn’t even have a grille to speak of. Its flanks are clean, too, while the squat rear end set between those wide haunches gives it the look of a sprinter all poised to dash off the blocks. 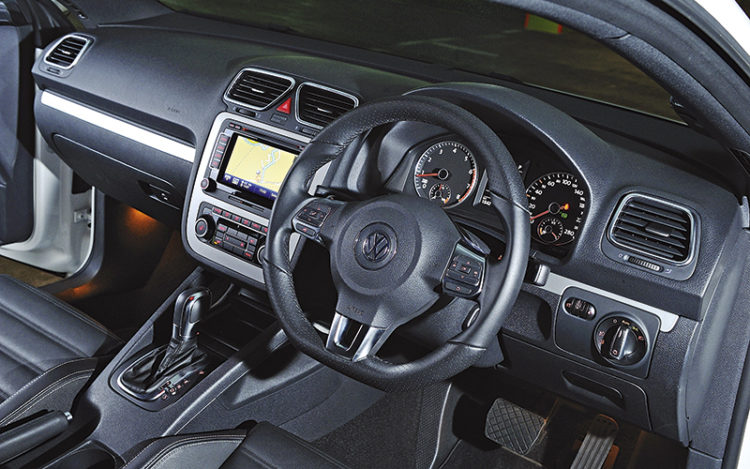 Far from understated is the styling of the Veloster Turbo. It’s Asian and all, but the Veloster is anything but conservative, with every design element screaming for attention. That gaping maw of a front grille, for instance, is similar to that of a whale shark, while the aggressive rear features talon-shaped tail-lights and a striking pair of centrally located exhausts.

What really makes the Veloster unusual is its 2+1 layout – there’s a single door on the driver’s side, and two doors on the other. This asymmetric design aims to give buyers the proverbial best of both worlds – the sportiness of a coupe and the practicality of a five-door hatchback. 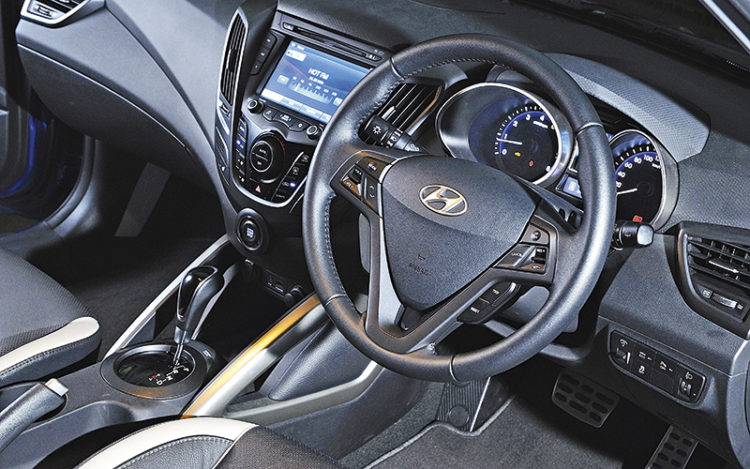 Both cars have cabins that match their racy exteriors. The Scirocco’s subdued cockpit is an example of function over fashion, for there isn’t anything that really stands out, apart from the flat-bottomed steering wheel and the aluminium-like trim around the centre console. This is a proper coupe, however, for its low supportive seating helps the driver feel properly ensconced.

Like in all VWs, the controls easily fall to hand, while the electrically adjustable driver’s seat makes finding the ideal position a piece of cake. But drivers hoping to stream music from their mobile devices will be disappointed, for unlike the Veloster, the Scirocco doesn’t have a standard USB port. Fortunately, the infotainment system comes with GPS navigation, helping “directionless” pilots to get to their destinations fast. 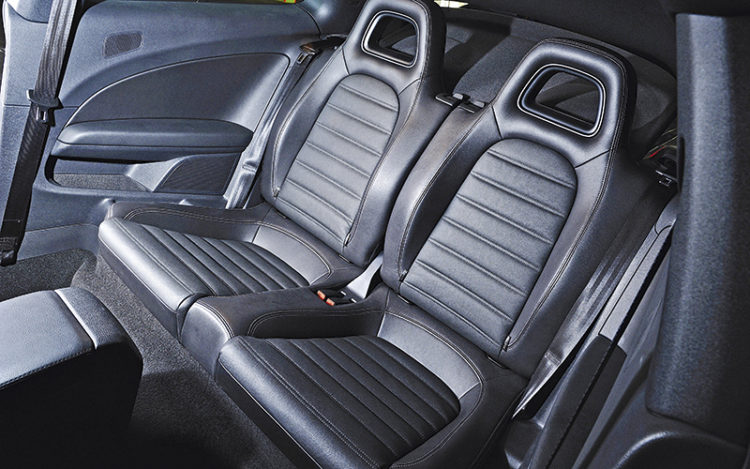 The fixed headrests on the Scirocco’s backseats affect rear visibility.

In the Hyundai, just finding the ignition switch (situated below the air-con controls) could take some time, as the cockpit seems positively alien at first glance. Whereas the Scirocco’s switches have a more uniform layout, the ones in the Veloster seem scattered. Nowhere is this more evident than on the bewildering centre panel.

Equally confusing is the Veloster’s half-electric driver’s seat and flat cushioning, the latter more suited to a regular hatchback than an “irregular” interior that looks out of this world. Disappointingly, the potential of the 7-inch touchscreen (the VW’s is 6.5-inch) isn’t realised fully, as it isn’t equipped with a navigation feature. 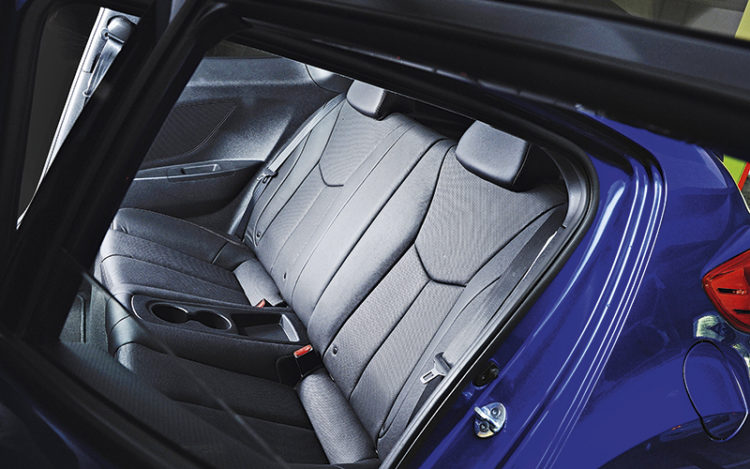 Staying true to the Scirocco’s sporty premise, the rear seats resemble the racy buckets seen in full-blown sports cars, thanks to their frame-style head restraints (the Veloster has the normal adjustable kind). Squeezing into the tiny space back there, however, is more complicated than in the Veloster, which does have that useful extra door. 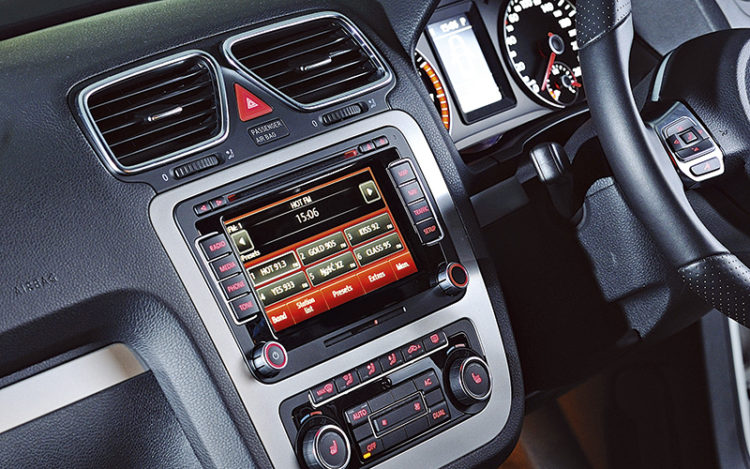 Back seat passengers in the Veloster won’t be experiencing a crunch, for its rear accommodation is more generous than the VW’s. And with minimal intrusion from the Hyundai’s floor hump, it’s actually easy for one occupant to slide over and make room for a second, without anyone feeling particularly cramped. 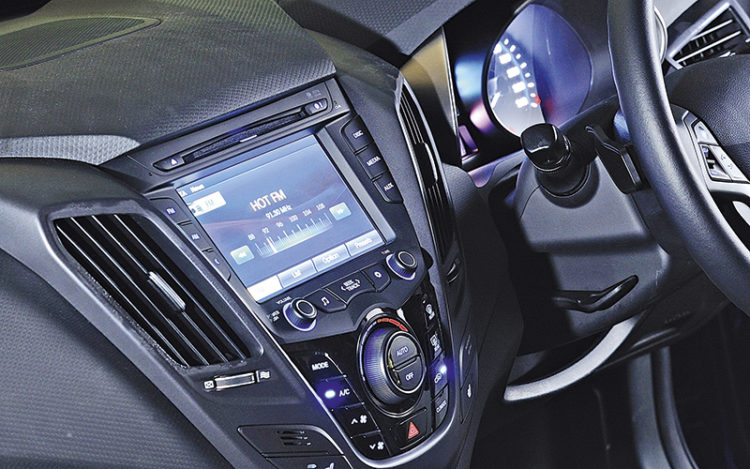 Veloster’s larger and more colourful infotainment display makes the one in the Scirocco seem dated.

The Scirocco, however, is ahead with regard to driving and handling. Although its 1.4-litre powerplant pumps out 160bhp and 240Nm, significantly less than the Veloster’s 1.6-litre’s 186bhp and 265Nm, the driver won’t feel short-changed. In fact, the VW motor is more willing to pull than the Hyundai unit and it feels more pliable, too. This is probably down to its Twincharger technology, in which a supercharger supplements the engine at lower revs and “hands over” boosting duties to the turbo at higher revs. The Scirocco’s punchy performance is complemented by its rapid-shifting 7-speed dual-clutch transmission.

The single-turbo Veloster, on the other hand, needs plenty of revs in order to perform. And it employs a torque converter 6-speeder instead of the non-turbo model’s dual-clutch. The gearchanges are slick but not exactly brisk, and “stepping on it” is less satisfying than in the VW. Not only is the response to throttle input slower, the soundtrack is also nothing special despite those large tailpipes. Having said that, the Scirocco doesn’t sound exciting either, but at least it’s quieter on the move. 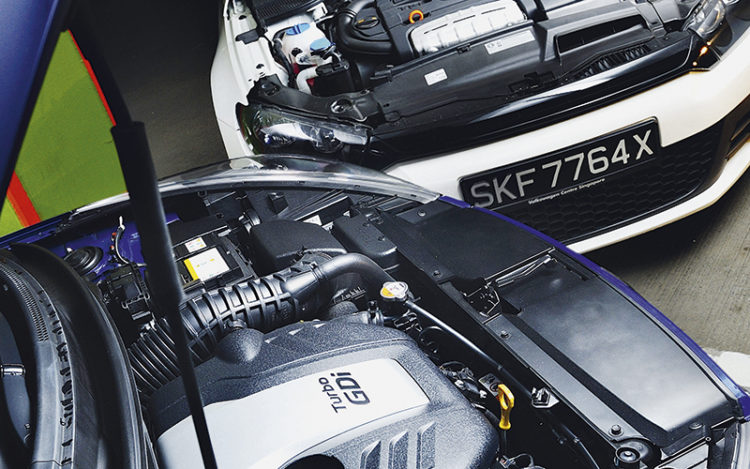 Both coupes match each other’s century sprint times (the Veloster is merely 0.1 of a second behind), but the VW has a slightly higher top speed (which is academic) and better fuel economy (travelling 2.8km further with every litre, on average).

In the handling stakes, the Scirocco is superior to the Veloster, changing direction more keenly and involving the driver more, the latter reinforced by the lower driving position. Although the Hyundai can still “dance” around the twisty bits, it does so in a manner that’s just a little dull. For a car that looks this wild, you’d expect it to be a wilder dancer in corners. 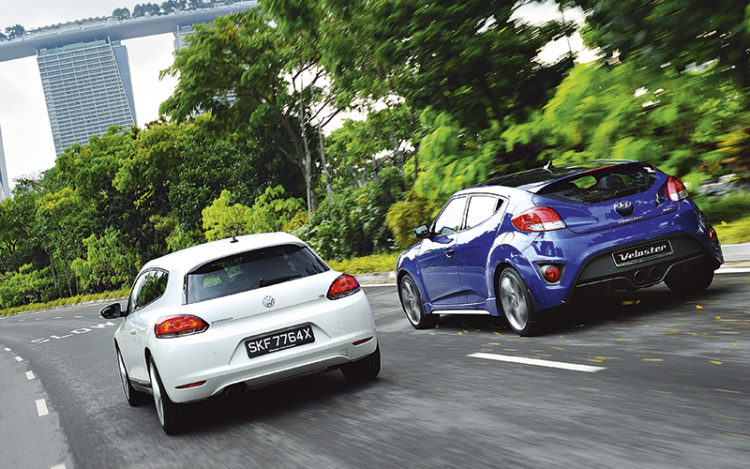 In conclusion, the Veloster Turbo scores with its sensational styling and surprisingly practical cabin, while the Scirocco goes one up with its driveability and dynamics. Even though the Volkswagen is less roomy and its design, less dramatic, these shortcomings are forgotten quickly (literally) once you get behind the wheel and drive away. In this coupe culture clash, “Gangnam” has been beaten by the German.