As a seasoned driver on the road, you’ve seen every traffic sign and encountered every road marking there is.

However, there are some which still confuse motorists.

The following are just a handful of unusual signs which motorists don’t encounter frequently.

Can you guess what each one means?

This is not a Pokemon.

This sign, found on the Expressway Monitoring Advisory System (EMAS), does not depict a Pokemon.

In a rare flash of humour, what it shows is a car lying on its side.

According to the Land Transport Authority’s (LTA) guide, this in fact means “accident ahead on the expressway”.

“Slow down and drive carefully. Beware of stationary vehicles and motorists outside their vehicles on the road,” LTA’s official statement says.

Does not depict candy cane ahead.

Unlike the previous one, this sign will not be on the expressway.

Contrary to what you think, it does not show an extended U-turn opportunity.

In fact, when you see this sign, prepare to slow down and give way to the visually handicapped crossing the road.

“Slow down and stop your vehicle,” is LTA’s official advisory on the sign.

Not a special type of pogo stick.

This road sign is usually seen on smaller, arterial roads rather than main ones.

Looking at this, it’s quite straightforward as to what it is.

Officially, it means “staggered junction ahead”.

“Slow down. Beware of traffic from the right and left.”

These signs warn of possible danger or unusual conditions ahead.

Take extra care and slow down when you approach these signs.

Many of you are familiar with the U-turn sign, but this one seems slightly different.

That’s because it means “U-turn ahead from opposite direction”.

“Beware of U-turning vehicles from (the) opposite direction,” LTA cautions. 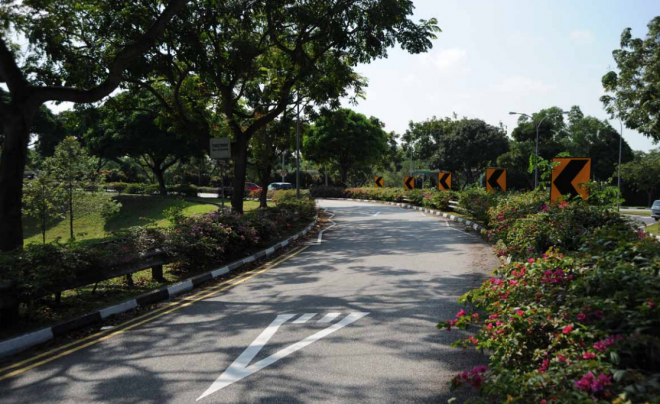 That’s not a robot’s smiley face welcoming you to the expressway.

This one might stump quite a few of you, because it’s definitely the most rarely-seen of the lot.

However, what it really is is the Pedestrian Crossing Ahead Marking, or PCAM, in lovely acro-speak.

The PCAM are inverted white triangular markings painted on the road and placed before selected zebra crossings where motorists have been observed to not give way to pedestrians, such as those after a bend, LTA says.

“The markings come in pairs so as to give ample warning to motorists as they approach the zebra crossing.”

The PCAM complements other advance warnings provided by existing safety features like flashing beacons with black/yellow poles and white zigzag lines by the side of the road.

This particular sign in the picture can be found at the slip road exiting the TPE (SLE) into Pasir Ris Drive 8.

How many did you get correct?