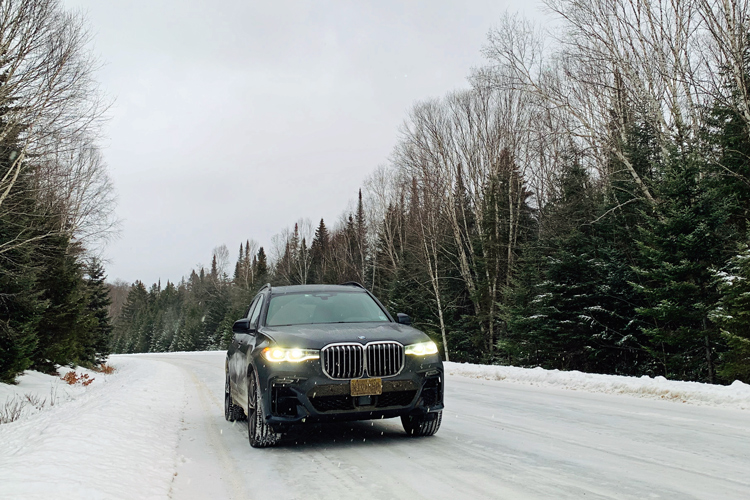 When planning a family holiday, I always try to incorporate a road trip element into the itinerary. Our previous visit to USA had us driving from San Francisco to Los Angeles, along the scenic Pacific Coast Highway.

This time round, we decided to cross borders from USA to Canada.

After a week spent exploring the Big Apple, it was time to trade the subway for a BMW X7 xDrive50i.

The X7 is manufactured in BMW Group’s Spartanburg plant in USA, also known as the home of the X models. The xDrive50i variant is only produced in left-hand drive.

I relished the opportunity to experience a model that isn’t available in the Singapore market. 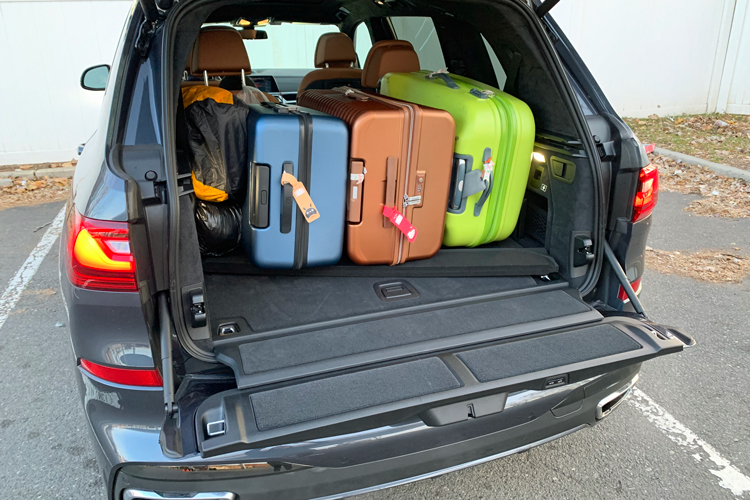 FROM SUNNY TO WINTRY

The first order of business was to load up the luggage. The third-row seats fold down electrically, so all I had to do was press a button. Meanwhile, an optional (but definitely handy) feature called “husband” helped with the lifting.

Fortunately for him, the BMW X7’s air suspension made it possible to lower the sill height by 40mm. The automatic split tailgate also made the whole lift-and-slide operation less punishing on the back.

The boot capacity is 750 litres with the third-row seats folded. This can comfortably accommodate three large suitcases and a duffle bag – with room to spare.

As the Manhattan skyline receded into my rearview mirror, I was looking forward to unleashing the 462hp and 650Nm produced by the V8 powerplant as we joined the highway heading north towards Niagara, Toronto.

The only factors holding me back were the speed limit – a dismal 55 mph (89km/h) – and how often we would have to refuel. Thankfully, petrol is cheaper in this part of the world. 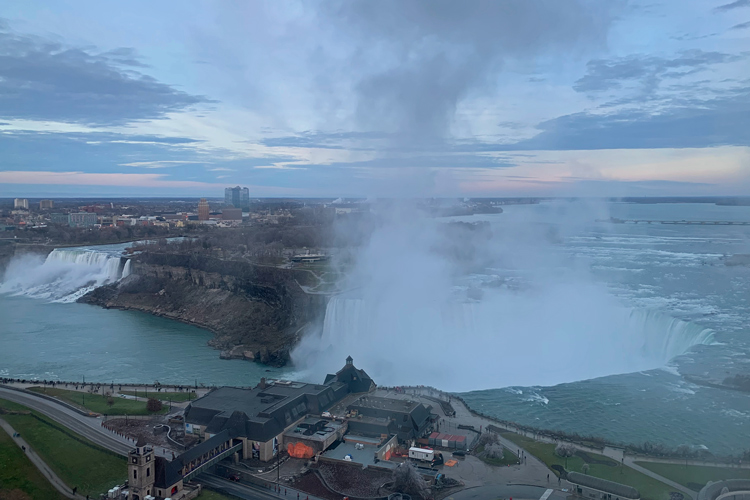 The weather contrast across the border couldn’t have been starker. From sunny blue skies in upstate New York, we were greeted by freezing rain the following day on the Toronto side of Niagara Falls.

While I had to keep my fingers crossed that the boat tour to the falls would remain operational despite the weather, prior experience with BMW’s xDrive intelligent all-wheel-drive system has proven that I could count on the X7.

And the X7 did not disappoint. I throttled tentatively at first, testing the icy roads. The car felt surefooted despite the slippery conditions and this gave me the confidence to keep pushing.

A rear-biased set-up meant that I could still enjoy the thrills of winter driving without feeling as if my heart was going to spill over.

Nevertheless, I was glad to arrive in Downtown Toronto where we would spend the next three nights. Here, I faced a challenge of a different sort. 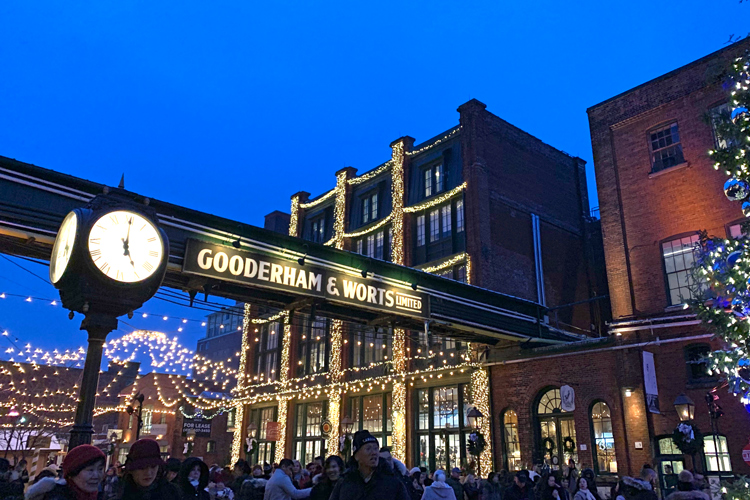 Wherever I went, I felt like I was Gru towering over the minions on the road.

In North America, however, where everything from food portions to apparel sizes is upsized, the BMW X7 felt right at home. At times, it even felt dwarfed by the likes of Chevrolet Suburbans and GMC Yukons.

In the city though, the height limits of parking garages proved tricky. I have had to make detours or circle a few blocks in search of surface parking or covered car parks. The height clearance had to be at least 1.9m after factoring in the roof rails.

However, parking woes were overcome and soon forgotten when we were rewarded with some interesting sights. 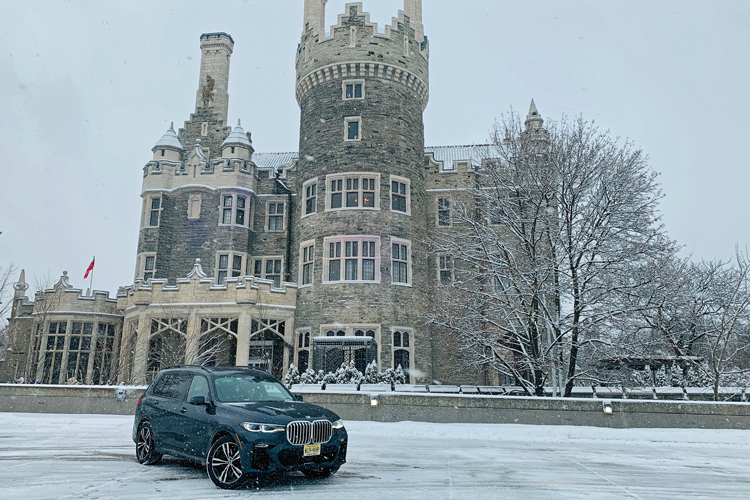 At Casa Loma, North America’s only full-sized castle, where movies such as X-Men and The Tuxedo were filmed, we discovered a 1922 Ford Model T belonging to castle owner, Sir Henry Pellatt.

A four-cylinder, 22hp Maxwell Model Q from 1910 served as a reminder just how far automobiles have come in just over a century. 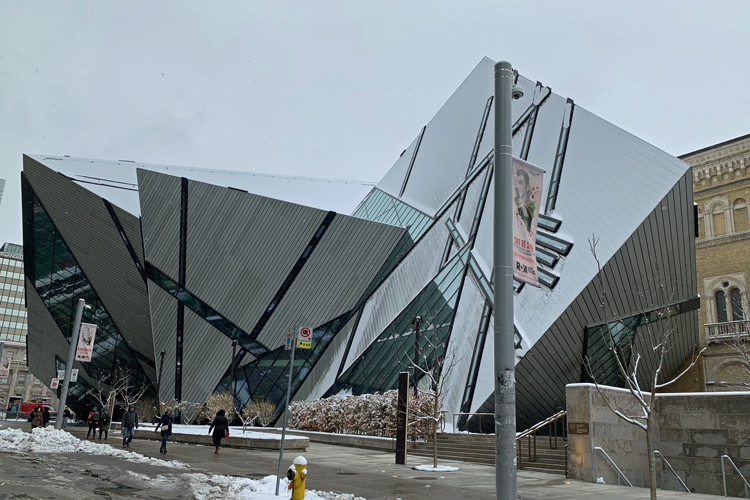 The Crystal, designed by Daniel Libeskind.

I couldn’t leave Toronto without checking out a few buildings designed by renowned architects. These included The Crystal by Daniel Libeskind and Ludwig Mies van der Rohe’s only building in Toronto, the Toronto-Dominion Centre.

Our last evening in town was spent at the Distillery Historic District’s Christmas market. The giant Christmas tree, carolers and stalls lining the cobblestone streets really got us into the festive spirit. 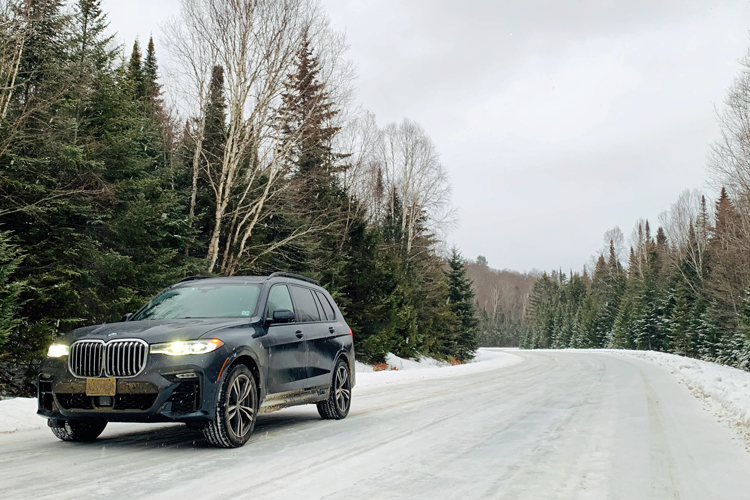 The 600-plus km journey from Toronto to Mont Tremblant National Park would take us from the Canadian province of Ontario to Quebec.

This close to eight-hour drive, including a lunch stop in capital city, Ottawa, made me appreciate features that I normally disable or find less useful when driving in Singapore.

Almost every other new vehicle now comes equipped with Active Cruise Control, which to me, makes little sense in Singapore where journeys don’t usually take more than half an hour.

But when driving long distances, having a Stop-Go system that brakes and accelerates for you really helps to reduce driver fatigue.

One of the first things that I always switch off when hopping into a test drive car is the lane keeping assistant. It annoys me no end because I feel like I am engaged in a wrestling match with the car. 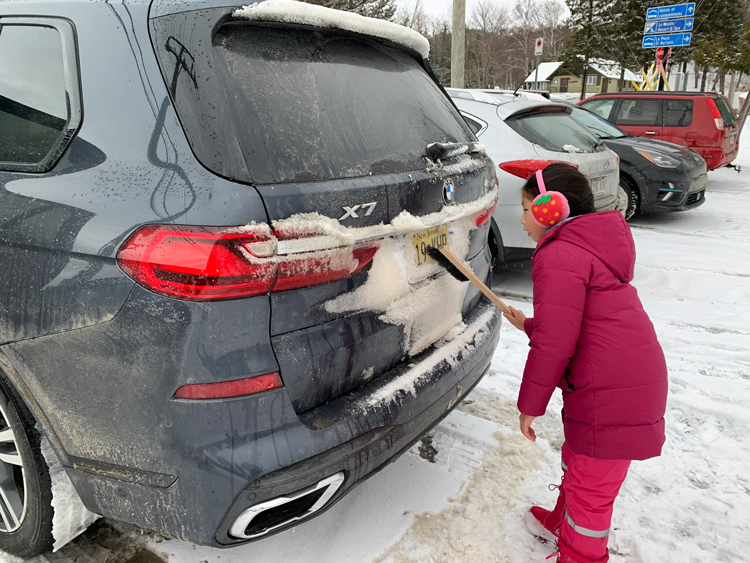 The writer’s daughter helped scrape snow from the car.

It is also unnerving because the car seems to possess a mind of its own, countering my steering, especially around bends.

But under such wintery driving conditions where the roads are icy and the visibility is limited by snowfall, the X7’s Lane Keeping Assistant, which is part of the Driving Assistant Professional package, is really useful.

Together with the steering and lane control assistant, it really took some of the stress off winter driving.

Here’s a secret tip: The very sensitive hands-on-wheel detection meant that I only needed to keep a few fingers in contact with the steering wheel without triggering the warning blinking lights.

And if the cockpit camera ascertains that I am paying attention, I can go without touching the steering wheel for up to 60 seconds. (Disclaimer: Always keep your hands on the wheel!) 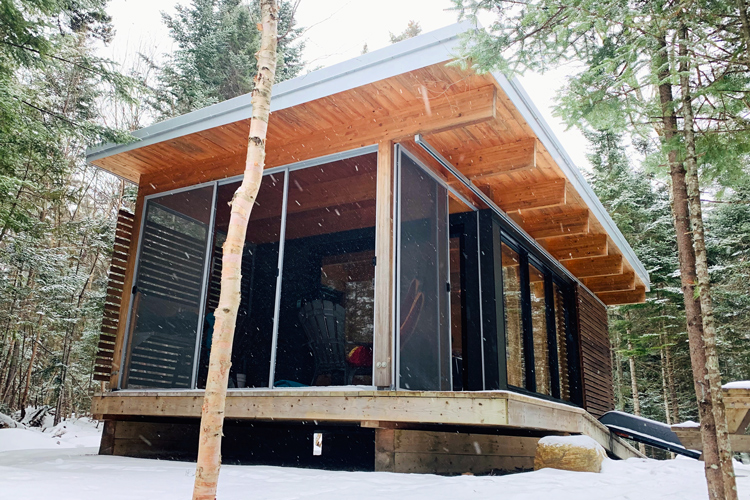 The writer and her family stayed at this cabin in the woods at Mont Tremblant.

Another feature that I deactivate without fail back home is the Eco Start/Stop function. I don’t like the air-conditioning switching to fan mode, for I need every bit of cool air in our weather.

But in subzero temperatures, I really don’t mind, especially if it also helps with fuel economy.

But the X7 feature that I love best and appreciate the most is the optional Cold Weather Package. This includes not only the usual front and rear heated seats, but also heated front seat armrests and a heated steering wheel.

Imagine climbing into a snug seat, wrapping your hands around a toasty steering wheel and occasionally resting your arm on a warm armrest. It’s like a cup of hot cocoa on a cold, winter’s day. 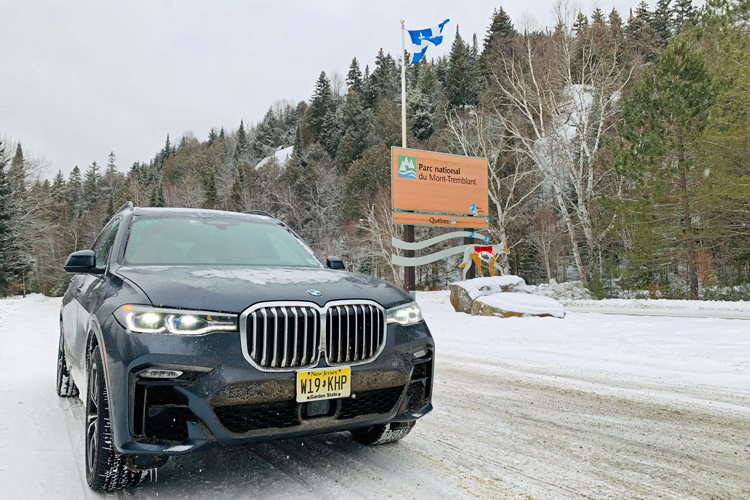 Just once did it get slightly carried away and did a little wiggle. Well, maybe it was the driver who got carried away.

“You are very brave coming out here in these conditions” is not something that you want to be hearing from the staff at the Mont Tremblant Visitor Centre.

But then again, he didn’t know we had just the right vehicle for it.

I enjoyed my time in the backseat as much as I did in the driver’s seat. When the husband took over driving duty, I snuggled into the “Captain’s Chair” beside our daughter.

The two individual comfort seats in the second row with a space in-between is a first for a Sport Activity Vehicle (SAV). We had no need for easy access to the third row as there were only three of us.

So, the nook in the middle served as a practical place to stash my handbag and her backpack, or a bag of snacks.

When it was time for me to drive again, I found myself almost reluctant to get back behind the wheel. Almost, for the call of the V8 beckons. 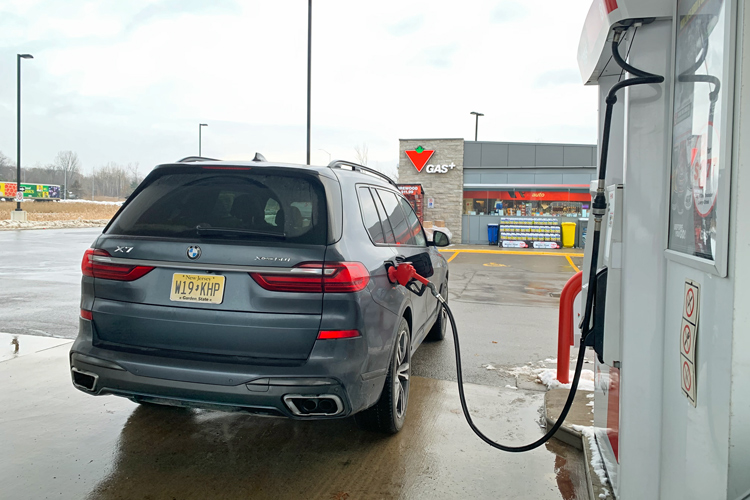 Big SUVs with big V8 motors can be thirsty. Fortunately, petrol is cheaper in this part of the world.

BYE TO THE “BARGE”

Our next stop in Montreal included a brief visit to the Circuit Gilles-Villeneuve where the F1 Canadian Grand Prix is held. It is located on the manmade island of Ile Notre-Dame in the middle of the St. Lawrence River, which was created for the 1967 World Fair.

The Expo 67 in Montreal was where Alfa Romeo introduced a concept car that was named after the city. It was also the inspiration for naming our pet Boxer.

We also couldn’t leave without visiting the Biosphere Environment Museum. Its geodesic dome was designed by Buckminster Fuller and it housed the US Pavilion during the Expo.

We finally arrived back in New York City after driving 1568 miles (approximately 2523km) over eight days. It is a road trip that will be fondly remembered for quality time spent with loved ones, discovering new experiences and reconnecting with nature.

And the X7 makes a perfect road trip companion, combining the luxury of a BMW flagship with the versatility and agility of a BMW X vehicle. We will cherish that reassuring feeling of battling the elements while safely cocooned inside the X7.

Till our next road trip! 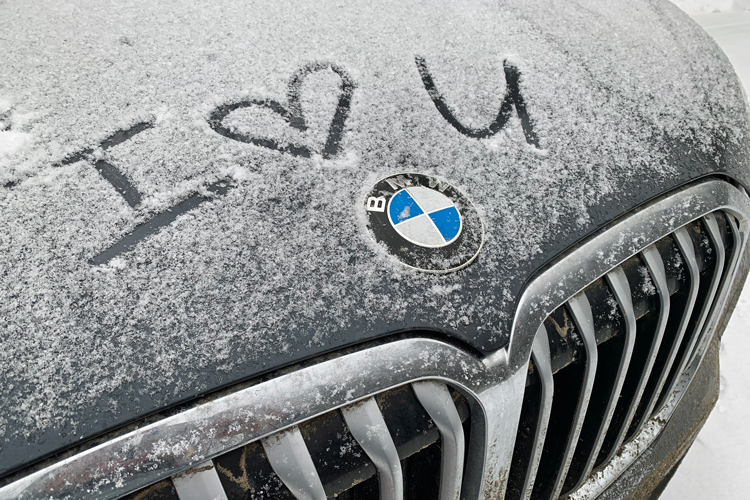