After a long drive on the highway comes a moment of sudden fear – a traffic jam behind the next curve. Once you’ve reached your destination later on, there’s no parking anywhere in sight. These days, this is everyday life behind the wheel.

In fewer than 10 years though, there will be completely new possibilities – highly automated driving will ensure relaxed highway travel, cars driving ahead will send advanced warning of slowing traffic, and your own vehicle will ease off the throttle before a dangerous situation can arise. At the end of a journey, navigational devices will guide the driver directly to a free parking area or the car will even find its way through the parking garage completely independently.

With the integration of cars into the Internet, this vision is not science fiction but becoming reality. The study “Connected Car Effect 2025” by Bosch and the consulting firm Prognos investigated more closely what this trend will mean specifically for the US, Germany and the major cities of China.

The findings: safety systems and cloud-based functions can prevent around 260,000 injury accidents, save 390,000 tons of CO2 emissions and offer drivers many hours of more time for other activities.

According to the model calculations, the Electronic Stability Program (ESP), for example, will be available in up to 90 percent of all vehicles in the three countries covered by the study by 2025, with sensor-based automatic emergency braking and lane assists in up to 40 percent of the car fleet. Systems for more comfort and connectivity will also be found in the majority of cars – in 2025, for instance, smartphones will be integrated into approximately every other vehicle’s infotainment system.

The increasing number of such systems and their increasing connection to the Internet make them far more than the sum of their parts – for everyone involved. ESP sensors will report upcoming sections of icy road, cameras will collect data on speed restrictions and weather conditions, functions such as Internet-based parking solutions and wrong-way driver warnings in virtually real-time will be in widespread use.

For the study, Bosch and Prognos have produced calculations for the US, China and Germany. Here is a selection of the individual findings:
• Over 260,000 accidents involving personal injuries (US: 210,000, China: 20,000, Germany: 30,000) will be avoided annually – as many accidents as would occur within two years in Germany’s capital city of Berlin.

• Up to €4.3 billion in material and damage costs will be saved by connected assistance systems. These sums mean considerable savings for insurance companies, hence keeping a little more money in the wallet of every individual vehicle owner. Of the €3.6 billion attributable to potential savings in the US (China: €380 million, Germany €450 million), smartphone integration alone will contribute over €610 million.

• Approximately 70 million driving hours will be shed by connected parking functions in the US, China and Germany. That is as many hours as 40,000 employees work in a year.

• Nearly 400,000 tons of CO2 will be spared thanks to connected mobility functions – as much as the Black Forest national park in Germany can process in three years. Concepts such as community-based parking and active parking lot management will reduce parking traffic by up to 380
million kilometres, while highly automated driving saves additional fuel.

• 31 hours of free time on the highway: US citizens spend 43 hours per year on freeways (China: 26 hours on expressways, Germany: 39.5 hours on autobahns). Highly automated driving and simultaneous Internet connection will make free around 80 percent of time behind the wheel to be used for something other than driving: reading, emails, video conferencing, films, for example. Frequent drivers who do 40,000 kilometres of driving a year could benefit from 95 extra hours of productivity during their journeys. 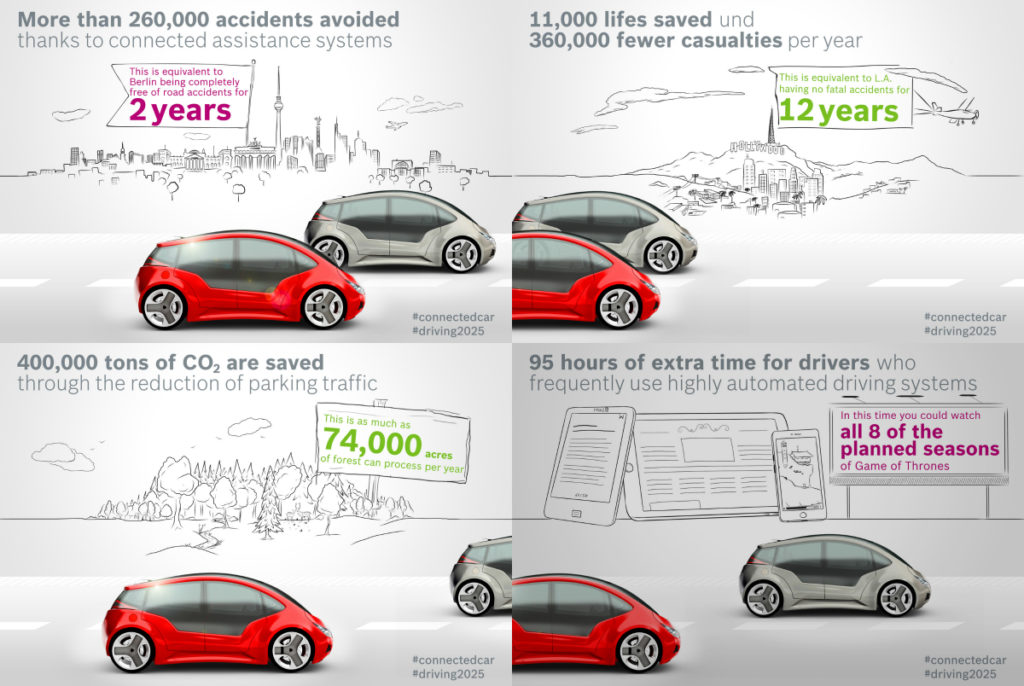 Take a look at Hyundai’s roadmap for connected cars. 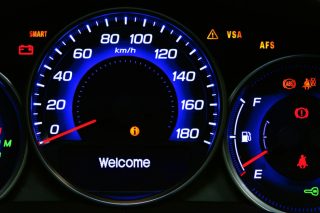 If my ESP warning light is on, is it a serious problem?

If my ESP warning light is on, is it a serious problem?