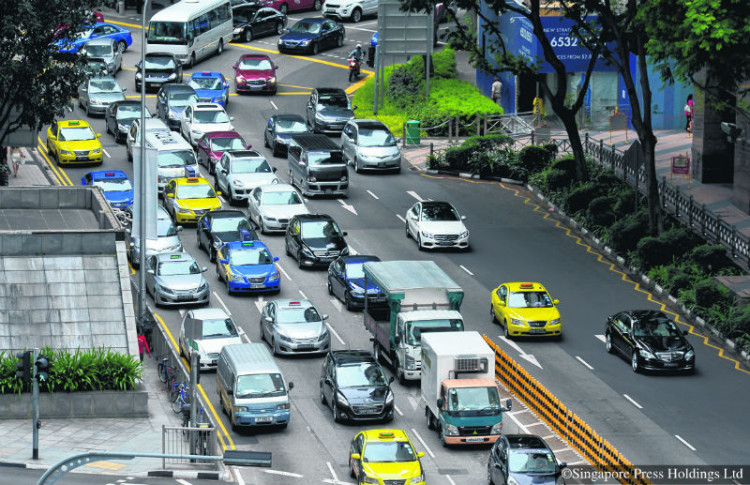 An aerial view of traffic along One Marina Boulevard on March 22.

There are three routes to get to the office from my home. Early last week, I decided to take the one that my GPS navigation device categorises as “shortest distance”.

Five minutes into my journey, I found myself stuck in a traffic jam. Vehicles stretched ahead for as far as I could see. My heart sank and I felt a familiar sense of irritation crawl up my neck. Just my luck, I grumbled to myself, rolling my eyes.

I wasn’t late for work, but I was in a hurry. There was plenty to do at the office and I wanted to get there as quickly as I could. As my car inched along, I grew more exasperated – with myself and with the situation.

Why hadn’t I just taken my usual route, I fumed. It might be further but at least there wouldn’t have been a jam. Why was I so stupid to try something different?

By then, I saw that the cause of the jam was roadworks.

My annoyance found a new target – why do repairs have to be done when people are heading to work? Why weren’t there signs earlier so people could have had a chance to make a detour?

Alone in my car, I huffed and puffed away. I managed to get out of the jam after 15 minutes. The road ahead was gloriously empty. My irritation disappeared.

It was then that I had an epiphany.

Why did I behave the way I did? Why did I let myself be hijacked by a situation that was beyond my control? Why did I allow myself to lose my cool?

There was no way I could have known there was going to be a jam. It wasn’t like I had deliberately sought out the worst route, so why was I beating myself over it?

It also wasn’t like I was the only one “suffering”. There were hundreds of other motorists in the same fix.

It wasn’t even a bad jam. I was stuck for all of 15 minutes, not 15 hours. Why get hot and bothered over something so trivial? It didn’t matter if I arrived at the office 15 minutes later. No-one would notice or care.

And why was I “blaming” the roadworks? Roads have to be repaired – it wasn’t being done to annoy me. Yet here I was, taking it personally and stressing over such a minor thing.

Stress, as we know, can affect our health in a bad way. Feel it frequently enough and it can wear down our bodies, increase our blood pressure, weaken our immune systems, make us more susceptible to illnesses such as influenza and the common cold, and even lead to heart attacks.

Researchers say that while very stressful events – like sitting a major exam – can raise stress hormones, so too can more mundane daily irritations.

While these are smaller spikes, they happen more regularly and can have a cumulative effect. Yet, every day, some of us allow ourselves to be vexed by little setbacks which are beyond our control.

For me, it happens at the supermarket when I join a queue that looks like it will move quickly, but get held up by a customer in front who fumbles for his credit card, or who has picked an item with the price tag missing, which means the cashier has to leave her station to get the price.

It happens when I’m driving out of a carpark and some driver in front has forgotten his CashCard and holds everyone up while he sorts it out.

What else leaves me silently seething?

Bad weather that spoils an event I’d been looking forward to. Flights that are delayed. Slow Internet connection. Electronic devices that die on me. Elevators that travel very slowly.

Yup, these are first-world problems that, in the context of a world battling horrors and injustices, are such small inconveniences that one should be hesitant to admit to being affected by them – but, I’m sorry, I am.

After the traffic jam incident, I told myself that if I didn’t make an effort to change, I would just be compromising my physical and mental health further.

For a start, I decided that I shall no longer be affected by bad traffic, which studies have shown to frequently top the list of daily life’s biggest cause of stress.

Traffic jams happen whether I’m there or not, so I shouldn’t take them as a personal affront. Feeling frustrated won’t clear the roads.

I could do two things though – I could make the best of the situation when I’m stuck in a jam (like sing to music on the radio, or call a friend to kill the time). And I could try and be mentally prepared for them.

I realised that the key reason traffic jams rile me so much is because I am always cutting it fine. I am too optimistic when it comes to planning my travel times. I don’t factor in things going wrong, and when that happens, I am taken unawares and fume.

The solution is simple, right? Plan better. If I had previously allotted myself 30 minutes to get from A to B, then I should now set off earlier. Old habits die hard, though, and this change requires a mental shift.

Mid-week, I had to go for lunch in town. My office is in Toa Payoh and the lunch was in Maxwell Road, at 1pm. I was taking a taxi there.

Normally I would allow myself 30 minutes to get there, but this time, I thought I’d give myself an extra five minutes.

Traffic was smooth until we hit roadworks along Tanjong Pagar and were caught in a jam. But I wasn’t flustered because I had plenty of time.

The driver then missed a turn, which meant we had to go to a U-turn some distance away, but, again, no problem.

I arrived nearly 15 minutes before lunch. It gave me time to go to the restroom to freshen up and settle down as others arrived. It was a completely stress-free experience.

I’ve read other tips on how to battle life’s daily irritations. Think of the big picture. Adjust your perspective. Be positive. Pick your battles. Make peace with imperfection. Save the angst for the really big problems.

It won’t be easy trying to change, but for health’s sake, I should try.