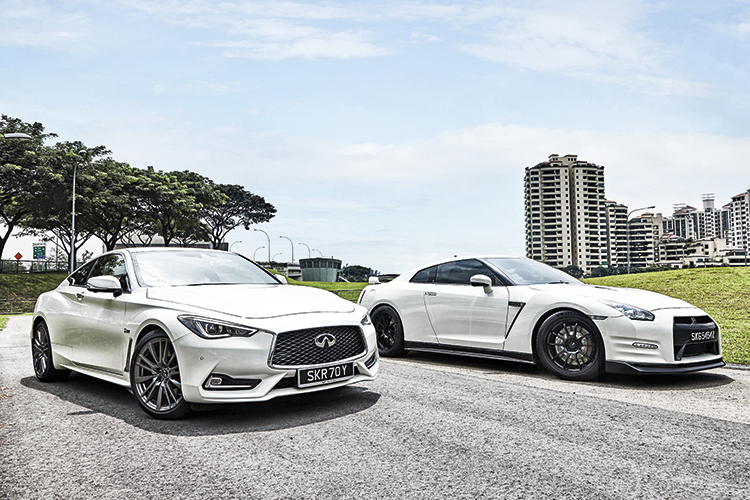 The Infiniti Q60 Red Sport 400 burns your licence like a designer Zippo, whereas the Nissan GT-R burns it like an industrial blowtorch.

The only Nissan that commands the respect of Latio owners and Lambo owners alike is the R35 GT-R, new-era Godzilla of high-performance coupes since 2007 when the 3.8-litre monster made its debut at the Tokyo Motor Show.

Not even a Japanese Fairlady Z who’s a smoking hot race queen on track-day weekends can hold a candle/cylinder to Nissan’s greatest hit. 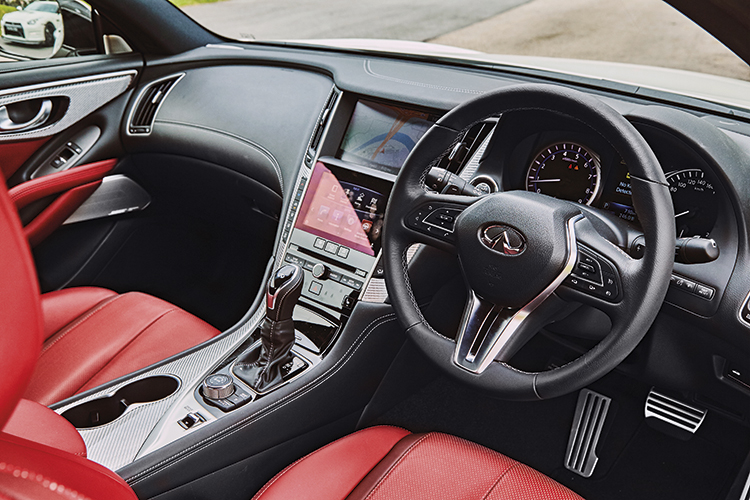 But there were two spectacular distractions in the past decade, which overshadowed the GT-R in the hearts of 100-octane petrolheads weaned on Playstation’s Gran Turismo – the 2010 Lexus LFA and the 2016 Honda NSX.

However, the GT-R remained unbeatable in terms of bang for the yen, because the LFA cost four times more and the NSX cost twice as much, but neither speedster from the Land of the Rising Fun offered a lot higher horsepower per litre (552hp from the Lexus’ 4.8-litre naturally aspirated V10 and 573hp from the Honda’s 3.5-litre turbocharged hybrid V6), significantly superior technology and far more exotic engineering. 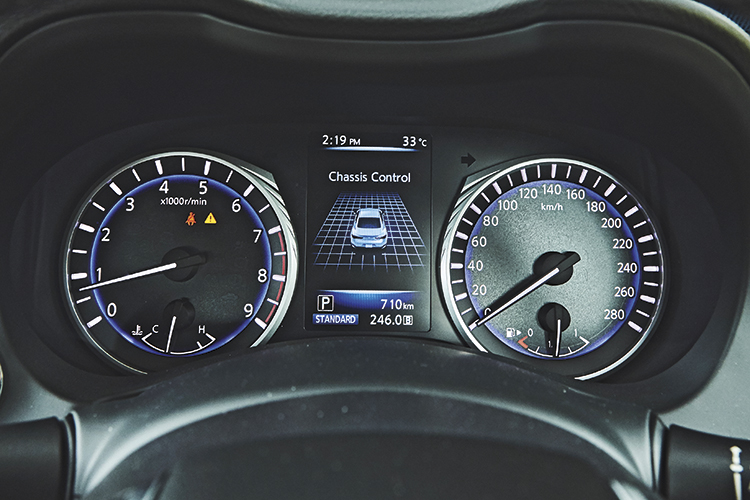 Ten years ago, the GT-R’s bang for the yen and equivalent Singdollar was so fantastic that it sold like hot rice cakes in Singapore. Parallel importers delivered close to 200 new GT-Rs in 2008, at $250k-$270k apiece (depending on the dealer, deal, edition and equipment). Suzuki sold roughly the same number of sub-$60k manual Swift Sports that year!

Tan Chong only started selling the official GT-R in 2009, complete with a three-year/100,000km warranty, factory-approved aftersales support, an additional 5hp and international English for the cockpit systems instead of the PI GT-R’s domestic Japanese gibberish. 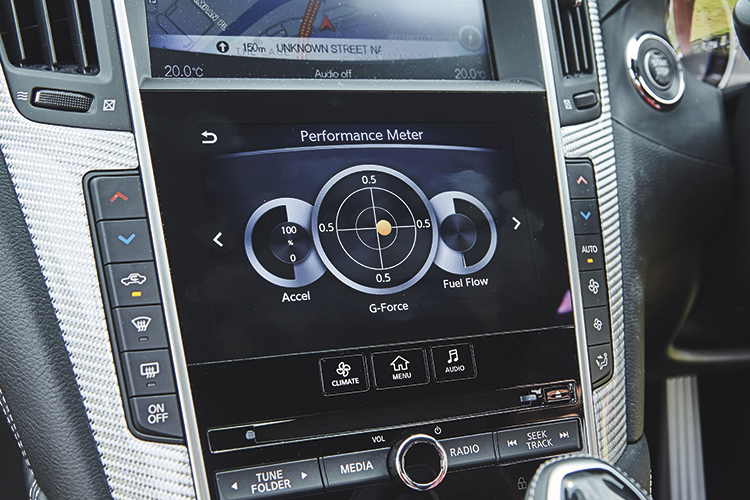 Nine years later in 2018, the first R35 GT-Rs to be registered in Singapore are on the tail end of their COE lifespan. Periodic and very specific updates to the Godzilla of iconic sports cars have kept its performance mind-bending and its handling physics-defying in the past decade, despite a plethora of ever-faster Porsche 911s, plus an increasingly powerful platoon of fast cars from Audi, BMW and Mercedes.

Closer to Godzilla’s hometown of Tokyo, Lexus launched two sporty coupes – the RC F in 2014 and the LC500 in 2016. Both models have the 4969cc V8 firepower to irritate the GT-R, but not quite enough automotive weaponry to outgun it and not quite enough sportiness to outrun it. 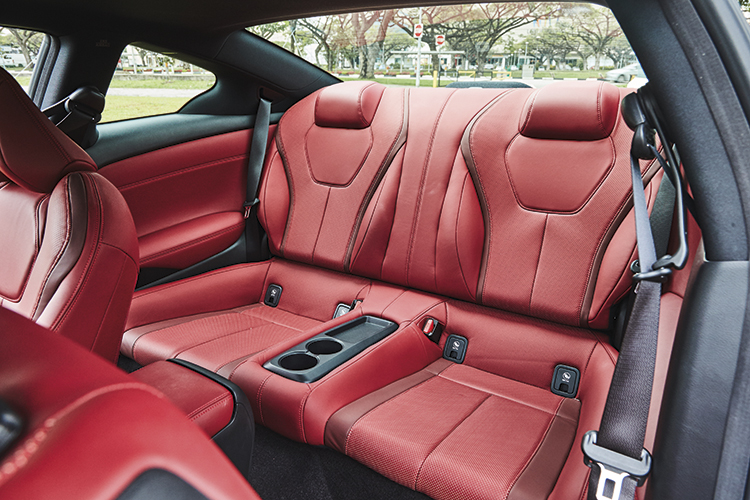 As fate (and LTA’s car taxes) would have it, the quarter-million dollars that bought a new GT-R in 2008 could just about buy something else in 2018 that is also produced in Nissan’s Tochigi plant and also powered by a souped-up V6 engine with twin IHI turbos.

The Infiniti Q60 Red Sport 400 can be regarded as a GT-R lite. Imagine Godzilla wearing a sleek business suit, its breast pocket holding a platinum membership card for an upmarket downtown gym. 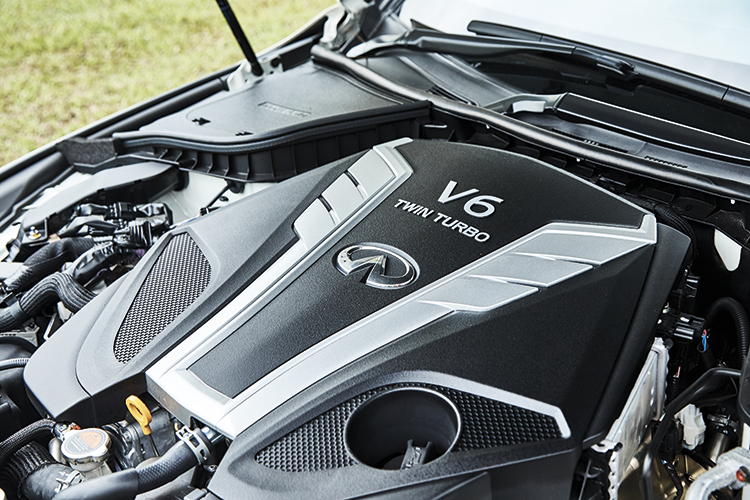 The Infiniti is less muscular than its Nissan sibling but more sculptural, like a work of automotive art done by a contemporary artist with a fancy gallery. 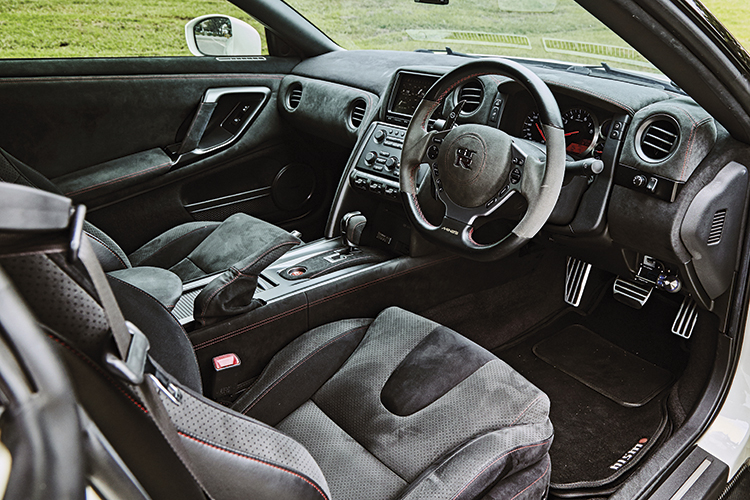 Nissan GT-R cabin is more purposeful and packed with gadgets for the Playstation-playing petrolhead.

In contrast, the GT-R appears to have been styled by a modern samurai with an artistic streak and a wonderful manga collection, who used a special combination of sharp katana strikes and accurate karate chops to create a good-looking machine that still looks good as an 11-year-old.

Put both vehicles on railway tracks and they would qualify right away as private bullet trains. But the GT-R is clearly the faster speeding Shinkansen for the road – the driver can see it in the sweep of the speedo needle and sense it through the seat of his pants. 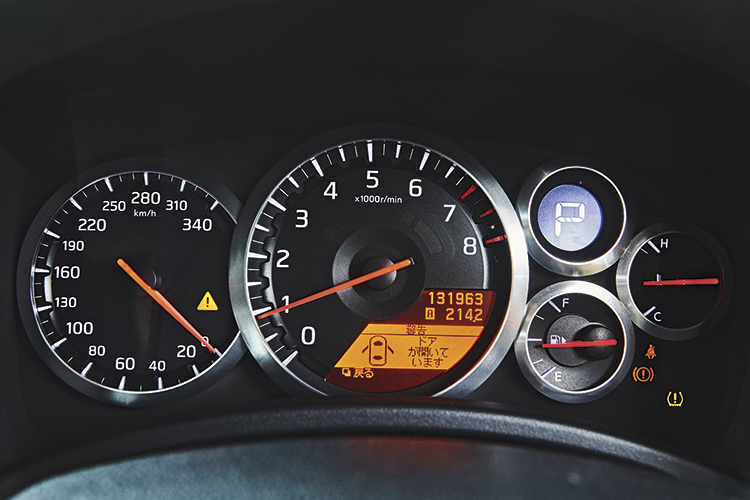 Both are fiery performance cars which can set your driving licence alight in a matter of seconds, but there’s a big difference in how they burn your Class 3 – the Q60 does it like a designer Zippo, whereas the GT-R does it like an industrial blowtorch.

The rear-drive Infiniti is quick from point to point, corner to corner, but its quickness is masked by the slickness of the mechanicals. It’s more a travel-faster grand tourer than a fast and furious number, and it therefore does a better job cruising at a rapid clip than rushing to outpace other coupes with a few hundred horses at their disposal, such as its compatriot here. 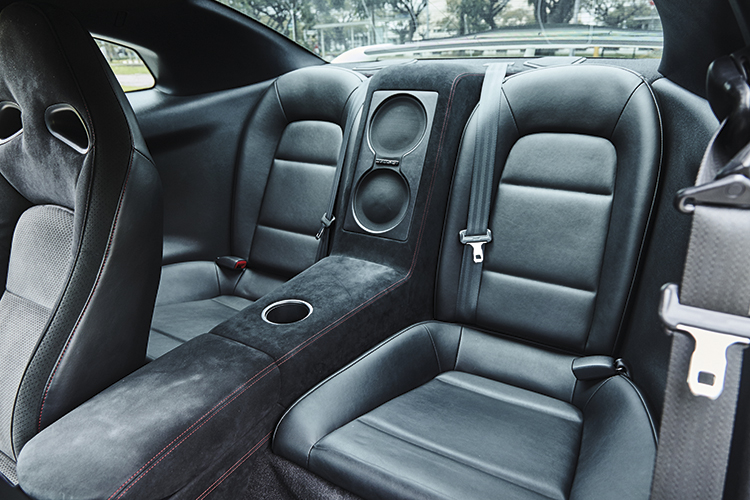 The four-wheel-drive GT-R is a greater performer than the Q60 and pulls no punches. Its engine and gearbox are unabashedly aggressive, unlike the Q60’s passive-aggressive powertrain, and its massive waves of torque arrive like tsunami, accelerating the GT-R driver from zero kilometres per hour to hero of the hour before he has a chance to holler “banzai!”.

There is no reason to shout in the Q60, which has a quieter cabin and a gentler suspension. The only loud things inside the Infiniti are its bright red leather upholstery and Bose Studio 13-speaker hi-fi system. The Nissan has an excellent Bose stereo, too, but its 11 loudspeakers play second fiddle to the rock concert under the bonnet and the quad-pipe boom box under the rear bumper. 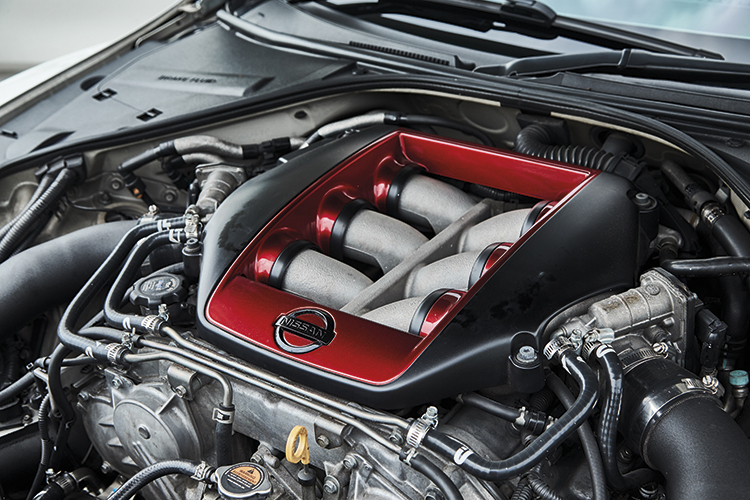 Both interiors are properly assembled and utilise premium-quality materials such as aluminium trim (Q60) and perforated suede (GT-R). Ironically, it’s easier to spot Nissan bits and pieces in the Infiniti-Nissan than in the Nissan-Nissan.

From behind the wheel, the GT-R looks and feels like a civilised Super GT cockpit, while the Q60 cabin is essentially a two-door derivative of the Q50 saloon. 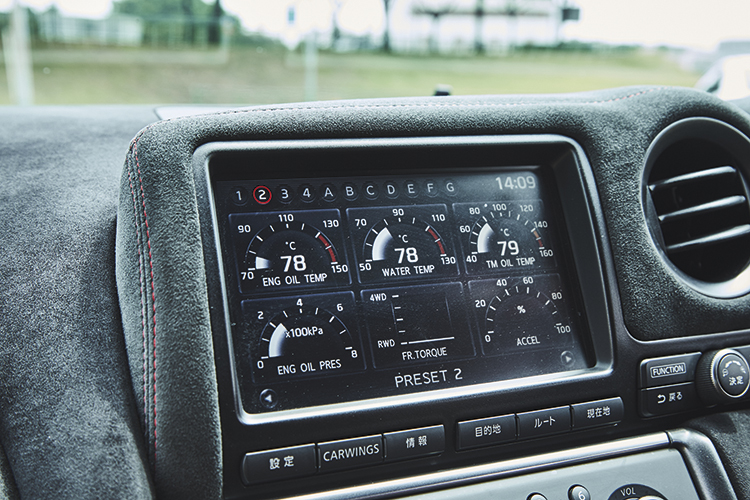 Infiniti’s pair of upscale numbers do share dashboards, displays and switches. The GT-R interior, on the other hand, doesn’t appear to share anything noticeable with cheaper Nissans, which would mean the rest of the model range because the GT-R is more expensive than all of them, including the 370Z sportster and Cimo Hybrid limo.

The front seats of the GT-R are more supportive of thighs and torsos than the Q60’s. However, the Q60 offers plusher seat cushions and easier access to the backseats, which provide noticeably more space and comfort than those in the GT-R. The Q60’s boot is more spacious, too, with 342 litres of cargo capacity versus the GT-R’s 315 litres. 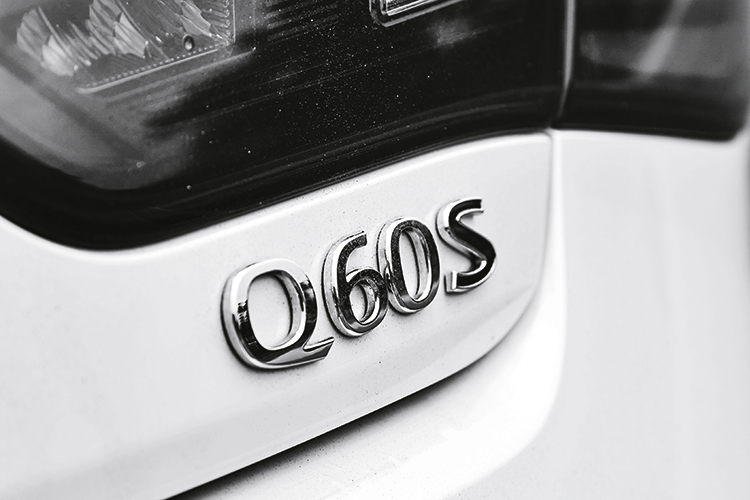 As for onboard gizmos, the GT-R is an amusement park compared to the amusement-arcade Q60, whose toys for boys are limited to a drive-by-wire steering (if specified), multi-mode Dynamic Digital Suspension, potentially confusing levels of infotainment personalisation, and a performance-meter display that can be customised to a certain degree.

Customisable to the nth degree is the GT-R’s multi-function monitor, whose graphics were co-designed by Polyphony, the software company behind the Gran Turismo video game series for Sony Playstation. 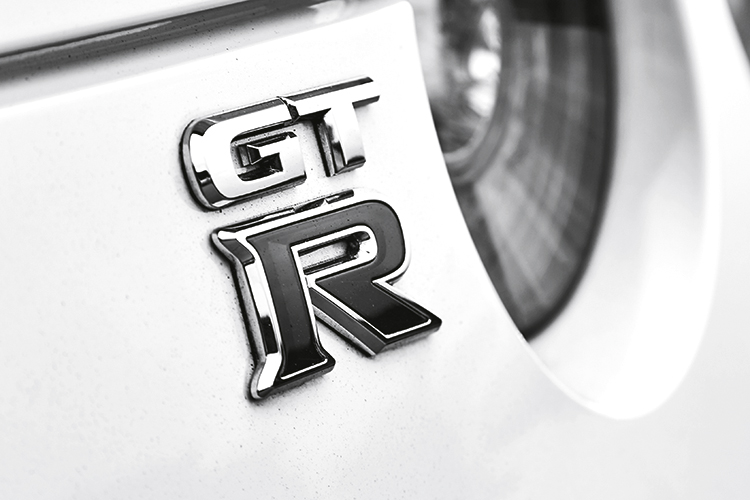 The gamer’s high-stakes gameplay in the GT-R continues with a centralised cluster of rocker switches to adjust the 6-speed transmission, Bilstein dampers and electronic stability control. Flick the switches to tweak the dynamics to your preference – be it pottering about town and admiring the skyline, or plotting the car’s racing lines at Sepang Circuit.

Okay, Godzilla’s visit to Ginza is over. Time for the monster to stomp into its garage and await the next interesting outing. 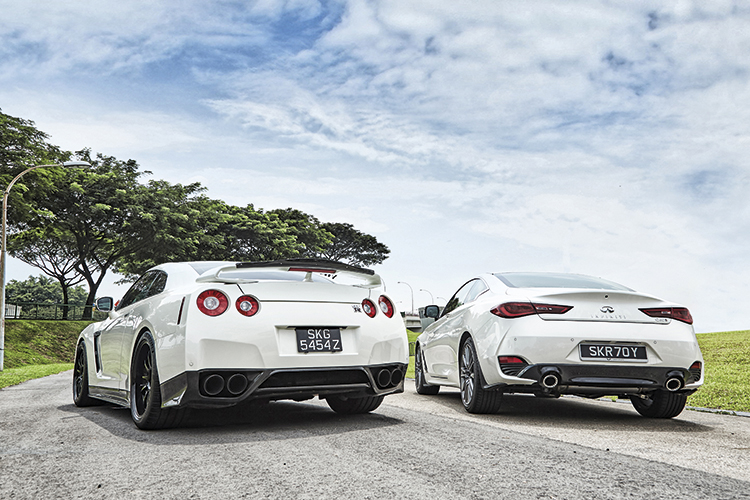 The Infiniti Q60 Red Sport 400 is styled by a contemporary artist with a fancy gallery; the GT-R is styled by a modern samurai with an artistic streak and a wonderful manga collection.

Check out the Infiniti Q60

Mercedes-Benz E-Class Coupe and Cabriolet updated
This site uses cookies to help us serve you better. By continuing to explore our site, you accept our use of cookies.I Accept